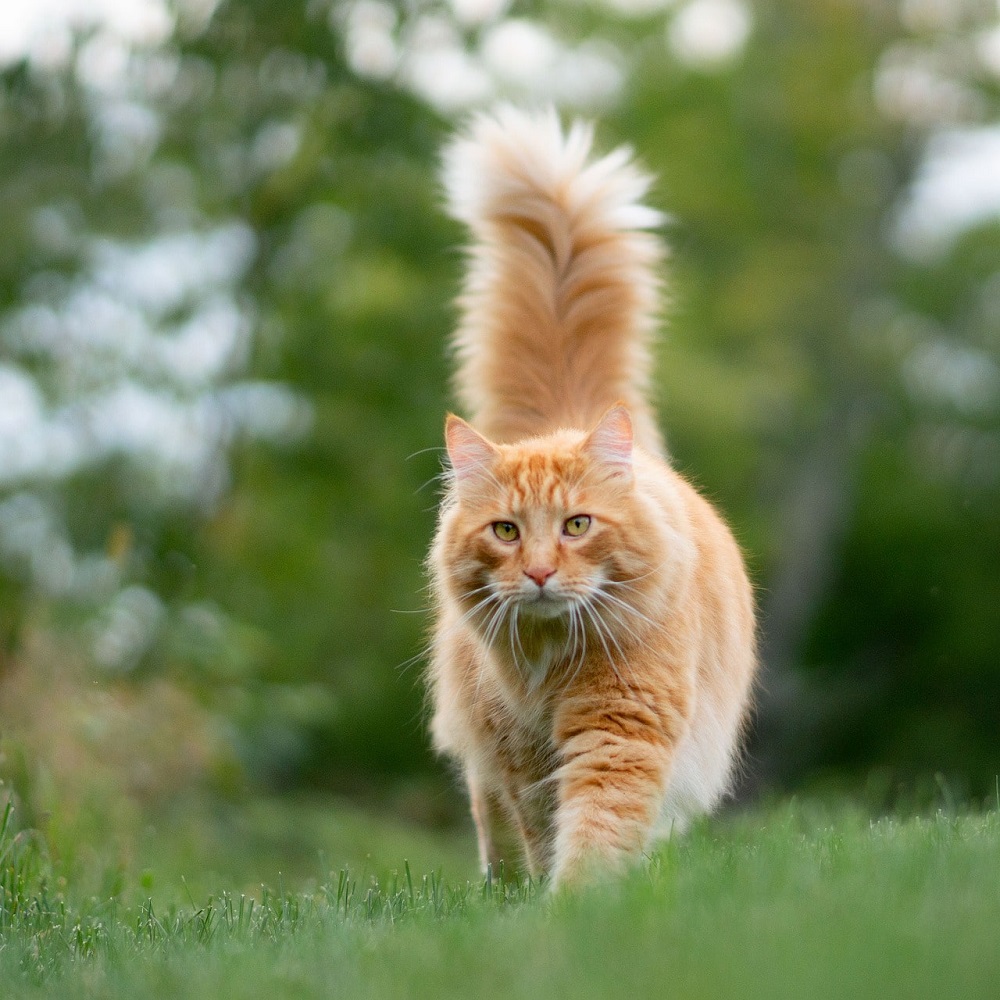 There’s nothing like watching your cute kitty enter the room like royalty with its tail pointed straight and high.

Unlike humans, our cats aren’t able to verbalize their emotions with words, hence how they feel is primarily communicated via their body language.

Why does it mean when a cat’s tail gets all puffed up like it’s full of static charge?

What is your cat trying to communicate to you?

Why Does My Cats Tail Puff Up When I Pet Her?

There can be a wide range of reasons as to why your cat’s tail is pussy when you pet it. Your cat can be feeling anything from happiness to fear or aggression.

Many people who don’t have cats tend to see cats as less expressive than dogs.

Cat’s express themselves in many different ways and the tail is one of them. It is also important to understand what these tail signals mean so that you can react appropriately.

Anatomy Of A Cat’s Tail

A cat’s tail is an important part of its body and an extension of its spine. The cat has 10% of its bones located in the tail. The bones are wider at the base and get narrower towards the tip.

The tail also contains muscle and nerve endings which helps to facilitate movement of the tail.

There are some cat breeds that have longer and fluffier tails like the Maine Coon, Siberian and Persian cat.

There are also some cats that have very short tails like the American Bobtail, the Highlander and the Manx.

What Makes A Cat’s Tail Puff Up?

When a cat puffs up its tail, it is usually an involuntary reaction by the nervous system to an emotion that they are feeling at that moment.

It is similar to when we as humans get goosebumps when feeling excited or fearful.

The process of when a cat’s tail turns from normal to feather duster is called Piloerection.

Piloerection basically means ‘hair standing on end’ which looks that way with the puffed up tail of your cat.

Tiny muscles near the hair follicle on the tail will contract thus causing the hair to stand. It definitely looks more prominent on a cat since they have a lot more hair or fur than us.

It would be weird to look at if it happens to the hair on our heads.

Why Do Cats’ Tails Puff Up When Scared 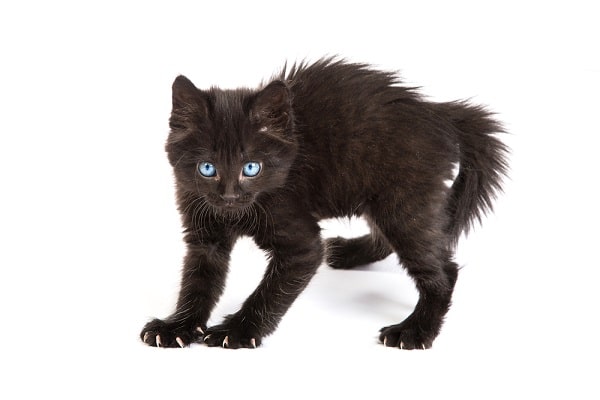 Cats are rather jumpy animals and do get scared or startled by the smallest things at times. It is also an innate survival instinct that helps keep them wary of danger in the wild.

If you have ever seen videos of cats being afraid or startled by a cucumber, you’ll understand what I’m talking about.

When a cat is feeling this emotion, it will automatically puff up its tail. The position of the puffed up tail will also signal a different message.

If the cat puffs its tail and keeps it between its legs, it means that it is afraid of something.

If the puffed up tail is standing tall and erect, it usually means that the cat is in fight mode.

Other body language signs to look out for will be ears folded back, hissing or growling and an arched back.

Cat owners who have cats that are more confrontational or fearless will have their puffy tails standing up and high when angry.

A puffy tail is the sign of an aggressive cat and one that is ready to strike. Chances are the cat will also have its ears folded back, fangs exposed that’s accompanied by hissing or growling.

The fur on its body will also puff up to give the give a larger than life appearance to its’ enemy’.

Most cats would prefer to avoid getting into a catfight but will not hesitate to lash out with their claws or fangs when cornered.

Why Do Cats’ Tails Puff Up When Happy?

Many cat owners always jump to the conclusion that it is a sign of unhappiness or anger when the cat’s tail puffs up.

There are some cats that will also puff up their tail when it is happy and contended.

My friend has a Siberian whose tail becomes a bushy and fluffy waving wand when you pet her. She just lays there purring like a lawnmower looking like a happy cat.

Cat breeds that have longer tails look rather spectacular with their puffy tails.

Why Do Cats’ Tail Puff Up When Playing?

Another time where you will see your feline friend puff up its tail is during playtime. Cats are naturally good hunters and any game or toy that requires them to call on this instinct will the all excited.

You will tend to see kittens puff up their tails when playing but even adult cats do it from time to time when the excitement gets the better of them.

Get your cat toys that they can chase or stalk, like a remote-controlled toy mouse. Even toys with feathers can cause some cats to start chirping and chattering.

Why Do Cats Puff Up And Run Sideways

Probably one of the funniest things you can see your cat do to the point of looking comical.

Not only will some cats puff up their tails when feeling startled or fearful but they will also turn and run sideways.

They do this to appear larger to their opponents and running sideways gives them a chance to get away faster if need be.

What To Do If Your Cat Puffs Up Its Tail?

As cats owners, seeing your cat puff up its tail will happen from time to time.

The first thing to do is to closely observe your cat’s body language.

If your cat is showing signs of aggression, step away and give your cat some time to calm down. If your cat is more fearful than afraid, try to ascertain what is scaring your cat.

Cats can get startled by the silliest things but if that object is causing your cat unnecessary stress, it is best to remove it.

Cats puffing up their tails during playtime is normal and nothing to be concerned about. It is good seeing your cat so excited and stimulated while having fun.