I still remember during my childhood days, being a coward was going to get you called a ‘scardey cat’. I that point in time, I didn’t grasp the origin of the word.

It was only after being a cat owner that I had a moment of eureka. Cats are rather jumpy and on edge at times. When spooked, their reactions are really hilarious. Our feline friends can freak out over the most mundane of things like balloons.

But why are cats afraid of balloons?

Some cats are terrified of balloons because it resembles an unidentified flying object. They are winged predators like eagles and owls that prey on cats. The way a balloon moves and sounds when it pops or deflates can strike fear in our cats too.

Most of us wouldn’t even bat an eyelid when we see balloons unless you are suffering from globophobia which is the phobia of balloons.

In this article, we will be looking at balloons from the perspective of a cat to help many cat owners understand why their kitties have this ‘irrational’ fear.

Is That Balloon Going To Eat Me? 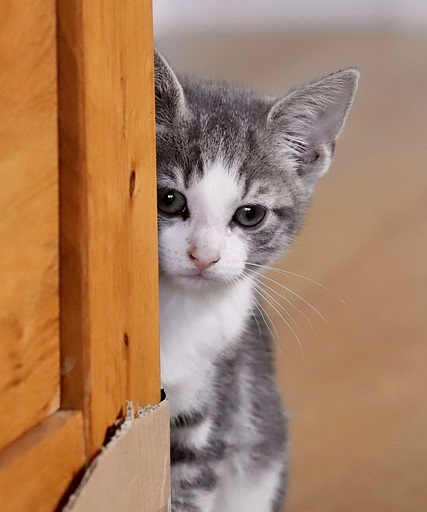 Cats are excellent hunters and have a kill rate of 70% when hunting out in the open. Despite being great hunters, feral and domestic cats aren’t the apex predators in the animal kingdom.

They need to be on the lookout for other animals like wolves, coyotes, eagles and owls who are strong and large enough to prey on cats.

When a cat sees a balloon, the first thought that goes through its head isn’t “Where’s the birthday party?”

Cats do not have the best eyesight compared to other animals so that makes it harder for the cat to realize that the balloon is harmless.

Many cats will see the balloon as a flying predator and start to freak out. They will go hide in a safe place with their tails all fluffed up, ready to fight or flee at a moment’s notice.

The erratic movement of a hovering balloon moving in the air can make it seem like a flying predator circling your cat’s territory or swooping down on it.

The size, shape and color of the balloon also matter. If the balloon is shaped and colored like an eagle, you are going to have one very anxious-looking cat at home.

Is That The Sound Of Death Approaching? 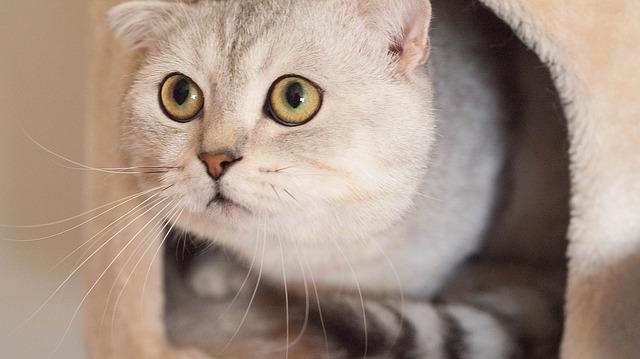 I’m not afraid to admit that I’m not the biggest fan of the way a balloon sounds when you rub against it.

It has that screechy “eeeeeeeeeek eeeeeeeek” sound that makes my hair stand on end. This sounds worse if you are doing it to a heavily inflated balloon that looks like it is going to burst at the slightest touch.

Imagine that you are a cat that can hear a mouse scuttling through an open field more than 100m away. In fact, cats have the largest hearing frequency spectrum in the animal kingdom.

If you have balloons lying about on the floor, you can expect your cat to come around for an inspection.

Given how’s tactile their paw pads are, they can also elicit that horrible screeching sound from the balloon.

The icing on the cake would be if your curious cat pops the balloon with its sharp claws which is the most likely outcome once it lays paws on it.

The sound of a popping balloon is loud to us but for a cat, it can sound like standing next to a bomb being detonated.

If that doesn’t leave an emotional mark, I would be surprised.

When the balloon pops, the popping sound is amplified by how sound travels in a cat’s ear. The cat’s ear canal is shaped like an ‘L’ to funnel sound more clearly to the ear drum.

The sound of bursting balloons not only can get a cat scared, but it can also damage your cat’s hearing.

Try to exercise more caution when your cat is around balloons.

After hearing a balloon pop, a cat can start to associate bad vibes with these strange-looking objects. The sight of one can be sufficient to send your cat into hiding.

The Presence Of Static Electricity 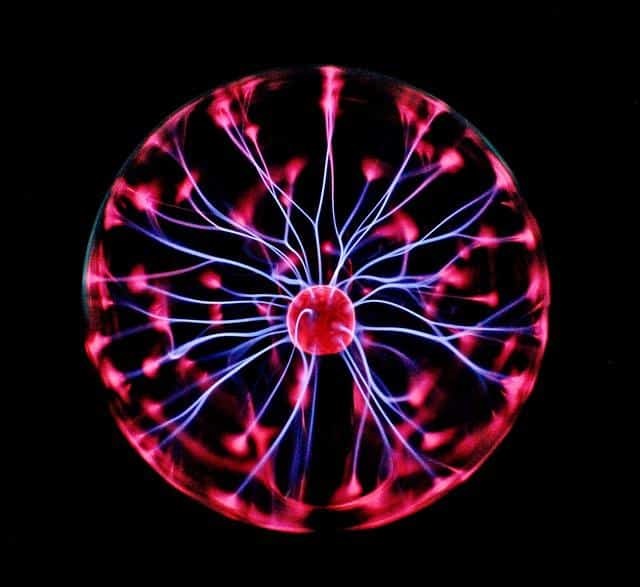 Have you ever touched someone or the escalator handrail and it feels like you’ve been pricked by a needle?

Not all cats are afraid of balloons at first sight especially if the balloons are just lying on the ground.

These balloons can give your cat a bit of a rude shock.

If your cat has been rolling and rubbing itself on the carpet or sofa, it might have built up a negative charge on its body.

When your cat walks past or brushes against the balloons, the transfer of charges from your cat to the surface of the balloon can result in a static electricity shock.

If such a shock can make an adult jump, imagine how uncomfortable it can feel to your cat. Cats aren’t fans of such rude surprises and the sudden shock is enough to trigger a fear response in your cat.

Should I Do Anything About My Cat’s Fear Of Balloons?

It depends on how severe the fear is. Balloons aren’t something we have as a common item at home. Unless you have a home business that sells balloons.

Most cats tend to avoid balloons after experiencing them once or twice. however, if your cat’s fear of balloons is through the roof, you need to take note.

If by any chance you are having a party at home that involves balloons, make sure that your cat is left in a room that is far from the party scene.

There have been reports of pets getting so wound up that they suffer from cardiac arrest. That is the last thing we want happening to your cat or dog for that matter.

It might even be a good idea to leave your cat in the home of a pet sitter or friend for the duration of the party. Only bring your cat back once you have cleared all the balloons.

Are Balloons Safe Around Cats? 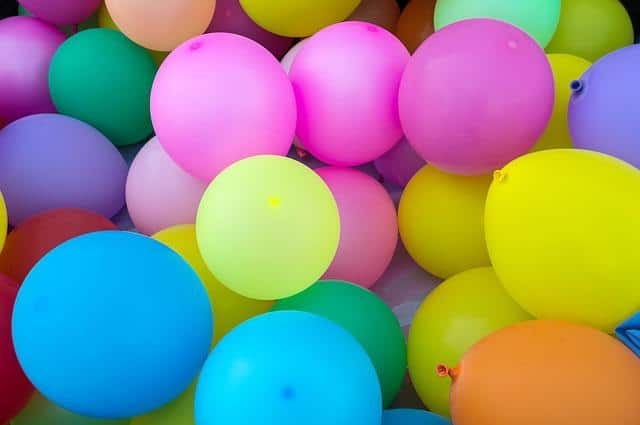 There isn’t any outright risk for cats to be near balloons if your cat has no fear of them. Some cats have no fear of balloons and even enjoy popping them.

Balloons are made from latex or rubber. If your cat is allergic to this material, it would be best to keep your cat away from balloons.

Being close to anything rubber can spark an allergic reaction in your cat. The common allergy symptoms are:

Another risk that balloons can pose is a choking hazard. Some cats might be curious enough to try and chew and ingest the pieces of latex after bursting the balloon.

If the swallowed piece is big enough, it can either choke your cat or cause an intestinal blockage.

When this happens, you need to get your cat to the vet immediately for medical treatment. Any delays can be fatal for your cat.

What Do Cats Fear Most?

I doubt it is possible to list with certainty what cats are most fearful of. All cats are different and what could strike fear in the heart of one cat could easily be brushed off by another.

Here’s a list of triggers that I think should have most cats going into hiding:

Why Are Cats Scared Of Cucumbers And Bananas?

There was a trend not too long ago which involved putting a cucumber or banana behind your cat and flaming its reaction.

It seemed that the majority of cats were freaked out by the sight of a cucumber or banana. I seriously doubt that cats are afraid of fruits or vegetables. But the sight of something weird appearing out of the blue is enough to freak out some cats.

It could just resemble a huge turd from a predator which caused the cat to panic.

Why Are Cats Scared Of Aluminium Foil?

Unlike cucumbers and bananas, there is some proof as to why many cats are not fond of aluminum foil.

Many cat owners will place large pieces of foil on areas where they do not want their cats threading like the kitten counter.

When stepped on, the crinkling effect of aluminum foil produces a sound that is very irritating to cats. It might not seem like much to us but cats are able to hear at a much higher frequency.

The shiny and glossy surface of aluminum foil might resemble a puddle of water to cats. And we all know how much cats dislike being wet.

There isn’t a need to go out of the way to ensure that your cat stays away from balloons. Many cats are able to tolerate the presence of balloons without issues.

My cat is able to sleep next to one without flinching.

The more worrisome issue is for cats who have a habit of chewing on strange materials. Make sure it doesn’t become a chocking hazard for your cat.