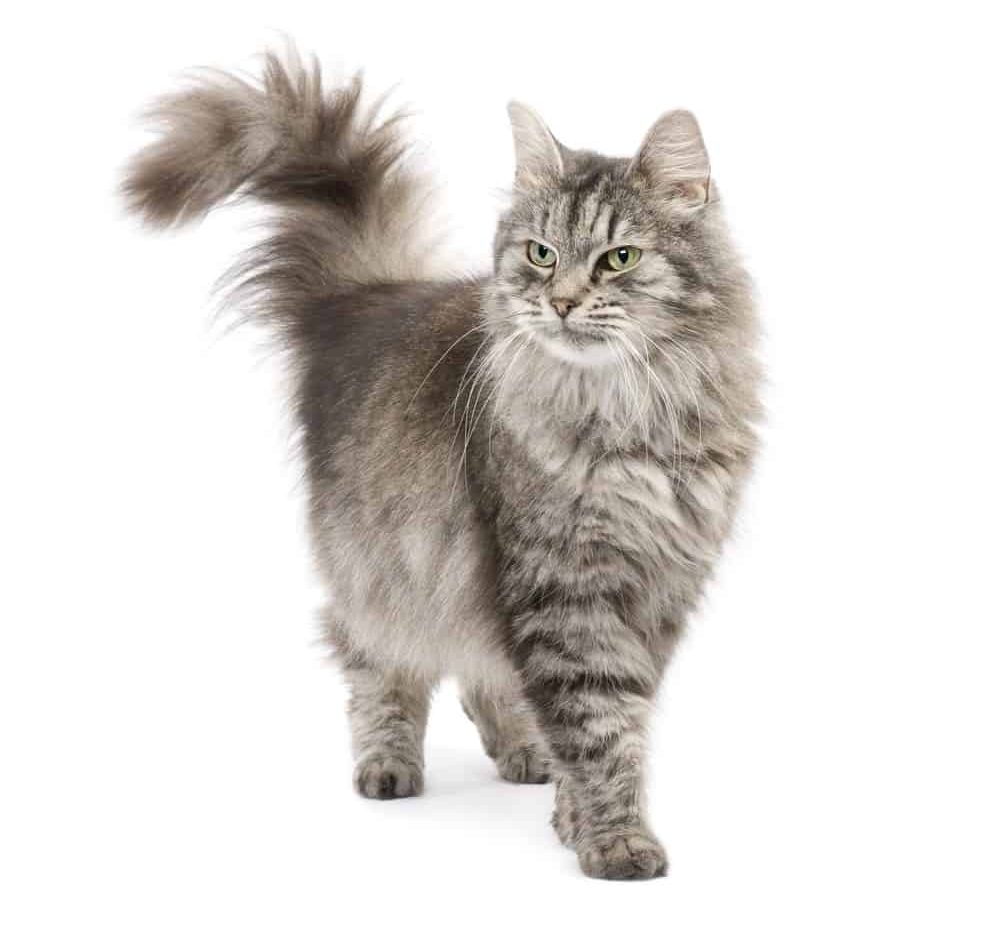 A wise person once said that to really see the intentions behind someone’s words, look at the body language.

Learning to decode and understand your cat’s body language is important because, well, cats don’t speak. Your cat’s tail is a good indicator of the current emotion that your cat is feeling.

What does it mean when your cat’s tail puffs up?

A cat’s puffy tail is due to the involuntary process called piloerection. In some ways, it is similar to humans having goosebumps. Tiny muscles under the cat’s hair follicles will contract thus causing the hair to stand on end. This can happen when there’s a change in the cat’s mental or physical state.

There is a lot that cat owners can learn from just observing their cat’s tail. Once you can grasp what your cat is trying to tell you, you are close to being the next cat whisperer.

Anatomy Of A Cat’s Tail

A cat’s tail is more than just that long or short furry body part that sways about when your cat walks.

Your cat uses its tail for balance when running or climbing on ledges. The tail also serves as a tool for communication with other cats.

The tail is connected to the cat’s spinal column and is made up of bones, muscle, blood vessels and nerve endings. This is why you can piss off your cat pretty bad if you happen to step on its tail by mistake.

What Does A Puffed Up Tail Mean?

Similar to humans, cats can have the ability to feel a spectrum of emotions as well. It doesn’t just begin with hungry and end with sleepy.

Although cats are not able to express their emotions via facial expressions, the tail is a good enough barometer to know if your cat is in a good or bad mood.

A long-haired cat with a long fluffy tail can look rather amazing with its tail all puffed up.

Here are some reasons why cats puff their tails.

Cat Tail Fluffed Up When Playing

Being in a playful mood can make your cat’s tail puff up. Have you ever seen your cat follow you and then run away?

Some cats do that when they are in the mood to play with you.

Your cat is imagining you as a big hairless prey that it is trying to hunt down. Given how great at hunting cats are, it gets them excited to even be in a simulated hunt.

Did you know that many outdoor cats kill their prey just for ‘fun’? Cats do this due to their strong prey drive and to keep their hunting skills in tip-top condition.

This behavior is causing the population of certain wildlife species to drop due to constant hunting by cats. If you have an outdoor cat, let it wear a collar to alert its ‘victim’ of the cat’s presence.

A cat’s tail fluffs up when they are in this playful hunting mood. You can even see your cat running sideways with a puffed-up tail, which looks rather comical.

The behavior is more commonly shown by kittens who have limitless energy and curiosity but even adult cats are known to let the kitten in them out at times.

If your cat puffs its tail and starts running around, play a little hide and seek or a game of tag with your cat.

Cat Is Frightened Or Startled

You know how quiet and stealthy our cats can be at times. My cat just loves to quietly sit behind me when I’m preparing food in the kitchen.

He probably thinks that he’s going to get a snack.

What usually entails (pun intended) is me accidentally stepping on his tail and my cat goes from a relaxed cat into this startled cat with his tail straight up in the air and all puffed up.

Did I also mention that he has this look on his face that screams “Did you just try to kill me??”

If your cat is feeling scared by something, your cat may puff up its tail to show its fear. Many cats are known to be scared of balloons as it resembles a flying predator to them. Don’t be surprised to find your cat fluffing up its tail and running away when it spots one.

Cat Is Feeling Aggressive Or Angry 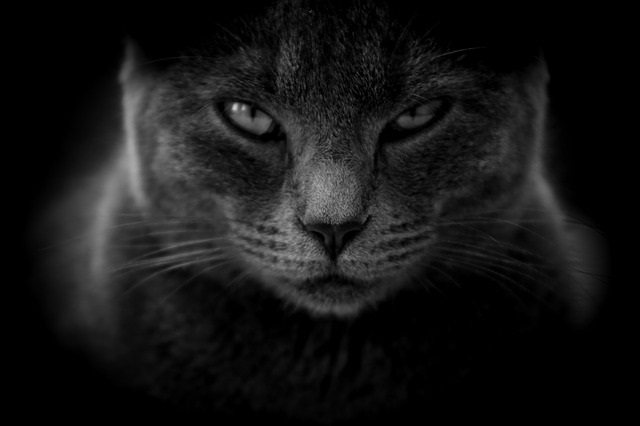 When your cat is feeling pissed about something, puffing up its tail is a natural reaction. A puffed-up tail is the cat’s way of trying to make itself look bigger and more intimidating to its adversary.

An aggressive cat will also show other signs that it isn’t in a mood to be trifled with. If you see this accompanying body language as well, your cat is in an aggressive mood.

The best thing to do when your cat looks angry is to not approach or try to touch it. Doing so can cause your cat to strike at you with its sharp claws or teeth.

Male cats that are looking to mate also be in an aggressive mood. The sex hormone signals the brain to seek out a female cat at all costs.

Many tomcats end up fighting over territorial claims and the right to mate with a female in heat.

Cat Is Being Submissive

Not all cats prefer to deck it out when coming face to face with another cat. There will be one cat who will act more submissive during the confrontation.

This cat will flatten its ears, lower its puffy tail between its legs and lower its head to avoid due contact.

Some submissive cats will even roll over to expose their bellies to show complete vulnerability.

This submissive behavior is commonly seen in households with more than one cat. Even though cats are solitary creatures, there can be an alpha cat that rules the roost so to speak.

Your Cat Is In Pain Or Not Feeling Well 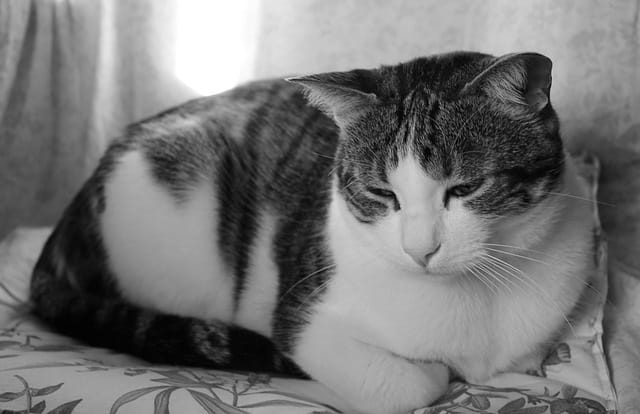 Cats are really good at hiding their pain or discomfort. In nature, an animal that shows weakness will be a bigger target for predators.

If your cat is not feeling well or is in some discomfort, they will be some changes in the way it behaves. Pain can make your cat seem scared of something that you cant see.

You will find your cat hiding more often, being less social and eating less.

If you try to touch your cat, it may fluff up its tail and look angry or startled. Your cat doesn’t want to be touched and it’s telling you so.

What Should I Do When My Cat Puffs Its Tail?

Most of the time, you shouldn’t be concerned about your cat fluffing its tail. It does happen when your cat is feeling playful, startled or even having a bad day.

What you need to be on the lookout for is when this body language is derived from a medical or behavioral issue.

If your cat hasn’t been itself lately and has been puffing its tail, you probably need to take it to the vet for a checkup. There might be a health issue that is making your cat feel uncomfortable.

If you have more than one cat at home and one of them is always being aggressive or submissive to the aggressor, you need to do something about the relationship dynamics.

Most cats can live in harmony when they are socialized properly. Make sure that your cats are comfortable being around each other before leaving them alone.

Cats love their privacy when using the toilet. Give each one of your cats its own litter box. Having to share litter boxes can trigger aggression in some cats.