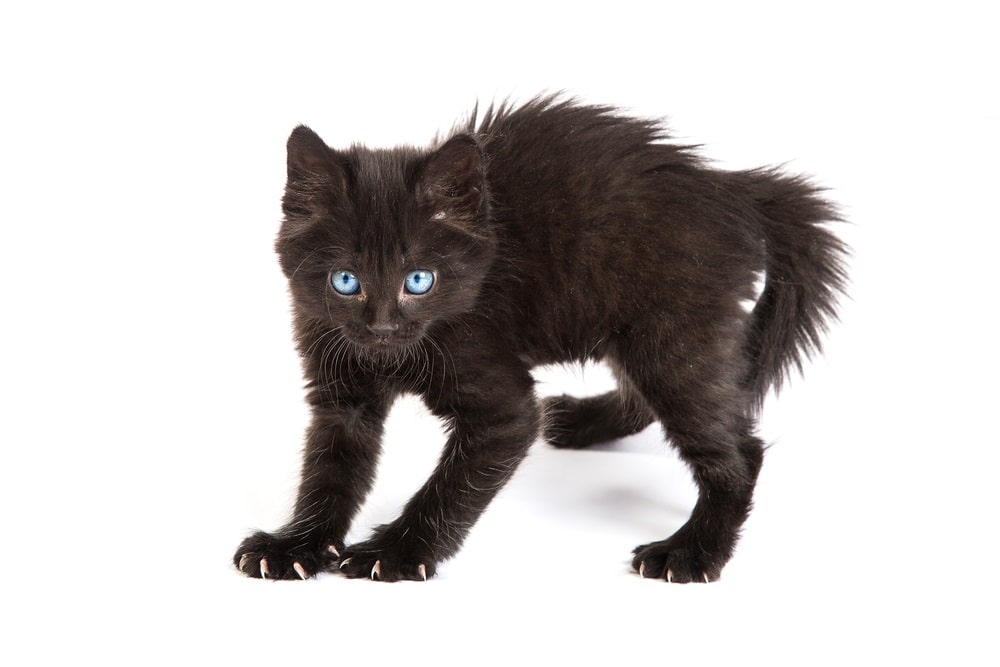 Many cat owners will agree that watching our cats makes for great entertainment. Watching a cat sleep can make you feel very zen. Watching a cat indulge in its crazy antics and weird cat behaviors rivals Netflix.

But why do cats run sideways at times?

Cats run sideways at times when they are feeling full of energy or playful. Running sideways can also be a show of aggression when the cat is feeling threatened or angry. It is a way of signaling to others that it won’t hesitate to use its sharp claws if necessary.

Although it might seem odd to see your cat run sideways like a crab, it is a ‘normal’ occurrence for many cats.

Let’s dive a little deeper into this weird cat movement.

Why Do Cats Puff Up And Run Sideways?

There are a number of reasons that can make your cat puff up and run sideways. But what causes the look of a puffed up cat? This is caused by a process called ‘Piloerection‘. Piloerection is an involuntary process of the cat’s nervous system which causes the muscles to contract.

When the muscles contract, it will cause the cat’s fur to rise and pull away from the body thus creating that puffy cat look.

In human terms, this is what happens when you get ‘goosebumps’ which happens when we feel a range of emotions. The same goes for our feline friend.

The walking or running sideways motion signals either a ‘come hither’ or ‘stay away’ gesture, depending on what is triggering your cat.

There are a couple of reasons why your cat is behaving like this.

Cats are rather playful in nature. They are curious and love to investigate their surroundings. This is even more noticeable in kittens that have endless levels of energy compared to adult cats.

In fact, a kitten on average has about 4x more energy than an adult cat.

When you see your cat running sideways and bouncing all around like a bunny, it is definitely in a playful mood. Be sure to match your cat’s energy levels for a good time.

Wouldn’t hurt for you to do the ‘crab dance’ together with your cat.

Your Cat Is Feeling Defensive

Cats are rather edgy and jumpy creatures. If you have a cat at home, you’ll notice how often they get shocked or surprised as compared to other pets.

It is also this highly-strung instinct that keeps them alive in the wild where they are always aware of the surroundings and ready to flee.

Cats run sideways when they are feeling defensive.

This can be a very sudden change in demeanor when something has spooked their radars and made them run sideways.

The cat will puff up their fur and do a sideways hop which also allows them to get away quickly if need be.

Watch this video of cats getting all defensive and spooked out by a cucumber and you will understand what I mean. 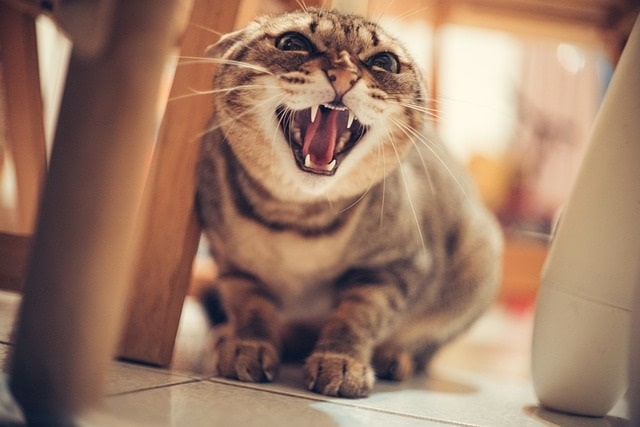 When your cat is caught in a situation where it feels threatened, it will also start to walk sideways. This will be accompanied by other body gestures like:

When you notice that your cat is turned sideways and showing signs of aggression, it might be best to leave your cat alone to calm down. Your cat might seem afraid of something that you can’t see but there’s usually a legit reason why.

It would be helpful to also know what’s triggering this hostile body language as it can result in unwanted conflicts and fights if you have more than one cat at home.

Cats feel threatened when there’s something in the room that they do not like. This can be another pet or even an inanimate object like balloons. Yes, cats are also known to be afraid of balloons.

It can also be caused by factors that you can’t see or hear like the scent of another animal or a wandering stray cat outside your home.

Your cat might see this as an invasion of its territory and start to react aggressively.

Your Cat Is Feeling Energetic

Most cats have a specific time of the day when they go all crazy and hopping mad. Cat owners usually term it as the ‘zoomies’.

You can see your cat zooming back and forth throughout the entire house as its life depends on it. The cat will walk sideways, run sideways, jump on top of furniture and counters and meow like its tail is on fire for a good hour before it settles down.

Sometimes it can even be longer depending on how young your cat is and how much energy it has to burn off.

Your Cat Wants Your Attention

If you have been out the whole and have not paid much attention to your cat, it might start to run or walk sideways when you are back.

Playful cats do this to try and get their owner’s attention for food, pets or some playtime.

Don’t forget that even though most cats don’t require as much attention as dogs, they also need a certain amount of quality time with you.

Otherwise, they might start to go bored and engage in destructive behaviors.

Why Do Cats Arch Their Backs And Run Sideways?

When a cat arches its back, it is to give the illusion that it is a lot larger than it really is. Together with the puffing and fluffing of its far, the cat will look like it has grown twice its size.

It does this to try and intimidate its opponent into backing down. You can also see this ‘puffing posture’ in reptiles and birds.

The notion of sideways running actually allows the cat to run away or attack a lot faster than if it was in a neutral position.

It is also a good posture to show off its sharp claws and trust me when I say this, a cat’s claws are as sharp as knives.

Male cats tend to get into fights more frequently than female cats. Especially during the mating season when they become more territorial.

If you have unneutered male cats at home, it would be best to get them neutered to prevent any unnecessary conflicts.

Why Do Kittens Run Sideways?

Kittens are little bundles of joy and watching them in action can make your heart melt. Kittens are more prone to running sideways than older cats.

Given their higher energy levels, they are always playing with their littermates or owners. It is pretty much an instinctive action by the cat and is perfectly normal in play or for self-defense.

Kittens often engage in sideways running when playing. They will walk or run sideways towards, you, another cat or even the mirror.

As weird as this behavior may seem, pet parents should not be overly concerned to see their cats walk or run sideways.

It is not always possible to understand or ascertain what is causing them to react this way. Some cats just do it as a very instinctive reaction.

Cats are naturally playful and lively characters which result in silly cat behavior. Walking sideways is always a good way for kittens or younger cats to develop the fine art of posturing and self-defense.