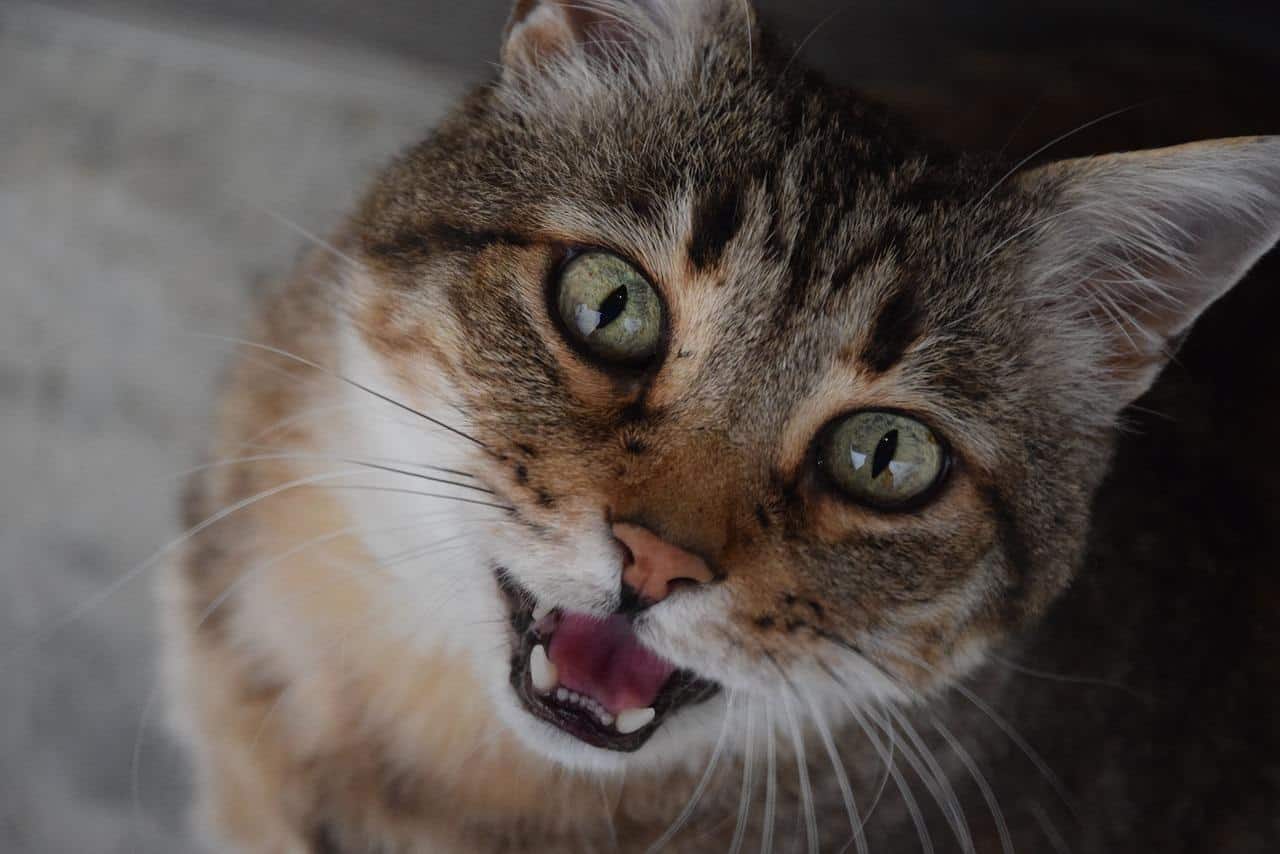 My cat sounds like a squeaky door hinge at times. He squeaks when I jump out from the corner to scare him. He squeaks at times when he wants affection and he makes a squeaky sound when picked up.

Makes me wonder if I have a hamster in cat’s clothing at times.

Have you heard your cat squeak when you pick it up? Why does your feline friend make such a sound?

Some cats squeak when picked up because you caught them by surprise. Not all cats like being carried and can make a squeaky sound out of protest. Kittens tend to squeak more than adult cats due to their undeveloped vocal cords.

To hear cats squeaking isn’t a very common form of vocalization. We will be sharing more about the frequent sounds that you can expect to hear from your cat.

Let us also understand what your cat is trying to convey when it makes a squeaking sound.

Why Do Some Cats Squeak When Picked Up?

If you have a rather strange cat like mine or one that is vocally expressive, don’t be surprised to hear your cat trying to voice its agreement or disagreement at times.

Here are some possible reasons that can make your cat squeak when carried.

1. Your Cat Likes Being Carried

If you have a cat that likes being carried and cradled like a baby, congratulations. You are in a club that many cat owners want in.

Not many cats enjoy being picked up and can leave their claw marks on you if you persist.

It took me more than a decade before my cat would allow me to carry him without putting up much of a struggle.

These days, he likes it when I carry him and we stand at the window to bird watch.

Some cats squeak when carried by their owners to voice their happiness and excitement. If you have been gone for most of the day, your cat has been waiting to be picked up and smothered with affection.

On the other end of the spectrum, you have cats that prefer to have all four paws on the ground at all times.

Some cats just don’t enjoy being picked up. It just doesn’t feel natural for them. Cats prefer to be in control and getting picked up can make them feel vulnerable.

Or maybe your cat is ok with being carried but today just isn’t that day.

Your cat is making a squeaking sound out of protest which is its way of saying “Stop trying to pick me up and put me down, you hairless oaf!”

3. Your Are Carrying Your Cat Incorrectly

Do you know that there is a right way and wrong way to pick up your cat?

Many cat owners tend to pick up their cats from under their armpits which isn’t comfortable for them. Your cat isn’t a human baby and shouldn’t be carried as one.

No wonder your cat is squeaking.

If you have touched the underbelly of your cat, you’ll notice just how soft and vulnerable that area is.

Don’t just yank your cat up without using the proper method.

Always support your cat’s body weight with both hands and hold them close to your body to make them feel secure. Do not carry them by the scruff of their necks. It is painful for most cats and makes them feel anxious.

If your furry friend has been squeaking when you pick it up, there’s a possibility that your cat is in pain or discomfort.

Was your cat injured recently?

The stomach area is very vulnerable to the cat as most of its vital organs are around that area. Many cat owners have been tricked into thinking that it is ok to stroke their cat’s exposed belly only to have the cat prove otherwise.

If your cat took a blow to that area or area the ribcage area, it will definitely hurt when you try to pick up your cat.

Your cat might be suffering from internal bruising or broken bones that you might not be aware of.

Your cat squeaking can also be caused by a gastrointestinal problem. Its stomach area might be bloated and tender.

If your cat has started squeaking out of the blue when picked up, it might be a good idea to take your cat to the vet for a thorough checkup.

Cats are good at hiding their illness so it is better to get any underlying medical condition treated as soon as possible.

5. Your Cat Is Fearful

There is a difference between a cat that doesn’t like being picked up versus one that is fearful. The former is born out of preference while the latter could be from a bad experience.

If your cat has gone through a traumatic experience while being carried, it could have left it with some emotional scars.

Just like someone who has developed the fear of flying after going through severe turbulence.

If you have a new cat that has recently been adopted, you won’t be able to know the past that it had especially if it was a rescue cat.

Your cat might be feeling so much fear and anxiety when being picked up that a squeak has replaced your cat’s meow.

You need to be more understanding of such cats. They need more time and effort to get past their fears. It is best to speak to your vet about your cat’s condition. They might be able to refer you to a pet behaviorist to try and resolve this problem.

6. Your Cat Is Still A Kitten 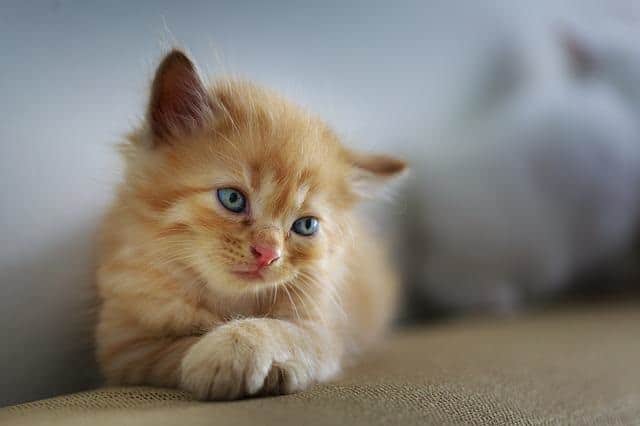 Kittens and young cats tend to squeak more than older cats. It takes time for a cat’s meow to mature.

The reason why a kitten’s voice sounds so squeaky is that it makes it easier for the mother cat to hear them when they are feeling hungry or in danger.

Some mother cats are known to sit on their little ones by accident. Hence a high-pitched squeaking noise would come in handy to alert the mother cat.

Cats aren’t as sociable as dogs. As much as I love cats, I don’t make it a point to go all lovey-dovey on any cat I see.

There is a proper way to introduce yourself to a cat before appreciating its chonkiness.

There has to be some form of understanding and mutual bond between you and the cat that you are trying to pick up.

Attempting to pick up a cat that hardly knows you or is showing signs of aggression is really a bad idea, even for the bravest of pet owners.

Even if the mild-mannered cat doesn’t draw blood when picked up by you, it might still squeak and struggle to break free.

Be careful when trying to pick up strays and especially feral cats. You have no idea how comfortable they are being handled by a human.

How To Train Your Cat To Be Ok Being Picked Up?

Sometimes, having your cat be ok with being picked up can come in handy. This is useful when you need to carry your cat and place it in a carrier to go to the pet sitter’s home or the vet.

Having a cat that doesn’t like being carried and can turn aggressive will make transporting the cat a lot harder.

It is a lot easier to work on a cat that is neutral or showing light resistance to being picked up. If the cat turns into the devil reincarnate, you might want to reconsider attempting this without professional advice.

What I did with my cat was to slowly get him used to my touching his underbelly. I would carry him a few inches off the ground for a few seconds and put him back down.

I did this a few times a day.

One thing which I thought helped a lot was to put my cat down before he started to struggle or squeak.

This told him that I’m willing to work within his comfort level and wasn’t going to rush things.

Over time, I started carrying him higher and longer to the point when he can last a few minutes of me cradling him like a baby.

Is It Normal For Cats To Squeak Instead Of Meow?

I’ve fostered many cats and kept a few, for a cat to squeak, that can be a rare moment. I think my cat does it because it’s a natural form of vocalization for him. More often than not, I will hear him meowing when he wants something.

If you have never heard your cat squeak until recently, it might be better to take it to the vet to make sure it isn’t due to a respiratory issue or injury.

Why Do Cats Makes A Noise When You Touch Them?

You might have a very vocal cat that likes to make a noise or sound when being touched. It doesn’t necessarily mean that your cat likes or dislikes the touch. You need to consider the rest of its body language to come to a conclusion.

Sounds That Cats Can Make

Most cats have an impressive vocal range and it can be interesting to hear the sounds that your cats can make.

Cats have learned that making certain sounds like meowing tends to get our attention a lot better. Have you ever tried meowing back at your cat?

Be glad if you have a cat that likes being carried all the time. Not all cats like it so don’t force your cat and make it feel uncomfortable.

All is not lost as you can slowly train your cat to tolerate being carried.

If you suspect that your cat’s squeaking is caused by a health issue, please get it to the vet ASAP. 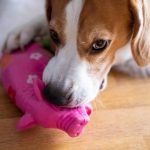 Why Are Squeaky Toys Bad For Dogs? (You Need To Know This) 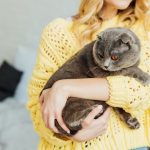 Why Does My Cat Meow When I Pick Her Up? 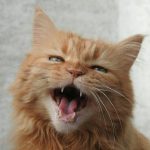 Meowing Back At Your Cat (Does It Work?) 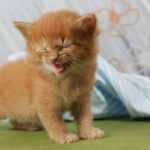 Cat Meowing Before Throwing Up (What’s Causing It?)