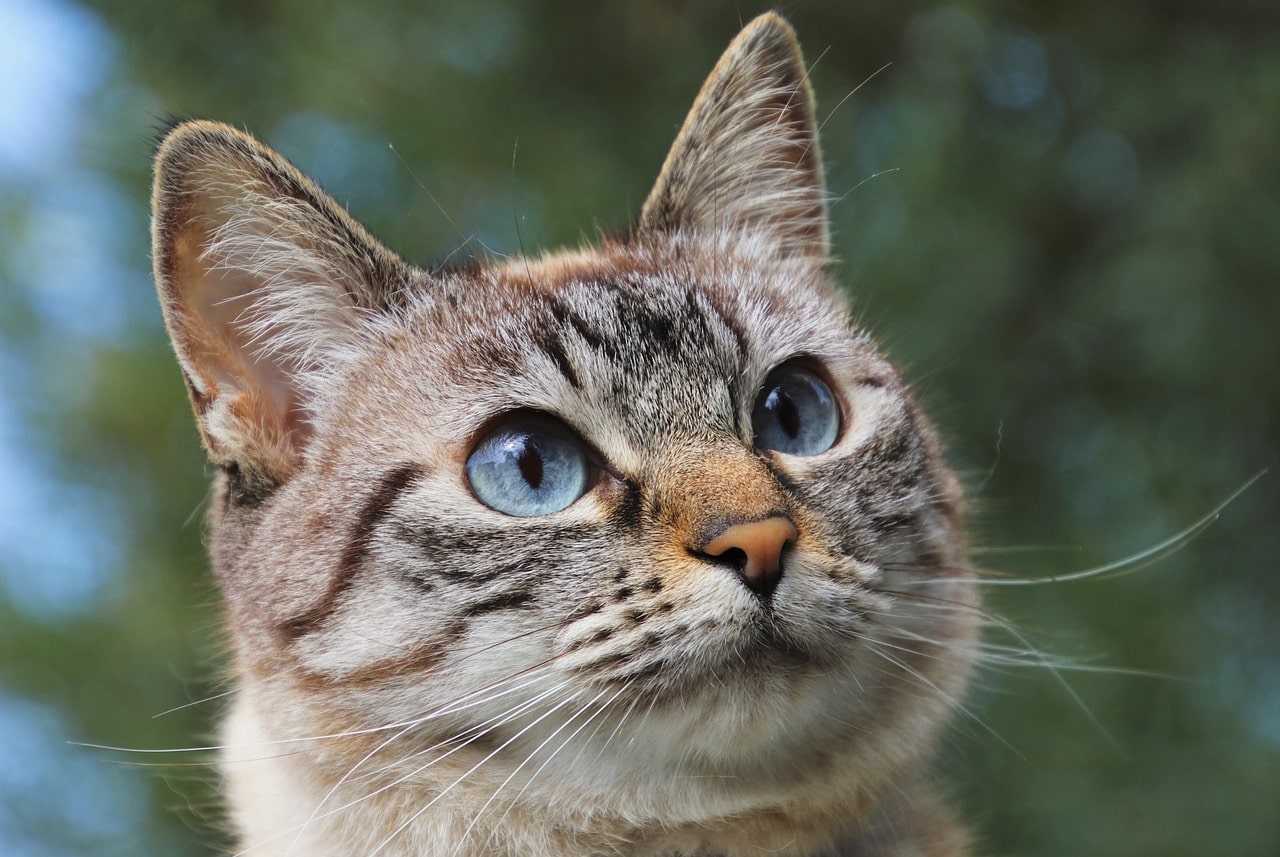 I have a thing for slowly running my fingertips along my cat’s whisker pads. It feels soft and he likes it when I stroke his whiskers too.

Have you ever wondered why are my cat’s whiskers so long?

Why does my cat need its whiskers for?

Do cat whiskers serve an important function other than making them look interesting and cool?

There is a lot more to your cat’s whiskers than most of us know.

Should I Cut My Cat’s Long Whiskers?

Most definitely not. In fact, don’t ever do anything to your cat’s whiskers besides showing it some tender loving care.

Cats largely depend on their whiskers to move about and hunt. Doing damage or altering your cat’s whiskers can cause your poor cat to become disorientated and scared.

If you want to experience how your cat feels if its whiskers are cut is to blindfold yourself for a few weeks and go about your daily life.

Not the best of circumstances.

Now that I’m done with this public service announcement, let’s move on to the next important point.

Cat whiskers, scientifically known as Vibrissaeare, are also called tactile hairs. In Latin ‘vibro’ means to vibrate which give rise to words like vibration and vibrato.

It also gives you a good clue as to how cats use their whiskers.

There are not connected to the fur coat like the rest of its fur but are deeply rooted in the cat’s central nervous system and muscular system.

Cat whiskers are not just found on the whisker pad situated alongside your cat’s nose but also above the eyes, under the chin and at their ankles.

There are many sensory nerves (up to 200 per whisker) located at the whisker follicle and there’s a sensory organ called the ‘proprioceptor‘ that is situated at the tip of the cat’s whisker.

Basically, your cat’s whiskers act like giant antennas for your cat, always transmitting important information about our feline friends surrounding back to the brain.

How awesome is that!

Our feline friends have their own in-built ‘radar system’ with the ability to sense vibrations which is something that your cat’s paws can also do very well.

How Many Whiskers Does A Cat Have?

On average, cats have about 12 whiskers per whisker pad and are distributed evenly and similarly on each pad to ensure accurate environmental readings.

Our feline friends also have 6-8 whiskers above their eyes and around their ankles.

What Are Cat’s Whiskers For?

Your cat’s whiskers have several important functions and any degradation of these functions can severely affect your cat’s quality of life. Just like how a cat’s eyelashes play an important part as well to maintain its vision.

One of the reasons for a cat’s whiskers growing long is for the whiskers to be about the width of the cat. This helps that cat to judge the size of an opening or tight spaces before it attempts to pass through it.

Therefore, if you have a large cat breed like the Maine Coons, you cant expect it to have longer whiskers.

The longest whisker ever recorded on a cat stands at 7.5 inches or 19cm. Not surprisingly, it belongs to a cat called Missi who is a Maine Coon.

Those are really long whiskers if you ask me.

Before entering a narrow space that might be too small for the cat, it will push its head into the opening first as a test.

If the whiskers are pressed against its face, this tells the cat that the opening is too small and there is a chance that it can get stuck. If the whiskers remain in their normal position, the cat will know there is adequate room and it’s ok to pass through.

Since the whiskers are about the same as the cat’s width, this gives the cat assurance that it won’t get stuck in a tight space. 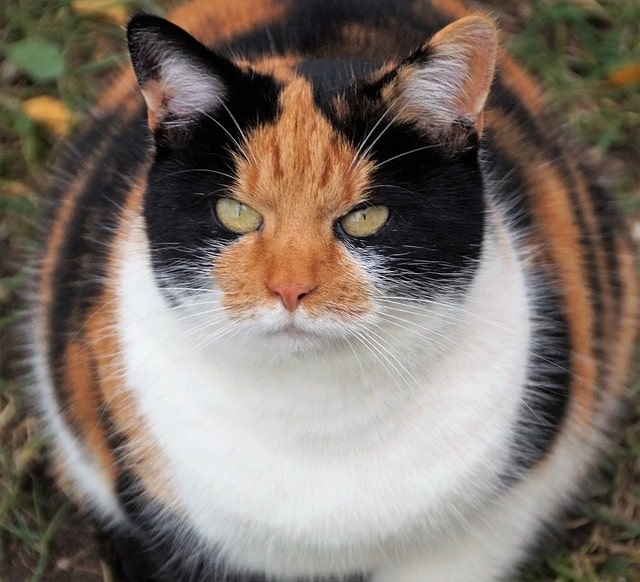 The above doesn’t really hold through for cats who are too fat. The whiskers will only grow to be as wide as their natural girth but not beyond that.

Therefore, if your cat has a couple of inches of padding to its side, the cat’s whiskers won’t give it an accurate reading.

There’s a good chance that your ‘chonky’ cat can get stuck in spaces big enough for its head but not for the rest of the body.

Getting Around In The Dark

Cats have great vision in the dark but poor eyesight up close.

They can see a lot better than many other animals in the dark due to how their eyes are made. Although they can’t see if it’s pitch black, cats only need 1/6 the amount of light we humans need to see clearly when it’s dark.

For humans, fumbling in the dark with our hands is usually a recipe for disaster. We can’t tell where we’re going and end up bumping into objects.

Cat whiskers are able to detect objects in the dark via minute changes in air currents. This tells them if there is an object that is close by or blocking its way.

The cat will swing its whiskers forward to also act as fingertips so that they don’t end up walking head-face into an object. Some cat breeds have very long whiskers and can definitely have a better feel of their surroundings at night.

As the cat’s whiskers are able to detect changes in the air current, this can signal to the cat if there is danger approaching.

Even though cats are hunters themselves, they aren’t apex predators and still need to hide and escape from bigger predators.

As mentioned, cats also have whiskers above their eyes and around their ankles. These strategic positioning of whiskers allows cats to be wary of any danger approaching from any direction and not just the front.

The cat will also be using its other sensitive senses like smell and hearing to access the threat.

An interesting fact is that a cat’s paw is very sensitive and can signal to the cat via vibrations in the ground if something is approaching or moving away.

Cats are expert hunters and rely tremendously on their whiskers when trying to catch their next meal in the wild, especially for feral and big cats.

Even though cats have good eyesight during the day and night, they are naturally long-sighted and can’t really see what is 30cm in front of them.

Therefore the cat’s whiskers help them go in for the kill when they have their prey up close. The cat will instinctively contract the muscles in their whisker pad to point the cat whiskers forward in 1/5 of a second.

This action allows them to accurately pinpoint the location of the prey and use their claws to catch it and bring it to their mouth.

You can tell how most cats are feeling by looking at their whiskers and by the reaction of the cat’s tail.

If your cat is feeling happy and relaxed, your cat’s whiskers will be in a relaxed position and pointing to the side. This should be the default position of the whiskers.

When the whiskers are swept back and pulled flushed to the side of your cat’s face, this usually means that your cat is feeling upset, stressed or fearful about something.

A curious cat will have its whiskers spread outward and forward to gather as much information as possible about the object it is investigating.

Yes they do and usually in proportion to the cat’s body size and cat’s age. Kittens will usually have shorter whiskers than adult cats since they are much smaller.

Your cat’s whiskers can also grow back in the event that it gets cut off or drops off.

Is It Normal For Cats To Shed Their Whiskers?

Yes, it is completely normal for cats to shed their whiskers as they grow older or if the whisker is damaged. But cat whiskers fall out at a much slower rate as compared to their fur.

This is because the cat has only a set number of whiskers and they can’t afford to lose or shed too many at a time.

Why Are My Cat’s Whiskers Curly?

You will notice that your cat’s whiskers aren’t totally straight. In fact, in some cats, it can be rather curly.

There are a few reasons that can make a cat’s whiskers look like they had hair rollers on.

Cat Is Getting Older

A Cat’s whiskers tend to curl as the cat gets older. Our skin tends to sag and gets droopy as we age. We will also see the same aging signs in our cat.

It is also common to see cats with black whiskers as they older due to the presence of melanin.

Don’t try to straighten or cut off the curly part of the whisker as it can stress out your cat.

Rubbing Their Faces Against Hard Objects 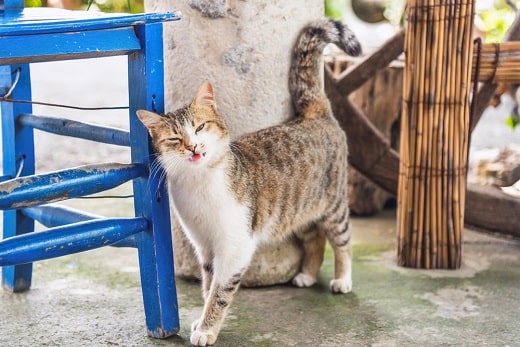 Cats love to rub their faces onto objects to leave their unique scent on them. This allows the cat to mark its territory which calms them down.

They will rub their faces on hard objects like the wall, furniture and even your legs. This constant rubbing action can cause their whiskers to get curly over time.

Nothing to worry about as the curly whiskers work just as well as straight ones.

When a new whisker is growing, it will usually be curly. It will naturally start to straighten out as it reaches its full-grown length.

Be Aware Of Whisker Fatigue

When this happens, the cat can begin to appear and feel very agitated or stressed out.

Although we don’t have whiskers it would be similar to someone touching or pulling our eyelashes or nose hair every few seconds.

I would be pretty pissed as well.

A common occurrence of whisker fatigue in cats can be caused by the wrong water and food bowl. If the bowls that you use for your cat are too narrow and deep, it will cause the whiskers to always brush the sides while your cat is eating or drinking.

Your cat will be showing the below symptoms if it is suffering from whisker fatigue:

If your cat just stares at its water bowl without drinking, it could be due to whisker fatigue. The most simple way to combat this is to get wider and shallow bowls for your cat. This will allow for more space for your cat’s whiskers to be in a neutral position while eating or drinking.

Broken whiskers are rather common for young cats as they tend to shed their whiskers more often than older cats.

This can also happen to cats when they engage in rough play. You don’t have to be worried as the whiskers will grow back nicely.

However, if you notice that your cat’s whiskers are constantly broken, it needs to see a vet to make sure that there are no underlying health issues.

Now that we have a deeper understanding of our cat’s whiskers and how they work, we can fully appreciate the amazing importance that something as simple as whiskers can have in the quality of our cat’s lives.

Remember to not pull or cut your cat’s whiskers as it can cause much distress to it.