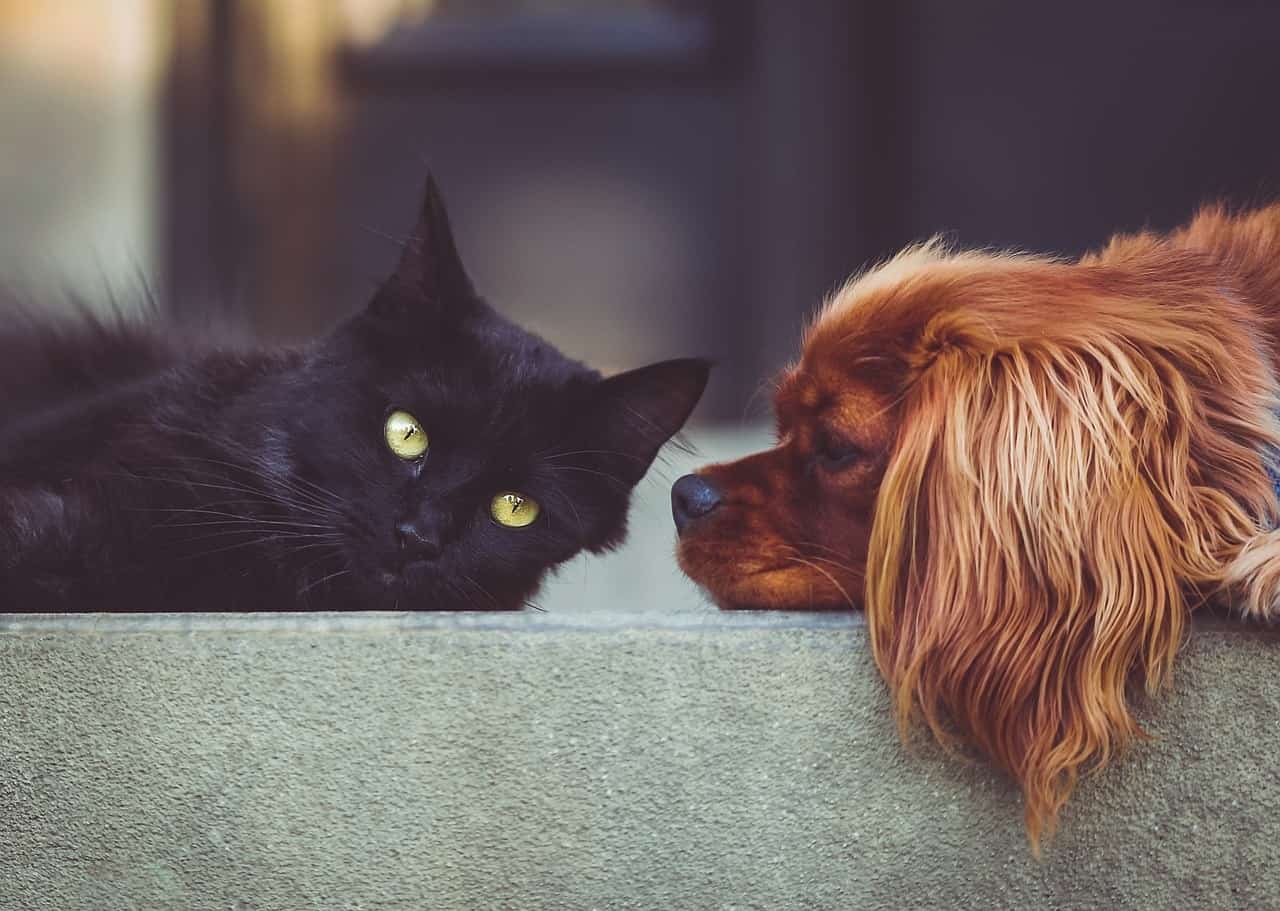 If there is one thing that I often hear from other cat owners is “My cat hates me”. Our cats have perfectly trained us to be feline pleasers. I’m sure my cat hates me too for not allowing him to drink the creamer out of my coffee and when I chase him out of my laundry back.

But the only one time when I really thought that my cat hated me was when I brought my dog back from the shelter. Chaos reigned for the next couple of months. If you are a cat owner who really wants a dog as well, the question “Will my cat hate me if I get a dog” will be stuck in your head for a while.

The good news is that your cat won’t really hate you if do decide to get a dog. But you can expect your cat to not be too happy with the decision. You will need to know how to properly introduce your pets to prevent any future conflicts.

Let us take a look at why your feline companion is acting up with the new puppy or dog and what you can do to bring peace back at home.

Why Is My Cat Acting So Distant With My New Dog Around? 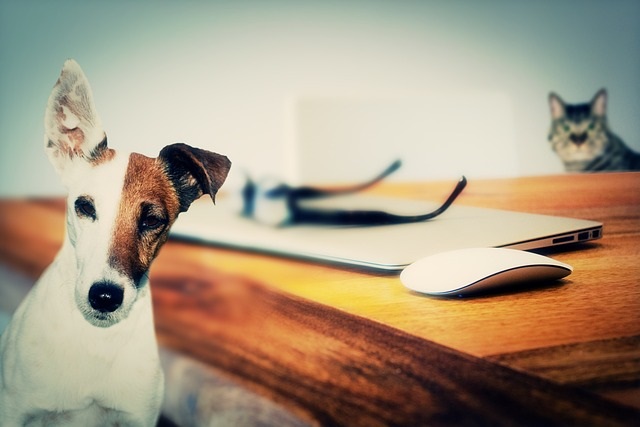 For the longest time, cats and dogs are portrayed as mortal enemies with the dog usually seen as the bad guy. The same goes for cats and mice in the cartoon Tom and Jerry.

Dogs and cats don’t behave in this manner because they hate each other but mostly due to their biological nature.

As a cat owner for many years, the number one reason that most cats do seem so unwelcoming to a new pet is largely due to their territorial nature.

In the wild, big cats like tigers and lions will roam far and wide to look for food or a mate. As they roam, they will mark their territory with their own scent. This is their way of letting other trespassers know that this area has been spoken for and to enter at their own risk.

You can even see this behavior in our domestic cats when they go around the house rubbing their faces and bodies against you and objects. It is your cat’s way of marking what belongs to it.

Unlike dogs who are pack animals, cats are considered to be solitary animals who live most of their lives alone. And when you are alone, you have to be territorial to safeguard your own resources and life.

With the arrival of a new dog at home, your cat feels like its territory has been encroached on by someone new and won’t be too happy about it.

Cats are creatures of habit and they do best with a routine that they have established as the boss of your house.

My cat always wants to have his meals at the same time, sleep at the same places and does his routine home inspection at 5.36pm every day.

It might seem a bit much and boring for us humans but it helps our cats feel safe and secure. But to our cats, a change in their routine can throw them off guard and have an impact on their mental and physical health.

With a new dog at home, things can get pretty chaotic fast which will make your cat feel that its usual routine has been thrown out the window.

You might start moving things around the house like your cat’s litter box or bed just to accommodate the dog.

Cats Need Time To Warm Up

We know by now that our cats are loners, unlike dogs who crave as much company as possible. Imagine putting a hardcore introvert in a room full of extroverts. The introvert will start to have a nervous breakdown in no time.

The same thing can happen to your cat if you have an overly excited and friendly dog who is just eager to be friends with your cat.

Such high energy is off-putting for a cat who might see the dog as trying to be aggressive. When meeting a cat for the first time, it is best to be relaxed and nonchalant about it and let the cat come to you.

How Do I Introduce My New Dog To My Cat? 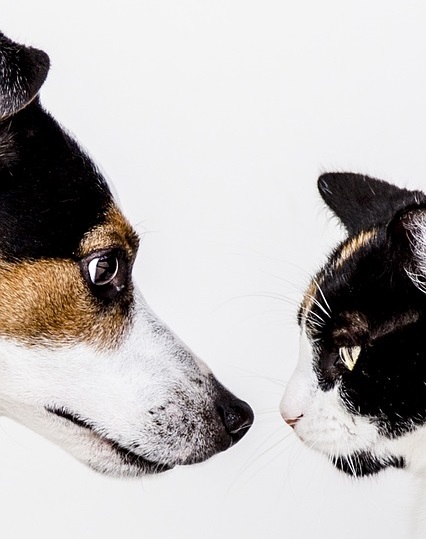 Most pet owners tend to get impatient and rush this process and wonder why their pets hate each other. If you want your cat and dog to get along eventually, you need to take it slow and move at your cat’s pace.

If you have an aquarium at home, the best way to introduce a new fish is to keep it in its original bag and place it in the fish tank. After a few minutes, you add some aquarium water into the bag for the fish to get used to the temperature.

This process is repeated a few more times before the new fish is finally released into the aquarium.

The same analogy applies to your cat and dog. They need to be at the same ‘temperature’ before allowing them to mingle.

Here’s what I did when I first brought my dog home.

Your dog and cat needs to be separated during the initial phase. Don’t confine your cat and let your dog roam freely. It needs to be the other way around. Letting your cat feel couped up will only make it feel more stressed.

Animals get to know each other through smell. So take a cloth and rub it all over the cat and pass it to your dog. Do the same to your dog and let your cat get comfortable with the dog’s smell.

Meet At The Door

The next step is to let your dog and cat meet via opposite sides of a door. Let them smell and hear each other as part of the familiarization process.

Feeding them a meal or a few treats together on opposite sides of the door is also a good way to break the ice. Food serves as a socialization medium for humans and it can work the same way for our pets.

Let both your cat and dog feel that it is safe and ok to be eating next to each other.

After a few more days of using the door, you can put both pets in the same room but under strict supervision. Make sure to leash your dog in case it gets too excited or aggressive.

Do the face to face meeting in the living room where there’s ample space for your cat to hide and escape when it starts to feel uncomfortable.

Never leave your pets alone unless you are ABSOLUTELY sure that they are fine with each other.

How Long Does It Take For A Cat To Get Used To A Dog? 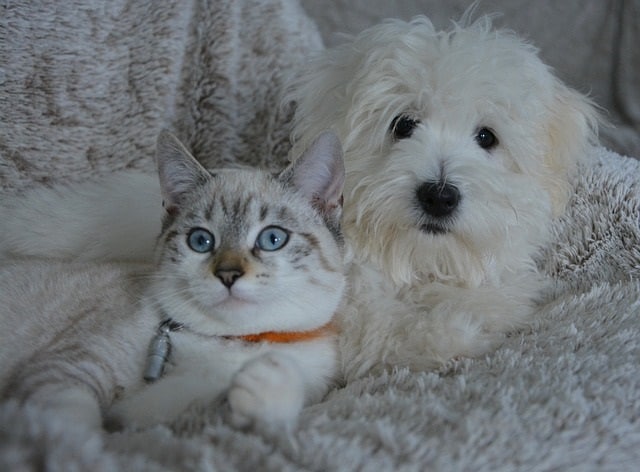 The direct answer would be as long as it takes. Each cat and dog has its own personality and their own likes and dislikes.

There isn’t a way to tell how long it will take before your pets can get along. in my case, it took close to a month of careful monitoring and socialization. These days it is pretty rare to see them taking a nap together or my cat trying to lick my dog to death.

In some cases that I’ve heard, it took just 1-2 weeks.

Dr Gary Landsberg who is considered one of the top animal behaviorists in the world, says that pet owners should learn to appreciate the differences between these two species rather than just hope they got along better.

Will My Cat Be Jealous If I Get A Dog?

If it has only been you and your cat as a family unit, the presence of the dog can make your cat feel insecure.

This can make the cat react aggressively towards the dog or even you. Make sure to continue giving your cat lots of love and attention even with the new dog around.

The jury might still be out on this one but some animal behaviorists claim that cats are capable of holding grudges.

In some ways, I can attest to that.

There are times when my cat isn’t very clean after using his litter box. He knows that means a cleaning session with a damp towel.

Suffice to say, he doesn’t like it and will cry as if I am torturing him. Once I’m done, he will hide in the corner and wait for me to walk by before sprinting out and giving me a nick on my ankle or hitting me with his furry little paws.

Cats can form a negative association in their memory which causes them to react in the following ways: 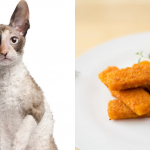 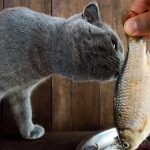 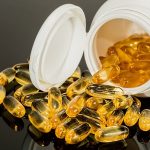 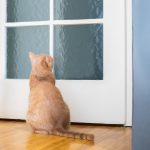 My Cat Won’t Stop Meowing At The Door (What Can I Do?)