In my neighborhood, there is a cat called May. Or that’s what I call her because I first noticed her in the month of May. I would call May the cat more of a feral cat than a stray. She is rather cautious of humans but is happy to eat the food that we leave her.

Not too long ago, a fellow neighbor told me that he saw May with a bunch of kittens. We went to where she was nesting and saw her and six healthy young kittens. A few weeks later, another neighbor spotted May and her litter on the move to another part of the area.

May was busy moving her kittens around on a regular basis. But how often do feral cats move their kittens?

A feral cat mother will move her kittens as many times as necessary. Her priority is the safety of her litter and she will always be on the lookout for a new nesting area that is away from danger like wild animals and humans. A feral mother cat will also try to move her kittens to a place that is closer to a food and water source.

In this article, we will be taking a look a closer look at the life of a feral mother cat and if there’s anything that you can do to help her and her kittens.

The Life Of A Feral Mother Cat

Every time I spot a feral cat, my heart sinks a little because for many feral cats, there might not be a tomorrow. From predators, sickness, diseases and accidents, the odds of a feral cat surviving till its golden years are rather slim.

Female feral cats are sexually mature at the tender age of four months old. It is possible for a female stray cat to have up to 200 kittens in her lifetime.

Once the feral mom cat has given birth, the natural weaning period will be between four to six weeks. But the mother cat will look after her kittens for close to 15 weeks before the little ones will leave the nest and live their own lives in the wild.

How Often Do Feral Cats Move Their Kittens?

There aren’t any scientific studies done on the movement of feral mom cats and their litters. But based on my experience and conversations with many feral cat feeders, it is a lot more often than we think.

The number one priority of a mother cat is the safety of her kittens. She will do what she can to ensure their survival when they are in her care.

Before a feral cat gives birth, she will be on the lookout for a suitable birthing area. She will choose a spot that is quiet, dry and hidden from sight. This gives her the best chance of going through labor without any interruptions.

If a pregnant feral cat is really desperate for someone to help her, she might even show up at your doorstep and not leave you alone.

Most feral cats won’t usually move their kittens during the first week as they are still neonatal kittens who are very weak and vulnerable. But if the need arises, she won’t hesitate to shift her babies to a safer place.

Here are some reasons that will make a feral cat move her kittens:

When a feral cat moves her kitten, it might seem like a safe environment at that time but it is common to find the whole gang under the car or inside the engine hood. Many cats have been injured or killed when the driver starts up the car without realizing that its occupied.

Moving kittens doesn’t just apply to stray cats but also to our house cats. My sister took in a pregnant stray a couple of months ago and it started to move her kittens around the mouse just to find the best resting spot.

There was a rather sad story that one of my neighbors told me about recently. She found a black feral cat that has just given birth in her shed. She counted 5 kittens that the mother was nursing and she tried to look after them without spooking the mom.

A couple of days later when she went to check on the family, she noticed that the mother cat was gone and what remained was the corpse of two dead kittens.

It seemed that the mother cat took off with her three remaining kittens and left the two who she thought didn’t stand a chance at surviving.

Or it could be that she was afraid that the decomposing bodies of the two dead kittens would attract predators which was why she moved the rest of the litter to another nesting spot.

As brutal and cold-hearted as it might be, female feral cats abandon kittens that they think have a low chance of surviving. She will carry these kittens away from the nest or abandon them.

These orphaned kittens will then have to fend for themselves but many do not make it due to the lack of care.

Will A Feral Cat Abandon Her Kittens If You Touch Them?

There’s a belief that mother cats will abandon her kittens if you touch them while she is still nursing them. You can chalk that up as a myth because I have held many young and nursing kittens without the mother abandoning them.

Wild rabbits and doe deers tend to do this but not when it comes to cats.

However, this doesn’t mean that you should just start touching and picking up any feral kitten that you see.

If the mother cat thinks that you are a threat to her kittens, she will not hesitate to turn aggressive and attack you. As cute as feral kittens are, they are still not properly socialized with humans and can give you a nasty bite or scratch.

The only times you should handle these kittens are if it seems that they are sick or in danger. Don’t just remove feral kittens from the area without giving it a few hours to see if the mother cat returns.

The mother cat might be out looking for a new spot and will be back to carry these seemingly abandoned kittens.

Do Feral Cats Remember Their Kittens?

When the kittens are born, the feral mother cat will start to lick her kittens very often. This helps to keep them well groomed by it also transfers the mother’s scent onto her litter.

In return, the kittens will knead the mother to pass their scent onto her and engage in social grooming with each other.

By doing so, the mother and her kittens will recognize each other by smell which will last till the kittens leave the nest.

What You Can Do To Help A Feral Cat And Her Kittens?

When trying to help a feral mom and her kittens, there are a couple of things that you need to be aware of.

These aren’t your usual house cats. Feral cats aren’t used to being in contact with humans and can turn aggressive.

Don’t remove kittens that are less than 12 weeks old from the mother. Kittens need to be with their mom for food and to learn how to behave properly.

You can provide food and water for the mother cat and her kittens once they can eat solid food. But it would be better to just leave the food there and leave. Most feral cats I’ve met won’t come near the food or water until I’ve left the area.

The best thing that you can do to help these cats is to get them neutered or spayed as soon as possible. Kittens can be sterilized about 4-5 months of age before they reach sexual maturity.

There is a program called Trap Neuter and Release which promotes the sterilization of stray and feral cats to help control their population. Many vets involved in this program will do the procedure for just a small fee.

Once the cats are sterilized, they will then be returned back to their community.

Some vets that I’ve spoken to are often faced with the moral dilemma of having to spay a feral pregnant cat. Spaying a cat that is pregnant can affect the unborn kittens. Some might see it as cruel while others see it as a way of preventing more homeless cats that end up getting euthanized at shelters. 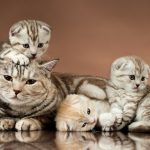 Why Does My Cat Keep Bringing Me Her Kittens? 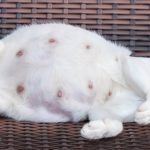 When Can You Feel Kittens Move In A Pregnant Cat? 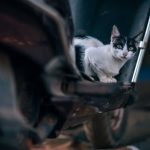 A Stray Cat Won’t Leave Me Alone? (What Should I Do?) 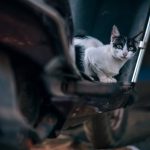 What Does It Mean When A Random Cat Comes To Your House?