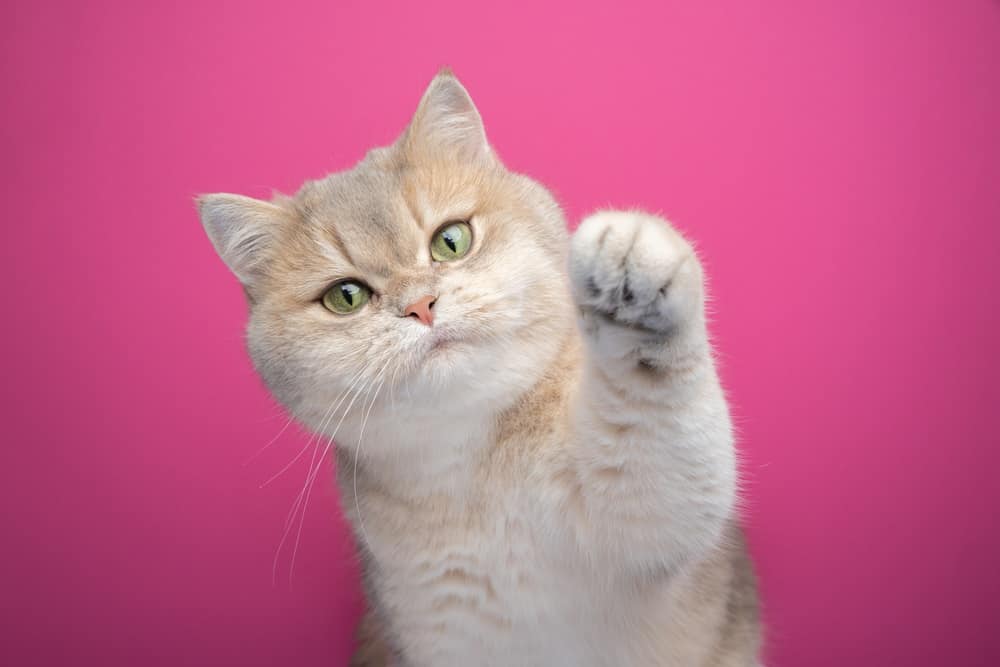 Because cats hate you! Just kidding.

I’ve been paw slapped or ‘kitty-punched’ by my cat too many times till I’ve lost count. What I’ve learned over the years is to not underestimate the power of a cat swat. When caught off guard, it can stun you for a second.

Cat paws aren’t just made for walking but for slapping too. But why would our dear darling cats slap us?

When a cat slaps you in the face or hands it could mean that the cat is feeling playful or in the mood for some food. Cats slap out of anger and aggression too which is why you need to learn to read your cat’s body language to prevent getting injured.

There are many nuances when it comes to the ‘cat slap’ which we will be covering in this article. It helps cat owners to know how to differentiate when the cat is being playful or trying to leave claw marks on you.

My thoughts exactly when I first experienced the power of my cat’s paws on my nose. It happened a few weeks after I adopted him. He was in a loaf position on my work desk and I was attempting a ‘nose kiss’ on him.

But I lived another day to tell the tale.

Cats not only slap their owners but other cats and objects as well. So it isn’t just about you.

Why Does My Cat Hit Me With His Paw When I Pet Him? 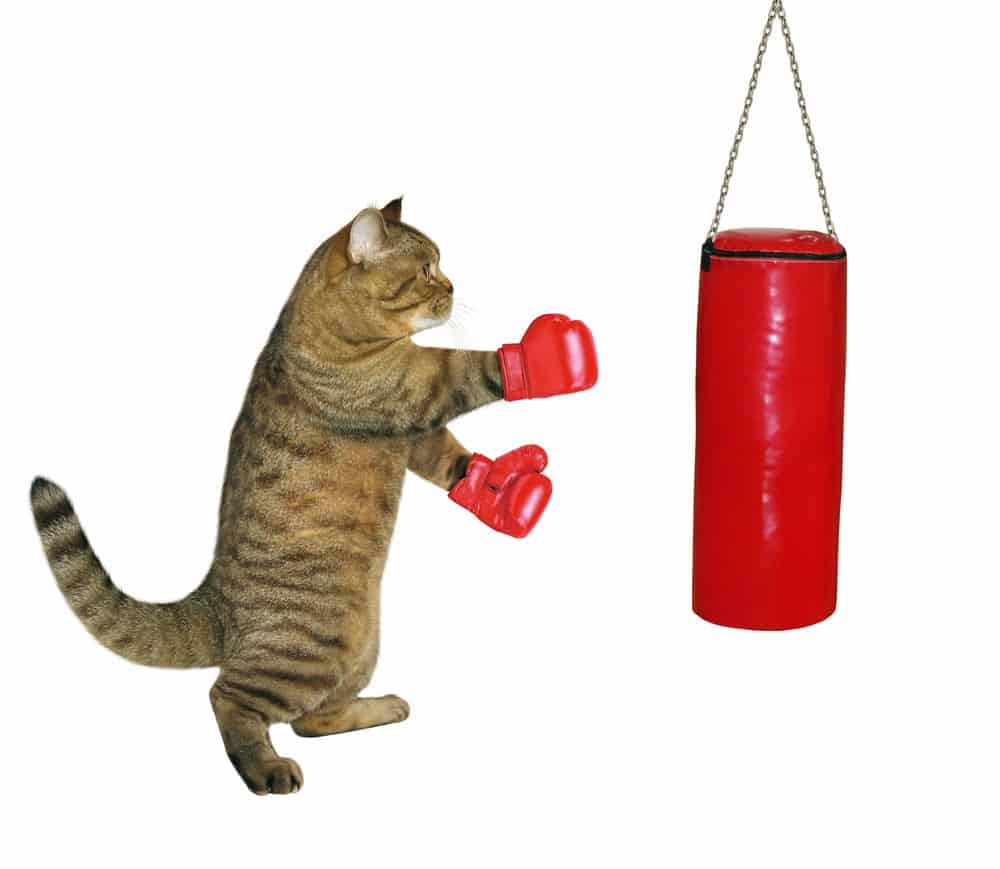 Petting, cuddling and kissing my cat is something that I have to do at least a thousand times a day. He has this strong magnetic charm that just draws me in and I can’t resist.

The thing is, our cats aren’t always in the mood for loving.

The body of a cat is built a lot differently from ours. Cats are designed to be walking radars in the wild. This helps them detect prey when hunting and to flee as early as possible when danger is near.

There are many receptors on the cat’s skin that are very sensitive to temperature changes, air movements and of course, touch.

Have you ever tried touching your cat when it isn’t looking?

My cat launches five feet in the air when I do that.

That’s how sensitive and responsive they can be to being touched without warning.

During a petting session, your cat will enjoy it for the first few minutes. But cats tend to feel uncomfortable after some time due to overstimulation and sensory overload.

When this happens, your touch can actually start to feel painful to your cat. The reflex action for most cats will be hit with their paws as a warning gesture to ‘cease and desist’.

Continued stroking will result in your cat using its sharp claws and teeth. You might experience the same fate when you try to rub your cat’s belly. It is such a sensitive area for many cats which can make them feel uncomfortable.

If your cat is hissing, fluffing up its tail and thumping the ground with it, looking seemingly agitated, it’s best to stop.

Why Do Cats Hit You When You Walk By?

I had this problem with my cat for the longest time. He would camp near the edge of a table or chair and reach out to hit anyone that is within range of his paws.

It wasn’t a hard hit but it can catch you off guard when your cat slaps you out of the blue.

Another variation of this is my cat hiding around the corner or under the sofa and hitting me with his paws when I walk by.

There were a couple of times when this action almost gave me a heart attack.

My cat did this to me in the middle of the night while I was walking to the kitchen from my room.

It was dark and all of a sudden, “Wham!”

If that doesn’t scare the living daylights out of you or make you pee a little bit in your pants, you aren’t human.

If your cat has a habit of hitting you when you walk by, it could be due to their predatory instincts or your cat being in a playful mood.

Cats are great hunters and have a high success rate when hunting. Many cats in the wild kill their prey just for the fun of hunting without eating them.

Your cat is using you for target practice and is honing its hunting skills.

I knew I had to stop this aggressive behavior because it can cause an accident and he was starting to use his claws on me.

I had to be mindful whenever I stepped out of my room at night. Carrying a spray water bottle almost help deter my cat from hitting me.

When my cat reaches out to hit me, I will let out a loud “OOWWW” sound and spray him a few times with water.

It did take a while for him to correct this behavior but he eventually did.

Why Does My Cat Hit Me In The Face When I’m Sleeping? 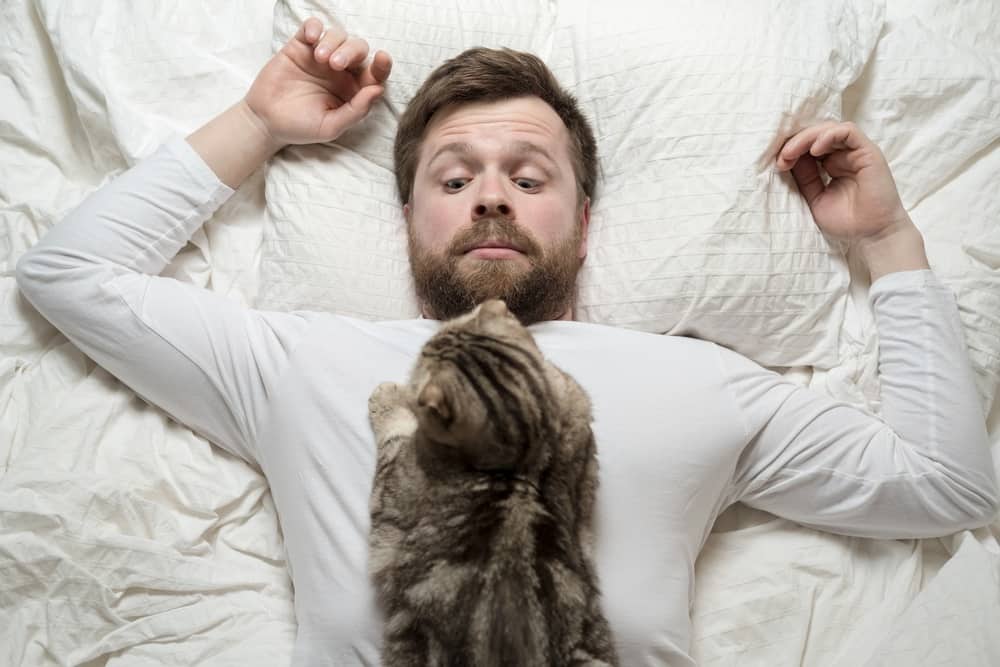 When it comes to cats, the word ‘later’ doesn’t quite exist in their dictionary. When a cat wants something, they want it NOW.

Experience has told me that you can try to delay the inevitable but resistance is futile.

Having a cat hitting you in the face while you are sleeping has to be one of the most jarring sensations in the world.

Even more so if your cat hits you while you are having a lucid dream.

Your Cat Is Hungry

Cats do this when you have overslept and are late for your cat’s feeding schedule. You don’t need an alarm clock to remind you, just your cat.

When it comes to schedules, cats have an amazing internal clock.

My cat wakes me up every morning at 7a.m for his morning meal. Failure to comply will result in incessant meowing and a furry paw to my face.

Another reason for cats slapping their sleeping owners is to demand their attention.

Cats do not have the same sleep cycle as humans. They are crepuscular which means that their body clock keeps them active during our sleeping hours.

All our feline pals have to do is hit you in the face to get your attention. I consider myself to be quite a heavy sleeper but I’m no match against my cat’s paws.

Why Do Cats Hit You For No Reason?

My cat’s strange actions have left me scratching my head at times. He can be sleeping behind my laptop while I work and out of nowhere, he will hit my hand with his paws.

“I’m sorry your Majesty. Was I typing too loudly?”

There are times when I will be in my living room and watching TV. He will walk onto the couch that I’m sitting on, smack me on the head and walk away.

“I’m sorry your Highness. Was I breathing too loudly?

Cats can be real asses at times.

Your Cat Wants To Be Left Alone

Have you had days when you just didn’t feel like talking to anybody or being sociable?

Our cats have their off days too.

I’m guessing this has something to do with the nature of cats. They are solitary creatures and tend to be alone in the wild.

Cats do not really require that much companionship as compared to dogs who are pack animals.

Cats do treasure their alone time and have days when they just want to be left alone.

On days when my cat attempts to hit me whenever I try to get close, I will leave him alone and give him space.

Your cat will appreciate that and will come to you for affection when it’s feeling ready.

Why Do Cats Slap Other Cats?

The good news is that our cats don’t just enjoy slapping us. They do it to other cats and other animals too.

One thing I’ve notched is that cats don’t tend to slap cats to animals that they are unfamiliar with. This can lead to fights and two fighting cats don’t slap. They will claw and bite each other.

Cats tend to slap cats and other pets that they are already familiar with.

Having a few pets under the same roof can result in sibling rivalry between them at times. They can squabble over food, toys, litter boxes, being a bully or just out of irritation.

I wouldn’t be too concerned about your two cats slapping or hitting each other. I call it kitty banter and it’s harmless.

You should put a stop to such behavior if it tends to escalate into real fights or if one of your pets is being bullied.

It could be due to resource guarding that is causing this and can be solved by making sure each pet has its own essentials and space at home.

Why Do Cats Slap Things?

Your cat is a curious pet and likes to examine and investigate things that are new in the house. One action that your cat does while investigating an object is to slowly reach out and slap it.

What your cat is testing for is reactivity.

It wants to see if the object is alive or will it strike back and attack your cat. Smacking an object allows your cat to get a feel of what it is dealing with.

Why Do Cats Hit You With Their Tails?

You can gather a wealth of information by looking at your cat’s tail. If your cat is using its tail to hit you, it is trying to tell you something.

There are a couple of things that you should take note of.

If your cat’s tail moving in a relaxed and slow manner?

If it is, that usually means that your cat is feeling comfortable and is fine with you being around it.

But if your cat’s tail is all fluffed up and the tail is making more of a thumping action against you or the floor, its better than you high tail out of there or stop whatever you are doing to your cat, like brushing or grooming its nails.

Such an action means that your cat is feeling irritable and could lash out at you.

Yes, I know that we as cat owners tend to be very sensitive human beings and we see our cat’s physical outburst as a great sign of disrespect and hate.

Cats swat not because they bear a grudge or want us out of their lives. They are just being their usual unpredictable and hormonal selves.

You can always irritate your act while it’s sleeping to show who’s the boss after taking one in the face.