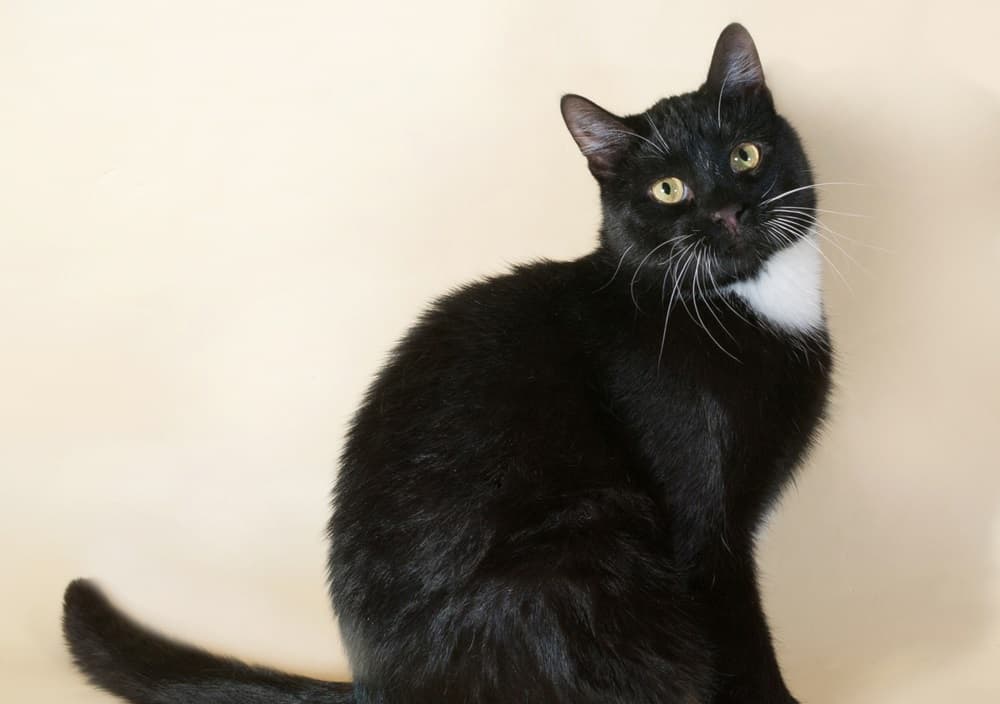 I love black cats. They look so full of elegance and their onyx-coloured fur has a shimmering glow to it. Their emerald green or bright yellow eyes just lights up their faces too.

Not all black cats are fully black though. You can sometimes find a black cat with white fur on its chest. This makes the cat look even more adorable as the cat looks like it is wearing a bow tie or a suit.

Why do some pure black cats have a white spot on them?

Some black cats have white spots or markings on them due to a pigmentation mutation called Piebaldism. This results in white fur popping up against the cat’s natural coat color. This discoloration doesn’t affect the cat’s health hence there isn’t any need for cat owners to worry.

Let us take a closer look at this interesting phenomenon that can happen to so many black cats.

Why Do Black Cats Have White Hair?

Piebaldism in black cats can be seen when with the appearance of white hairs on their bodies. Piebald cats can come in a wide range of white spottings.

Some cats have just a little different colored spot on their chest while others can have big white patches distributed all over the body, like my cat.

As close as it sounds, Piebaldism has nothing to do with pies. The word originates from the bird ‘magpie’ whose plumage has both black and white feathers. Bald refers to the absence of color rather than hair.

Dr. Christian Yates from the University of Bath states that piebald patterns happen way before the cat is even born. It occurs during the development stage of the embryo. The cells that produce the pigment of the fur don’t spread properly through the embryo.

Thus in areas without pigmentation, the cat’s fur will be white.

Piebaldism is a genetic mutation that is inherited from the cat’s parents. However, the pattern that occurs on the cat isn’t.

There isn’t any concrete evidence to determine the degree of piebaldism in a cat. Some researchers believe that it can be due to factors like temperature while the embryo develops.

Piebaldism not only happens to cats but to other animals like horses and dogs as well.

Origins Of The Black Cat 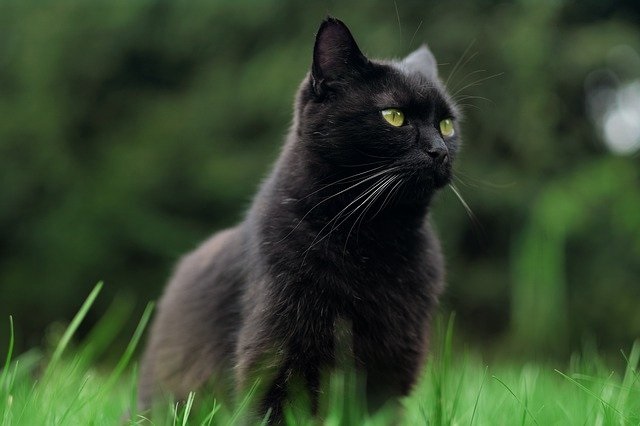 A cat that is black can be from a specific breed or a mixed breed. Not all black cats are completely black in you were to look carefully.

So many black cats actually have a grayish or reddish brown tint to their fur. Some even have markings on their coats that are barely visible due to the darkness of the fur.

The only cat breed that is considered to be a true black cat is the Bombay cat. The Bombay breed is exclusively black. This means that the cat’s whiskers will also be black in color.

This can seem rather strange as most black cats have whiskers that are white by default.

Are All Black Cats Bombay Cats? 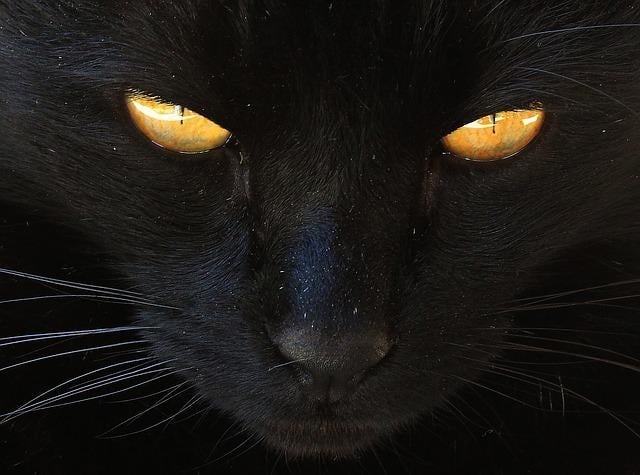 Not all black cats need to be of the Bombay breed. The Bombay is just more special as it is the purest of all black cat breeds and only comes in one color. This is what makes the Bombay cat so rare.

There are other cat breeds that are also able to produce cats that are solid black in color.

These cat breeds are:

If you are looking for a cat that comes in an all-black coat, you are definitely spoilt for choice.

Bombay cats are definitely a rare breed and I would also dare say not very popular due to the lack of color variations of the breed. A cat owner would need to like a black cat in order to adopt or purchase this cat from a breeder. 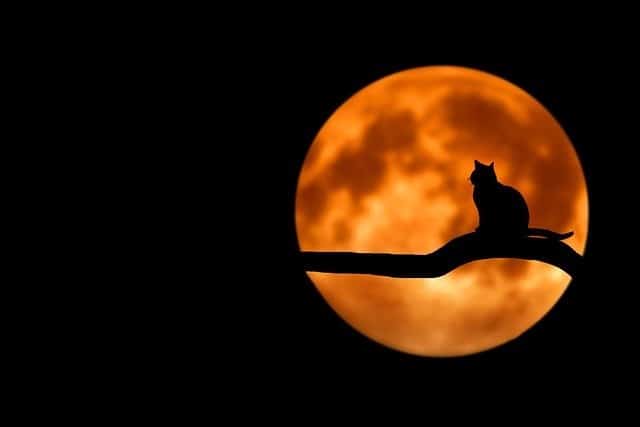 Black cats have gotten a bad rep for the longest time. They are associated with Halloween and witchcraft during the middle ages.

In western cultures, a black cat is often regarded as a bad omen and a symbol of bad luck. Many believed that a curse will befall you if you see or cross paths with a black cat.

Some folklore even label black cats as shapeshifters or messengers for evil spirits. It is sad to know that many black cats were hunted and killed due to such beliefs.

Not everyone regards blackcap as doom bringers.

Sailors prefer to have black cats on board as they saw a black cat as a sign of good luck. In ancient Egypt, all cats were regarded as good luck and many households kept cats as pets.

These cats were even mourned for and mummified when they died.

What Are Black Cats With White Spots Called? 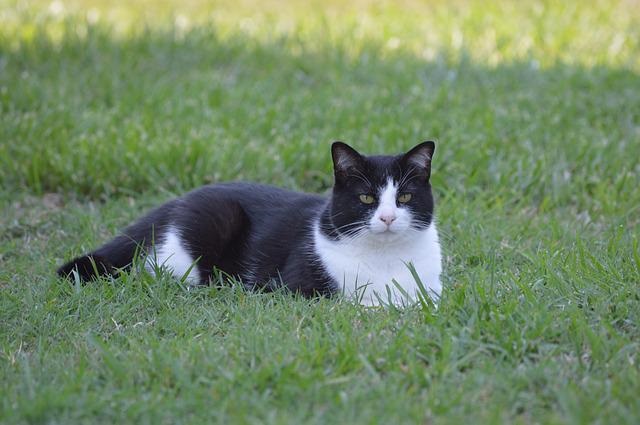 There are some black cats that come with a fair bit of white marking on their bodies. Some of them have a black body and white paws which makes it look like they are wearing socks.

Others have white markings or spots on their bellies and necks.

Such cats are called tuxedo cats.

A cat needs to be black and white to be considered a Tux cat. That’s kinda where the name came from as the bicolor coat pattern makes the cat look like it’s wearing a tuxedo. Especially if there is a patch of white on the cat’s chest.

In my humble opinion, the world’s most famous tuxedo cat is Sylvester from the cartoon Looney Tunes.

He is always trying to catch poor little Tweety bird as a snack.

The Tuxedo cat has also been famous for a few other achievements like being the first cat on Mt Everest, running for mayor and being the richest cat in the world.

Why Does My Black Cat Have White Patches?

Some black cats can start to develop a skin condition or disease that can it to lose their color. This is called Depigmentation and is most obvious in black cats.

If your cat has had an injury and has developed some scar tissue, it can also cause a loss of color in the hair that regrows back in that area.

What Is The Rarest Color For A Cat?

The rarest color for a cat would be the cat without color or the Albino cat. I know what you are thinking.

A cat is considered an albino when the TYR gene which gives the cat color is damaged. A white cat has a functional TYR gene.

The skin of the albino cat appears pink but it’s actually the color of light reflecting blood flow. Shine a bright torch on your arm and you’ll get what I mean.

A white cat is able to have eyes of different colors. Whereas an albino cat has eyes that are devoid of any color. This gives the eyes a light blue or pinkish hue.

Another rarity of a cat would be a male calico cat with blue eyes. If you ever know of one, please do send me a picture.

What Is National Black Cat Day?

I got to admit that I never knew there was such a day called ‘National Black Cat Day’. There is an ‘International Cat Day’ which falls on 8th August.

National black cat day falls on the 27th Oct and it’s meant to celebrate our love of black cats and the low adoption rates that these cats face at pet shelters.

There is still some widespread belief about the ‘evil nature’ of black cats that is affecting their adoption rates.

If you are looking to adopt a cat soon, please give these black cats a second chance. They are as sweet as any other colored cat out there.