Non-cat lovers might call it a weird fetish but for cat lovers like me and you, booping and kissing our cat’s noses is a healthy obsession.

There’s something really cute about the shape and how it fits perfectly on a cat’s face. A cat’s nose is also a very important part of a cat. A cat depends tremendously on its sense of smell.

But why do cats touch noses?

Cats touch noses with other cats as a way to communicate and show affection. Cats go nose to nose to try and decipher the pheromones of other cats and also to use this gesture as a friendly greeting.

Let’s take a closer look at this feline gesture and what it really means in detail.

Why Do Cats Touch Noses With Each Other?

Many cat owners are aware of the mysteries that lie deep within their feline companion. Cats are masters of disguise and don’t wear their emotions on their paws, unlike dogs.

However, the best way to know how welcoming a cat is towards you or another cat is how close the cat is willing to get.

Nose touching between cats is a rather common gesture and can really cute to watch when you catch them in the act.

Before going deeper into this, let us further understand the anatomy of a cat’s nose.

Besides the important act of booping your cat’s nose, the main function of the nose is to take in oxygen and remove carbo dioxide from the cat’s body.

I won’t turn this section into a biology class.

What makes your cat’s nose so crucial to its survival is how it functions in relation to the world. For example, kittens are born deaf and blind but have fully developed touch receptors in their noses to detect their mother and littermates.

Cats are led by their noses and their sense of smell is sensitive enough to detect odors in the air that we humans can’t detect.

Cats have more than 200 million odor sensors in their noses and compared to our 5 million. this already gives them a sense of smell that is 20x more sensitive than ours. There are times when your cat has a wet nose to help trap the scent particle better.

Imagine how torturous it is for your cat when it smells your fart.

Think of the Jacobson’s organ as the central processing unit (CPU) of your cat’s nose.

After breaking down and analyzing the odor, this organ will transmit the information to your cat’s brain which will then determine how the cat will react.

A cat’s nose also comes in all shapes and sizes. You have cats with big noses, slim noses, black noses and even pink noses.

Now that we have a decent idea of the workings of a cat’s nose, let’s discuss what’s up with the nose-to-nose touches.

Give Me A Sniff Of Those Pheremones

You might have heard the term ‘pheromones’ many times before but don’t have much clue about it.

Pheremones are basically a chemical substance secreted in our body fluids that contains information about our current state.

Although we humans can pick up traces of pheromones from another human, we have evolved to depend on other mediums of communication.

Cats pick up a large dose of information about another cat like its sex, age, willingness to breed, etc just from sniffing and analyzing pheromones.

There are scent glands located on a cat’s face that secrete pheromones. One important reason for two cats touching noses is to exchange pheromones.

We humans depend on a handshake and eye contact to learn more about the other party.

Where Have You Been? 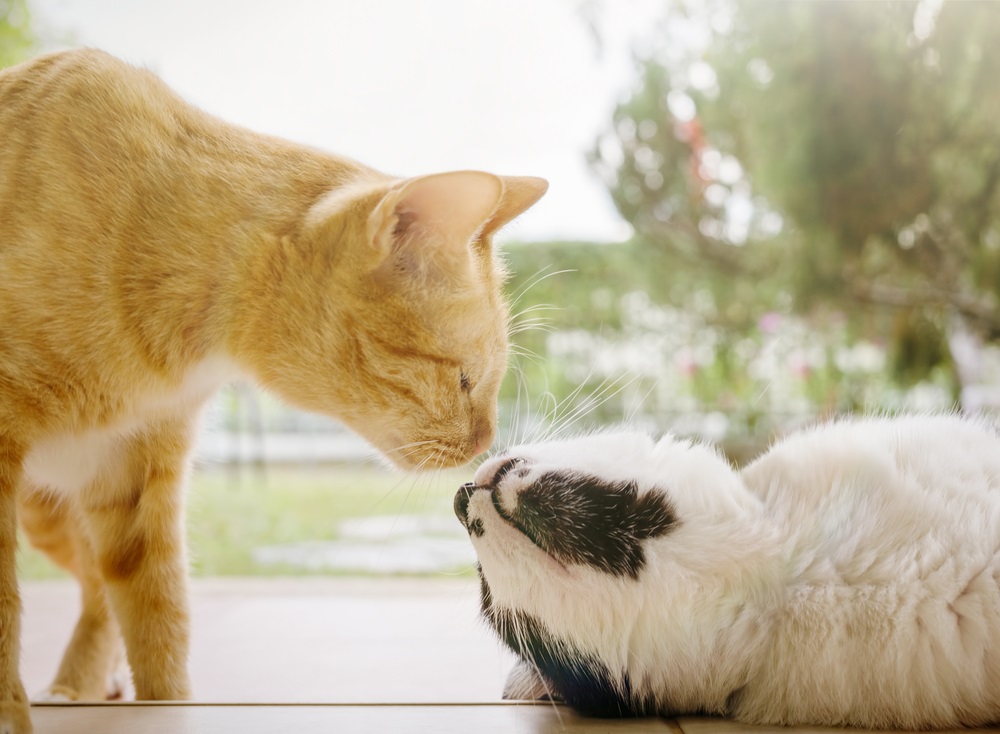 Cats are curious creatures and when meeting another cat, they too like to find out where other cats have been.

A nose touch between cats is for them to find out more information about the other cat’s travel history. Cats tend to rub their faces on objects to impart their scent and collect other smells on their faces and fluffy cheeks.

When cats start going nose to nose, they will also take in all the interesting scents of the places that their feline friend has been to.

If you have more than one cat at home, chances are that they will start sniffing each other’s faces and noses when one comes back from the vet.

Here’s something to be cautious of.

If your cat has spent some time at the vet, there will be many other strange smells on it that can mask its own scent.

Your other cats can start to behave aggressively towards it as the smell signature has changed. For such scenarios, make sure to keep them apart for a while.

I’m Higher Ranking Than You

Cats are solitary animals which means that they will spend most of their lives alone after leaving the nest.

Dogs are pack animals and tend to stay together in a group that is led by an alpha. There is some sort of hierarchy within the pack.

Although cats are solitary in nature, they will still at times try to exert dominance over another cat. You can see this behavior more often in strays and feral cats who are more territorial in nature.

Two opposing cats will be nose to nose with each other and start yowling and meowing very loudly. The same kind of behavior you can see in boxing and MMA matches.

Usually, one cat will back down and give up its territory. If not, a cat fight will ensue between the cat with tuffs of cat fur flying all over the place.

These cats will also mark their territory with their urine to warn other cats to keep away.

Our house cats can get into such spats over their food bowl.

Why Do Cats Touch Noses Then Hiss?

Pets owners who have recently adopted a new cat into the family might find this happening between the new and existing cat.

The new cat touches the other’s nose and one will start to hiss. This means that they aren’t too agreeable with each other’s pheromones and it’s a display of irritation.

It won’t be a problem if they don’t fight but if they do then you need to re-socialize them again.

Do Cats Give Kisses With Their Nose?

A cat’s universal gesture of affection is called an ‘eye kiss’. This is when a cat will calmly look at you and gently blink its eyes at you.

Cats do this with people that they trust and that’s huge in the feline world.

You can reciprocate the gesture and kiss the cat back by slowly blinking your eyes back at the cat.

Cats don’t understand the underlying meaning of a kiss like we humans do. It isn’t something that cats do when showing affection to one other cat.

However, most cats are intuitive enough to know the positive association that is tied to kissing.

My cat goes into full purring mode when I start kissing his cute chubby face.

Kissing to cats might also seem like head bunting where two cats will bump and rub heads with each other to show affection and friendship.

As a cat owner myself, booping my cat’s nose with my finger or my nose is a very satisfying moment.

It feels even better when my cat doesn’t move and just purrs himself to sleep.

If a cat allows you to boop its nose, chances are that the cat is already very comfortable and familiar with you.

I wouldn’t recommend you do it to a cat that you just met or is showing signs of aggression towards you.

Failure to heed my advice might result in your finger getting bitten or a bloody human nose.

Why Should You Not Touch A Cat’s Nose?

There’s no hard and fast rule as to where you should not touch a cat. It all depends on how comfortable you are with that cat in particular.

The rule of thumb is to not touch the nose of cats you are not familiar with. Many cats are very particular about being touched on the face or nose by a stranger.

Why Do Cats Boop You?

When a cat boops you with its head, that is a good thing. This means that the cat is rubbing its scent on your which means that you now belong to the cat.

In return, the cat is trying to get your scent on its face so that it can remember what you smell like.

Feel free to boop your cat back with your head to show your appreciation of the loving gesture.

Cats are both amazing and mysterious at the same time. As humans, we might never understand the complexities and importance of smell to a cat. But as cat owners, it is important for us to understand how our cats use smell in their lives.