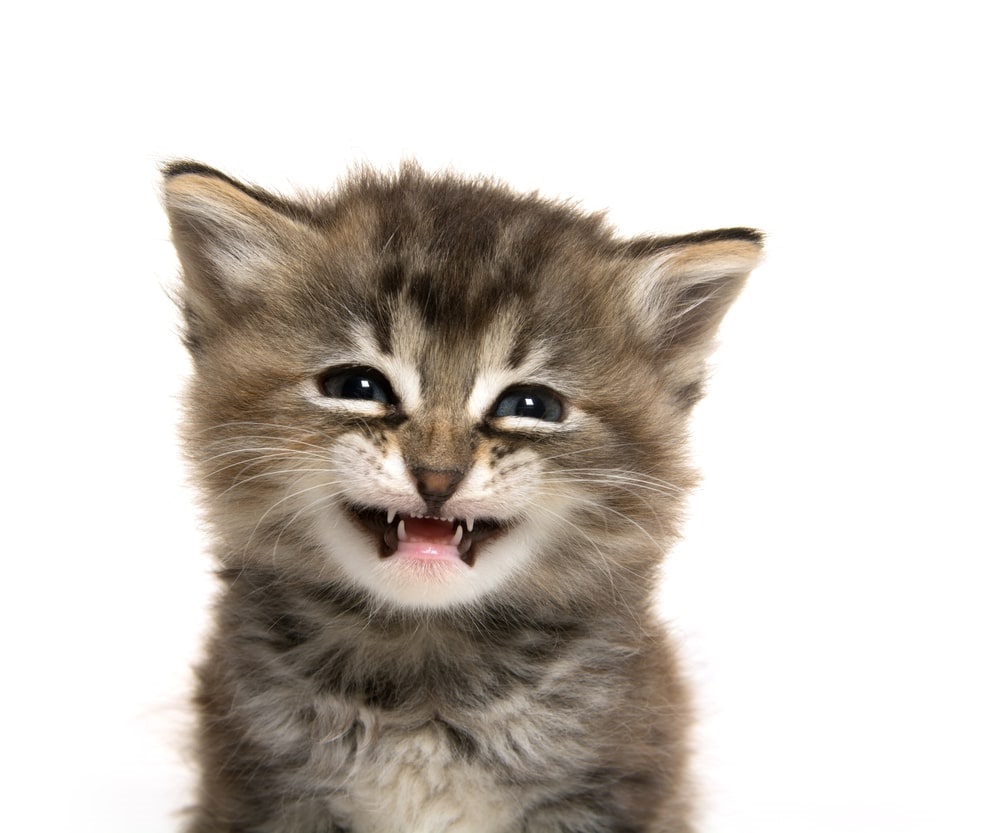 Cats are interesting creatures to watch and observe, even while they are sleeping.

I’m sure many cat owners have caught their cats staring blankly into space with their mouths hanging open coupled with a strange expression on its face.

What is this strange cat behavior?

Is the cat’s mouth in pain?

There are a couple of reasons that we will explore further down the article.

Cats primarily breathe through their nose like most land animals. When cats open their mouths, it is usually to vocalize their intentions.

One of the most common explanations as to why a cat would keep its mouth open is due to the Flehmen response.

What Is The Flehmen Response In Cats?

When a cat exhibits the Flehmen response, it basically means that it’s noticing and taking note of a certain smell, scent or odor.

This can be observed when a cat keeps its mouth open slightly after a long sniff. You might even see your cat giving this expression on its face after smelling your breath which consists of many interesting odors.

Most of the time, this is done to ‘capture’ the pheromones in another cat’s urine. But the cat will also do this when it is intrigued by an interesting scent.

Many cats communicate with other cats by using pheromones. Each cat has its own unique pheromone signature which tells other cats different messages.

Pheremones are used when cats are marking their territories or when they are ready to mate. Cats can decipher the pheromones of another cat by touching noses and analyzing the odors of the other cat.

We, humans, have our own pheromone signatures as well. Though not as complex as that of an animal as we have evolved to use other methods of communication, it still plays a part in our lives.

A cat is able to trap pheromones of other cats in its tongue and then transfer the pheromones to the roof of its mouth where a duct exists.

When a cat does this, it looks like it is sneering which adds a touch of comical adoration to its face.

An interesting fact is that a male cat exhibits the Flehmen response more often than a female cat. This is due to the higher levels of testosterone in male cats which makes them more attuned to weeding out fertile females for mating.

The Jacobson’s Organ or the Vomeronasal Organ are sensory structures in your cat’s mouth that allow the Flehmen Response to happen when a cat keeps its mouth open after smelling something peculiar.

The cat will curl back its upper lip resulting in a silly-looking sneer or ‘stinky face ‘that a cat does during the Flehmen Response.

By keeping its mouth slightly open, the cat draws the pheromones or scent particles through its mouth rather than the nose.

The scent is then analysed and broken down by the Jacobson’s Organ and transmitted to the cat’s brain.

This action happens more frequently with unsterilized or feral cats during mating season.

It is probably hard for us cat owners to understand what goes through our cat’s minds when this happens. But it allows the cat to smell the taste. Hence the way to a cat’s stomach is through its nose as they have no tastebuds.

Should Cat Owners Be Concerned?

It is a very normal and natural response for cats. Just like how we breathe and analyse smells. It’s just one of the many weird cat behaviors that our feline friends do from time ot time.

However, pet owners should know how to differentiate a Flehmen Response vs panting. A cat can pant when it is tired.

The cat will have its mouth opened and tongue partially hanging out while taking shallow and rapid breaths.

Is It Normal For Cats To Pant With Their Mouth Open?

As mentioned above, it is normal for many cats to pant after an intense playing session, chasing prey or when it’s stressed.

However, if panting is a common occurrence in your cat’s behaviour, it could be a signal of more serious medical conditions.

Cats can also get asthma, like us humans. It is basically a chronic inflammation of the lungs. Asthma in cats is triggered by stress or specific allergies, causing the cat acute respiratory distress.

However, it is a condition that can be managed with medication from the vet.

If your cat has an existing or undetected heart condition, it can cause your cat to pant. This can happen to kittens and not just to a senior cat. There’s a genetic condition where a cat can have weakened heart muscles which makes it difficult for the heart to pump blood efficiently throughout the body.

Cats are able to regulate their body temperature well but there are days when the heat is too much for them.

If you see your cat panting on a very hot day, try to cool down the room by drawing the shades or turning on the aircon.

A cat can start panting when it’s feeling stressed. This can be due to an external scenario that it feels helpless in. For example, being in a carrier and going to the vet, being near other animals that it is fearful of.

There’s not much that you can do if you are bringing your cat to the vet. You can try putting your used t-shirt in the carrier to see if your smell calms it down.

In circumstances where you can remove your cat from the stressful situation, please do so as quickly as possible.

Believe it or not, cats can also catch a cold like humans.

When a cat catches a feline cold, it could have an infected respiratory tract, causing it to pant. Your cat will also be sneezing or coughing.

This is a blood disorder where there aren’t sufficient red blood cells in your cat’s blood. This results in less oxygen being carried in the bloodstream thus leaving your cat feeling breathless.

Cats are masters of disguise when it comes to hiding pain or other medical issues. However, a cat in pain might exhibit signs of panting. This will also be accompanied by lethargy, rapid pulse, fearful behavior, etc.

What Should I Do When My Cat Is Panting More Than Usual?

When you see your cat start to pant, remain calm and do what you can to keep your cat comfortable.

The next best thing that you can do for your cat is to bring it to the vet asap.

There are a few tests that your vet can do to try and determine the cause of your cat’s panting. The earlier the vet is able to diagnose the issue, the better the chances of helping your cat.