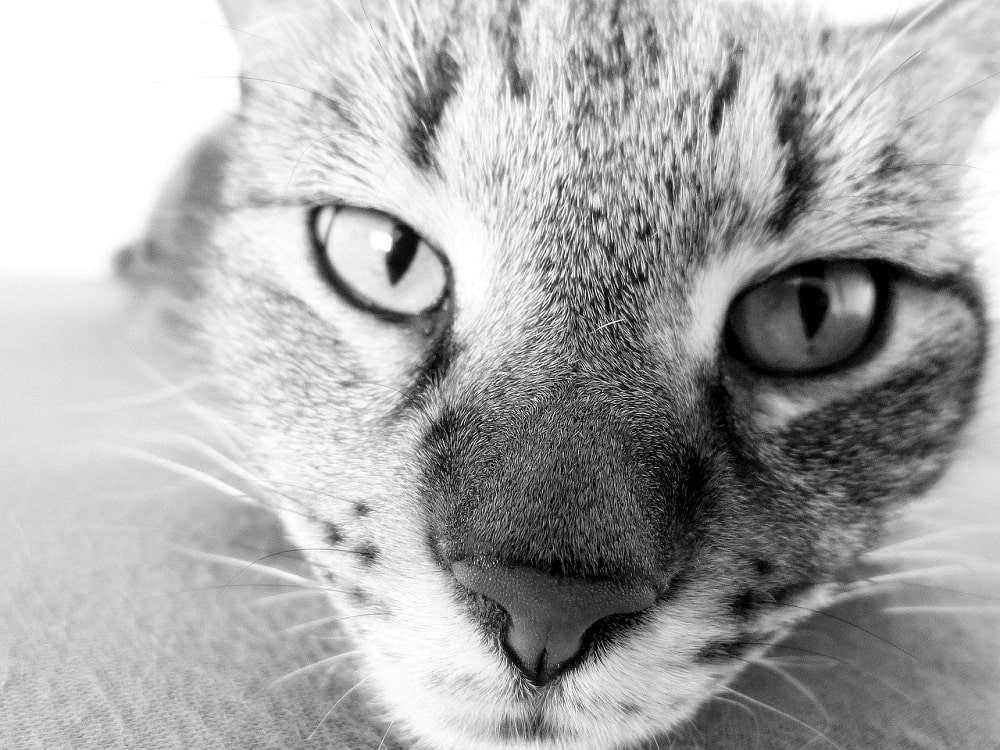 One of the cutest things to me about a cat is its nose.

There is something very adorable about randomly ‘booping’ your cat’s nose while it is napping or awake.

Planting kisses on my feline friend’s nose is also one way how I show love to my cat even though he’s not a fan of it.

The funny thing is that many cat lovers are interested in cats with the longest tails or the cat breeds that are most affectionate.

How many are aware of cat breeds with big noses?

According to the International Cat Association (ICA), there are 71 known and registered cat breeds in the world.

Every cat breed has its own unique personality and physical traits. Some cat breeds have very distinct features like the Sphynx, which is bald.

When it comes to a cat’s nose, it can also vary from cat breed to cat breed in terms of length, width and in some cases, shape.

By looking at the side profile of a cat’s nose, you can tell more accurately how unique the shape and size of its nose is to that particular breed.

If you have a thing for cat breeds with larger than average noses, here are the breeds that are are blessed with big honkers. 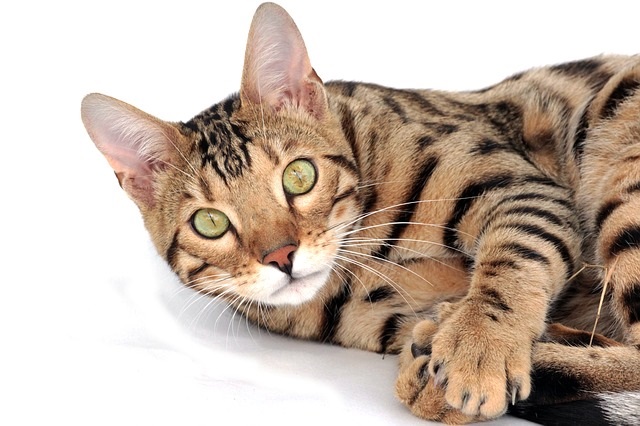 Many have mistaken Bengal cats as domesticated wild cats. With their striking and distinctive spotted or marbled fur markings, it is easy to understand why.

As wild and undomesticated as they might look, Bengals make great house pets due to their inquisitive nature, affectionate and loving personalities.

The Bengal cat breed came about in the 1970s when a lady in the USA named Jean Mill cross-bred an Asian Leopard cat with a domestic tabby cat.

Over the years, the Bengal has grown in popularity due to its exotic looks which can also come with a huge price tag.

But the Bengal cat wouldn’t be on this list if it had a small nose.

Wild cats usually have puffier and bigger noses than domesticated cats. This is because they need a more sensitive nose for hunting and mating in the wild.

Given that the Bengal has some wild cat genes in its heritage, it’s not surprising to find a bigger cat’s nose on this breed.

Besides having a wider and taller nose than most cat breeds, the Bengal also has puffed-up nose leather which adds to the overall size of its nose. Some Bengals have nose leather that can even puff up beyond its chin. 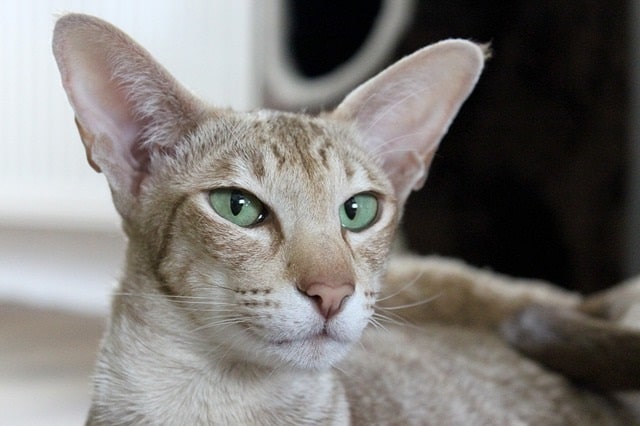 If you’ve never seen an Oriental Shorthair in real life before, don’t be shocked by the size of this cat’s nose if you do.

The Oriental Shorthair always command attention when it walks into the room. With its long, lean sinewy body and huge ears, it is hard not to notice it.

This cat breed has its roots very closely tied to the Siamese cat.

Siamese cats originated from Thailand and became very popular in Europe during the early 1900s. Unfortunately, due to WWII, the Siamese breed was in danger of being extinct. Owners started cross-breeding their Siamese with other breeds like the Russian Blue and Abyssinian.

It was through this crossbreeding that the Oriental Shorthair was created.

Just like the Siamese cat, Oriental Shorthairs are also very vocal and inquisitive. This cat breed needs lots of attention and affection and is not suitable for owners who are not around most of the time.

A lonely Oriental Shorthair is a depressed cat.

The cat is also great for owners who want a hypoallergenic cat. Such cats produce less of the allergen ‘Fel d1’ which is the cause of cat allergies.

Not only does this breed have huge bat-like ears but their noses are also very long and wide.

Similar to that of a lion.

The Oriental Longhairs are very similar to their shorthair counterparts. The only big difference is that this breed can come with a long coat.

However, for the Oriental Longhair, it doesn’t have an undercoat which means it sheds much lesser than your typical long hair cat.

An ideal breed for someone that wants a long-haired cat and a large nose without the additional grooming.

The Chausie cat (pronounced as “chow-see”) is another cat breed with a wide and distinct nose profile.

Some of you might think of the Bengal when looking at this cat as they do share some similar physical traits. The huge differentiating factor is that the Chausie usually comes with a solid coat color instead of spotted or marbled.

Chausies were bred from crossing a jungle cat and a domestic cat. The aim was to create a breed that had the look of a wild cat but the gentle demeanor of a house cat.

This breed can grow to be pretty large, almost as huge as a Maine Coon. They have strong muscular bodies, a long muzzle that is accompanied by a large nose with puffy nose leather.

They are playful and good-natured cats that like bonding with their owners. If you want a cat that enjoys going for walks, the Chausie on a leash will make a good walking companion for you. 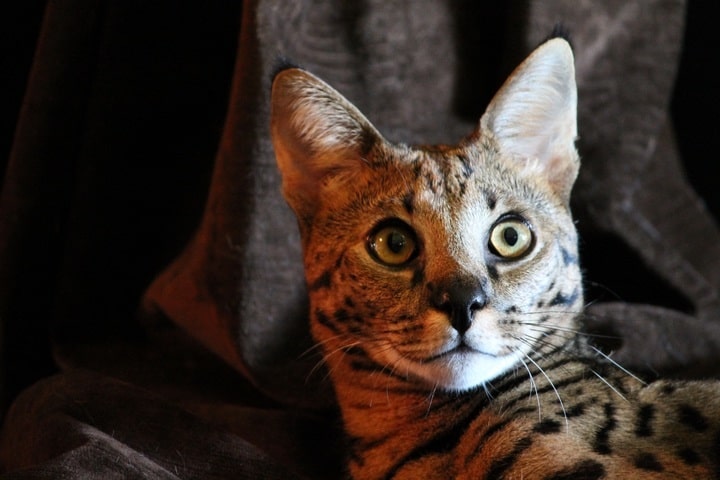 The Savannah cat is one breed that has been growing in popularity due to its wild and exotic looks. This breed is a cross between your domestic cat and a Serval which is a large-eared African wild cat.

The Savannah is also a large cat. Not so much in terms of broadness but more in length. Despite its wild appearance, the Savannah is a very energetic and playful cat. If you are looking for a cat that likes chilling on the sofa with you, this cat is definitely not for you.

They are very loyal cats that love following their owners around the house like a dog. They are excellent jumpers and love to seek out high places.

Just like the Bengal, this cat’s nose resembles that of a wild cat. It has a long big nose and puffy nose leather.

It is hard to ignore a cat whose ears are larger than its head. That is the Cornish Rex for you.

Another interesting feature about this breed of cat is that it is almost bald. It has a very thin undercoat that feels like velvet.

Due to the lack of fur, such cats don’t do too well in cold climates as they can’t keep themselves warm. Most Cornish Rex owners will put on a cat sweater for their cats when the temperature drops.

The first Cornish Rex was born in the 1950s on a farm due to a genetic mutation. Over the years, this cat breed has been gaining in popularity due to its unique looks and loving personality.

The Cornish Rex has a rather long and wide nose which looks a lot bigger on its small and triangular head.

Interesting Facts About Your Cat’s Nose

A nose is more than just for smelling when it comes to cats. Here are some interesting facts that you should know about your cat’s nose.

Do you know that your cat’s fur color determines the color of their nose?

The cat’s nose is the most important sense organ for them. They have more than 200 million scent receptors in their nose, making them ultra-sensitive to smell.

When it comes to tasting food, a cat’s nose stimulates its appetites. Cats have very few taste receptors as compared to humans. They rely on their scent of smell to determine what something might taste like and whether it is safe to eat. It is also common to see cats touch noses as a sign of communication.

During mating season, most cats will also use their sense of smell to find a mate. Outdoor cats will start marking or spraying on walls which leave very strong odors in the air.

A cat can use their noses to pick up this scent to determine the location of the cat and its propensity to mate.

And if your cat doesn’t like it, it won’t use it.

Every cat has a nose that is unique just like a fingerprint. Each nose comes with its own unique pattern of bumps and ridges.

If you have a few cats at home, compare their nose prints and you’ll see what I mean.

Do Boy Cats Have Bigger Noses?

Yes, boy cats have bigger and wider nose wings as compared to females. This is due to male cats being bigger in size. The differences in facial features are more subtle as compared to physical size between genders.

If you are looking for a cat with a big nose then the above cat breeds will definitely suit the bill.