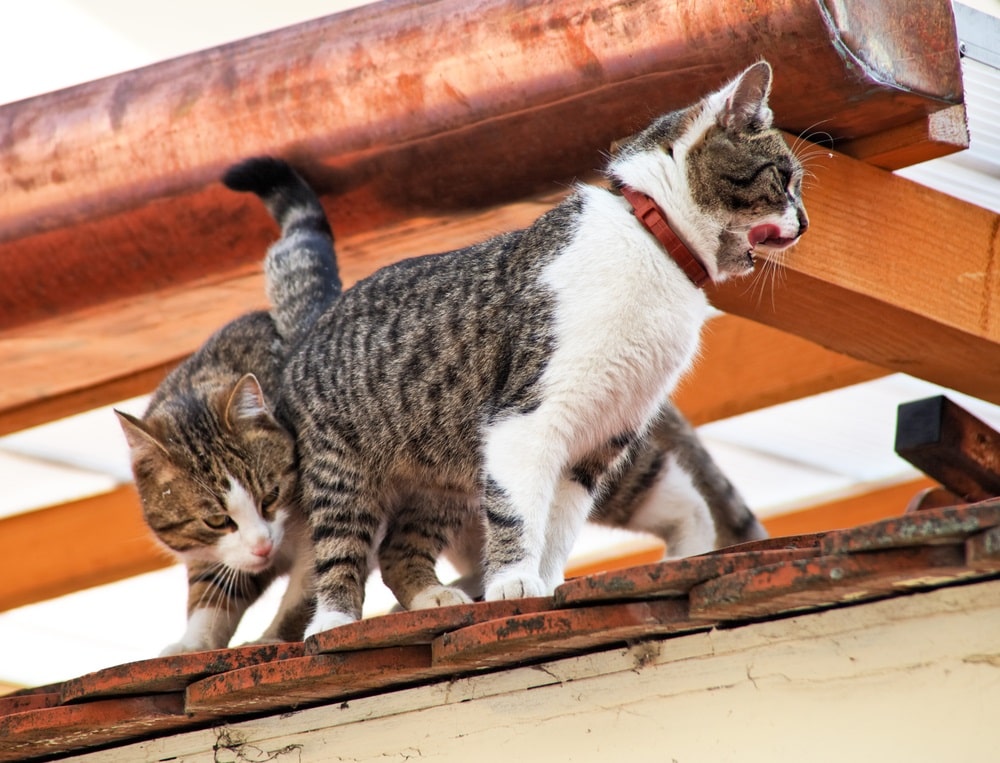 Cats are often regarded as being clean, fussy and well-groomed creatures by many people. However, ask any cat owner and they will tell you that that’s not entirely true.

Cats still do lick each other’s butts on a regular basis without gagging or showing any distaste. This can be commonly seen in multi-cat households or cat colonies. Don’t cats find this action mildly ‘disgusting’?

Let’s get to the bottom (pun intended) of this weird cat behavior.

Why Does My Cat Keep Sniffing and Licking My Other Cat’s Bum?

As weird a behavior as it might seem to us humans, it is considered a necessity in the kitty world.

Cats groom themselves often and can spend a large portion of the day grooming themselves, almost up to 5 hours daily.

Kittens are born deaf and blind thus making them totally dependent on their mother cat. Not only will mother cats be busy feeding their kittens but grooming their little ones is the next most important job.

Besides bathing her kittens with her tongue, a mother cat licks her kitten’s bum to encourage them to poop and pee which she then consumes to prevent the nest from getting dirty.

This bond between the mama cat and her kittens is called anogenital licking and it stops once the kitten is old enough to be independent.

This ties in with the first reason when kittens are groomed religiously by their mother. If you have more than one cat at home, you will notice them licking each other’s bottom as well when grooming each other.

Cats show care and cohesion with each other within their own social circle with grooming. By licking each other, they are also imprinting their own scent on the other cats so that they can recognize each other. You might even find your cats grooming another one of your pets this way.

Licking each other’s bottom is an instinctive grooming process for them that has been instilled since they were kittens.

A Form Of Greeting

It can be very adorable seeing two cats greet each other. They will approach each other in a relaxed manner with their tails held high. You can usually tell how the cat is feeling but observing its tail.

Once they make contact, the first thing they will do is smell the other cat and start rubbing the side of their faces together. This is usually accompanied by purring and licking.

The action of bumping and rubbing of heads is called bunting and it is also something that cats do to humans that they trust.

Cats communicate primarily via smell and by leaving their own scent signature on another cat, it is telling the other cat “Hey, this is my smell, let’s be friends.”

When a cat smells another cat, they are putting the 200 million odor receptors to good use. Cats have a sense of smell that is 14x more sensitive than ours and can pick up scents that we can’t even detect if it hits us in the nose.

Scent Glands On A Cat

These scent glands contain feline pheromones that are just unique to that cat.

When a cat lifts up its tail in the presence of another cat, it is a friendly signal. It’s the cat’s way of telling the other cat to sniff and lick its bottom.

When cats lick and smell each other’s butt during a greet, there actually try to register each other’s scent.

When cats lick each other’s butts, it isn’t about being curious about what it tastes like. The cat is trying to analyze the scent of the other cat.

A cat’s tongue is able to trap scent particles. The cat will then curl its upper lip which makes it look like it’s sneering. This action is actually called the flehmen response.

It allows the cat to pass the scent particles to the Jacobson’s organ to break down and analyze the scent before sending the message to the brain.

Getting Ready To Mate 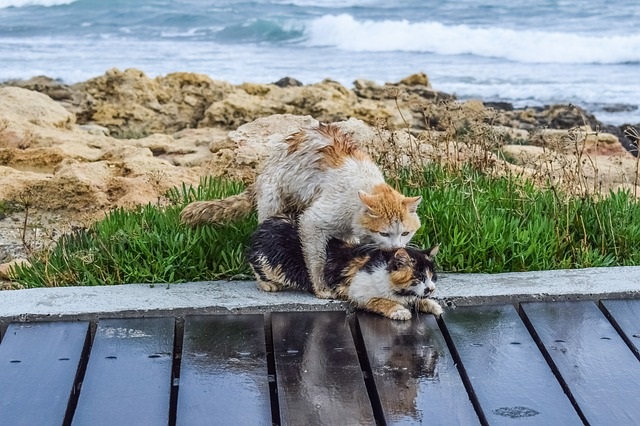 Cats can reach sexual maturity as early as 6 months of age. During this period, their behavior can change drastically.

They can transform from being needy and cuddly to cats that just can’t stop peeing at home, yowling all day long and trying to escape outdoors.

Cats do this to mark their territory and seek out other cats to mate with. As a cat parent, you know how terrible the smell can be when you find your cat’s pee on your bath mat during mating season.

To prevent such a thing from happening is to spay or neuter your cat. There are other health benefits that come with sterilizing your cat and it helps to control the overpopulation of cats.

When a male and female who are ready to mate meet, they will start to engage in a mating ‘dance’. Both cats will display lots of curiosity and contact with each other via licking, smelling and rubbing.

Even though cats are not pack animals like dogs, there is a certain hierarchical structure amongst cats. There will most likely be a dominant cat within the group. This can be the cat who is more aggressive in nature or the oldest one in the group.

The more dominant and confident cats will be the ones who will initiate grooming with other cats or pets at home.

This is different from social grooming whereby both cats will engage in mutual grooming. In this case, only the dominant cat is grooming and licking the other cat’s or pet’s butt to show who’s boss.

Why Don’t Cats Get Sick From Licking Themselves? 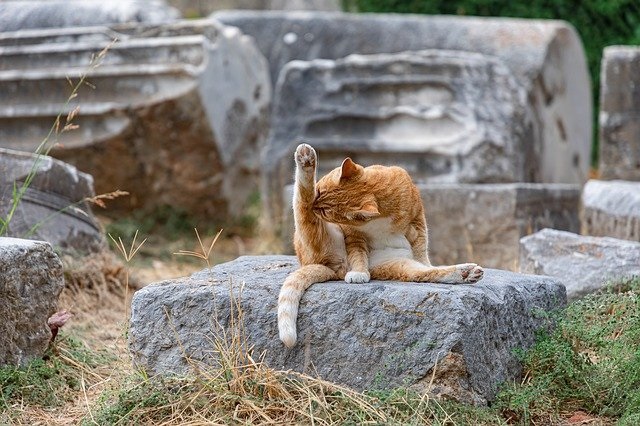 Cats don’t fall sick from licking their own butts or the bottoms of other cats. This is because the immune system and digestive tract of cats are well equipped to handle the bacteria and pathogens that are found in their waste.

This is why dogs and cats are suited for eating raw food without getting ill like humans. It is the most natural diet for them and it is what gives their bodies the best form of nutrients.

Should You Stop Your Cat From Licking Itself?

No, you should not stop your cat from licking itself. Grooming to a cat is very important. Their way of ‘bathing’ gets rid of dust and dirt from their fur.

You wouldn’t want someone to stop you from showering.

Another purpose of licking itself is to remove any foreign smell on them. You’ll notice that your cat will groom itself with some excessive licking after a shower or a visit to the vet. This helps to place their own scent back on their bodies.

This is why cats in the same household can turn aggressive on the cat that just got back from the vet as it smells very different from what they are used to.

One thing to look out for is when your cat is excessively grooming itself. This can cause bald patches and irritation to your cat’s skin. An underlying medical condition or stress can cause such a condition.

It would be best to bring your cat to the vet for a proper checkup.

Why Do Cats Lick Each Other Then Fight?

It can be rather a common occurrence for cats to get in a bit of a tussle when grooming and licking each other. There is such a thing as ‘over-stimulation’ for cats.

This is when a cat goes into sensory overload from being groomed or stroked for too long. A cat’s body is very sensitive to touch and too much of it can start to feel painful to your cat.

You can find your cat purring and enjoying your strokes for a few minutes before starting to get aggressive with your hand. You should stop petting or stroking your cat once it starts to show irritation like the thumping of its tail or hissing.

The same thing can happen to cats that overgroom each other. The continuous licking can start to feel uncomfortable after a while.

It is a natural reaction for us to dismiss butt-licking between cats as kinda gross. It can be from a medical point of view. But for cats, it is very much part and parcel of being a cat and maintaining a friendly relationship with other cats.