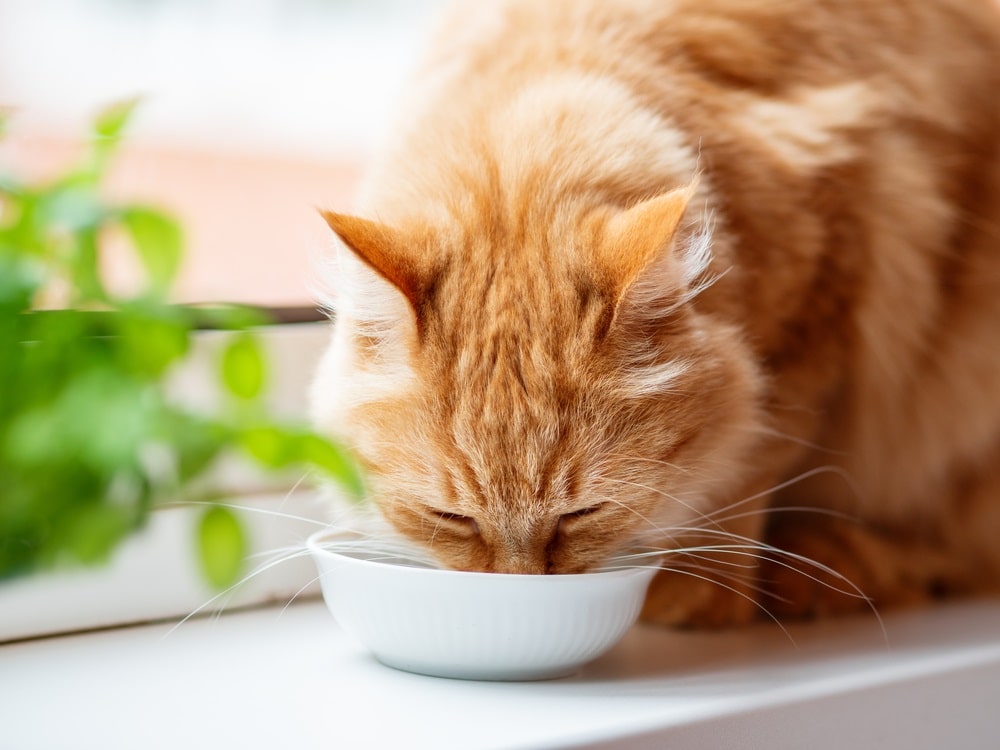 My first impression of cats as a kid was that they love eating fish. Almost every animated series or Disney cartoon portray cats as big fish eaters.

Heathcliff comes to mind and Garfield but he’s more of a lasagna kinda cat (which is just bad for cats in real life).

I know of many cat owners that give their cats tuna and tuna water on a regular basis.

But how healthy is it for our cats?

Cats are obligate carnivores that require a high-protein diet from a meat source.

Is fish considered to be a good source?

Technically yes since it is classified as a meat source.

A little fish treat for your cat every now and then helps to add some variety to their diet and provide some healthy Omega-3 fatty acids.

It is better to choose fatty fishes that are high in monosaturated fat like salmon, tuna, sardine or mackerel.

Do Not Feed Raw Tuna

One thing to note is that the tuna that is given to your cat must not be raw. Even though we are advocates for a raw food diet for cats, raw tuna can be bad for cats.

Raw fish contains an enzyme (Thiaminase) that interferes with the absorption of Vitamin B in your cat. This is a very essential vitamin for your cat as it supports the following health functions:

Cats that are suffering from a vitamin B deficiency will show signs of weight loss, lethargicness, diarrhea or vomiting.

The kind of ailments we don’t ever want our cats to suffer from.

Ensure that the tuna is properly cooked before feeding some to your cat. 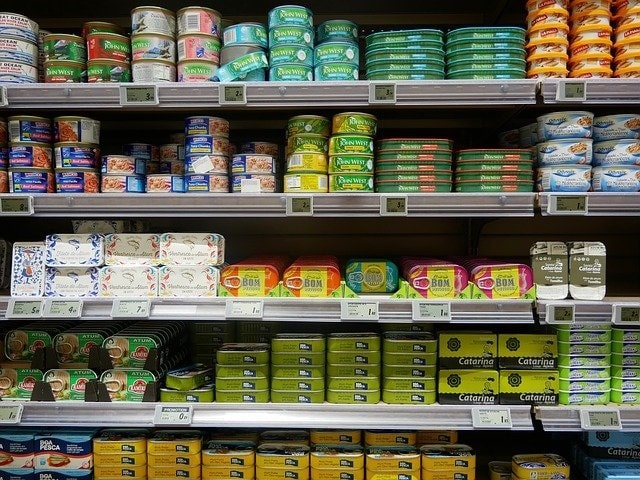 Yes, it is in moderate amounts. In fact, tuna water is a good way to help cats with poorer appetites. The way to your cat’s stomach is through its noise.

They have a great sense of smell and can ‘taste’ food just by smelling it.

By adding Tuna juice or water to cat food, you are making the cat’s food more appetizing which can stimulate your cat to eat more.

This is a useful technique for cats who are recovering from surgery or for older cats.

That being said, there are a couple of things that you should be aware of before feeding your cat tuna water.

Tuna Water As A Means Of Hydration

Cats are notorious for not drinking enough water over their lifetime and this can lead to chronic kidney disease (CKD) as they get older. In fact, 1 out of 3 cats will get CKD.

One way to prevent this is to make sure that your cat drinks more water.

It is hard to just place a bowl of water in front of your cat and tell it to drink. You will probably get ignored unless you have a Siberian or Maine Coon which are cat breeds that are naturally attracted to water.

One good way to entice them to increase their water intake is to give them some tuna water or homemade tuna broth. I have some cat owners who ask me if feeding Gatorade to cats can help with hydration?

This isn’t something I would recommend due to some ingredients in Gatorade which are fine for humans but not for pets in general.

Is Too Much Tuna Water Bad For Cats?

It is ok to give your cat a couple of tablespoons of tuna water every now and then but don’t overdo it.

You don’t want your cat to ignore its regular food and just drink tuna water which hardly contains any nutrients.

Choosing The Right Kind Of Tuna For Your Cat

Not all canned tunas are made equal. It is important that you know what you are buying before you feed it to your cat.

Here are some tips you can use when choosing the right type of tuna to make tuna-flavored water.

It is fine for cat lovers to feed their cat human-grade tuna or tuna juice from the supermarket. But please read the ingredients label before deciding which canned tuna to get for your cat.

You only want to get tuna in water or mineral water. This makes it easy for you to drain off the tuna water or juice for your cat.

Avoid any canned tuna that comes in sauces, chili, oil or preservatives. All these additional ingredients can cause a bad reaction like diarrhea or vomiting when consumed by your cat.

A cat that has hyperthyroidism can show the following systems:

Always be sure to know what is in the tuna juice before feeding it to your precious cat.

Having sodium in our food isn’t a bad thing. It plays a part in helping to maintain a healthy body in both humans and cats.

Sodium itself helps ensure proper nerve and muscle cell functions and the key is to ensure that the sodium levels in your cat is balanced out with other nutrients and minerals.

If you are feeding your cat dry cat food or kibbles, be careful of your cat’s total sodium intake as such cat food can be laden with sodium.

Buying tuna juice that is high in sodium won’t be too good for your cat. Too much sodium in a cat’s diet can cause high blood pressure and water retention.

To err on the safe side, get tuna that is lower in sodium levels.

BPA stands for bisphenol and it is a chemical that has been used to make certain plastics and resins for industrial use.

BPA is commonly found in plastic packaging for our food and water. It is also found in epoxy resin that is used in the production of food cans.

Why BPA is bad for us because there is a possible link between BPA and increased blood pressure, heart disease and diabetes.

BPA can also damage the liver, kidneys and reproduction organs in both humans and animals.

If possible, get canned tuna or tuna water that is stored in BPA-free packaging.

How To Make Tuna Water For Cats?

I will be sharing with you two very simple ways that I use to make tuna water or tuna broth for my cat. It is fast, simple and can last a long time.

One method I use that can really maintain the freshness of the tuna water is to freeze it into ice cubes. Just pour the cooled tuna water into an ice cube tray and melt one or two cubes when you want to feed your cat.

The next method that I use is pretty similar to the first. But instead of using canned tuna, I will use dried bonito flakes.

It is possible to get a packet of flakes from your pet store that is grain-free and also without any sodium or preservatives.

It’s basically dried skipjack tuna which I like as it has the lowest level of mercury among all the tuna varieties.

Just add a handful of dried bonito flakes to a boiling pot of water and let it cook for a few minutes. Once cooled you can also freeze it up as cubes for later use. 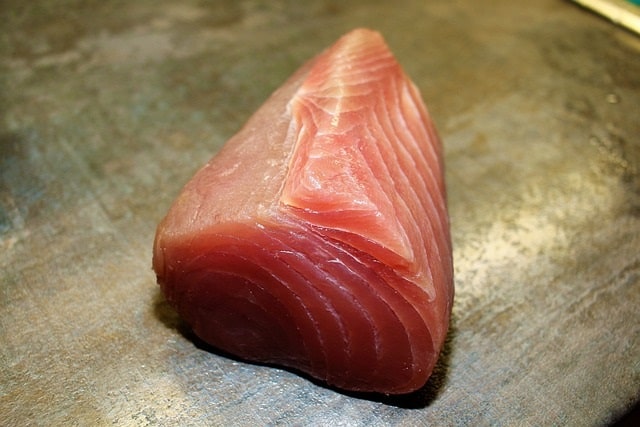 It is ok to feed your cat some cooked tuna fish as a treat occasionally. The weird thing is my cat is more attracted to the tuna broth and completely ignores the tuna meat.

Do not use cooked tuna meat as staple meat for your cat. Even though cooked tuna is safer than raw tuna, it still contains some levels of mercury in its flesh.

Mercury is an element that doesn’t break down and is found in rocks, water and soil. This element finds its way into wildlife when they eat plants and animals that already contain mercury.

The higher up the food chain the animal is, the higher the mercury levels in the body.

Tuna is high in the aquatic food chain hence it is known to have higher levels of mercury than most fishes.

Too much tuna in your cat’s diet can lead to mercury poisoning if ingested in large quantities.

As mentioned, it is totally fine for your cat to drink tuna water and in many cats, drinking more water is always a good thing.

Just remember to offer your cat tuna water or tuna fish as a treat and not part of its regular diet.