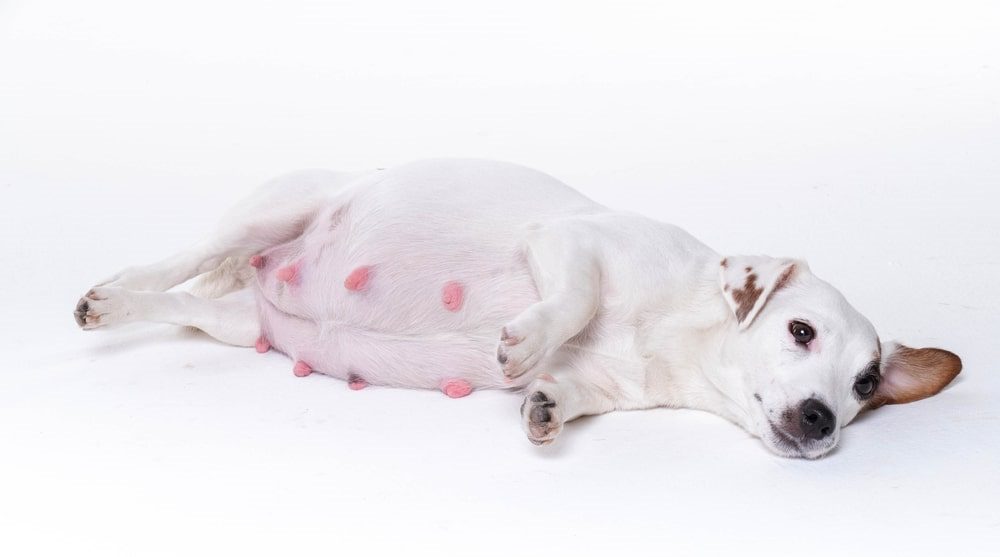 I had a rather interesting conversation with my good friend the other day. The conversation was centered around the topic of ‘nipples’.

Oh, get your mind out of the gutter.

We are talking about dog nipples and inverted nipples in dogs to be exact. This issue does happen in humans but not many dog owners are aware that their dogs can have an inverted nipple too.

An inverted nipple in dogs is actually more common than you think. It can happen to both female and male dogs. However, it tends to occur more often in pregnant or nursing dogs. An inverted nipple is usually just a cosmetic issue but it can be a health problem in some dogs.

In this post, we will be taking a closer look at what can cause an inverted nipple in dogs and should you, as a dog owner, be worried if your dog has one?

Why Does My Dog Have An Inverted Nipple?

If this topic has not prompted you to take a closer look at your dog’s nipples, it might be a good idea to check it out now.

An inverted nipple is basically a nipple that points inwards or lies flushed against your dog’s belly. It can happen in one nipple or more than one nipple. A dog’s inverted nipple might also be a darker color compared to the normal ones.

A dog should have protruding nipples or nipples that are pointing outwards.

Most dog owners don’t notice this issue on their dogs as their nipples are mostly covered up by their fur.

Some dogs are just born with inverted nipples as part of their natural development. Dog nipples can also get inverted as they mature which can signal a health problem.

Intact female dogs are more prone to having inverted nipples during their pregnancies or when they are nursing their puppies.

Are Inverted Nipples In Dogs A Health Problem?

For most dogs, having an inverted nipple is just a cosmetic issue and won’t pose any health risk to them.

However, there are a few scenarios whereby inverted nipples can be a bit of a problem for your dog. 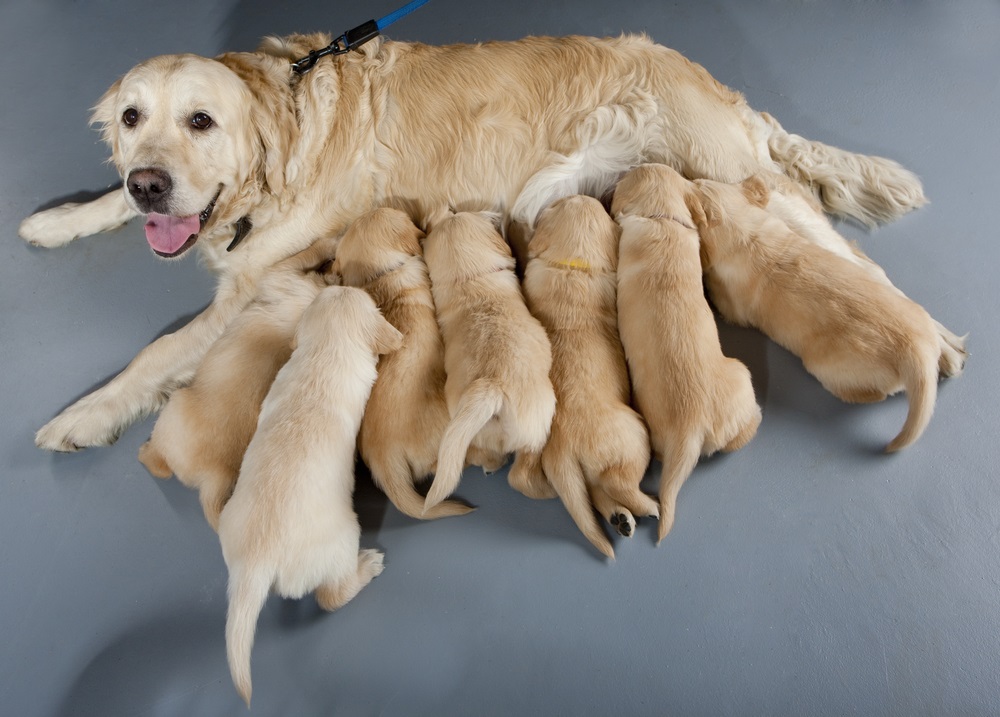 Intact female dogs that are nursing their puppies have a full-time job of making sure that their pups are well fed.

Imagine if your female dog has a litter of 6 puppies and 2 out of her 6 nipples are inverted. This means that only 4 puppies can feed at one time.

Puppies require constant feeding and if they don’t get enough nutrients, it can dampen their growth and cause other health problems.

This situation can be made worse if some of the stronger pups are ‘nipple guarding’ the best milk-producing nipples.

There are a few things that dog owners can do to ensure that all the puppies are well nursed.

Make it a point to weigh each puppy daily and record the results. This will allow you to know which puppies are underweight and need more feeding time.

Charting their weight gain progress makes it easy to also identify puppies that have been hoarding mommy dog’s nipples.

When the puppies are suckling on the nipples, keep a close watch for ‘nipple guarding behavior. These puppies will display defensive body language or aggressive behavior like growling when another pup tried to take over the nipple.

Remove these pups once they have been nursed and place the less dominant pups at the nipple to allow them to feed.

Try To Invert The Nipples

It might be possible to try and expose the inverted nipple by gently pulling at it or compressing the area around it.

Try placing a bigger and stronger pup at the inverted nipple as it might be able to suck hard enough for it to pop out.

One way to manage the puppies is to try and hand feed the larger and heavier pups. It is definitely not a good idea to not feed them as they still require their daily nourishments.

By hand-feeding the heavier puppies, this frees up the normal nipples for the weaker or smaller puppies to feed on.

This method works well if the female dog isn’t producing enough milk for the entire litter. Don’t just feed your puppy any type of milk. Speak to your vet first and get the correct milk formula.

Mastitis in dogs is a condition whereby the inverted nipple gets infected. Not all inverted nipples will get infected but there is a higher risk due to how the nipple is positioned.

This is more common in nursing dogs where the mammary glands get infected. But male or non-nursing female dogs can also get affected by this condition.

A dog’s inverted nipples infection is usually caused by a bacterial infection or pathogens.

Dogs that are experiencing from mastitis will have some pain and discomfort. Here are some common symptoms:

The biggest tell-tale signs would be a swollen crsuty-looking nipple. It would be best to get your dog to the vet to have the nipple infection taken care of.

The vet will have to clean the infected nipple properly and antibiotics might be required to clear up the infection.

More importantly, severe cases of mastitis can be fatal in dogs. The untreated bacterial infection can start to turn septic and affect the other major organs of the dog.

How To Clean An Inverted Nipple In My Dog?

The best way to prevent any sort of infection from happening to the inverted nipples is to keep them clean.

And to keep it clean, you will have to clean it regularly.

If your dor never had an issue with its inverted nipples before, it is still got practice to do a visual check once a week to make sure that there isn’t any swelling or discharge.

However, if you know that your dog is prone to mastitis, you should make it a point to clean the inverted nipples.

The easiest way to clean inverted nipples is to wipe them clean with a damp cloth or wet wipes. When using wet wipes, make sure to use wet wipes that are pet friendly. Do not use wipes that have any fragrance or alcohol in them as those compounds can irritate your dog’s skin.

And your dog’s nipples and the surrounding skin are very sensitive.

Expose the inverted nipple by pressing down on the sides and cleaning off whatever dirt or grime is stuck there.

After that, be sure to use a dry cloth and dry the area completely. Residual moisture is conducive to bacterial growth.

Your vet might also give your a cleaning solution to use if your dog’s nipples get easily infected.

Some dog owners have reported the presence of large blackheads growing on the inverted nipple. I would strongly recommend that you bring your dog to the vet to have it extracted than to do it yourself.

By squeezing the blackhead too hard, it can cause pain and discomfort to your dog. Furthermore, the nipple is at a higher risk of getting infected if the blackhead isn’t extracted properly.

You can get the vet to show you how to properly remove the blackheads if it resurfaces in your dog.

Should I Fix My Dog’s Inverted Nipple?

Discovering that your dog has a case of inverted nipples might raise some concerns for many dog owners. But truth be told, it is more a cosmetic issue than a health concern.

Why Does My Dog Have An Odd Number Of Nipples?

Vets can use the number of nipples that the pregnant female dog has to estimate the size of her future litter.

Nipples in dogs are only there to serve one function, which is to produce milk and provide nourishment for hungry puppies.

There isn’t any need to fix or treat inverted nipples in dogs unless it becomes a health concern.

If your dog is prone to mastitis or if the inverted nipple tends to collect a lot of gunk and dirt, make it a point to clean it out regularly to prevent a form of bacterial infection.

Remember that mastitis in dogs can be fatal if some severe cases so it isn’t something that you want to sit on if your dog is suffering from this condition.

Otherwise, just treat your dog’s inverted nipple as part and parcel of your dog’s quirkiness.