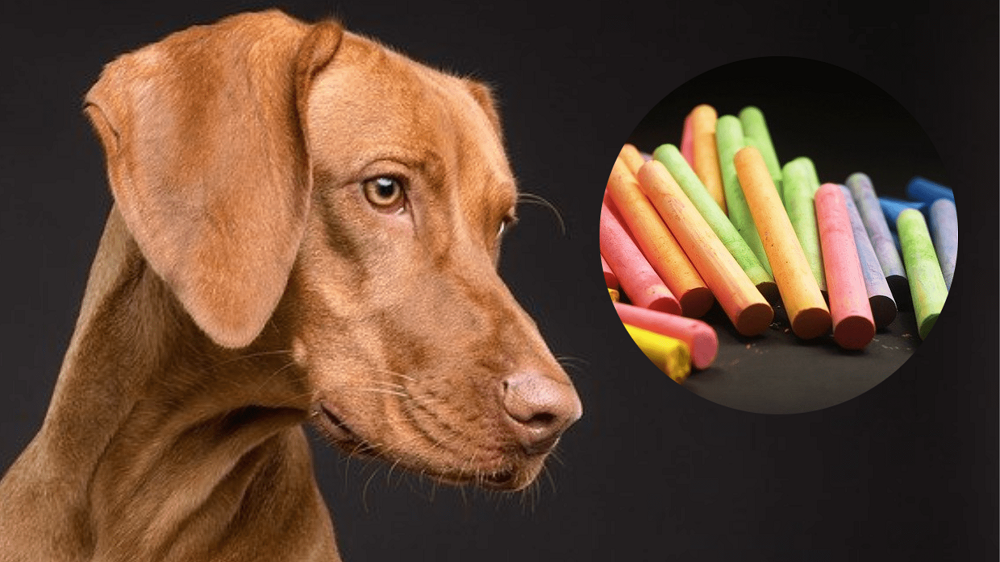 There are times when my dog makes a high pitch whinny pitch that sounds like ‘nails on a chalkboard’. He does it when he wants attention and more often than not when he’s greedy for treats.

But instead of making a sound that resembles ‘nails on a chalkboard’, what if your dog has eaten a few pieces of chalk from the chalkboard in your kid’s playroom?

Is it bad news if your dog eats chalk?

If your dog happens to eat chalk, a small amount of chalk isn’t toxic to dogs. However, if your dog has ingested or inhaled large quantities of chalk, it can cause respiratory issues and also affect a dog’s digestive system. Chalk that contains other toxic materials can also be poisonous to dogs.

Let’s talk a deeper look at what exactly chalk is, how dangerous it can be to dogs and when you should see a vet.

What Exactly Is Chalk?

Chalk is a kind of limestone that is a soft and whitish rock. It is made from the shell of tiny sea creatures like planktons, which takes years upon years to form.

When these tiny sea creatures die, their shells will sink and start to accumulate on the sea bed. Mud will slowly start to cover these shells and a layer of mud and sea shells will start to form.

When this layer of mud and sea shells harden, a chalk deposit is formed. Chalk consists largely of calcite with some other trace minerals like quartz and clay.

The color of chalk can be white or gray

If you have even been into a limestone cave, you will notice these unique and majestic rock formations called stalactites and stalagmites which are made of chalk (calcium carbonate).

Ask most people what items are made of chalk and the most common answer would be blackboard chalk.

Here are some common uses of chalk:

Will Your Dog Be Fine If It Ate Chalk? 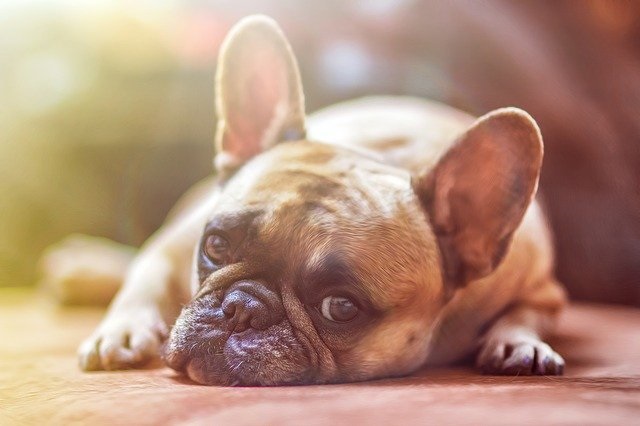 Thankfully, chalk in general is pretty safe for dogs. Even if your dog has gobbled down one piece of blackboard chalk, it can still go about its day fit and strong.

Chalk isn’t something that your dog’s body can digest and will be eliminated via its poo.

If your dog has some sensitivity to chalk, it can experience some stomach upset like diarrhea and vomiting.

It’s the dog’s body trying to purge out the chalk and will resolve itself in a day or two.

The time to be concerned is when your dog has eaten a large amount of chalk. Chalk doesn’t break down well in the dog’s body and can become a hazard.

If it gets stuff in your dog’s upper respiratory tract, it can choke your dog to death. This is very possible in puppies or small-sized dogs.

A large amount of chalk in your dog’s digestive system can also cause an intestinal blockage. When a blockage happens, it can prevent your dog’s food from properly passing through the rest of its intestines.

Every time your dog eats something hard and undigestable like pine cones, the risk of the foreign object getting stuck somewhere in the body is high.

Another serious problem due to the blockage is canine bloating whereby the dog’s stomach can fold onto itself. If left untreated, it can be fatal to the dog.

A dog with a bloated stomach can be seen stretching its neck and looking upwards to relieve the pressure in its stomach.

Here are some other symptoms of intestinal obstruction:

Irritation To Your Dog’s Face

Chalk doesn’t always come in a solid form. There is also chalk dust or chalk powder that can be harmful to dogs.

Imagine putting your face in a bagful of power or flour and taking a deep breath. That is one experience I do not wish upon you in the slightest.

If your dog has inhaled a large about of chalk powder, it can cause a lot of irritation to its eyes, nose and throat.

Your dog will probably end up coughing and wheezing to try and purge out the chalk dust. The best thing to do is to get a wet towel and wipe off as much chalk powder as possible from your dog’s face, eyes and nose.

Why Is My Dog Eating Chalk?

I’m pretty sure as kids, most of us would have attempted to taste chalk at some point. And if you did, we can all agree that it tastes bad and leaves a weird feeling in your mouth.

The same would be for our dogs.

The majority of dogs wouldn’t find chalk appealing and would normally spit it out. If a dog has eaten chalk, it would have done so purely out of curiosity or due to an eating disorder like Pica.

Pica is an eating disorder in dogs that makes them crave and desire non-food items. Dogs with pica can have a thing for one type of object or a wide variety of items.

The dog will normally chew and ingest items like plastic, metal, fabric, goofballs, etc. Pica can also cause some dogs to lick paint. This is a serious disorder and many of these items can be toxic and dangerous to dogs if swallowed.

Diagnosing Pica can be tricky as it can be tied to a number of underlying medical conditions or a nutritional deficiency. Dogs can also be born with this eating disorder as an inherited trait.

The best way to treat Pica is for the vet to find the root cause of the disorder and treat it from there.

What Should I Do If My Dog Ate Chalk? 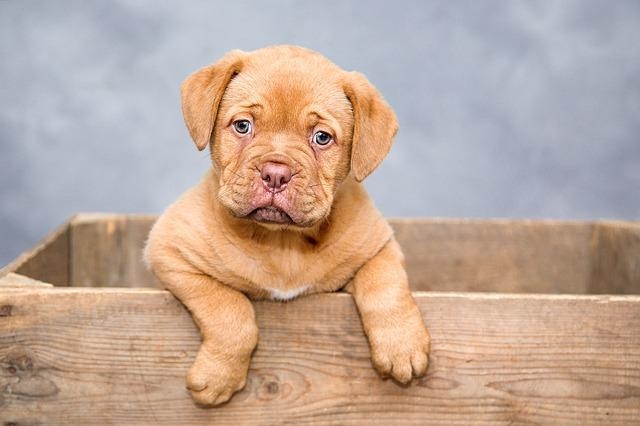 Most of the time, your dog will be fine. The ingested chalk should be able to pass through your dog’s digestive system and get excreted in the poo.

Your plain chalk isn’t toxic to dogs so there will be very little risk of toxication.

I would still advise you to call your vet to let them know about the situation. Chances are, the vet will tell you to monitor your dog closely for any adverse reactions.

If your dog has eaten a large amount of chalk, it would be best to take it to the vet right away for medical attention.

This large amount of chalk can pose a choking and blockage hazard to your dog. Even if they seem fine after the incident, their health can turn for the worse very quickly.

The vet will induce vomiting in the dog to try and get the dog to purge out the chalk. If the blockage is too severe, surgery might be required to remove it.

If you are scratching your head about sidewalk chalk, these chalk pieces are large and thick pieces of chalk.

There are mainly used by kids for drawing on pavements and concrete sidewalks for fun. Some companies even use sidewalk chalk to promote their events.

They are basically made from the same components as your normal blackboard chalk. The only difference is the size.

Dog owners should fret too much if their dogs happen to lick the chalk off the sidewalk or pavement. However, the larger sizes of sidewalk chalk make them a much bigger choking and blockage risk for smaller-sized dogs and puppies.

It is a good idea to bring such dogs to the vet if they have eaten a large piece of sidewalk chalk.

Is Crayola Chalk Toxic To Dogs?

Crayola chalks are similar to sidewalk chalks which makes them more suitable for drawing on driveways and pavements instead of blackboards.

It is made from plaster of paris and has a brought texture than can scratch smooth surfaces.

A small quantity of plaster won’t harm your dog but a large amount can be dangerous. This is because plaster of paris can turn into a paste-like substance when mixed with the liquid in your dog’s stomach.

This can cause a major intestinal obstruction in your dog.

As always, when in doubt or if your dog has eaten many sticks of Crayola chalk, please call or visit your vet right away.

Pool chalk, cue chalk or billard chalk is that small squarish object that you see pool players rubbing against the tip of their cue sticks before they take a shot.

This helps to increase the friction efficiency of the cue which allows the player to ‘grip’ the ball better.

Pool chalk isn’t technically chalk but it is made from crushed silica, corundum (aluminum oxide), and dye.

The most worrying compound that can be toxic to dogs is corundum or aluminum oxide. Aluminum is pretty much in our food and water.

It isn’t toxic from the first sip or bite but it can accumulate in the body over time if your dog is eating or drinking something that contains high aluminum levels.

There are some pool chalk manufacturers that have chalk containing lead. Lead poisoning is possible if your dog ingests the pool chalk by accident.

Foreign metal toxicity can cause many issues with your dog’s health and should not be taken lightly if your dog ate pool chalk.

Is Chalk Safe For Dogs Fur?

If some chalk dust or chalk powder has gotten onto your dog’s fur, it won’t cause much of an issue, even if your dog happens to lick it up.

Not too long ago, there was a trend about dyeing your dog’s or cat’s fur in bright and gaudy colors.

I’m glad that this trend has died off because seeing a green or purple-colored dog walk by is just too painful to watch.

If you are a dog owner and you love and respect your pet, please do not subject it to such public humiliation.

Having an obliging dog doesn’t mean it should look like a rainbow.

How To Prevent My Dog From Eating Chalk?

As a dog owner myself, the most important phrase when it comes to keeping my pets healthy and safe is ‘prevention is better than cure’.

It isn’t a fool-proof plan, but it does make me more aware of the potential dangers and risks that my dog can get into.

If you have a puppy or inquisitive dog, make it a point to keep all chalk-based items in places that your dog can’t get into.

If your kids use chalk for drawing, get them to keep the chalk once they are done using it. For dog owners, that have a pool table at home, make sure to keep the pool chalk once you are done playing.

If you are thinking of eating chalk to see what it tastes like, my friendly advice is don’t. Even for humans, eating chalk isn’t the smartest or healthiest thing to be doing.

Eating large quantities of chalk can cause:

Weirdly enough, there are numerous videos of people actually eating chalk on social media. It could be a trend or a cry for attention. Whatever it is, eating chalk isn’t safe for both humans and pets.

I would think that having a large amount of chalk at home is something not very common for many dog owners.

In fact, I can’t remember the last time I actually came into contact with chalk. The chances of your dog ingesting chalk in dangerous quantities are very rare.

In the event that you do have chalk readily available at home, it would be wise to keep such items away from your dog to prevent any unfortunate incidents from happening.

If your dog has eaten a large amount of chalk, please bring it to the vet right away to prevent any risk of blockage or toxication.