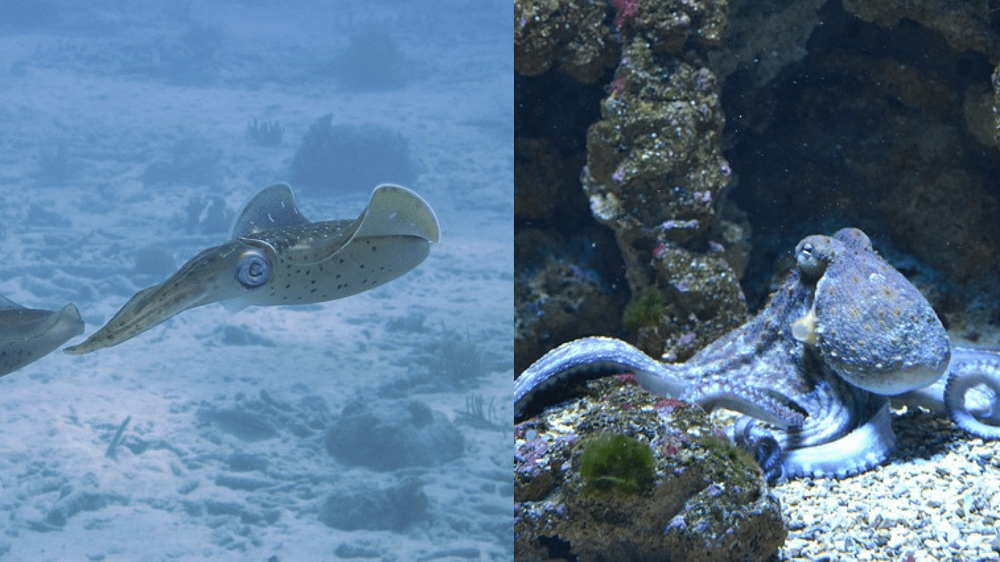 The ocean world is rich in diversity and covers a huge land area on earth. There is said to be up to 1.6 million different species of marine life living and the ocean.

And we have only discovered 240,000 species to date. There is still so much more to learn.

As a leisure diver, I can’t help but feel in awe every time I put my head underwater. It feels like I am watching a giant art piece paint itself with vibrant colors.

One particular marine species that I find especially intriguing is the octopus and squid. As similar as they might seem to be, they have many subtle and blatant differences.

What Species Do The Octopus And Squid Belong To?

The squid and octopus can be considered rather close cousins and they both belong to the Cephalopoda family. These marine mollusks have large heads, long tentacles with suckers and no outer shell for protection.

Differences Between A Squid And Octopus

As similar as these two marine animals can be in terms of appearance and diet, here are the differences between them.

Even though both of them live in the ocean, they live in different parts of the ocean. The squid can be found swimming out in the open ocean looking for food. Some species of squids be also be found living in the deeper and darker depths of the ocean.

Giant squid or affectionately known as ‘The Kraken‘in mythological seafaring tales, are deep water species and can live as deep as 2000 ft.

Octopuses on the other and only found living on the ocean floor amongst corals and rocks or near shorelines. They can squeeze their bodies into the small holes and openings to hide or to ambush.

Where these species usually live also determine the kind of prey that they feed on.

Unfortunately, both squids and octopuses don’t have a very long life expectancy. Squids on average can live up to 5 years and octopuses up to 3 years.

However, the giant squid has been known to live as long as 15 years which is really long for a squid.

Such species only live as long as it is required for them to mature, mate and give birth to offsprings before dying.

Even though squids and octopuses evolved from the same family, they are rather different in physical appearance. Octopuses have a large round head and eight arms which they can use like actual arms.

The squid doesn’t have a round head but a triangular one. It also has eight arms that are accompanied by two long tentacles.

Even though both the octopus and the squid have sucker cups on their tentacles, the sucker rings of the squid are lined with hundreds of small teeth that help latch onto the prey when eating.

A squid’s body is long that has two fins attached to the body which it uses to help move in the water.

Both octopuses and squids can swim by using jet propulsion. They can suck water into their mantle cavity and then forcefully expel it through a narrow cavity, just like how the air flows in a jet engine works.

But the one advantage that the octopus has over the squid is that octopuses tend to move with its arms when required. Octopus tentacles are very flexible and can function like legs to help them walk over rocks and corals.

They can even walk on the sand with their eight arms if they get caught out in the low tide.

Squid species can vary a lot in size. The smallest squid species called the Pygmy squid only grow up to 3/4 inch in length. So tiny.

While on the other end of the spectrum, the giant squid has been documented to grow as large as 43 feet!.

Yikes. Not the kind of squid you wanna bump into while swimming in the ocean.

An Octopus uses the art of stealthiness and speed to ambush and catch its prey. They can hide in rock crevices and or lay very still on the sea bed. It is hard for the prey to notice the octopus as they have a great ability to change their color to blend into their surroundings.

Octopuses love bottom-dwelling crustaceans like crabs, lobsters and clams. Once the prey is trapped by the arms, the octopus will inject paralyzing venom into its prey before enjoying the meal.

Squids don’t really ambush their prey but can swim and catch small fishes and shrimp by shooting out and catching them with their dual feeding tentacles.

The two tentacles have hooks at the end that will latch onto the prey to prevent it from escaping. Once caught, the squid will bite off chunks of its prey with its powerful beak.

Squids are known to be both solitary creatures and they can also live and hunt in packs like the Humboldt squid.

Octopuses are solitary animals and will only get together with another octopus to mate.

Both squids and octopuses have different ways of staying alive in the presence of danger. Squids are very strong and fast swimmers and can propel themselves out of danger in the blink of an eye.

Octopuses will usually use the art of camouflage or squeeze themselves into very small areas where the predator can’t get into.

Both the male and female squids will mate in large groups, meeting head to head and locking onto each other with their jaws. The male squid will then use its tentacles to carry and deposit its sperm into the female thus fertilizing her eggs.

The female squid can close up to 3000 eggs and live them alone to hatch.

Since octopuses lead solitary lives, it can be more challenging for them to find a suitable mate. And the male octopuses have to also worry about being eaten alive by the female octopus during the mating ritual as the females are larger.

The male octopus will also use a long appendage to deposit its sperm into the female. The female octopus can lay up to a staggering 78,000 eggs and will guard them until they hatch.

A mother’s love has no bounds even in the ocean depths.

Squids are known to be less intelligent than octopuses. Although they might display better communicative skills since they live in packs, they can’t problem-solve like the way an octopus can.

Furthermore, they have been many documented stories of octopuses being able to bond with human divers.

These interesting creatures are also highly sought after delicacies in many cultures. The meat of the octopus is less chewy and more tender as compared to the squid.

Octopuses tend to be better grilled and squid is famous for being served as fried calamari.

One thing to note is that pets like your dog or cat should not be given raw squid or octopus as part of their diet. Raw squid for cats can be particularly dangerous as it can mess up their absorption of vitamin B.