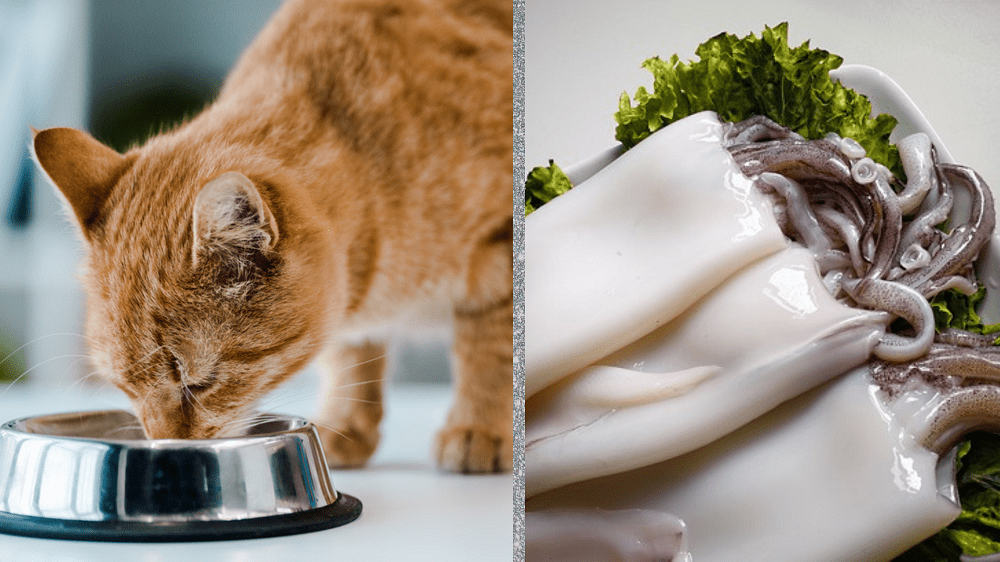 Squid is quite a popular delicacy in many cultures. In the western part of the world, grilled and fried calamari are commonly found in restaurants and bbq cookouts. In eastern culture, people tend to eat it raw or boiled in soup.

However you wish to prepare it, squid is delicious.

What about for cats?

Can cats eat squid whether it is cooked or raw?

There are quite a few points to clarify here.

So let’s get started.

What Can Cats Eat?

First of all, before we talk about squid, we need to be clear about what our cats can and should be eating.

Cats have been around on this planet since 8000 years ago. They were welcomed into many households for their rodent hunting prowess and in return, they were given love and shelter.

For the longest of time, cats have always been obligate carnivores. This means that their main diet comes from meat. In fact, cats can longer taste sweetness as their body has longer have a need for carbohydrates.

The best and most natural diet that you can give a cat is a raw food diet. This diet contains raw meat, raw organs and bones.

Cats get the most nourishment from this diet and it’s easy to prepare.

It is through the evolution of civilization that humans got busier that we found more convenient ways of feeding out cats like dry food.

Dry food or kibbles contain a lot of grain and filler that serve no nutritional value and purpose for cats. In fact, a long term cat’s diet of dry food can cause many health problems like feline diabetes and chronic kidney disease.

If your cat is on dry food, please make the switch to a raw meat diet.

Let’s come back to the topic at hand, raw squid.

Squid is considered a cephalopod, which is a member of the molluscan family. They have elongated bodies, large eyes and tentacles.

There are very intelligent creatures that can change color to camouflage themselves from danger. Another defence mechanism that they have is to squirt out black ink to disorient their predator and make a quick getaway.

Ever heard of squid ink pasta?

On paper, it looks like a good protein source for cats but in reality, it is not.

Cats should not eat or be fed raw squid as part of their diet. For one, seafood isn’t part of a cat’s diet as it is a land-based mammal. Secondly, there is a high risk of thiaminase poisoning and bacteria contamination for cats that eat raw squid.

Can Cats Get Paralyzed From Eating Raw Squid? 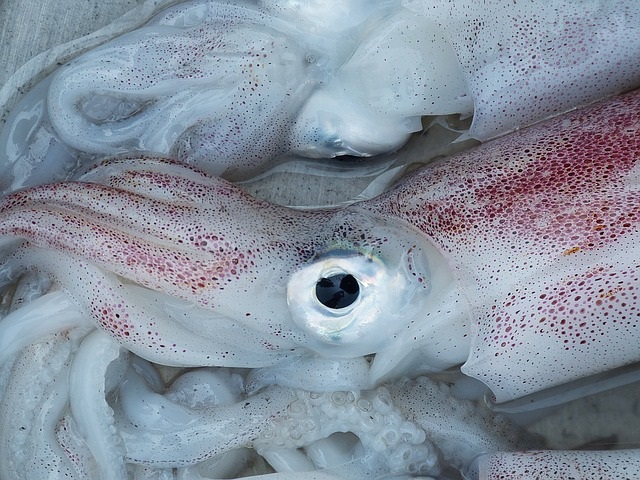 There is a strong possibility due to this medical called condition called thiaminase poisoning. thiamine is also known as vitamin B1 and it is an essential dietary nutrient for maintaining and supporting optimal health for cats.

The most important role for thiamine is for proper nervous system function. It is called essential as cats can’t produce it naturally and need to obtain it from their diet.

It is a known fact that there is an enzyme called thiaminase in seafood or particularly in most fishes, shellfish and crustaceans.

What thiaminase does in these marine lives is to help support their immune system.

But here’s the twist.

When eaten by other predators in the ocean, the thiaminase enzyme rapidly destroys thiamine or vitamin B1 thus leading to a dietary deficiency.

The same thing will happen to cats if they were to eat raw marine life that contains thiaminase.

There are no records of squid containing thiaminase but squids are predators and eat small fishes, shellfish and crustaceans in the ocean.

The thiaminase enzyme can still remain in the squid’s body long after the prey has been digested.

How Can Thiaminase Cause Paralysis In Cats?

Since Thiaminase prevents the cat’s body from properly absorbing vitamin B1 which is required for a healthy nervous system, the cat will suffer from side effects that are neurological in nature.

The nervous system plays a tremendous part in cats’ health and wellness. If cats eat raw squid, they might exhibit the following symptoms due to thiamine deficiency:

The sum it up, the cat will not be able to have normal and conscious control over its movements any longer which can result in paralysis.

How Much Thiamine Does My Cat Need? 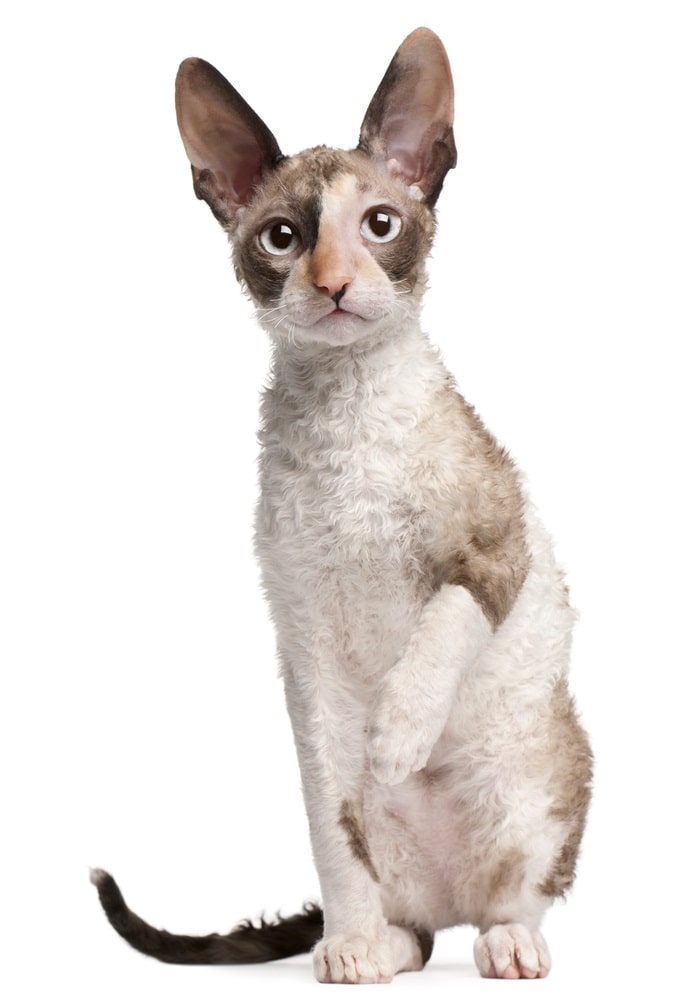 Cats need quite a fair bit of thiamine daily, up to 0.33mg. It is important for your cat to get this recommended dosage daily as it is unable to synthesize vitamin B1.

The best source of thiamine for cats is via raw poultry meat and organs like chicken heart or liver. By feeding your cat a raw meat diet, you can assure that the thiamine in the food is not degraded by heat, additives and preservatives.

Dry and canned cat food regardless of how good quality will not contain the same amount of thiamine as raw food due to the manufacturing process.

If you suspect that your cat has a thiamine deficiency, please bring it to the vet immediately. Your vet might have to prescribe additional vitamin B1 supplements for your cat.

All is not lost if you have a cat that likes to eat squid.

The good thing is that thiaminase is an enzyme and can be destroyed or eliminated by heat. Make sure that you only give your cat boiled squid and make sure it is thoroughly cooked and not blanched.

Thiaminase can’t be gotten rid of by freezing the squid. it can still continue to break down the vitamin B1 levels in the food that are frozen.

Do not feed your cat fried squid as it contains a lot of fat and cats do not take too well to food that is too oily or high in fat.

It can cause vomiting, diarrhea and stomach upset in your cat.

How Much Cooked Squid Can I Give My Cat?

First and foremost, if you really need to give your cat squid, make sure it is only plain and boiled squid. Most cats can eat a couple of small pieces without any problem.

Boiled Squid can be rather chewy and tough in texture so make sure to cut it into very small pieces so that it doesn’t become a choking hazard for your cat.

Don’t let your cat eat the entire squid as that is too much for it. A couple of small pieces as an occasional treat is good enough.

Make Some Squid Broth For Your Cat

If your cat likes the smell and taste of squid, another way you can go about it is by making some squid broth for your cat.

Just boil some properly gutted and washed squid in a pot till it’s well cooked. Don’t serve your cat this broth as it might contain some impurities.

Take out the squid and let it cool down. Give it another quick rinse and boil it for another 10 minutes in a fresh pot of water.

Once the squid broth has cooled, you can add it to your cat’s food or let it drink it as a broth.

Freeze the remaining broth in an ice cube tray. You can pop and melt a few cubes and give them to your cat when necessary.

You can also use homemade tuna broth as an alternative if your cat prefers fish to squid.

The same rule applies when feeding your cat fish. Make sure that it is not raw fish. Cats cannot eat raw fish due to the thiaminase enzyme in it.

Make sure that the fish is properly cooked in water before feeding it to your cat.

No, cats cannot eat raw octopus. An octopus is a close cousin of a squid and they both have the same type of food preference in the ocean.

Any octopus that you plan to give your cat should be properly boiled in water. Raw octopus also has a high probability of containing the thiaminase enzyme.

Furthermore, kittens don’t have the strongest immune system compared to adults cats and any contamination from the squid can be fatal for them.

If for some reason your kitten loves the taste of squid, make sure you only feed them squid broth.

Make sure to feed your kitten a proper diet that helps to support their rapid growth and development instead.

It may seem that your cat likes to eat squid but it is actually the stronger smell of seafood that they desire.

A way to a cat’s stomach is through its nose.

Cats have a very sensitive sense of smell and it helps them decide what to eat.

You can use fish like tuna, sardine and salmon instead of letting your cat eat squid. Make sure to boil the fish meat first before feeding your cat.

Do not feed fish as regular cat food as it contains mercury and can lead to mercury poisoning in your cat if consumed in large quantities over time.

Feeding squid is generally safe for cats as long as it is boiled and properly cooked. Raw squid carries a huge health risk for cats and should be avoided at all costs.

Even though some cat owners might feel there is some nutritional value in squid meat, nothing beats feeding high-quality cat food to your cat.