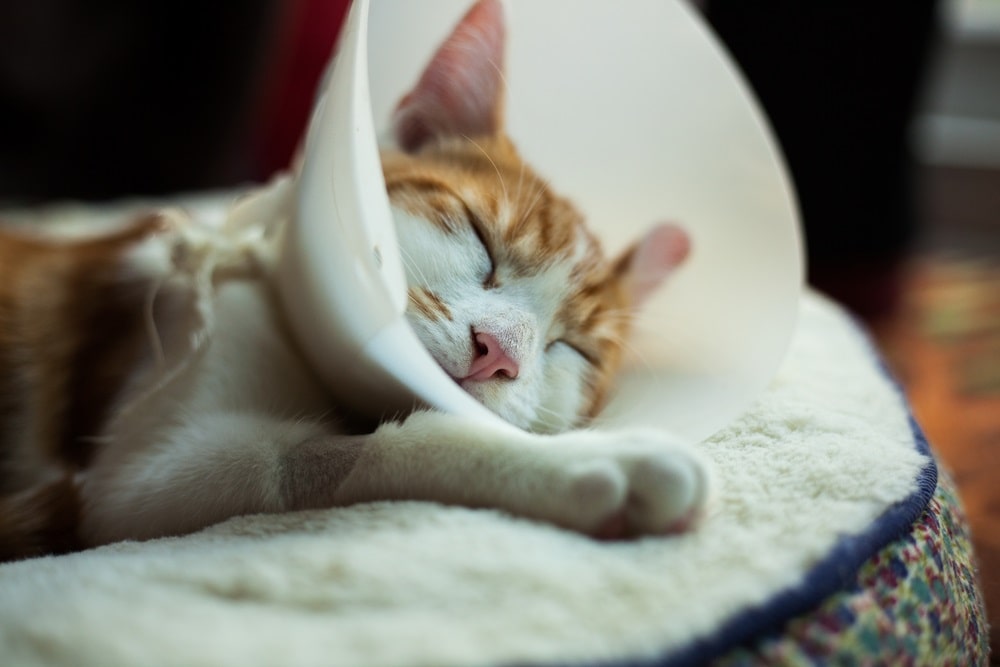 Spaying your female cat can cause you much anxiety as a cat owner. Even though my vet tells me that the process of sterilizing a cat isn’t a complicated procedure, we can’t help but worry for our darling cat’s well being.

Even though the process of spaying a cat can be done within 30 minutes, there are times when your cat might react negatively to the procedure, resulting in some complications.

One rather common side effect is for the cat to develop a lump at the incision area.

A cat spay incision lump can happen when non-painful swelling appears. The suture reaction on the body at the incision site can also cause some swelling. Other complications like a hernia or seroma can cause a lump to appear.

These side effects are common reactions and can be resolved by the vet.

Let us take a closer look at what can cause a lump to appear after spay surgery.

How Is Spaying Done On Female Cats?

Spaying is a surgical operation aimed at removing the ability of female cats to get pregnant. The cat is put under anesthesia and an incision is made in the cat’s abdomen.

The cat’s ovaries and uterus are then removed to prevent reproduction.

Once that is done, the incision is closed up properly with a few layers of sutures.

After the operation, the cat is monitored for a few hours to make sure she’s stable before allowing the cat owner to take her home.

Your cat won’t be in the best of moods after the surgery. Cat owners should be prepared for their cats to eat and move around less for a few days.

Most cats will still be under the effects of the anesthesia for 24 hours and might behave like they are drunk.

If you had your cat for a while before she got spayed, the hormonal change in your cat can have a rather drastic effect on her behavior. You might even notice that your cat’s side are more sunken in compared to before.

All the loud meowing, spraying and wanting to go outside to seek a mate will be gone as the desire to mate is no longer there.

Even though the majority of cats will be fine a few days after surgery, the incision site will still be raw and takes about two weeks to heal.

There might be some side effects and complications to the incision site causing a worrisome lump to appear.

Here are some possible reasons that can cause it to happen.

Infection Of The Surgical Site

Given that the operation requires an incision opening to be made, your cat might have an infection at the open wound. It could be due to the excessive licking of the wound or the wound coming into contact with something unsanitary.

An incision that is taking a long time to heal is at a greater risk of getting infected. Spayed pregnant cats that are late in their term need a bigger incision to accommodate the unborn kittens.

A seroma is a type of fluid called serum that collects under the cat’s skin after the surgical procedure.

This is a fairly common side effect of most surgeries and it occurs at the site of the incision.

Seromas don’t usually form right away so you might only notice them a few days after your cat’s spay surgery.

The good news is that the seroma will tend to shrink and disappear as the wound starts to heal.

But if too much fluid has collected in the incision area, the vet will have to drain the fluid away to prevent an abscess from forming. An abscess can cause an infection that can make your cat sick.

If you notice a small and hard bump or lump at the ends of the incision, it could be due to suture knots.

The stitching process requires a few layers to ensure that the incision area is probably closed up to prevent further bleeding and infection.

The vet will make a few layers of stitching from the bottom up.

What you are seeing on the surface of your cat’s skin is only the first layer. There are a few more layers beneath it to hold everything in place snugly.

The suture knot is buried under the skin to prevent it from coming undone and to keep it away from the cat’s paws or mouth.

You might know of someone who has gotten a hernia before. Surprisingly it also happens in cats.

A hernia happens when an organ or fatty tissue protrudes through a weakened abdominal wall. There are different types of hernia but the one that your cat might have is called an incisional hernia (resulting from an incision).

This results in a lump being formed at the incision area.

As an incision has to be made on the cat’s belly, it might have weakened considerably allowing something else to push through.

In order to resolve a hernia issue, the vet will need to proceed with repair surgery on your cat.

Signs To Look Out For

Upon collecting your cat from the vet after the surgery, the clinic will brief you on post-sterilization surgery care for your cat.

You will also be given pain medication and antibiotics to help your cat with the pain and risk of infection to the wound.

There are a couple of signs that you need to look out for when your cat is back home.

Please do give your vet a call if you do notice any of the above. It could be a sign of an infection or complications that might require further medical attention.

How To Speed Up The Recovery Process? 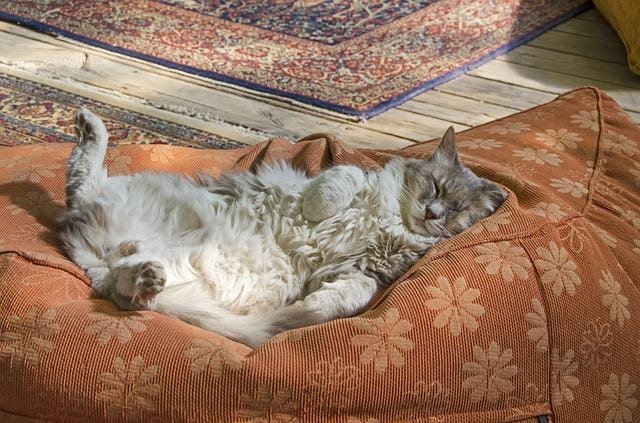 Most cats would take about 2 weeks to recover fully after being neutered or spayed. There are a couple of things that you can do to help with a speedy recovery.

When your cat is home from the vet, isolate your poor cat in a self-sufficient room. Make sure that everything your cat needs to be comfortable is in the room.

Isolating your cat is important as you don’t want it moving and jumping around the house which can cause the sutures to burst.

Furthermore, if you have other cats at home, they might regard this cat as a stranger due to all the strange scents from the vet and be aggressive towards it.

Make sure to isolate your cat for at least a few days after surgery.

Use A Elizebeth Collar

Many cats hate using the Elizabethan collar and it freaks them out. But it is a necessary evil if you want your cat to recover quickly.

The collar will prevent licking of the wound by your cat which it will definitely try to do. This can cause contamination and infection to the open wound which we do not want to happen.

It is only safe to remove the collar once the incision wound has properly healed. This means that your cat will be wearing it for a while.

The most effective collar will be the ones made of plastic. But if that is too rigid for your cat, you can get those made from hard fabric or inflatable ones.

Whip Up your Cat’s Appetite 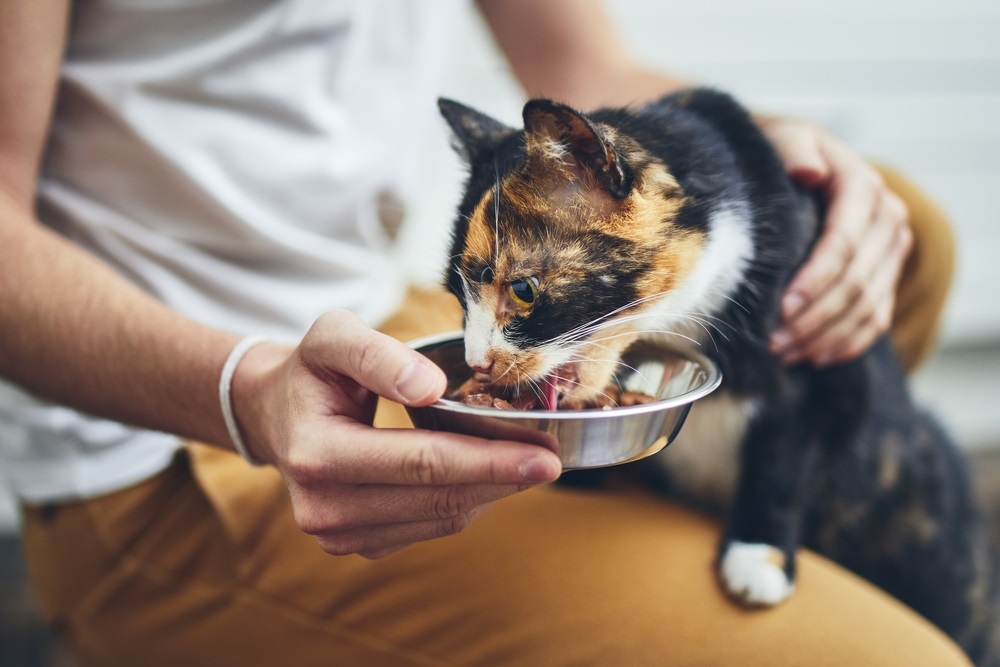 When I brought my cat home after his neutering surgery, his appetite went downhill for the next few days. He also sounded congested from the intubation during the procedure which might have irritated his throat.

That really scared me as cats can’t go too long without food which can result in liver failure.

I started coming up with ways to make his food more palatable.

One method which worked really well was the use of tuna. You can use freshly cooked tuna or canned tuna in water.

Add some cooked tuna meat or homemade tuna water to your cat’s food. Cats taste their food through smell and not many cats can resist the smell of tuna.

What Should A Healing Cat Spay Incision Look Like?

The first few days after the surgery, you can expect the incision wound to still look raw and slightly swollen which is expected.

There might be some bleeding during the first 24 hours but nothing to be concerned about.

Within a week, the wound should start to heal nicely with scar tissue forming. Your cat’s fur will also start to grow back after being shaved for the operation.

By the end of two weeks, your cat should be back to its usual self without any negative effects from the procedure.

As daunting as the surgical procedure might seem, your vet has done it hundreds of times so rest assured that your cat is in good hands.

Spaying your cat will help lower the risk of many life-threatening diseases down the road and prevent unwanted pregnancies. It also helps to prevent your cat from wandering too far to look for a mate when let outside.

Just do be more observant of your cat after the surgery to make sure that there aren’t any complications or infections.