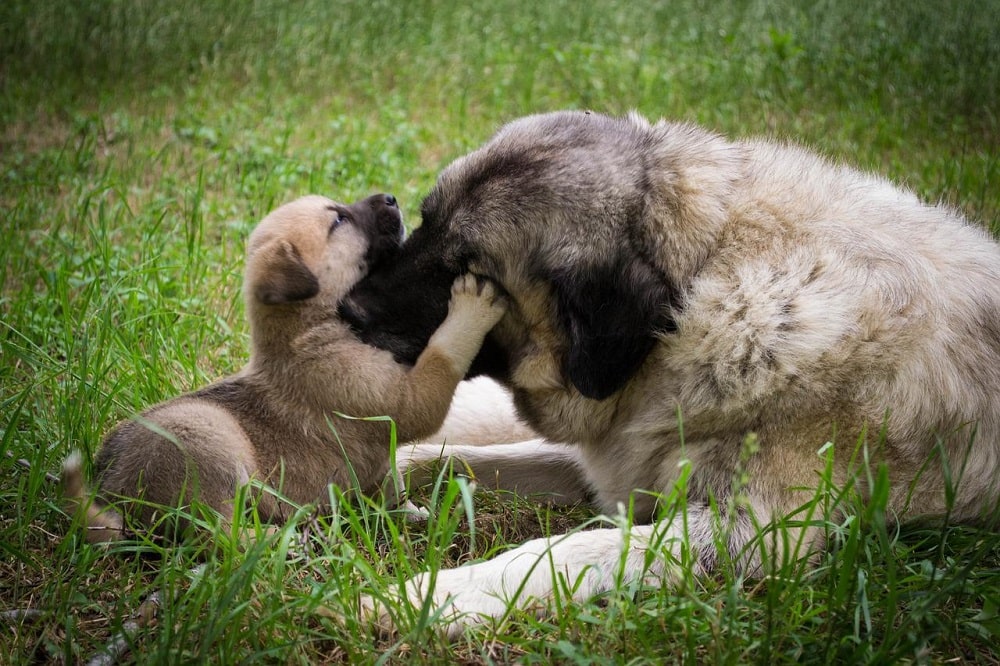 There is a saying which goes “There is no love like mother’s love”. For the most part, a mother’s love is unconditional, nurturing and steadfast.

There is no doubt that a mother dog loves her pups as well. Maybe not in a way that we humans can relate to but she shows it in her own way.

To an untrained eye, a female dog might seem that she is engaging in very rough play with her puppies but there’s good reason to at times.

A mother dog is playing rough with her puppies to teach them about respect, how not to bite with too much force and to be nice to each other. There can also be times when the dam is showing aggressive behavior towards her puppies out of frustration and anger.

If you have a nursing female dog or a dog that is about to go into labor, it is important to understand when to let the mother dog be rough with her pups and when to separate them.

Why Are Mother Dogs Rough With Their Pups At Times?

A mother dog’s love for her pups isn’t always going to be gentle. There are times when she needs to step in and do her job as a disciplinarian.

Puppies Get Too Rough

Puppies are small, cute, devious and full of energy. If you are a mother yourself, you’ll understand how crazy kids can be as they get older.

Not much difference when it comes to puppies.

Some puppies can get out of hand and start biting and being too rough with the other puppies or the dam herself.

The dam has to make sure that this renegade pup is put in its place before things get out of hand.

Another thing about puppies and kittens is that they are very mouthy. Once their cute little teeth start to grow, they tend to bite and bite too hard.

Once again mother dog has to step in and let her pups know that forceful biting is not to be tolerated on her watch.

This is actually a good thing for dogs as they get older.

Dogs that aren’t disciplined by their others when biting too hard can carry this bad habit into their adult years. This can be a problem when they do not realize how powerful their bites are and accidentally injure a family member.

Time To Stop Depending On Mother Dog

There comes a time in the puppy’s life when it is no longer a helpful creature. This usually happens when the pups are about three to four weeks old.

The mother dog will start to wean her litter off her milk so that she can get back to living her normal life.

By week five or six, puppies are expected to be self-reliant and be on solid or canned food. However, there will be some pups who will still insist on suckling on mommy’s milk.

The dam will have no choice but to get rough with these pups to let them know that her milk factory is no longer in production.

Do Mama Dogs Get Annoyed With Their Puppies? 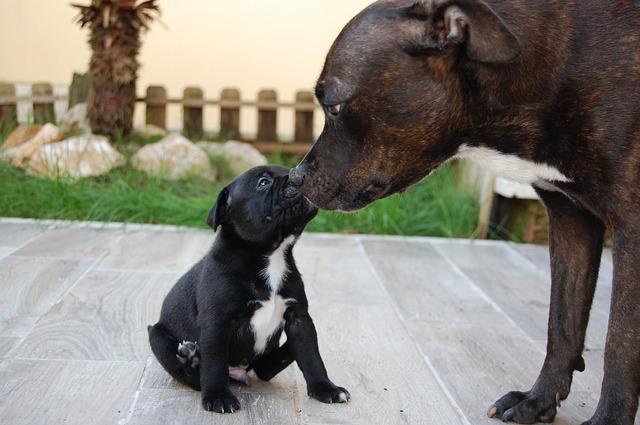 Ask your mother if you were ever a pain in the butt as a kid and you won’t like the answer.

Plot twist: I’m still considered an annoyance to my mother even as an adult.

As mentioned above, it is normal for a dam to get irritated or annoyed by her pups and discipline them.

Raising a litter of puppies is hard work round the clock and can place a lot of stress on the mother dog. What we don’t want to see is the mother dog being aggressive or hostile towards her litter due to health or problems out of the norm.

Here are some factors that can cause a dam to exhibit aggressive behavior towards her litter.

A female dog that has just given birth can suffer from a bacterial infection of her uterus lining. This can happen one day or one week after giving birth.

Dogs with this condition can suffer from a high fever and have vaginal discharge. It isn’t a small issue and can turn into a life-threatening condition if left untreated.

The puppies will suffer too as the dam won’t be able to produce enough milk and will start neglecting her litter.

Some mother dogs can even turn aggressive towards their puppies due to the discomfort and pain that she is experiencing.

Mastitis is a condition whereby the nipple of the dog gets infected due to the presence of bacteria.

Mastitis usually occurs after the dog has given birth and is all ready to feed her hungry puppies. It can also happen when the puppies get too rough while sucking on the mother’s tits. This causes trauma to the nipple and allows bacteria to enter.

A dog with an inverted nipple is more prone to mastitis as dirt and gunk can accumulate under the skin.

It is easy to recognize when your dog is suffering from mastitis. The mammary gland will look red, swollen and inflamed

The last thing that the mother dog wants is her puppies latching onto her infected nipple/s. It is painful and can cause her to snap or bite the hungry puppy.

Not one ever said being a mother was an easy job.

Some mother dogs can be so overwhelmed by their puppies that she starts being hostile to them. This is quite common behavior with female dogs looking after their first litter ever. She might even start moving her newborn puppies around as she’s not too sure what to do with them.

Most breeders will closely watch a first-time mother closely to make sure that she isn’t harming or neglecting her liter due to stress. 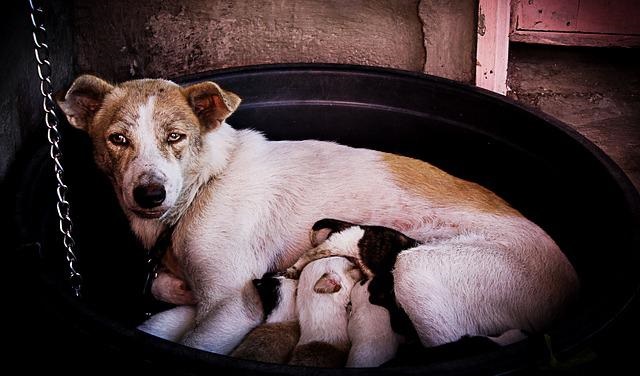 When puppies are first born, they are totally dependent on their mother. The dam and her puppies will recognize each other through smell.

It is best to not touch or remove the puppies from the mother for too long. It can cause the mother dog to not recognize the puppy and be too rough towards it.

The only reason you should be handling a puppy is if it’s sick, injured or neglected.

Survival Of The Fittest

In every litter, there might be one puppy who is deemed the weakest. We call it the runt of the litter.

It is the natural instinct of the mother dog to identify this puppy and give it as little attention as possible. This allows the other healthier puppies to have more milk instead.

The mother dog can resort to aggressive behavior or even kill the poor puppy to stop it from feeding.

As cruel as it might seem, this is how nature works to keep the species thriving.

How To Prevent The Dam From Harming Her Puppies

When it comes to looking after the puppies, it isn’t just a full-time job for the mother dog. The dog owner should always keep a close watch on the litter during the first 3-4 weeks.

This should be the case even if the dog is having her second litter.

If you notice the female dog being unusually hostile towards her pups. Give her a physical check to see if is caused by a health problem like mastitis.

Let the vet know beforehand that you are bringing in a lactating dog. The vet may or may not request that you bring along the puppies as well to keep them together.

Bacterial infections like mastitis and metritis can be easily cured if treated early.

If you notice the that mother dog is being aggressive towards one or two of her puppies, it would be best to remove them from the litter.

They might be sick so have them checked at the vet just to be sure.

If the puppies are fine, it could be that the dam is rejecting them and not allowing them to feed on her milk In this case, you will have to bottle feed these puppies until it is time to wean them off milk and onto solid food.

Why Does My Dog Bite Her Puppies’ Neck?

Don’t be too alarmed if you see your dog biting her puppy’s neck. Many dogs do this as a form of play. It can also be used as a form of discipline when the puppy is being too naughty.

The mother dog knows how to control the strength of the bite and won’t harm the puppy.

At times when you notice that the puppy is in genuine pain and there’s blood, make sure to stop the female dog and remove the pup from her care. There is a high chance that she might try to attack it when you return the puppy to the litter.

Mothers know best (well, not always), especially when caring for their young. Trust that your female dog is doing a good job in raising her litter.

Puppies can be mischievous drama queens that need to be disciplined from time to time.

As much as your trust your dog’s natural instinct, be sure to step in and put a stop to any action that is too aggressive towards the puppy.