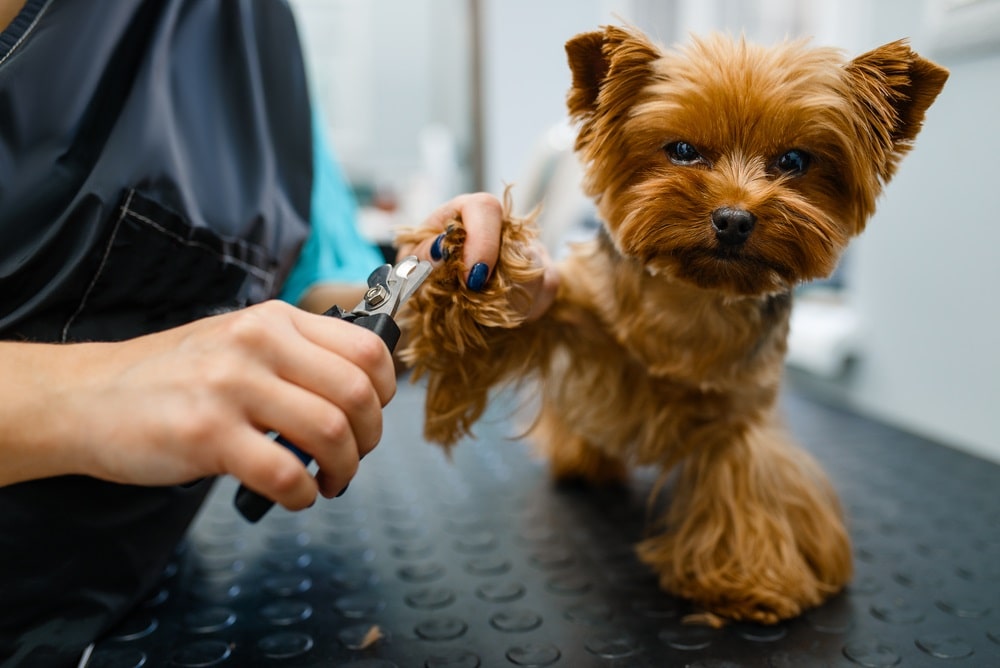 So you dropped off your dog at the groomer expecting it to look as good as new after a few hours. When it was time to collect your dog, you noticed that something isn’t right about the way it walked. Upon closer inspection, your dog seems to be limping.

Why Is your dog limping after the grooming session?

Your dog is limping after grooming because it is injured. An injury to your dog’s paw or in more serious cases, spine, can cause your dog to limp. A simple strain or sprain can recover quickly but if there is an injury to the dog’s spinal cord, medical attention is needed immediately. However, don’t just assume it was the groomer’s fault without further investigation.

We need to understand how your dog can end up limping after coming back from the groomers. And more importantly what steps we can take to prevent this from happening again.

Your Dog Jumped From The Grooming Table

There are some grooming tables that are raised up pretty high. This allows the groomer to have better access to the dog’s paws and underbelly while grooming.

If you have a dog that can’t really sit still or is afraid when at the groomers, it will try to avoid being groomed at all costs.

Your dog might have jumped off the table and landed wrongly which resulted in a sprain. Small and senior dogs are more prone to getting injured jumping from an elevated platform.

Some groomers make it a point to put some dogs on a short leash to prevent them from moving around too much during the groom.

Keeping your dog’s overgrown nails trimmed is something that all groomers will do. This is important to allow your dog to walk and run properly.

Unlike cats, dogs don’t fancy scratching a scratch post to trim their nails. Dogs that are more active in nature tend to have better self-maintained nails from all the running about.

The thing about most dogs is that they don’t like having their nails trimmed and can be drama queens about it.

The process of trimming a dog’s nails is a painless one. It just looks that one as some dogs don’t like having their paws touched or have had a bad experience before.

Most groomers are experienced enough to know how much nail to trim without affecting the quick which contains blood vessels and nerve endings.

Some dogs might struggle too much when getting their nails trimmed causing the groomer to accidentally cut into the quick.

It can be painful for your dog and cause it to limp if it happens to a few of its nails.

You might not notice it but hair actually grows in between your dog’s paws. Long-haired dogs are more prone to having furry paws as compared to short-haired dogs.

That being said, my neighbor’s dog who is a short-haired mongrel looks like he has a rainforest ecosystem growing under his paws.

It is better to have the groomer trim the hair in between your dog’s paws to keep things neat and tidy.

Hair that is too long can make it slippery for your dog and tend to trap dirt and mud.

If your dog hates having his paws touched or shaved, the groomer could have accidentally nicked the delicate skin between the paw pads or the paw pads themselves.

Your dog could be limping because it hurt to put its full weight on the paw pads.

I hope this doesn’t happen to any of you dog owners out there but it is possible that your dog got groomed by someone who was too rough or abusive towards your dog.

This reason affects me the most because when I entrust my dog to my regular groomer, I do expect them to treat my dog with love and respect.

I understand that groomers have a business to run but our dogs are not some commodity that you can roughly handle just because you need to hit your quota.

Not all groomers are gentle with the dogs.

Some will roughly yank their paws or legs in order to trim the claws or paw pads. They can also hold the dog’s paw at a weird angle that causes pain to the dog.

All this can lead to injuries to the dog’s legs.

If you have evidence of the groomer being rough to your dog, confront them and let the store owner know. Don’t bring your dog back ever again.

In the case of abuse, make sure to make a report to the police or your local SPCA. We must never let animal abusers get away with their horrible deeds.

Should I Take My Dog To The Vet For Limping? 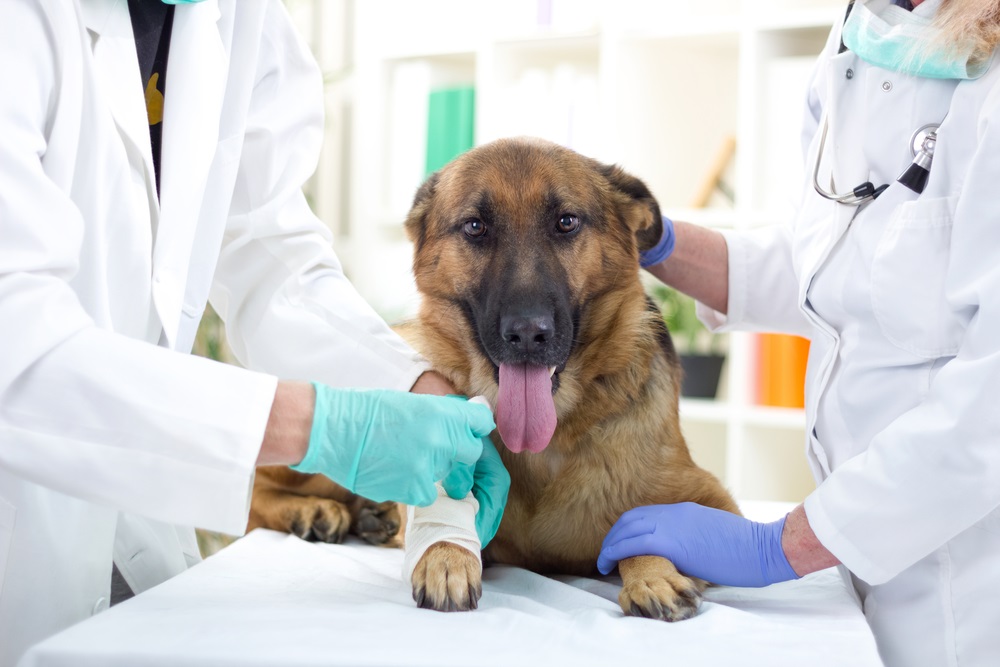 Not all limping cases warrant a visit to the vet but you should at the very least, inform your vet and let them decide your dog’s condition warrants a vet visit. There are some dogs that can limp for a few days after getting an injection due to soreness and swelling at the injection site.

The first thing that you should do when you notice that your dog has a limp after visiting the groomer is to check to see how serious it is.

Is any of your dog’s paws or limbs dangling or at a weird angle? This could mean that it is dislocated or broken.

Is your dog able to put weight on the paw or is it totally off the ground?

Also, check for any swelling, bleeding and if the affected limb is painful to the touch.

Let your vet know about your dog’s situation. If the vet feels that the injury isn’t serious, you can try to apply a heat and ice pack to try and bring the swelling down.

In the event of a broken or dislocated limb, you will have to bring your dog in right away for emergency treatment.

Inform the groomers to let them know that your dog came back with a limp after its grooming sessions.

A responsible grooming business will review the CCTV to see what went wrong and make sure that the injury wasn’t due to rough handling or animal abuse.

How Can I Treat My Dogs Limping At Home?

If you are sure that your dog’s limp isn’t due to a fracture or dislocation, there are a few things that you can do at home to make your dog feel more comfortable.

If your dog has stepped on something sharp and it is lodged in between your dog’s paws, gently move it to see if it can be easily removed. Once removed, soak your dog’s paw in some Epson salts and apply an antiseptic cream to the wound.

If the groomer has accidentally cut too much of your dog’s nail or has nicked your dog’s paw pad, there might be some bleeding.

Apply some pressure to the affected paw to stop the bleeding and apply a bandage and antiseptic cream to the wound if necessary.

If the affected paw or leg has some swelling, apply an ice pack to that area a few times a day for about 10-15 minutes.

That should help to bring down the swelling.

The fastest way to recover from a limp is for your dog to rest and not move the affected limb. This means no playing or taking your dog out for walks until it has fully recovered.

How Long Does A Dog Limp Take To Heal?

If the injury isn’t serious, most limps should take a couple of days to get better. You should start to see improvements in your dog’s mobility after 24-48 hours.

You should take your dog to see a vet if there isn’t any improvement after a day or two.

Can Dogs Be Sore After Grooming?

It isn’t uncommon for some dogs to feel sore after a long grooming session. This can happen more so for dogs with matted hair where the groomer has to shave or cut very close to the dog’s skin.

This can cause some degree of razor burn to the dog’s sensitive skin, especially around the butt, face and genital area but will normally be ok after a few days.

If your dog isn’t behaving like its usual self after being groomed, look out for cuts and scabs on your dog’s skin which can cause some discomfort.

Going to the groomers for a grooming session is part and parcel of a dog’s life. The majority of groomers are professionals who know how to handle our dogs well.

In the event that you find your dog limping after being groomed, get your dog checked by the vet and let the groomer know so that you can find out what went wrong. 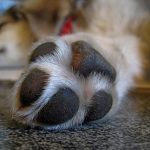 Dogs With Pink Paw Pads (Is This Normal Or Not?) 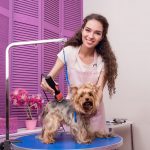 Dog Shaking After Grooming (Why Is This Happening?) 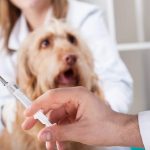 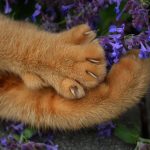 Why Can’t My Cat Retract Its Claws?