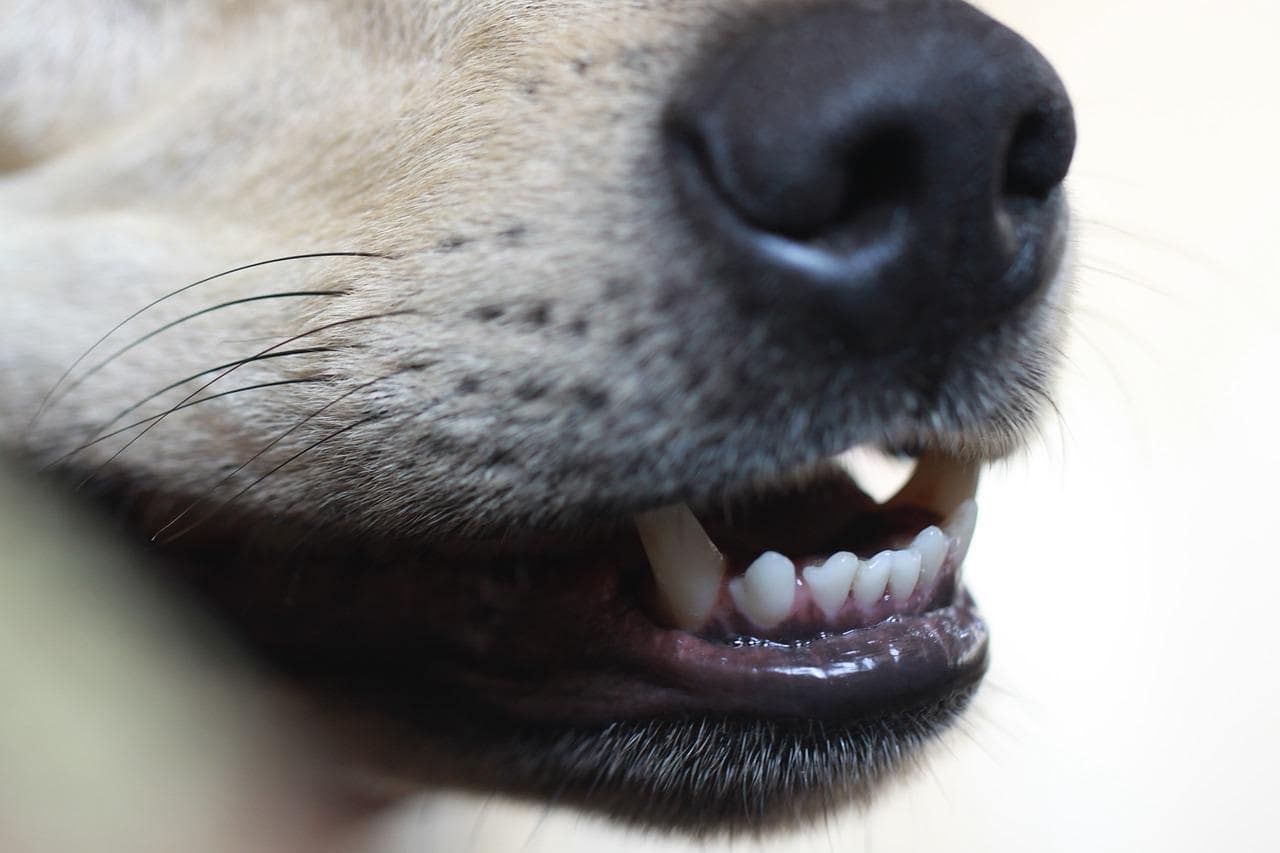 Seeing your puppy get sick is one of the worst things that a dog parent can experience. This is why it might break your heart to see your pup go through its teething stages. But do dogs vomit when teething? And if so, should you be concerned?

For the most part, the teething process is harmless and even essential for the pup. However, some of the symptoms need to be carefully watched, so that you may take care of your puppy properly. This article should help soothe your concerned heart.

When Do Puppies Start Teething?

Puppy teething begins somewhere at the age of two weeks old when the first baby teeth begin to appear. The symptoms of teething tend to be worse when they reach 3-4 months old, as that’s when they usually begin to lose their teeth.

What Are the Symptoms of a Puppy Teething?

Usually, you can easily tell when your puppy begins to get rid of their baby teeth. Here are some common puppy teething symptoms you may want to look out for.

The blood on the teething puppy’s chew toys may be there for two reasons: their gums were bleeding and the blood travelled to the toys, or their teeth fell out while they were chewing. Regardless, seeing small spots of blood is nothing uncommon.

Your dog’s breath might even start to smell like metal due to the bleeding in the mouth.

Teething puppies may have bleeding red or swollen gums, which is absolutely normal. At this point, they are getting rid of their baby teeth and making place for new adult teeth to grow.

This can last for months and is one of the most frequent puppy teething symptoms, so you should not feel concerned.

Obviously, when your puppy starts teething, one of the most common symptoms is seeing visible gaps in their mouth, where their teeth should have been.

You may find a tooth in their favorite chew toys, as they most likely left it there after a heavy chewing session. 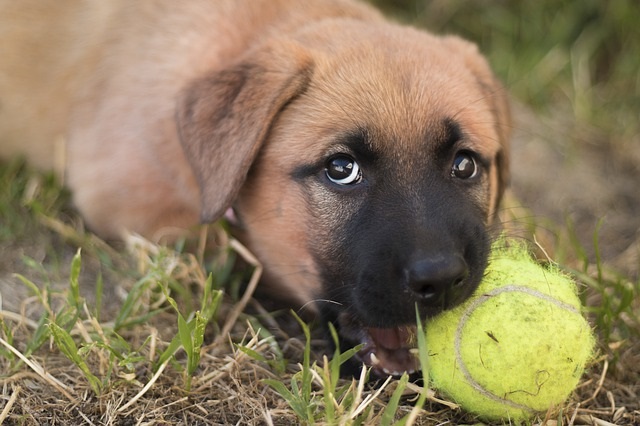 Sure, young dogs chew a lot naturally. After all, they need to give their baby teeth a workout. However, if you see your new puppy suddenly chewing everything with much more interest than before, then it may be a sign that your puppy is teething.

Puppies can be a nightmare when they start biting everything and everyone. For puppies, chewing feels like a self-soothing action and by instinct, they know that if they chew, the “pain” will “fall off” and go away.

You might want to often give them chewable dog toys and chewable chunks of food. Otherwise, they will just start chewing on other items like your very expensive shoes.

Some puppies may have a slight fever when they go through teething, as the swollen gums will deliver inflammation throughout their bodies.

This can easily make puppies sick. You may want to keep an eye on the young puppy if they develop a fever, and if it gets too high, then you should immediately bring them to the vet.

Your puppy may be chewing on everything, but that does not mean they will feel comfortable during it. In fact, the teething pain might make it difficult for them to eat altogether.

If their mouth hurts when they begin to eat, they will eat very slowly. Sometimes, they may not even eat at all.

Newborn puppies tend to whine a lot, especially when they are young and are still trying to figure out how the world works.

That being said, if they were quiet for a while and now they seem to be whining again, it may be because they are teething.

When puppies lose their teeth, they feel the same type of pain that human babies feel when losing their teeth.

Just think about how you were whining when you had a tooth pulled out. Puppies who are teething will likely be going through the same pain.

Puppy chewing may trigger the same reaction, as your teething puppy may be slobbering all over their toys.

What Causes a Puppy to Throw Up During Teething? 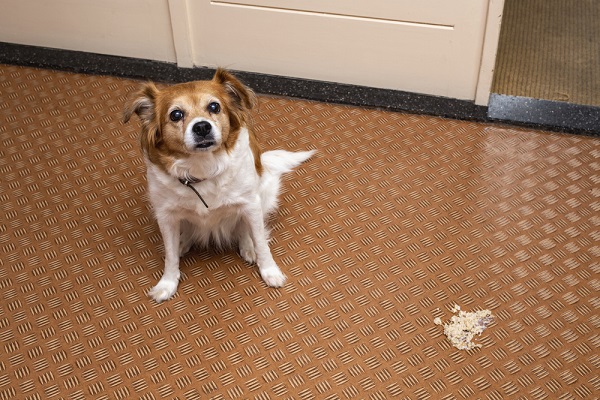 Puppies cannot really eat properly during the teething stage, which can cause them to develop some digestive system issues. As they change to their permanent teeth, the swollen gums may lead to inflammation and fever, possibly even infection.

This can travel down to the stomach and make them feel ill. Aside from that, they may also swallow their own blood. Moreover, since they eat mostly soft foods and lots of frozen treats, it can lead to soft stools.

How Common Is Vomiting when Puppies Are Teething?

While some puppies develop digestive issues when the teething pain starts, vomiting is not actually that common.

Teething puppies will chew on everything they come across to soothe their deciduous teeth pain. So, the puppy vomit is most likely caused by something that they ingested.

This is why it is important to have your home puppy-proofed. This way, they won’t be tempted to soothe the pain in their gums by chewing on some random objects from the house.

How to Help Your Teething Puppy

Most puppies go through their teething stage without any complications but like any concerned parent, you want to make things easier for your baby pup. Here are some feeding tips you can try out:

For the most part, you should make sure they chew on soft plastic toys, cold treats and teething sticks. Avoid giving them plush toys during this time.

How Long Does Puppy Teething Last?

The duration of the puppy teething is different, depending on the breed of the dog. On average, puppy teeth should be replaced by adult teeth by the time they reach 6-8 months of age.

Still, teething can last for a longer time in some breeds. As the puppy’s teeth won’t fall out that easily, you may have to get the help of your vet. Brachycephalic breeds, like the bulldogs with flat faces, have milk teeth that are more resistant to falling.

Some people say that puppies frequently poop unusual stools that can be fairly watery. That being said, diarrhea, just like vomiting, is not a common symptom of teething unless your pup actually eats something bad.

The loose stool is probably because they are drinking lots of liquids, chewing on lots of toys and eating soft foods to avoid the pain. It should not last long, and the stools will start looking better once the replacements erupt.

Teething dogs generally don’t vomit, but you can expect a series of other symptoms instead. Sometimes, one of the actual symptoms may indirectly cause their vomiting like when their excessive chewing causes them to eat something that they shouldn’t. When their teething hits, you should keep an eye on the symptoms that your dog has.