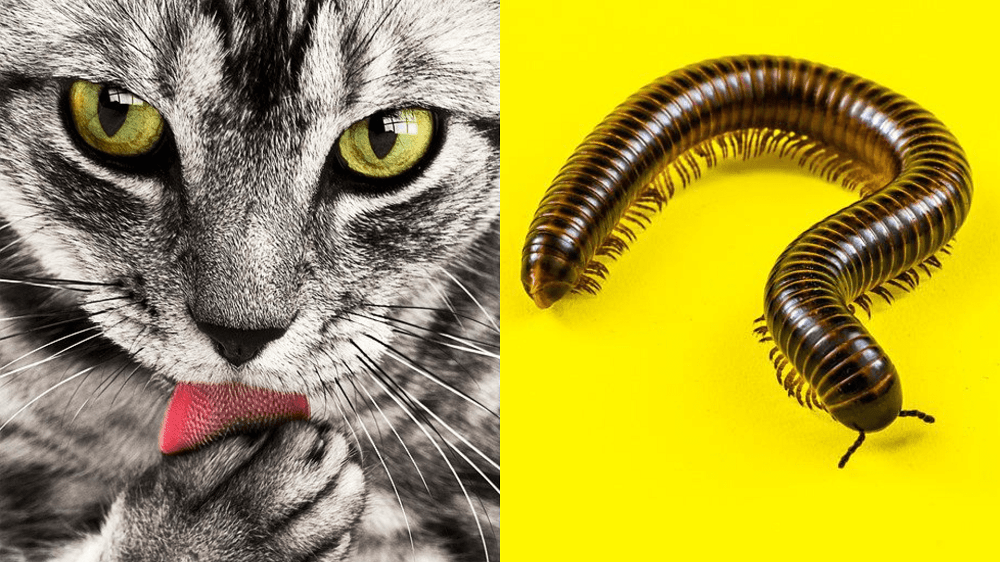 A millipede, centipede and earthworm crawled into a bar.

The bartender took a look at them and said “So who’s the oldest sibling?”

I know, it is a rather weak attempt at a bad joke but there’s some truth in the above. It can be hard to distinguish the three from a distance with an untrained eye.

Millipedes are a common sight in our gardens and you can even find them crawling indoors from time to time.

Cat owners will probably notice their cats trying to paw and play with the fearful millipede.

A concerned cat parent will probably have these questions in mind.

Are millipedes poisonous to cats?

Can my cat eat millipedes?

What’s the difference between a centipede and a millipede?

We will answer these questions and more.

What Is A Millipede?

Millipedes are worm-like creatures that belong to the family of arthropods. This means that they have two pairs of legs on each body segment.

Millipedes are long and cylindrical in shape and can have more than twenty body segments. The largest millipede species is the giant African millipede which can grow up to 11 inches.

More than 12,000 species of millipedes have been identified in the wild so far.

That is a mind-boggling number.

These creatures feed on decaying plant matter and are a welcomed sight for gardeners as they help to keep the soil healthy.

Some larger species of millipedes are even kept as pets.

Are Millipedes Poisonous To Cats?

Millipedes are slow-moving and lack a sting or bite. Because of this, there are often on the menu of many predators like frogs, birds, critters and even cats.

On the surface, millipedes might seem helpful but they have a few defensive strategies that can help them survive an attack.

The first defence mechanism is the signature move of the millipede which is to curl up into a tight bowl.

This position helps to protect their delicate legs and soft underbelly with their outer exoskeleton.

Millipedes are not poisonous to cats most of the time. However, millipedes can secrete defensive fluids that contain phenols, hydrochloric acid, hydrogen cyanide and benzoquinones. Thes chemical compounds can cause irritation and chemical burn to your cat’s eyes, mouth and nose when they try to eat a millipede.

Millipedes are not dangerous to humans as we don’t attempt to make a snack out of them. But their secretions can cause skin discoloration or an allergic reaction if we are not careful.

What Should I Do If My Cat Ate A Millipede?

If you have an overly playful kitty that likes to catch wriggly arthropods it might try to eat the millipede.

It is a relief to know that although millipedes don’t bite cats and are not poisonous to our kitties, their defensive fluids can cause discomfort to the cat.

The first thing that you would want to do is wipe off any defensive fluid that might have gotten on your cat’s face.

Use a wet wipe, soak it in warm water and wipe your cat’s face and mouth. Do this a few times and change the wet wipe each time to not get more of the irritating fluid on your cat.

Some larger millipedes can spray their defensive fluid as far as 32 inches. If you find your cat rolling on the ground or excessively licking itself with a millipede nearby, make sure to wash the chemical fluid spray off its body.

Even though this spray isn’t fatal to cats, it can cause bad allergic reactions and an upset stomach if ingested.

The chemical fluid spray contains phenol which is a compound that can be very toxic to cats and dogs.

Cats don’t have the ability to break down this compound in their bodies which can lead to liver damage.

Phenols can also be found in essential oils which makes them very toxic to cats.

It would be best to bring your cat to the vet for a precautionary check and further treatment if necessary.

Better to be safe than sorry.

There have been many times when I have mistaken a millipede for a centipede. In the dark, they do tend to look similar but in reality, they are very different.

In some ways, think of the centipede as the distant cousin of the millipede. A centipede is also part of the arthropod group of species.

Centipedes have only one pair of legs per body segment as compared to two like the millipedes. The largest centipedes can grow up to 8-12 inches long like the giant red-headed centipede. The small ones are only up to a few inches.

One obvious way of recognizing a centipede from a millipede is the antenna and mandibles located at the front of the centipede’s head.

Centipedes are carnivores and are known to prey on birds and even small animals.

They are venomous and are known to be aggressive and ferocious. Their venom packs a punch and there have been reported cases of human fatalities from centipede bites.

Some cat owners might mistake a dark colored caterpillar for a millipede. They might seem harmless but there are some species of caterpillars that are toxic and dangerous to cats if eaten.

Are Centipedes Poisonous To Cats? 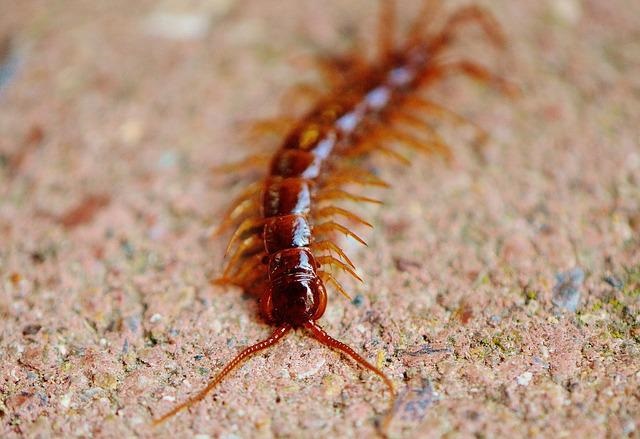 In general, centipedes are poisonous to cats. It also depends on the size of the centipedes. The bite from a small centipede won’t be as serious as a large centipede. Large centipedes have venom that is more toxic and can inject larger amounts into their target.

The bite of a centipede contains chemical compounds that can cause severe pain, difficulty in breathing, neurotoxicity and even paralysis.

The main aim of the toxins is to immobilize the prey for the centipedes to feed on. Centipedes are poisonous to cats and should be avoided at all costs.

Do note that mosquitoes might seem harmless but their bites can cause harm to our cats. If you live in an area that has many of this blood-sucking parasite, please do what you can to keep mosquitoes away from your cat.

What Should I Do If My Cat Ate A Centipede?

If you noticed that your cat has eaten a centipede or even worse, bitten by a centipede, please bring it to the vet immediately.

Depending on the size of the centipede in relation to the size of your cat, there could be enough venom in your cat’s body to be fatal.

Even if the bite isn’t fatal, it will be causing a lot of pain and discomfort to your cat. Your cat might be vomiting and experiencing a fever from the bite.

Eating a small centipede might not do much harm to your cat since the stomach acid can neutralize the toxicity of the venom. But it might not taste very good to your cat.

Why Do Cats Eat Bugs?

Most cats don’t go about eating bugs. Can’t are pure carnivores and not insectivores. This means they get their protein from other animals and not insects or fishes.

That being said, I have seen my cat effortlessly swat a moth or flying ants in the air and straight into its mouth.

Cats prefer to hunt, chase and kill bugs due to their strong predatory instinct. It is hard for cats to resist fluttering and wriggly creatures.

Even though your chonky and lovable cat sleep all day, it can turn into a ferocious hunter in an instant.

It is a known fact that many feral and stray cats hunt and kill small critters not for food but for fun.

This has caused some species to go extinct or dwindle down in population.

Many cats enjoy hunting bugs but not many understand the risk involved. There are some creepy crawlies that can cause harm to our cats when eaten.

Just to be safe, keep your cats away from bugs and try to stop them when you see your cat trying to hunt one.

As harmless as millipedes can be, it still can get dangerous if your cat tries to bite or eat one. Cats have a sensitive nervous system and there is no telling how badly it can react to the defensive fluid.

Centipedes are outright dangerous to cats and should be avoided as the bite contains venom.

The safest thing to do is to get your cat to the vet for examination if it has eaten or has been bitten by bugs that are known to be venomous.