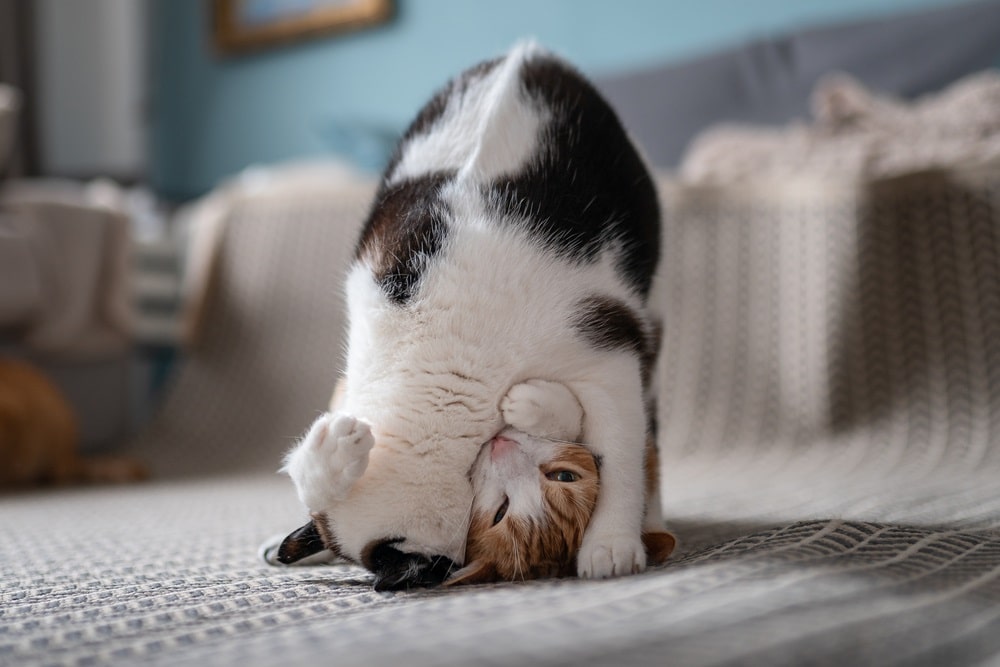 Cats are known for their rather eccentric behavior at times that can leave many cat owners scratching their heads.

They can run sideways, kick like a bunny, puff up their tails like a feather duster and even walk on their hind legs.

If you have more than one cat at home, you might even notice one cat biting your other cat’s neck. It seems that they are playing and fighting at the same time.

Cats bite the neck of other cats when they are engaged in playtime. It is also a form of courtship when cat mate. Sometimes it just boils down to poor socialization skills by a cat.

In this article, we will be covering these reasons in more to understand this neck biting behavior and what you should be doing about it.

The copulation process amongst cats has always been known to be noisy and brief. At times, it’s hard to even tell if the cats are mating or fighting.

This is because copulation can be painful for female cats who will attempt to take a swipe at the face of male cats.

Once the male cat has inseminated her, he will let go of the female cat’s neck and make a run for it.

So don’t be too surprised to see your two neutered male cats having a go at each other.

Cats are wonderfully playful creatures and it can be a joy to watch them play for hours on end. Neck biting between cats is a very common playful gesture.

You will see neck biting happening between adult cats but more often in kittens as they tend to be more playful when younger.

Did you know that a kitten has almost three times more energy than an adult cat?

It can be even more for hyperactive breeds like the Bengal or Siamese.

Make sure to spend lots of time playing with your kittens to help burn off all that excess energy.

Even though cats are solitary animals by nature, there is a pecking order within a cat colony or community.

The instinct to dominate is also commonly observed between friendly cats of the same household. They usually take turn’s biting each other’s necks and it is playing cats do this often.

Other gestures of dominance can also be from paw punching the other cat’s head, mounting the cat or even putting the cat in a chokehold.

Cats are very territorial in nature and won’t hesitate to engage in conflict to safeguard their territory and resources.

This can happen in multi-cat homes when there might not be enough necessities to go around. For example, food and water bowls, toys, scratching posts, litter boxes and beds.

The most dominant cat will be biting the necks of other cats to assert dominance and discourage them from using the above items. If unsupervised, these neck biting actions can turn into full-on catfights. 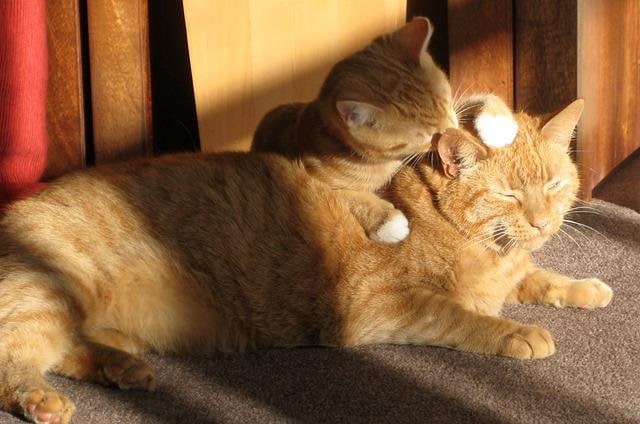 Cats love to groom themselves and each other within a community. They can spend up to hours a day just licking and pruning their fur.

The thing about cats is that they can get easily overstimulated due to the large number of sensory nerves located throughout their body.

Once a cat gets overstimulated, it can turn aggressive and start to bite and scratch.

In this scenario, one of your cats might be grooming another cat too enthusiastically causing discomfort after some time.

The cat being groomed will suddenly bite the neck of the other cat as a subtle warning that it has had enough.

You might also notice the same behavior when your cat nips at your hand after petting it for a while. It is your cat’s way of telling you to stop and it is a good idea to listen before your cat turns more aggressive.

Mother cats will also engage in neck biting with their kittens during a grooming session. This is to keep them still so that she has time to groom them properly.

Cats are known to be one of the most effective hunters in the animal kingdom with a hit rate of almost 50%.

This means that they can catch and kill every other prey that they hunt for food.

In order to keep their hunting skills sharp, cats will engage in neck biting with other cats as part of their practice regime. Animals that hunt will often go for the neck of their prey as that is a very vulnerable body part.

However, there are some cats that will go hunt for prey like a mouse and present it as a gift to their owners. This can be considered rather gross if the mouse is dead or half eaten. There might be times when the mouse is still alive and can be saved.

Kittens engage in neck biting a lot more than adults as they are still learning how to hunt and kill their prey.

One thing I’ve learned as a cat owner is that a sick or unwell cat can be a very aggressive cat. If your cat has an underlying medical issue that you are not aware it, this cat can lash out at other cats by biting their necks when provoked.

They don’t have much patience and can be triggered by the slightest irritation.

Most cats will tend to hide and shy away when not in the best of health. While they are some that will go around trying to pick fights.

How Can I Stop Aggressive Biting In My Cats?

All in all, neck biting between cats isn’t really a cause of concern if it is done out of play. But as cat owners, we need to step in when things start to turn aggressive.

Here are some ways that can stop or reduce aggressive biting. 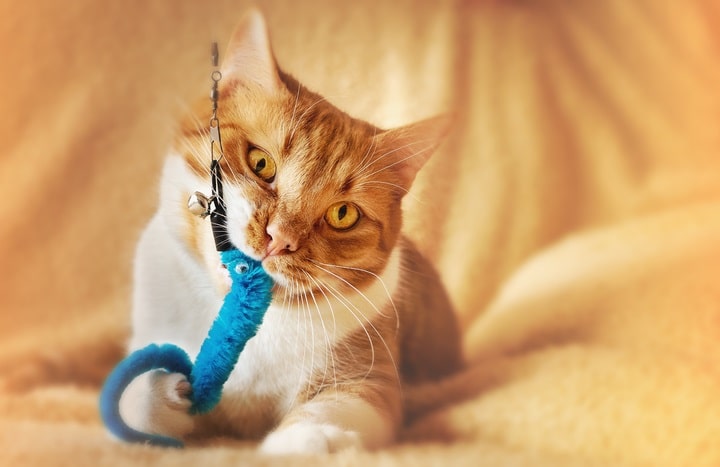 Trying to redirect or distract your cat to snap its attention and energy from neck biting is a good form of behavioral training.

Whenever you notice your cat start to get aggressive or biting the neck of another cat, use one of its favorite toys to distract it.

Make sure to not reward your cat or it might think you are condoning its bad behavior.

Naughty kids get punished with time outs by sending them to their rooms or made to stand in the corner.

You can’t order your cat to do that but you can put it in a locked room for a few minutes when it is being aggressive with its neck biting.

Make sure to also tell it firmly ‘No!” to convey your displeasure.

Your cat might meow and scratch at the door wanting to get out but don’t give in too soon. It should settle and calm down after a few minutes.

You can then proceed to let your cat out.

Please do not lock your cat in the room for hours unsupervised. That is not how you do a proper time out with your cat.

For cat owners with more than one cat at home, make sure to get them all sterilized. Intact male cats are known to be more aggressive and territorial during mating season. This can cause unwanted fighting and biting behavior at home.

A neutered male cat will be less inclined to tussle for territorial at home since its sex hormones are no longer present.

The same thing can happen with your female cats so make sure to get them spayed.

Another important thing about fixing your cats is that it helps to prevent unwanted pregnancies. This helps to keep the cat population under control.

A cat can reach sexual maturity at four months old and can have up to 200 kittens in its lifetime.

The sad thing is many of these cats are euthanized at shelters countrywide as there just isn’t enough space and funds to look after them.

There is a Trap Neuter and Release program that helps to control the population of stray and feral cats. This is something that you can get involved in if you notice many unsterilized stray cats in your neighborhood.

Ensure Adequate Necessities For Each Cat

If you have a few cats at home, make sure that each cat has its own set of necessities. They should not be sharing their food/drink bowls and litter boxes.

Some cats won’t use the same litter box as other cats. This means that it will seek out other areas in your home as a litter box. They can start peeing and pooing on your sofa, laundry basket and god forbid, your bed.

And that is really the last thing you want happening.

Believe me when I say that nothing reeks as badly as a cat’s urine outside of the litter box. It is one odor that can be really difficult to get rid of.

Get each cat a separate litter box to use in different areas of the house and you will save yourself hours of sweat and headache.

If possible, prepare a private area for each cat where they can retreat and relax or sleep. In most cases, cats are fine sharing beds or cuddling up with each other for a nap. But there will be times when a cat just prefers to be alone.

Time For A Vet Visit

Cats are masters of disguise and can do a good job hiding their illness. But if you notice a particular cat that has been acting out of sorts and biting your other cat’s neck for no rhyme or reason, it could be due to a health issue.

Hormonal imbalances and nervous system diseases can cause your cat to react this way.

It would be best to bring your cat to the vet for a thorough check.

Don’t get too alarmed when you first notice your cats roughhousing and biting each other’s neck. Cats are playful and like to expand their energy by getting in some good old tumbling and biting.

Make sure that it remains at a playful level and does not escalate to aggressive biting that can cause harm to either cat.

Make sure to put a stop to any unwanted aggressive behavior immediately. If you are not able to resolve it, please take your cat to the vet for medical advice.