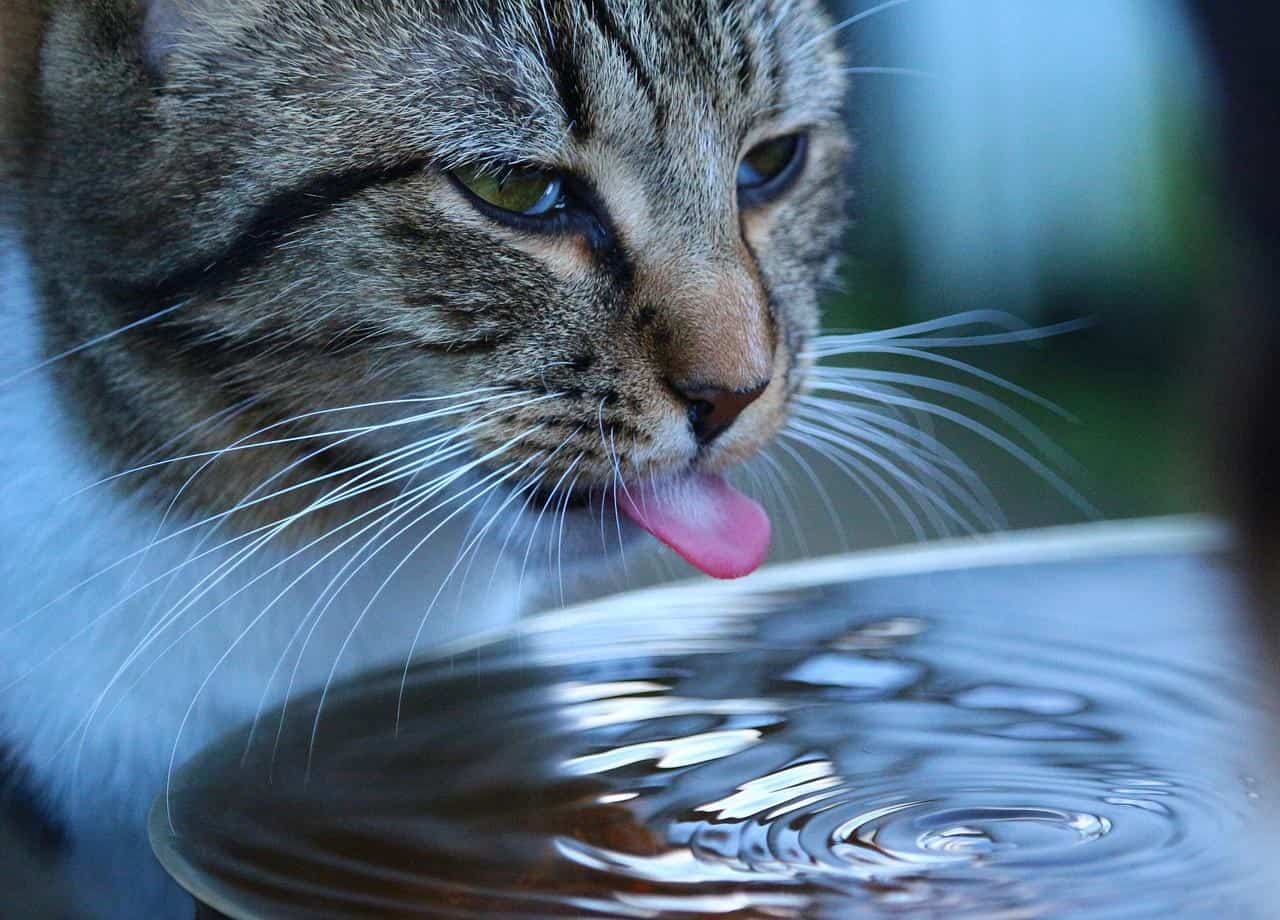 When it comes to drinking water, my cat is a klutz. Most of the time when I walk past the water bowl, half the content of the bowl is on the floor and his front paws are soaked. I’m not sure if he realizes that the bowl is a little small to take a dip in.

Strangely enough, I’ve noticed that my cat scratches the floor before drinking some water at times. He does the same thing when he wakes up from his slumber behind my laptop.

It seems that some cats scratch the floor near their water bowl out of instinctive behavior. Some cats might regard their water source as a valuable resource that they need to dig for. If you have other pets at home, your cat is trying to mark its scent to tell the other pets to keep away.

Before you bring your cat to the vet, such behavior is rather normal and your cat is operating from a very deep part of its brain.

Let us take a closer look at the possible reasons that can make your cat behave this way.

Your Cat Is Being Territorial

Our cats weren’t as domesticated as they are now compared to many moons ago. During the early days, many cats had to fend for themselves once they leave their mother’s nest.

Being solitary creatures, they don’t hang out in packs like dogs. They roam the lands by themselves, only coming to mate when the time is right.

Once a cat finds a water source that it can drink from, its feline instinctive behavior will be to mark it with its scent.

Cat paws contain scent glands in them which leaves the cat’s scent signature on whatever the cat scratches.

This is to let other animals or other cats in the same area know that this water source is taken and trespassers won’t be treated nicely.

Back to the present times.

Your cat doesn’t have to fend for itself now that it has its own personal butler a.k.a you. But it is hard to defy one’s instinct that has been so deeply ingrained.

Your Cat Is Trying To Hide Its Water Source 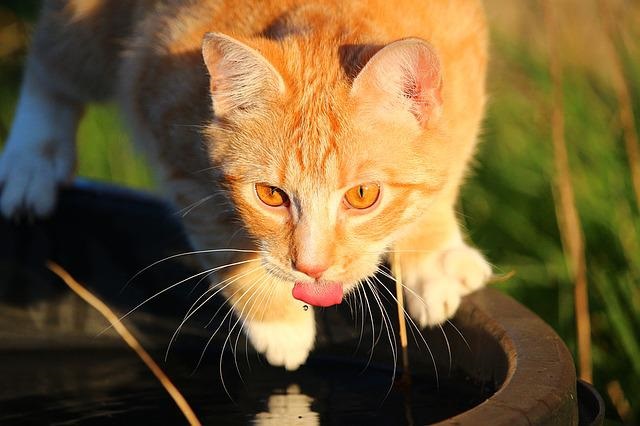 Unfortunately, wild cats don’t have their own personal fridges in nature to store their water in.

Besides marking its scent at the water source to discourage nosy intruders, the cat might also try to dig the ground around the source to try and cover it.

This adds as an additional form of a deterrent if its scent isn’t effective enough. It might seem counterintuitive to cover a water source and dirty it.

But having some ‘not so clean water than no water at all could be the difference between life and death in the wild.

Your Cat Is Contented

Scratching before drinking isn’t the only action that your cat can do with its paws. You might have also noticed your cat kneading the area in front of your cat’s water bowl before taking a sip.

The action of kneading in cats is similar to meditation in humans. It is comforting, cathartic and relaxing. Many cats love to knead the blanket or bedsheets before going to bed.

Cats learn how to knead when they are little kittens. Being born deaf and blind, all they had going for them was their sense of smell and telling mommy cat to release some milk by kneading around her nipple.

As kittens get older, they don’t longer need their mother’s milk to survive but the urge to knead when they feel comfortable and contented.

Your cat could be kneading in front of its water dish to convey its comfort and pleasure. Cats enjoy the simple things in life like taking a nap on the window sill or chasing a feather.

Having a permanent water source where they can drink water 24/7 could be a dream come true for some cats.

Your Cat Is Digging Up Water

Did you know that cats are actually desert creatures?

This means that water is very scarce for them and they get most of their fluids from the critters that they eat.

If they can’t get enough water from their food, these wild cats will have to go water hunting in the desert by sniffing out pockets of water buried under the sand.

Your cat might be able to smell and sense the water from the water bowl. But its feline brand is telling your cat that the water is buried underground and not in the water bowl in front of it.

This is why you might see your cat digging and scratching the floor before drinking water. your cat thinks it still needs to source for water like a wild cat.

Why Does My Cat Scratch The Floor Before Eating? 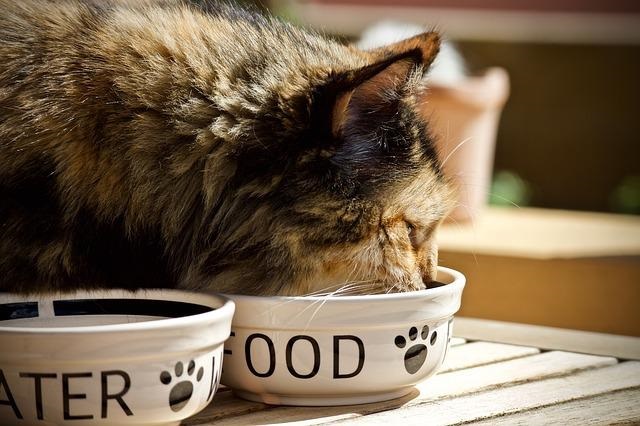 The same feline instincts apply to your cat’s food bowl as it does to its water bowl. Your cat could be scratching the floor before eating for the following reasons:

Hiding The Scent Of Food

Cats are known to be amazing hunters and predators. In fact, cats have one of the best kill success rates in the animal kingdom.

However, that does not make cats the apex predator in the wild. There are other bigger predators like foxes, coyotes or eagles that can prey on cats.

To prevent other predators from picking up the scent of food, the cat will bury its catch to mask the smell.

Doing so will not alert the other predators of the cat’s presence.

Saving The Food For Later

Cats are known to bury their excess food for later. Burying the food prevents other animals from detecting it and by burying the food underground, it helps to keep the meat cool and fresh

The cat will go about its business and come back to the buried spot once it feels hungry again. If you find your cat trying to ‘bury’ its food often, it could be that you are giving your cat too much food at one serving. This can apply to both wet food or dry food.

Try splitting the serving size into smaller ones or feeding your cat less.

How To Stop My Cat From Spilling The Water Bowl?

If you have a cat like mine that has a tendency to wet the floor with its water bowl, here are some ways that you can use to keep the floor dry.

Use A Heavy Ceramic Bowl

Using a ceramic bowl that has a wide base can prevent your cat from toppling it over. Furthermore, ceramic is a lot heavier than plastic or stainless steel which are the more popular water bowl materials.

There are some downsides to using a ceramic bowl that cat owners need to be aware of. Ceramics can chip or break and these sharp edges can hurt your cat.

The glaze used in the making of ceramic bowls can contain lead which is harmful to cats. If your cat is just staring at its water bowl but not drinking, it could be due to the taste and smell of lead in the water.

If you do plan on using a ceramic bowl, please handle it with care and make sure it’s cat safe.

Just stay away from plastic as it’s just a bad material for cats to eat and drink from.

Use A Cat Fountain 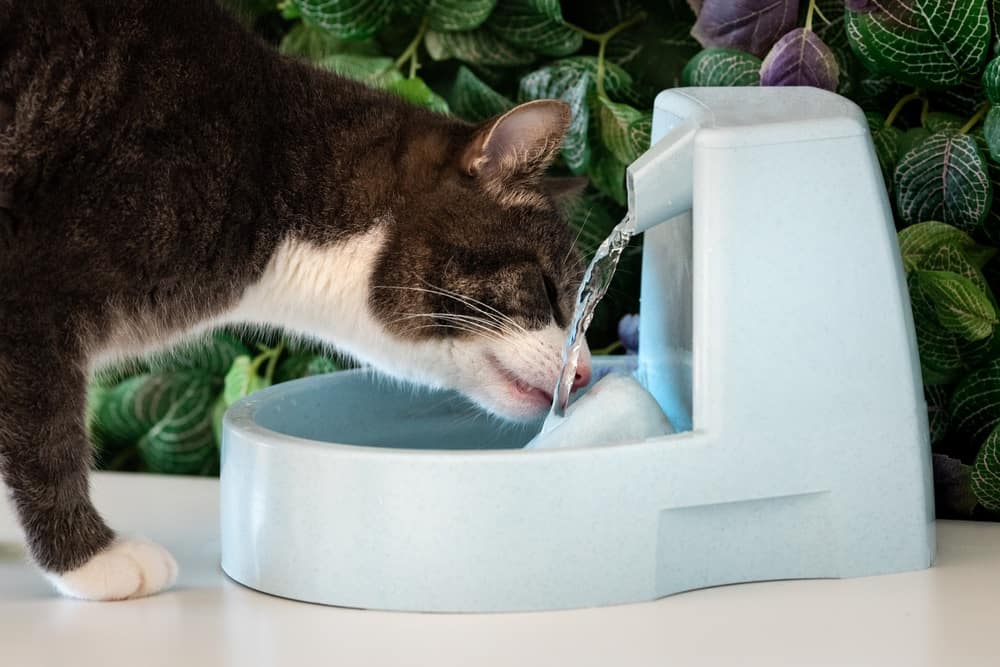 If your cat likes drinking from the tap or playing with water, a water fountain for cats can suit both needs.

In the wild, cats are programmed to drink from running water as it’s fresher and safer than stagnant water.

It is also a lot harder to tip over given its size and weight. Your cat will be too busy playing and drinking to bother about scratching.

The downside to having a cat water fountain is the upkeep.

I’ve had one before and had to clean out the filter and insides once every few days as it tends to get slimy.

Make sure to get a water fountain where the filter is sold separately. Cheaper to just replace the filter than to get a new fountain for your cat.

Why Does My Cat Scratch The Floor After Using The Litter Box?

The relationship between your cat and its litter box can be a love-hate affair. It can be fine and dandy for one week and an all-out war during the next.

Some cats scratch the floor after using the litter box because there are some issues.

It’s best to make sure that your cat has no issues with its toilet or you might find your feline using your laundry basket to poo and pee in.

Don’t be concerned if you find your cat scratching the floor before drinking water. Your cat is just acting out on its feline instinct.

More importantly, you need to endure that there is always fresh drinking water for your cat at all times.