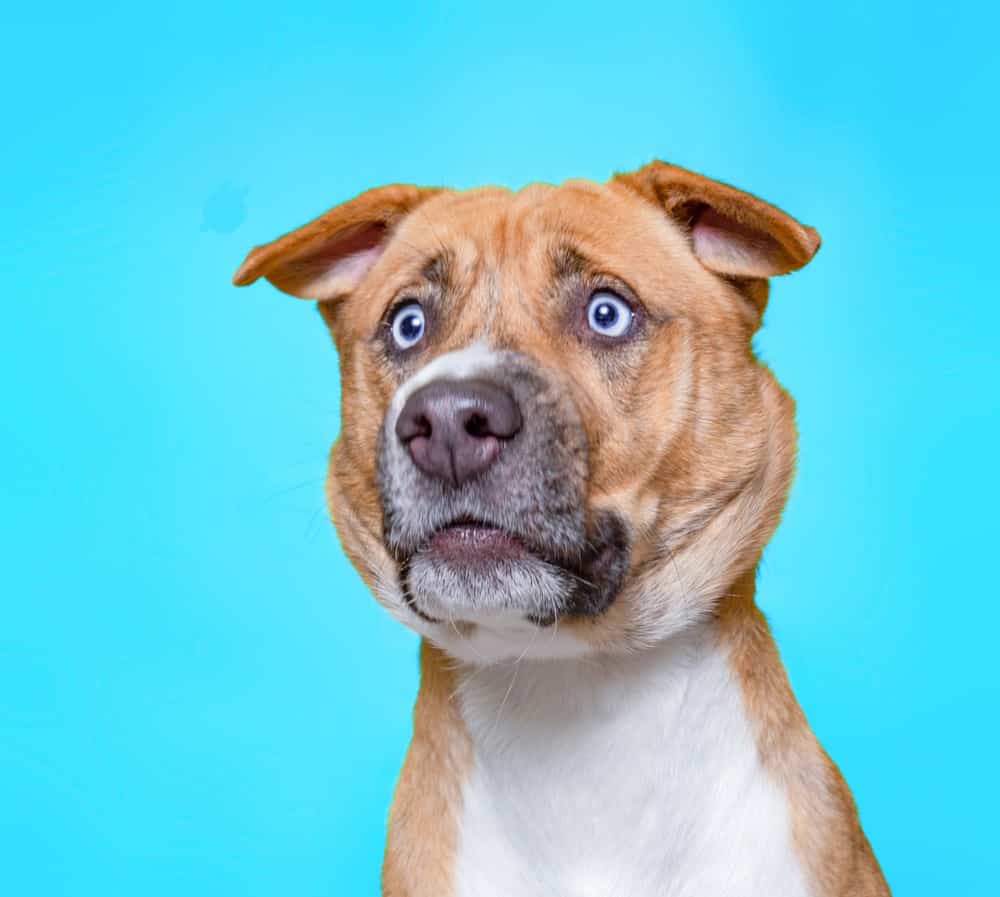 We all have that one friend or family member that never needed to use the toilet even when going on long car or plane rides. These lucky few were born with a bladder or bowel of steel that transcended all natural urgers.

When it comes to dogs, the number of hours that they can hold their poop can vary from dog to dog. But what if you are planning a long overnight trip with your dog or just got a new puppy? How long can most dogs usually hold their poop overnight?

Most healthy adult dogs can hold their poop in for about 8-12 hours after the last meal. It depends on a few factors like their current diet and the owner’s schedule. Puppies tend to need to use the toilet a lot more frequently than older dogs due to their eating habits.

In this article, we will try to further understand the poooping frequency of most dogs and whether it is a good idea to make your dog hold it in.

How Long Can Dogs Hold Their Poop? 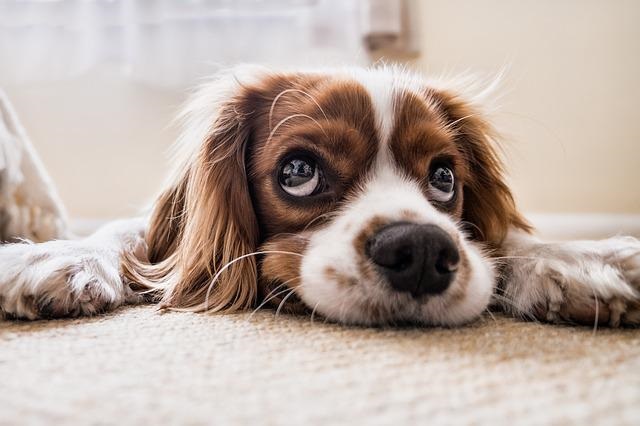 The majority of healthy dogs can hold their poop for about 8-12 hours on average. Based on a little poll that I’ve done on my friends’ dogs’ popping schedule, the majority falls between this range with a few outliers.

The longest I’ve heard was close to 24 hours but that was something that the dog has been doing since young and verified healthy by the vet.

Like humans, dogs too have their own bowel movement schedules that they tend to settle in as they get older.

That being said, it is important to let your dog poop when it needs to. Getting your dog to hold its poop in is not only uncomfortable for your dog but can lead to health issues when done too often. Some owners tend to feed their dogs a late dinner which may cause the dog to poop in the middle of the night. And the last thing any dog owner wants to do at this hour is to go out in the cold.

I am very sure that all of us had close calls with trying to find a proper toilet to unleash the beast when nature called out of the blue. Such episodes are stressful enough to make you break out in cold sweat.

Elderly dogs and younger dogs will have pooping schedules that are more frequent than normal so you need to account for that.

Yes, your dog’s age and natural bowel clock plays a part in its pooping frequency but based on my experience, I noticed the most drastic change in my dog’s pooping timetable when I changed his diet.

When I first adopted him from the shelter, he was kinda addicted to kibbles. I wanted to stop that and started to transition him to canned food first before going to raw.

Well, I’ve said it many times and I’ll say it again, dry food isn’t good for dogs. Even though dogs are considered to be ‘omnivores’, they still do need a high amount of animal protein in their diets.

This is something that dry food can’t fulfill. Many dry dog food contains ingredients like filler, maize and grain which can mess up your dog’s stomach.

My dog started pooing lesser and less frequently on a raw diet and the best part was, his poo wasn’t stinky. Sure, it still smelt of poop but it didn’t make me gag and my eyes water like before.

If your dog’s poo isn’t healthy and pooping frequently, it could be due to its diet.

How Long Can A Puppy Dog Hold Its Poop? 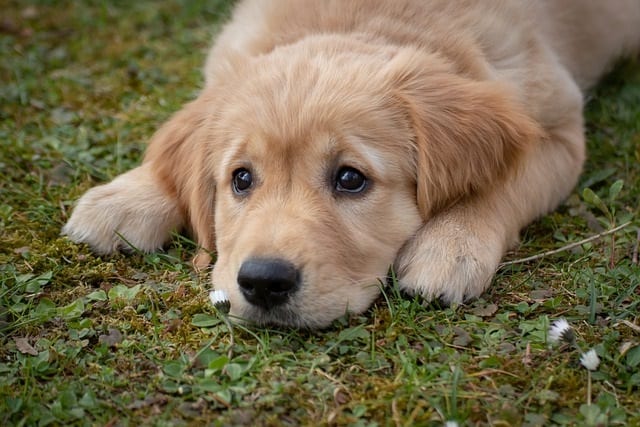 When you have a puppy, ensuring that your little pooch goes to the toilet when it needs to can feel like a full-time job.

Once your dog reaches about eight months old, it should be able to hold its poop for eight hours like most adult dogs.

Even though some dogs have better holding power, it does not mean that a 36-month-old healthy dog can hold its poop for 36 hours!

If you have a puppy at home, you might have to wake up a couple of times during the night to bring your dog out for poo poo (that’s how my dog understands it). Not allowing your puppy to poop when it needs to can cause your puppy to get constipated and have a bloated tummy.

There are a couple of reasons why puppies need to poo so often.

Puppies Eat All The Time

Their appetites only start to slow down at about six months of age but before that, feed them as often as they want to eat.

Diarrhea is common in puppies due to frequent eating and weaker gastrointestinal systems. They might have one to two explosive episodes that tend to clear up quickly.

So even if your puppy is getting older, it might still need to poo often because of diarrhea.

Take this from me, puppies don’t have strong holding power compared to older dogs. So if you don’t make it a point o take your dog out to poo, don’t say I didn’t warn you when your dog poops all over the house or in the crate.

How To Plan For Your Dog’s Pooping Schedule? 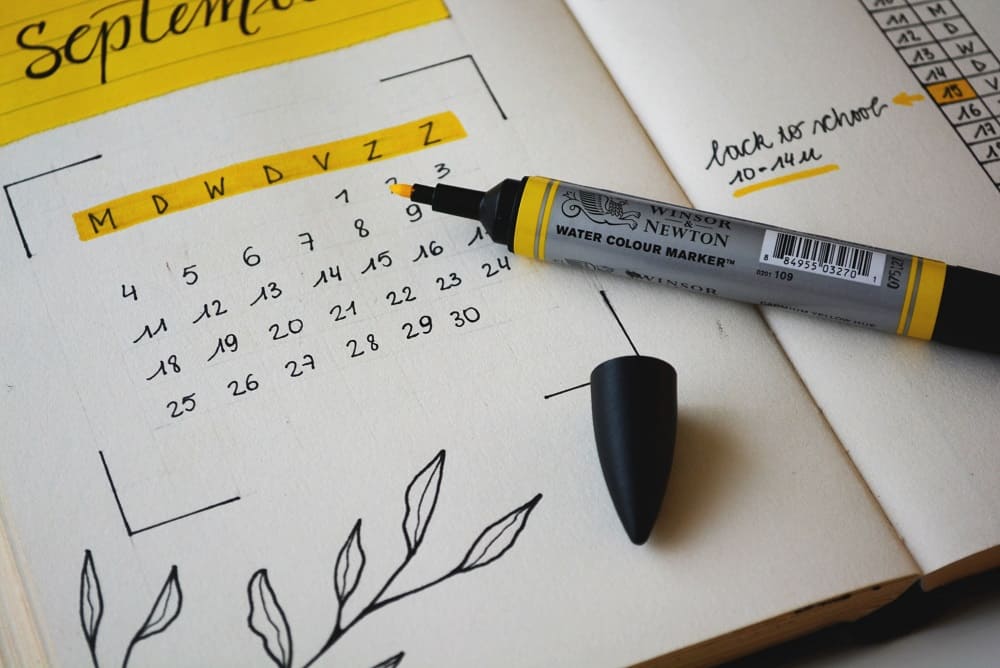 Most of the time, we tend to plan our schedule around our dog’s toilet time or at least I do. I will make sure that either I or a family member is around to take my dog out to prevent any bowel mishaps at home.

But what if you need to take a long-haul flight with your dog or something crops up and you can’t get to your dog in time?

Use The Toilet Before The Flight 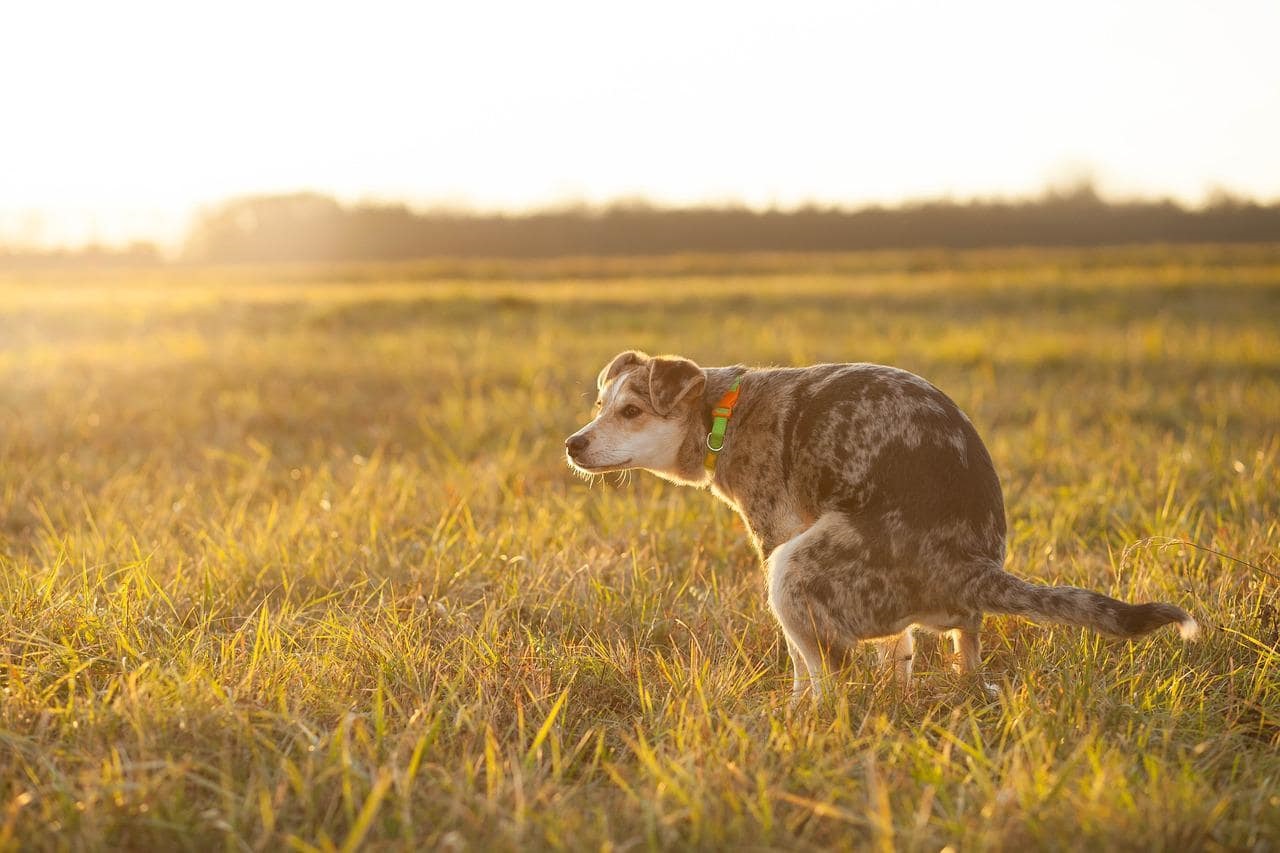 If your flight time might coincide with your dog’s toilet schedule, you need to do what you can to make your dog poo or pee before the flight. Most dogs on board a flight have to poo inside their carriers unless it is a service dog.

However, this is something that we should try to avoid to make the journey a lot more pleasant for everyone in the cabin.

Here are a few things that you can try:

Install A Dog Door On Your Door

I know that dog flaps aren’t popular with dog owners as they also give access to other animals in your home which can be dangerous.

These days, there is such a thing called a dog door that will only open based on your dog’s microchip. This prevents other animals, domesticated or wild from entering your home uninvited.

Another downside with dog flaps is that it is only good for smaller dogs. You can’t get one large enough for a dog like a Husky or St bernard. But dog doors come in sizes large enough for very big dogs.

You just need to properly train your dog to access the dog door when no one’s at home during toilet time and defecate in your garden.

This works well if you live in a house and have an erratic schedule.

Get Someone To Help

But what if you live in an apartment where installing a dog door isn’t a solution? You can’t expect your dog to take the lift or stairs down and poo at the closest grass patch and return safely.

There are many doggy daycares and dog sitters that are able to help when your schedule goes out of wack.

Use a doggy daycare or a trusted dog sitter to come by your place to help with your dog if you can’t make it home in time. These are great to use when you can’t get anyone else to help.

Is It Healthy For My Dog To Hold Its Poop?

Nothing bad is going to happen to your dog if it misses its toilet break but a little while every now and then.

Most healthy dogs can hold their poop longer if necessary.

But if this is something that happens frequently or your dog has been holding in its poop for a very long time, that won’t be good for your dog.

It can cause your dog’s intestines to swell up and become impacted. This can cause canine bloat which is very painful for your dog.

Frequent holding in of the poop can also cause your dog to have chronic constipation. This can lead to a condition called megacolon whereby the stool in the intestines hardens and causes an obstruction.

These gastrointestinal problems aren’t minor and can even be fatal in some cases.

Young dogs, adult dogs and elderly dogs all have their own personal and unique bathroom habits. We as dog owners have to respect that and do what we can to take our dogs out for their toilet breaks when required.

Forcing your dog to hold it in all the time isn’t good and can lead to gastrointestinal issues. 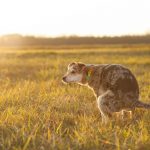 Dog Suddenly Waking Up In Middle Of Night To Poop? 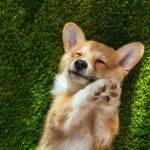 Why Does My Puppy Have A Big Belly? 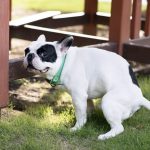 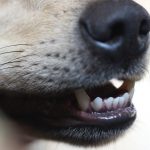 Do Dogs Vomit When Teething? Here’s What To Expect