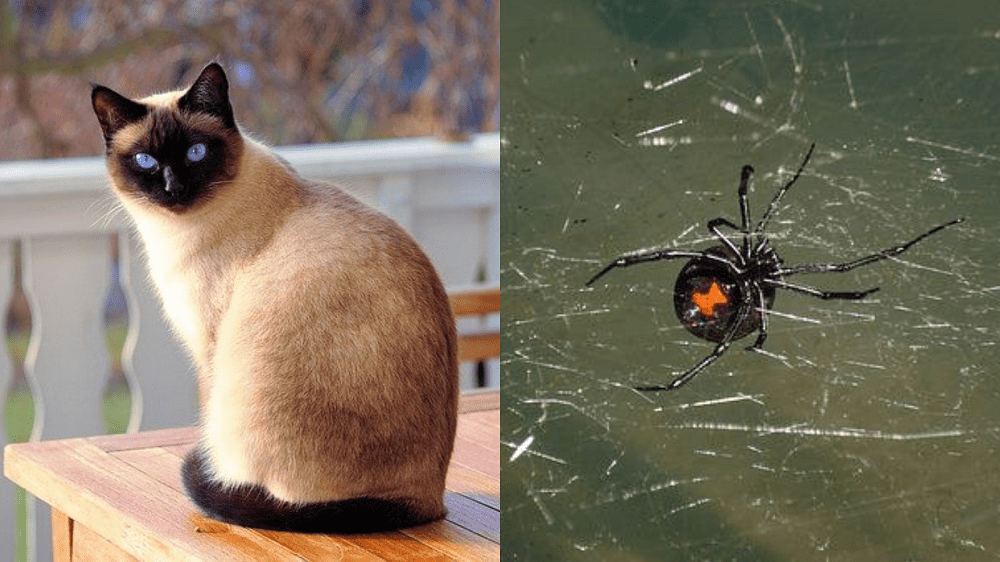 During my younger days, we used to have movie nights with my parents. There was once when my dad wanted to watch “Arachnophobia” and that sure didn’t end well.

Arachnophobia is the irrational fear of spiders which was further magnified during the movie. A spider behind the screen is can’t do much harm. But things could get hairy if your cat were to encounter a black widow spider.

Can black widow spider bites gravely hurt or even kill a cat?

Yes but only if the black widow bites your cat. The black widow spider venom is strong and deadly enough to cause a lot of pain and damage to your cat’s body. Ingesting the spider can cause some discomfort but it won’t be fatal. All spider bites need immediate medical attention.

What Is A Black Widow Spider?

If the name ‘Black widow’ spider isn’t scary enough to strike fear in you, you are a very brave soul. The spider got its name from eating the male after the mating process is complete.

This spider is found in temperate countries and is easily identified by the red hourglass marking on its belly. Only the female spiders have this marking and are known to be more deadly than the male.

Even though black widow spiders are no bigger than a standard paper clip, their venom is known to be 15 times more potent that a rattlesnake.

The black widow spider venom is considered a nerve toxin that can cause the following symptoms:

The good news for most adult humans is that the black widow spider bite isn’t usually fatal. But kids, the elderly, sick individuals and pets, the bite can be fatal if it isn’t treated immediately.

How Do Cats React To Black Widows? 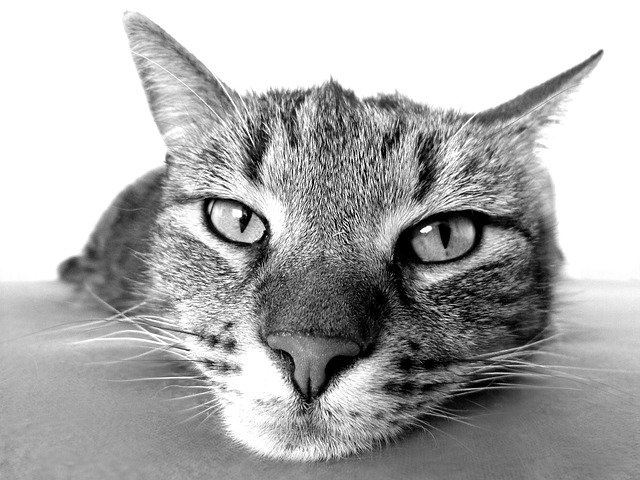 When the black widow spider bites your cat, the venom will be injected into its bloodstream. It can take about 30 minutes for the effects of the venom to show. It can be faster depending on your cat’s health and size.

If your cat has ingested the black widow spider instead, it can get sick and experience gastrointestinal issues but it won’t be fatal for the cat.

The common symptoms of a black widow spider bite in cats are:

It can be difficult to spot the bite mark on your cat’s body due to its thick fur. But if you happen to see a black widow spider nearby, you need to bring your cat to the vet immediately for treatment.

It can take less than 24 hours for the venom to do its damage and kill your cat.

Your cat will have to be hospitalized and given supportive care. Anti-venom drugs will be administered to your cat to help neutralize the black widow bite.

Muscle relaxants and pain killers might also be given to help with muscle pain and stiffness.

Do not use a tourniquet at the bite site to try and slow down the spread of the venom. This can make matters worse by killing off blood circulation to the affected area.

Can A Cat Survive A Black Widow Bite?

Due to the sensitive nature of a cat’s neurological system, there are more at risk of dying when bitten by black widow spiders.

The key to saving your cat is swiftness. The faster your cat gets treated the better its chances of survival. 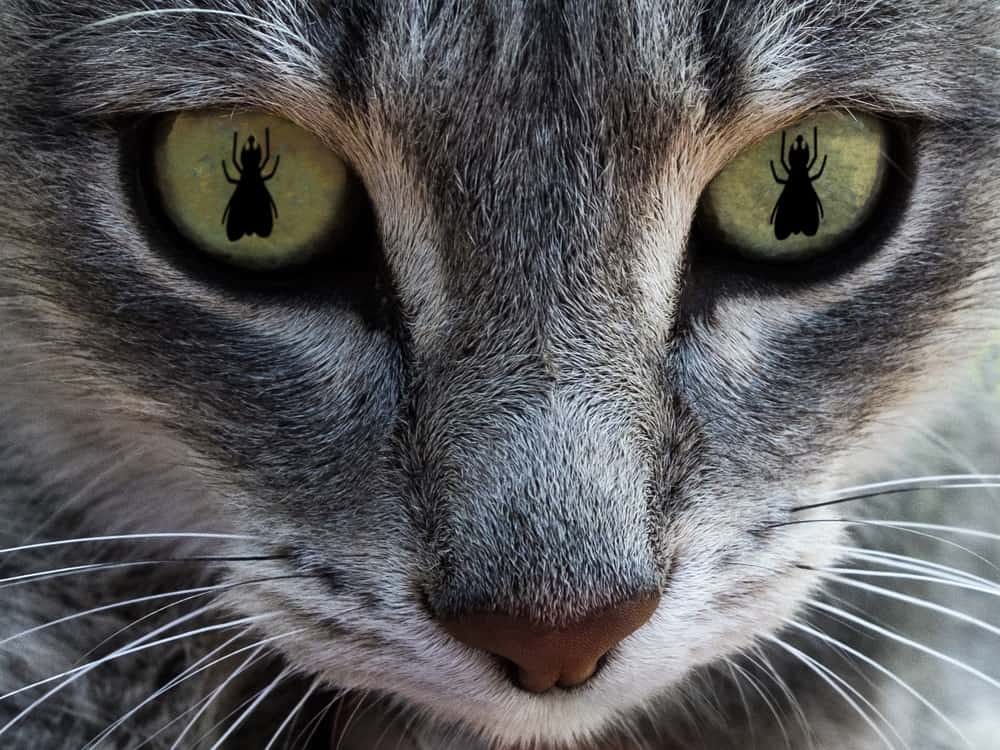 Cats have a very curious and inquisitive nature which can get them into trouble at times. They love to investigate something new that they have not seen or smelt before.

Insects can be particularly interesting to cats due to their predatory instincts. Cats in the wild are known to eat eggs and insects when food is in short supply.

Dr. Meghan Herron from Ohio State University says that “This bug hunting phenomenon seems to have its basis in behavior and not biology”

Even if your cat doesn’t have an appetite for insects, the way that these creepy crawlies move can stimulate the prey drive in your cat.

It can be fun for your cat to try and chase down the spider and bat it around with its paws until your cat gets bored.

The good thing is that black widow spiders are not aggressive in nature despite what their name suggests.

They usually only bite the prey that has been caught in their net.

That being said, a black widow won’t hesitate to bite in self defense if it feels that its life is being threatened by your cat.

However, the first reaction of the black widow spider would be to drop from the web and play dead. If this doesn’t deter the pets, it will then proceed to bite if your pet gets any closer.

How To Protect Your Cat From Dangerous Spiders?

With over 30,000 different types of spiders in the world, they are everywhere. And the chances of your cat encountering one is very possible.

However, there are some things that you can do to try and minimize that risk.

Spiders like to build their nests in forested and. grassy areas. If your cat frequents such areas when it is outdoors, there’s a high chance that it can get bitten by a venomous spider.

Furthermore, there is a chance of your cat running away or getting into accidents when it’s outside.

Your cat can be happy and contented by being a pure indoor cat.

If you do want your cat to experience the outdoors, use a cat harness and don’t let your cat go near areas where spiders might nest.

Keep your Home Free Of Clutter

Spiders are attracted to clutter as it gives them an ideal environment to build their nest. Check your attic and basement for such clutter as we tend to use these places as storage.

If you have a garden or a barn, get rid of rocks, woodpiles and leaf piles to prevent spiders from building their nests.

It would be good to not let your cat access these areas too.

Use A Natural Deterrent

It might not be possible to clear out all the clutter from your basement and attic. Use a natural deterrent that is made from vinegar or citrus fruits to keep spiders away.

Just add water to some vinegar or lemon juice and spray at areas that make good spider hideouts.

You will need to refresh the scent once every few days to make it effective.

If you spot the web of the black widow at home or on your premises, it would be a good idea to get it removed.

Don’t do it yourself if you do not know how to properly dispose of the spider. Call a pest exterminator who can do a proper job.

Can A False Widow Kill A Cat?

A false widow is a spider that is frequently mistaken for the black widow spider hence its name.

Although the false widow spider has a venomous bite, it isn’t as potent as the venom of the black widow spider.

That being said, a less potent venom doesn’t mean that it can’t still be fatal for cats. This spider is regarded as the most dangerous among spiders that bite in the UK.

A cat called Hades was bitten by a false widow and was fighting for its life. Thankfully his family got him to the vet quickly enough and he survived.

Venomous Spiders That You Need To Be Aware Of

The black widow spider isn’t the only species that can be deadly to cats. There is also the brown recluse spider and hobo spider that can be just as venomous.

The venom of these spiders can also cause a large area of cellular damage and destroy red blood cells.

Other insects that you should keep your cat away from:

This isn’t an exhaustive list but these insects can be commonly found in our homes and gardens.

I know of some pet owners who use their cats as pests exterminators. This is a really bad idea because there is a danger of your cat being bitten or stung by something venomous.

Even if the insect is non-venomous, eating pests like roaches can be toxic to cats.

Do your cat a favor and train them not to regard creepy crawlies as play things.