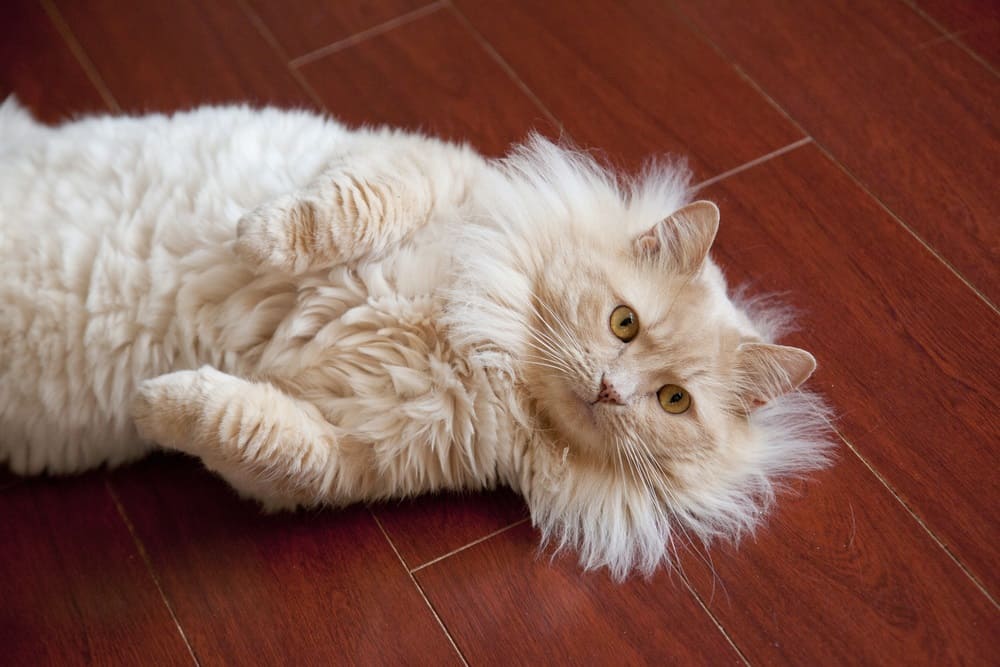 My cat does this pretty interesting thing when he sees me. He will give me a little cute meow, walk a little towards me, tuck his head in towards his chest and flop over like a baby panda.

I have to say that when my cat flops over, he really does flop no holds barred. I can see his soft ‘chonkiness’ wiggle and wobble when his body hits the ground.

Cat owners out there, I’m pretty sure you would have seen your feline friend flops down in front of you.

But why do cats do this?

When cats flop down in front of someone, it signals trust and comfort from the cat. By flopping over, the cat is in one of its most vulnerable positions as its belly is exposed. There are more possible reasons for such behavior but it usually stems from affection and comfort.

Let us take a deeper look at this welcoming feline gesture that has to be one of the cutest things that your cat can exhibit.

Why Does My Cat Flop Over In Front Of Me?

In order to understand and appreciate your cat, you need to learn more about your cat’s behavior They say that a picture is worth a thousand words and your cat rolling and flopping in front of you does say a lot too.

You Cat Wants Your Attention

Cats are demanding pets not so much in upkeep but when they want something, they want it NOW.

When cats flop over in front of their owners, it is a sign that they are seeking attention. Truth be told, how many of us cat lovers can resist going ‘goo goo ga ga’ over a soft and furry cat that has presented itself right in front of us?

It is your cat’s way of saying “I’m here looking all cute and cuddly, so stop whatever you are doing and pet me!”

Sometimes, my cat picks the most inappropriate of times to flop down in front of me. Like when I’m rushing to use the toilet or late for work.

But when a cat wants it, a cat will find a way to get it.

If your cat loves getting a belly rub, you might have a rare one on your hands.

When cats flop over, the main body part that is being exposed is the belly. Being on their backs with bellies exposed is a very vulnerable position for cats.

If you have ever had the honor of touching your cat’s belly before, you will know just how soft it is.

Under the belly lies many of your cat’s vital organs.

In the wild, being caught off guard in such a vulnerable position by a predator or other cats could put the cat in a lot of danger. Even if it survives an attack, any injury to such a vulnerable area will be very painful and eventually fatal.

Even if your cat likes getting its belly rubbed, you still need to exercise some caution. Overstimulating your cat in this area can cause your cat to hit you with its paws as a warning signal.

I know how soft it feels like to touch a cat’s belly but it can start to feel uncomfortable for your cat after some time.

Once you notice your cat hissing or thumping its tail against you, it’s best to stop before it scratches or bites you.

Your Cat Is Feeling Playful 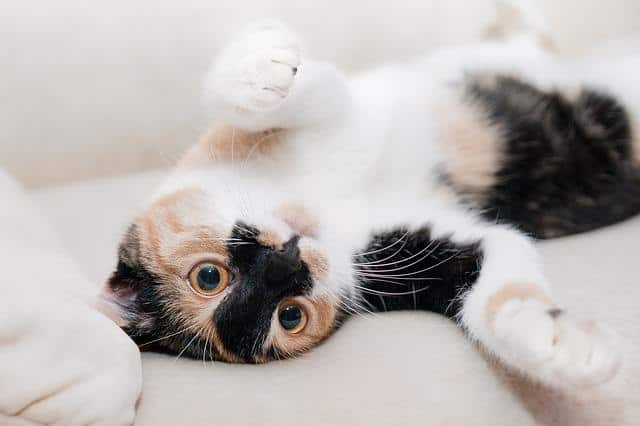 When your cat flops over, it could mean that it wants to play. Cats love some daily playtime with their owners to keep them stimulated and engaged.

How I differentiate a playful flop from an attention-seeking one is how my cat reacts after rolling over.

If he is in the mood to play, he will quickly get up and run away after flopping over. He will do that a few times to get me to chase him or throw him his favorite cat toys.

If it’s attention that he is after, he won’t move a muscle after flopping over and expects me to lay on the loving.

Your Cat Is High On Catnip

Some cats can have a love-hate relationship with cat nip. Catnip is a plant from the mint family. If you have smelled it before, it pretty much smells like mint leaves.

There is a chemical in the plant called Nepetalactone that can trigger a variety of responses when a cat smells it.

The most common ones are:

I’ve seen cats go ballistic after smelling catnip like it’s some kind of drug while others tend to be more mellowed out.

Not all cats are affected by catnip though, about 50% do.

The effects don’t really last that long. Most cats revert back to their normal selves after 10-15 minutes.

If you find your cat flopping all over your feet, it might have just taken a big catnip hit and is reveling in the after-effects of it.

Your Cat Is Just Stretching 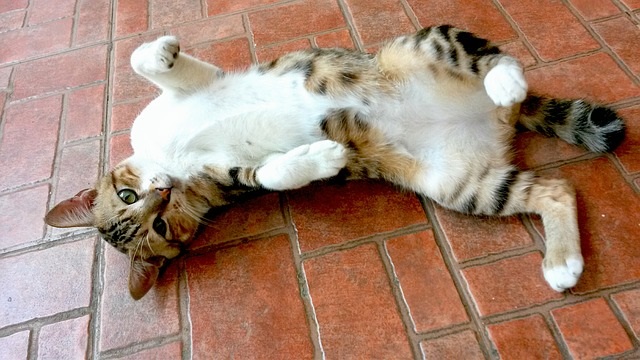 Cats are big on stretching.

If you sleep between 16-20 hours a day, you would be stretching a ton too.

When a cat is asleep, its blood pressure drops which means that there is less blood flow to its muscles. As it starts to wake up, stretching helps to increase the rate of blood flow and remove waste products like carbon dioxide and lactic acid in the cat’s muscles.

Stretching also helps the cat get ready for any sudden spurt of activity that might be required like spotting a prey.

If your cat flops in front of you after waking up from a long nap, it is probably engaging in its usual stretch routine which feels good for the cat.

Just give your cat a few minutes to warm up its muscles.

Your Cat Is In Heat 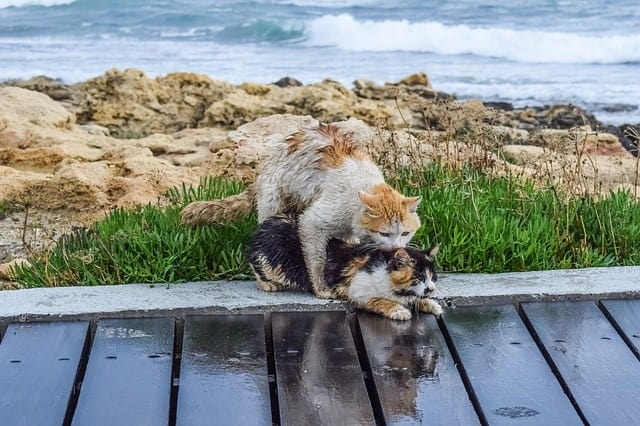 If you have a female cat that is yet to be sterilized, her rolling could signal that she is in heat. Unspayed female cats can reach sexual maturity at a tender age of four months old.

Mating season for most cats happens once a year between February to October. This can vary depending on which part of the world the cat is in due to the number of daylight hours.

Your female cat flopping in front of you is her way of saying that she is ready to mate. Not with you of course but in general.

She can also start to meow loudly till your ears bleed to signal her wanton intentions to nearby roaming tomcats.

If you are not a registered breeder, I would strongly advise you to get your cat fixed. A female cat can have up to 200 kittens in her lifetime and there are just too many homeless cats out there.

Please let us all do our part as responsible cat owners and get our cats sterilized.

Your Cat Is Marking Its Territory

Cats are very territorial creatures and love marking their boundaries with their scents. This is to let other cats and animals know that this area is taken.

Cats also tend to feel more relaxed in areas that have their smell. Similar to us humans having that one security blanket or pillow ever since we were kids.

Your cat has scent glands in many places of its body like the face, paws, anus and flanks. But rolling and flopping itself on your floor, it is marking or reapplying its scent to your home.

Just so you know, your cat is the real owner of the house. You are just a tenant.

Why Does My Cat Flop Over And Bite Me?

If your cat is flopping in front of you but tries to bite when you attempt to make contact, it could be your cat’s way of telling you that it isn’t in the mood for pets at the moment.

When cats roll on the ground, it doesn’t always mean that there are in the mood for affection and attention. Many times they just do it because they feel like it.

Learn to read the room, human!

Why Is My Cat Making Weird Noises And Rolling On The Floor?

If your cat is rolling on the floor and making weird noises, it is just your cat’s way of vocalizing its emotions.

Our cats have evolved to know that certain sounds like meowing tend to get our attention more than other methods.

Cats that are meowing softly, chirping or purring are usually feeling happy, secure and contented. Female cats that are in heat will let out a loud yowling sound which is rather distinguishable.

However, if your cat makes a sound that it is in pain, it would be good to give it an examination to make sure that it isn’t injured or unwell.

Why Does My Cat Flop Over When I Come Home?

The majority of us work full-time jobs and are away from home for most of the day. That means that many cats spend many hours alone at home.

Cats are often portrayed as being aloof and unloving but you know that ain’t true. When your cat rolls over at your feet when you are home, it is their way of saying that they miss you.

Cats are most discreet when it comes to showing that they miss their owners.

They won’t be jumping up and down at the door and wagging their tails.

A cat roll or flop says a lot about its feelings for you.

I can hear my cat meowing at the door when I’m back after being gone for a few hours. He starts doing his flops the minute I open the door.