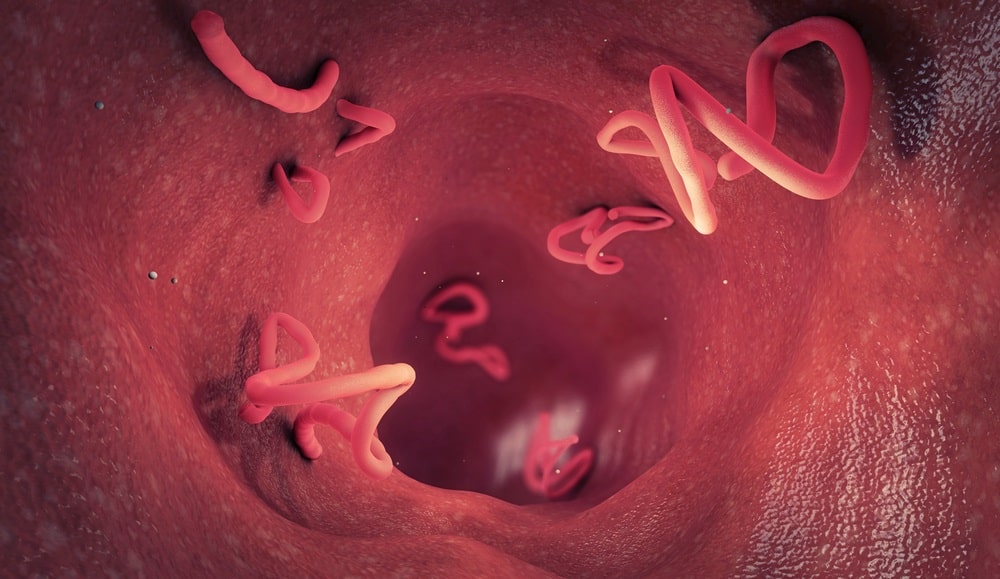 There is one thing that all cat owners need to be doing for their cats on a regular basis. And that is to get their cats dewormed.

Our cats are bound to have intestinal worms in them at some point in their lives.

This isn’t a small matter as many of these intestinal parasites start off living in your cat’s stomach but can migrate to other major organs in their bodies like the heart, lungs and liver.

If left untreated, these parasitic worms can cause serious health risks and even death to cats.

In this article, we will be taking a look at Drontal cat worming tablets which is effective in removing intestinal worms in cats.

We will be looking at how long it takes for Drontal to work and the pros and cons of using a cat dewormer.

Drontal is an oral medication dewormer treatment that can be used to get rid of a wide range of worm infestations in both cats and dogs.

A single dose of Drontal for cats and kittens is effective in treating the following parasitic worms:

The active ingredients in Drontal are praziquantel and pyrantel pamoate. It comes in a pill and is given orally to a cat or kitten.

How Long Does It Take For Drontal To Work In Cats?

Most dewormers available in the market take about 2-4 days for them to work effectively. The Drontal tablet is broken down in the cat’s stomach and absorbed by the worms residing in your cat’s intestines.

If the cat is having a very severe worm infestation, a second dose or more will have to be given until all the worms are killed.

How Drontal Works In Getting Rid Of Intestinal Parasites?

The two active ingredients in the actual medication, pyrantel and praziquantel, do a great job of killing off parasitic worms.

Pyrantel is used for killing off hookworms and roundworms. What pyrantel does is cause seizures in these worms that tend to latch onto the cat’s intestines and feed off its nutrients. This can cause your cat to lose weight even though it is eating normally.

Once these worms seized up, they become paralyzed and lose their grip on the intestines and are eventually passed out in the cat’s feces.

Praziquantel works differently and is more effective in getting rid of tapeworms. This chemical paralyzes the tapeworms and causes them to die a slow death.

The worms are then broken down by the cat’s digestive tract and expelled in the poo too.

How much Drontal to give your cat depends very much on your cat’s body weight.

Here are the recommended dosages for cats:

The tablets are scored so that makes it easier to feed your cat half a tablet as per your cat’s body weight.

An important thing to note is that Drontal should not be given to kittens that are less than a month old or weigh less than 2lbs.

Their bodies won’t be able to handle the deworming tablet which can lead to serious side effects.

How Do I Feed My Cat Drontal? 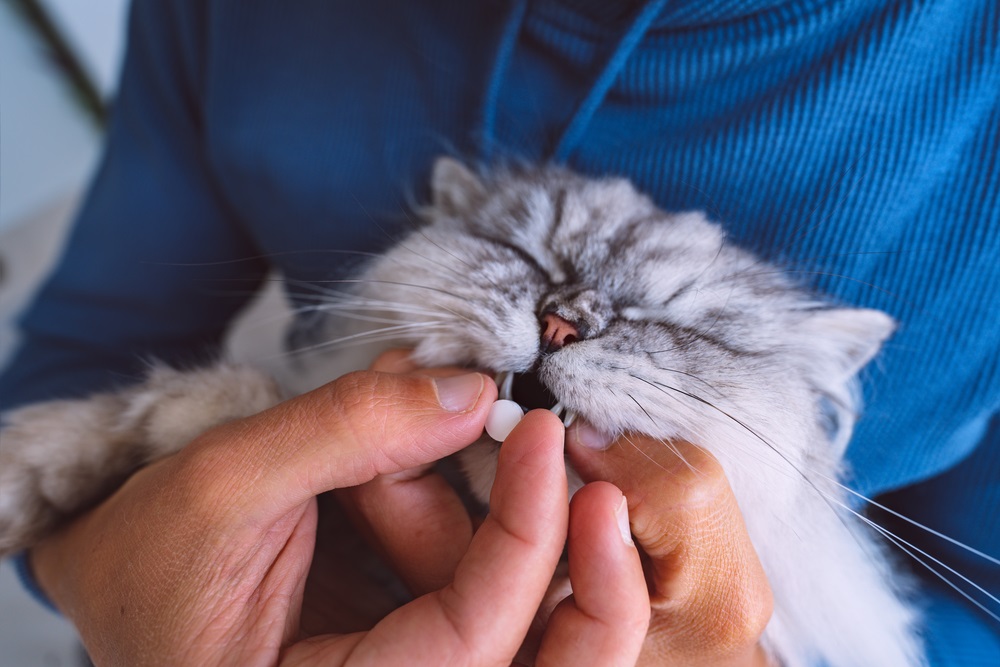 The best way is to feed your cat directly by pilling it. However, pilling a cat can be rather challenging if you or your cat aren’t used to doing it. Some cats can eat a pill like a snack but the vast majority of them will detest it.

Another way to administer the pill is to crush it and put it in your cat’s food. The downside is that praziquantel tastes bitter which can put off your cat from eating its food and wasting the tablet.

The best way is to feed it to your cat directly.

How Often Do You Give A Cat Drontal?

It depends on how severe the worm infestation is in your feline friend. Cat owners will have to check the poo in their cat’s litter boxes for any remaining evidence of intestinal parasites.

It would be best to bring a stool sample to the vet so that it can be examined more thoroughly.

The vet might recommend that you feed your cat another dose once every two weeks or three months, depending on how old your cat is.

It can take a few doses to properly kill off all the larvae and adults worms in a breeding cycle. Otherwise, the chance of reinfection will be high.

What To Expect After Deworming A Cat?

Some cats might show a few side effects after taking Drontal even though it has been proven to be safe for cats in very high dosages.

Drontal for cats contains chemicals that are strong in order to fight intestinal worms. So don’t be too alarmed if your cat shows some adverse reactions after taking it.

Some of the common side effects can include:

These side effects are only temporary and should not last more than 1-2 days.

However, if you feel that your cat is in a pretty bad state after taking the dewormer, please call your vet to let them know.

Some cats are just more sensitive to such medication and can be more badly affected.

How Long Does Drontal Last In Cats?

The Drontal dose that is given to your cat isn’t meant to last long like a vaccine or a slow-release tablet. Its job is to kill off as many of the parasites over the next few days or weeks.

Due to the rather short effective window of such medication, follow up doses are usually recommended by vets.

How Do Our Cats Get Infected By Worms?

Most of the time, worms are more present in stray and feral cats. Domesticated cats that live indoors stand a much lesser chance of being infected by worms as compared to outdoor cats.

These small brownish or white colored worms live in your cat’s intestines and feed on blood. There are usually about an inch in length.

Cats can get hookworm by ingesting the eggs while grooming themselves or drinking infected water. The larvae are also able to burrow themselves into your cat’s body.

These worm parasites look like flattened grains of rice and they feed off the nutrients in your cat’s stomach.

Tapeworms start off small and can grow as long as eight inches!

Cats can get infected with tapeworms by ingesting fleas when cats have a flea infestation or other smaller prey that carry this parasite.

These worms are the most common form of intestinal parasites found in cats. If left untreated in kittens, it can prove to be fatal.

Roundworms can grow up to six inches in length and they swim freely in the cat’s intestines.

Heartworms are not intestinal worms but there is another common parasite that lives in the hearts of cats.

Heartworms are transmitted to cats by mosquitoes.

When a cat is bitten by an infected mosquito, the eggs of the heartworms are transmitted to the cat while the mosquito is feeding on the cat’s blood.

Heartworms are dangerous and can cause a lot of respiratory issues for your cat.

Make sure to take a cat dewormer for heartworms and protect your cat from mosquito bites.

It may sound scary that our precious cats are at risk of being infected by so many different worms.

The best way to prevent these parasites from harming your cat is to get your cat dewormed on a regular basis and make sure that all worms have been excreted by your cat.

Once you know that your cat is clear of these parasites, the best form of prevention is to keep your cat indoors as much as possible.

The less time that they spend roaming outside, the lesser the risk of getting reinfected.