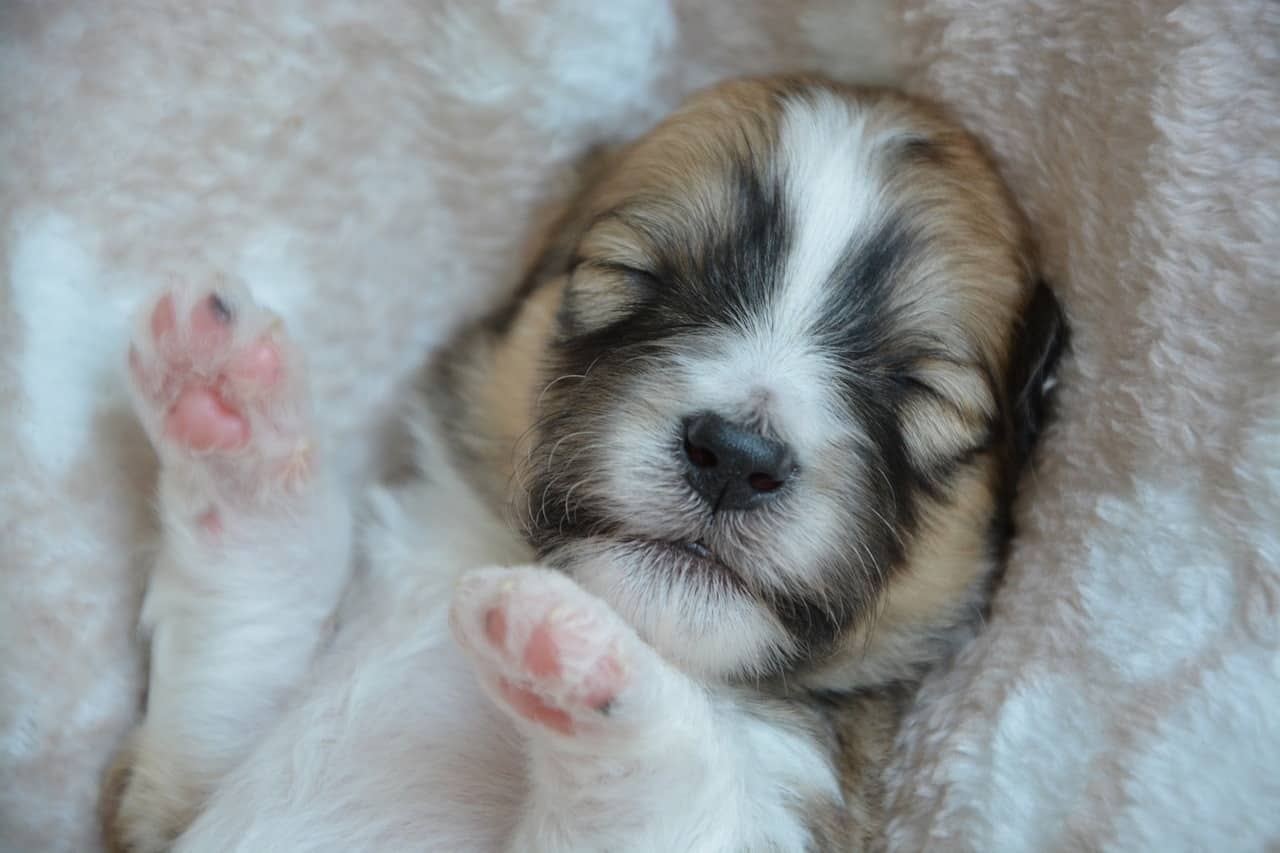 I have to admit that I am not a fan of zombie movies. I can handle the blood, gore and rotting flesh but the thing which freaks me out the most are their eyes. The eyes of a zombie are always so lifeless and some even have their eyes rolled back into their heads. Yikes.

The same thing happened to my dog the other night while he was sleeping. His eyes were partially open and I could only see the white of his eyes. I thought he was having a nightmare or seizure but thankfully he was fine.

Do dogs’ eyes roll back when they sleep? It is possible for your dog’s eye to roll back while it is sleeping. The same thing happens to humans when we sleep. There are times when the appearance of your dog’s third eyelid might make it seem like the eyes have rolled back.

In this article, we will be covering the reasons that can cause your dog’s eyes to roll back while it is sleeping and awake.

Is It Normal For A Dog’s Eyes To Roll Back While Sleeping? 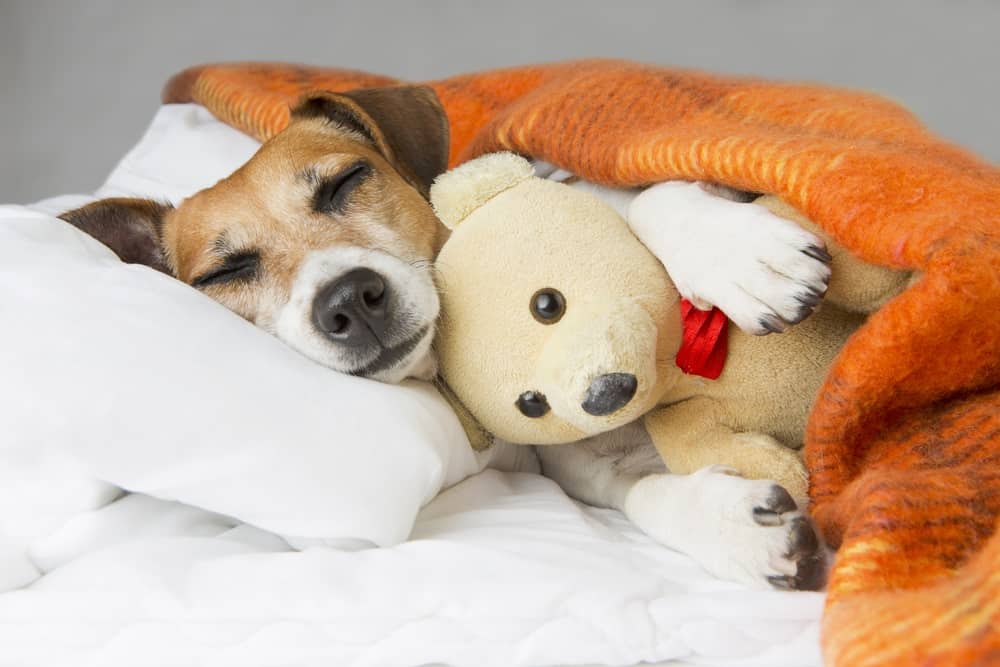 There are a lot of things going on while we sleep and the same applies to your dog. This is why you always hear the saying that sleep is very important for our health.

When living things sleep, the body will take this downtime to repair itself and grow.

And when I talk about your dog’s eyes rolling back, I do not mean that the eyeballs are pointing toward your dog’s brain. It is more up a slight upward movement.

To further understand this occurrence of your dog’s eyes rolling back, we will need to take a closer look at what happens when it sleeps.

Dogs need about 11 hours of sleep on average. Some claim that dogs tend to be active in the mornings and evenings. But as social animals, their body clocks will start to adjust to that of their owner.

When a dog sleeps, it goes through a sleep cycle that lasts about 45 minutes. During this cycle, the dog will go through two phases.

This happens during the first 10-20 minutes of your dog’s sleep. Your dog is still in a light sleep and can be roused by sounds. Your dog will also be breathing deeply and steadily.

Even though your dog might seem that it is sound asleep, it will be up in a jiffy if you tempt your dog with its favorite treat.

Many of us are familiar with REM, not the band, but the sleep phase where we tend to dream and consolidate our memories for the day.

Your dog can even start to dream with can be accompanied by vocalization and jerky movements. There are some dogs that can even get a wet dream during this sleep phase.

Nothing like finding your dog’s ejaculate all over its bed to start the day.

During REM, your dog’s eyeball will be bouncing all over the place like a ping pong ball on steroids. It can be rather scary to see this ‘strange eye movement’ if your dog’s eyelids are slightly open.

There are times when REM can make it seem like your dog’s eyes have rolled back due to the rapid movements.

Another reason that is causing your dog’s eyes to roll back when it sleep is called the Bell’s phenomenon. This reflex action was discovered by Charles Bell in 1823 which causes our eyeballs to roll upwards when we close our eyelids forcefully or passively (when we sleep).

The same applies to your dog’s eyes too when it sleeps. The reason for this upward movement is to protect the cornea from direct injury.

Your dog’s body has its own natural defense mechanism even while your dog is sleeping.

In some religions, there is a belief that some people are born with an invisible ‘third eye’ on their forehead. This allows them to see supernatural activity around them.

Definitely not to be mistaken with the third eyelid of your dog which acts more like a protective shield and eyeball cleaner.

The third eyelid is also known as the nictitating membrane and it is found between the cornea and lower eyelid in each of your dog’s eyes.

This membrane is responsible for distributing tears to clean the dog’s eyes and protect the eyes from injury when the dog is walking through grass or debris.

And if you are able to lift up the eyelid of your sleeping dog, the third eyelid could even be covering the whole eye. Furthermore, the third eyelid is almost white in color which makes it seem that your dog’s eyes have rolled back.

It is also common to see your dog’s third eyelid when it first wakes up. It looks rather creepy as it makes my dog look like a lizard.

Word of caution: Do not try this if your dog hates being disturbed when it is sleeping. You might get bitten. My uncle still has his childhood scars courtesy of his first family dog. He tried to play with the dog while it was sleeping and got bitten on the wrist.

Is My Dog Having A Seizure In Its Sleep?

Seizures are uncontrollable movements that your dog can experience when it is awake or asleep. Seizures in dogs can be caused by:

To many dog owners, a seizure can resemble the REM sleep phase of the dog. The dog will be jerking controllably and might even have its eyes rolled back.

One way to tell the difference is the intensity of the dog’s movements. A dog that is having a seizure while sleeping will be making stiffer and more aggressive movements. It might also pee or poo unknowingly which doesn’t happen to dogs that are dreaming.

Your dog can start getting seizures from as young as six months old or much later in your dog’s life at six years of age.

What Should I Do If My Sleeping Dog Is Having A Seizure?

First of all, don’t panic if your dog is having a seizure. You can’t really wake your dog up until the seizure ends. What you can do is prevent your dog from falling off the bed or hurting itself from its violent movements.

Dogs aren’t able to swallow their tongues during a seizure, unlike humans. So you don’t have to stick your hand in your dog’s mouth and risk getting bitten.

If this is the first time that your dog is having a seizure, you need to take it to the vet for a check-up to find out what the root cause is. Seizures can be better managed with the right medication.

Why Do Dogs Sleep With Their Eyes Open?

As weird as it might sound, dogs can actually sleep with their eyes open. Some dogs do it as a way to thwart predators by making it seem that the dog is still alert.

The dog can have one eye or both eyes open when it is doing this.

Based on my observation, this sleeping with eyes open usually happens during light sleep. This means that even though my dog is sleeping, he is still very aware of what is happening around him.

Once he enters REM, it feels like I’m trying to wake up a big rock at times.

Having its third eyelid exposed while your dog is sleeping could also make it look like it is wide awake.

These days, our well taken care dogs no longer have to worry about being attacked by predators while they are sleeping. Sleeping with its eyes open helps your dog keep an eye out when you are going to the kitchen for food.

Why Is My Dog’s Eyes Rolling Back All Of A Sudden?

If you notice that your dog’s eyes have rolled back while it is still wide awake, that is definitely abnormal eye movement. It is possible to have one or both eyes roll back at the same time.

The common causes of such unusual eye movements are:

Anything that can affect your dog’s eye movement is a reason to be concerned. You need to take your dog to the vet quickly for medical treatment.

Some of the above causes can be life-threatening without prompt medical attention.