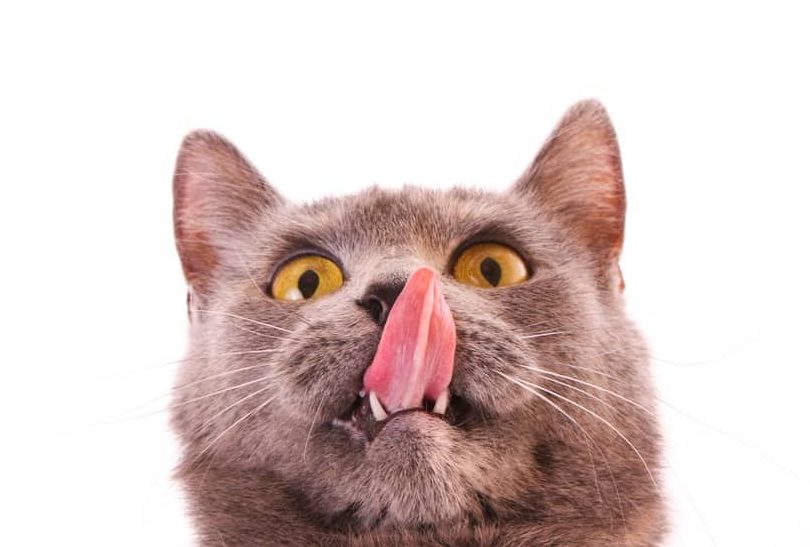 Call me a paranoid cat owner but I am always on the lookout for signs that my cat might be in pain or discomfort. Just a couple of days ago, my cat set off emergency bells in my head when I heard him yowling outside my room for no rhyme or reason.

There are some cat owners who reported that their cats have started lip-licking and shaking their heads. Why would some cats do this?

When cats start head shaking and licking their lips, such a condition is usually caused by an underlying medical problem. It could be due to an ear infection, dental disease or something even more sinister like a neurological disorder.

I will cover as many possible symptoms that can cause your cat to behave this way. Sometimes, you might notice head shaking without the lip licking and vice versa as well. 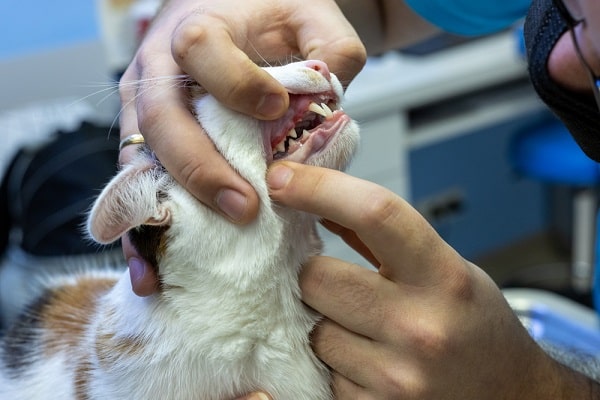 Be honest, when was the last time you brushed your cat’s teeth? The answers I’ve gotten from my reader range from ‘never to I can’t remember’.

Just because your cat isn’t human doesn’t exclude it from having good dental hygiene practices.

Studies have shown that up to 90% of cats aged four or older suffer from some type of dental disease.

These are the most common types of dental issues found in cats:

A cat that has gingivitis will have swelling and redness on the gums around the teeth. This is usually caused by the build-up of plaque which encourages the growth of bacteria.

Cats with autoimmune diseases like FeLV or FIV are also at high risk of getting gingivitis. I know this first hand because my cat FeLV since he was a kitten and had terrible gingivitis.

The only way to stop the spread was to extract most of his teeth. It was a difficult call to make but he’s been doing well with one front tooth which makes him look like a pirate

The inflamed gums is usually a sign of your cat’s immune system trying to fight off the bacteria.

This condition is painful for cats and can affect their appetite or cause them to stop eating altogether.

The next stage after gingivitis is periodontitis. The bacteria will start to attack and weaken the joint that attaches the tooth to the gums.

This condition isn’t reversible which is why you need to keep your cat’s gingivitis under control.

This condition refers to the breaking down of your cat’s teeth from the outside. The cat’s body starts to destroy the tooth’s hard outer layer which causes it to loosen. Middle age to older cats are more prone to getting tooth resorption.

It can be a tricky problem to diagnose as it usually starts below the gumline.

Symptoms Of Dental Disease In Cats

There are a few ways to tell when your cat is having a dental problem. When you take a look at your cat’s mouth and notice redness and swelling along the gumline, that is already a sign of gingivitis.

Some cats will also be constantly licking their lips and pawing at their mouths due to the pain and discomfort.

If your cat is shaking its head when eating, that is also a clear symptom of a dental problem.

Prevention is definitely better than cure when it comes to preventing dental diseases in cats. Brushing your cat’s teeth on a regular basis is a good way to keep such problems at bay.

In the event that your cat is already having dental problems, you need to set an appointment with the vet to have your cat’s teeth checked.

The herpes virus isn’t just exclusive to humans, our cats can get it too and it is very contagious amongst felines.

The feline herpesvirus (FHV/FHV-1) is a major cause of many upper respiratory problems in cats.

The most common methods of infection are:

This virus is easily spread via the bodily fluids of a cat like its saliva, nasal droplets and excrements.

Once infected, the cat can be a lifelong carrier without showing signs of the virus. Sicker cats or cats with a weaker immune system can have a herpes outbreak and shed the virus to other cats.

The common symptoms of feline herpes:

Cats with feline herpes can have sores on their lips, nose and mouth. This can cause some pain and discomfort to that area.

If you notice your cat licking its lips excessively, shaking its head and having weird-looking sores on its face, please take it to the vet right away for a blood test.

There isn’t a cure for feline herpes and the best way to prevent it is to get your cat vaccinated as soon as possible.

If your cat already has feline herpes, there are medications and ointments that can help manage the symptoms.

For cat lovers out there who have cats with herpes, the best way to stop them from having outbreaks is to boost their immune system.

Make sure that you are feeding them a good quality diet like good canned food or a raw meat diet. Stop feeding your cat dry food or kibbles as they contain a lot of bad ingredients.

Cats with feline hyperesthesia syndrome tend to display acute sensitivity at certain parts of their bodies. These areas usually happen at the base of the tail or on the back.

One way to know if your cat has hyperesthesia is to gauge your cat’s reaction when you pet it in these areas.

If it reacts weirdly, aggressively or starts to excessively scratch at that area, your cat might be having this syndrome.

A cat trying to catch its own tail might be hilarious to look at but it is also one sign that your cat might have hyperesthesia.

The cause of such a condition is still uncertain. Some doctors claim that it could be due to a neurological disorder while others say that it’s a form of feline seizure.

Although hyperesthesia is said to affect the tail and back of cats, there are some cat owners who have also reported signs of lip licking and head shaking from their cats.

There isn’t a known cure for this condition for now but there are medications available that can help to better manage the symptoms.

It is best to speak to your vet to try and ascertain the root cause of the problem and take it from there. 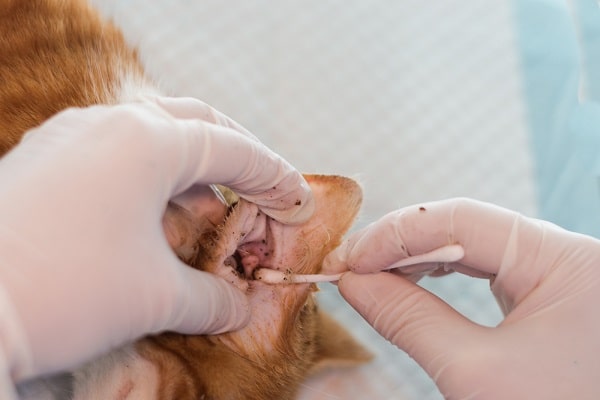 Some cats are lucky to not have a single ear infection in their lives, some are plagued with this problem, like my cat.

Ear infections in your cat can be caused by yeast, ear mites, food allergies, excessive ear wax or bacteria. The best way to know the root cause is to get your cat to the vet and get its ear closely examined.

The vet will take a sample of the ear wax and run it under a microscope to identify the root cause.

Here are some symptoms of a ear infection in cats:

The easiest way for me to tell when my cat’s ears are eating up is the constant head shaking and a bad wet smell emitting from his ears.

I have to regularly clean out his ears as his body just produces a lot of wax that can cause an inner ear infection.

Treatment For Ear Infection In Cats

Once the vet has ascertained the cause of the infection, the doctor will do a thorough cleaning of your cat’s ear.

You will most probably have to continue cleaning and applying ear drops to your cat’s ears over the next few days.

A liver shunt is a liver disease that can happen in your cat and it is considered a birth defect. This condition causes the cat’s fresh blood supply to bypass the liver and carry the blood around the liver instead.

This would mean that the cat is absorbing the toxins back into its body which is very dangerous.

The common symptoms of liver shunt in cats are:

These symptoms are rather similar to many other health issues that a cat can have. The best way to diagnose this problem is to do a variety of tests like scans and MRIs.

Treatment For Liver Shunt In Cats

Most vets will recommend surgery to try and rectify the situation. But if surgery isn’t an option then some changes will have to be made to the cat’s diet.

Some medication and antibiotics will also be prescribed for the cat.