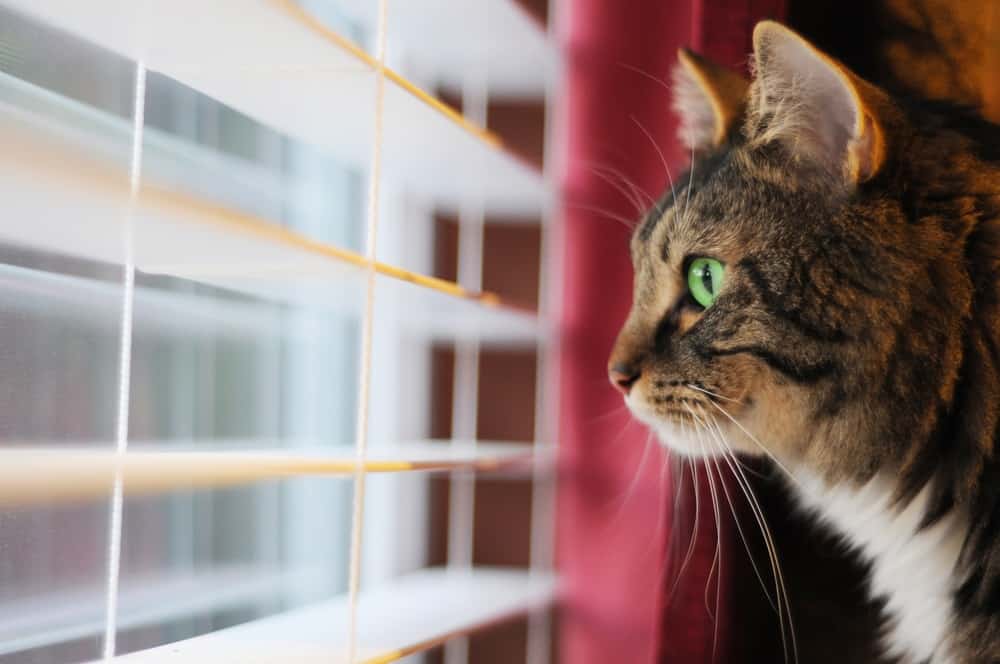 My next-door neighbor has a tuxedo cat called ‘Braveheart’. You might be thinking that he got his name from the owner’s favorite movie. Not entirely true. The owner felt the name was appropriate because this cat had no fear of the outdoors.

He would roam far and wide without apprehension. I have also seen him trying to irritate the neighbor’s dogs. All was good until I stopped seeing Braveheart for a few weeks. I bumped into the owner and asked her if everything ok with her cat. It seems that Braveheart is now extremely afraid to step out of the house all of a sudden.

Do you have a cat that is afraid to go outside out of the blue as well? Some cats can start to fear the outside world after getting into a traumatic experience. It could be dear to being attacked by another animal or getting into an accident that almost cost the cat its life. It has now developed a strong negative association with the outdoors.

Cats are very sensitive creatures and the smallest of things like loud noises can spook them rather badly at times. Let us take a look at some of the possible reasons that are causing your cat to be afraid to go outside.

There’s A New Cat In Town

Do you know that studies have soon that some cats who live with other cats tend to feel more stress and anxiety?

In general, cats just don’t get along with each other as amicably as dogs do due to their solitary nature. They just prefer being alone most of the time.

The presence of a new cat outdoors might be enough to spook your cat into staying indoors. This can be a new cat your neighbor just adopted or roaming feral cats who are aggressive towards other cats.

Cats are very territorial in nature and will not hesitate to attack a trespasser.

Your cat doesn’t even have to meet the new cat face to face to be anxious. Just the smell of the other cat’s spray or natural scent is enough to let your cat know that trouble is near and it is better to stay indoors.

Chased By A Dog 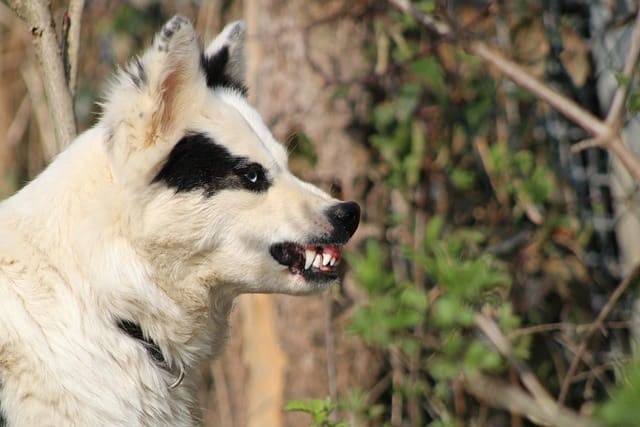 My dog and cat get along perfectly fine and they love each other’s company. You too might have an indoor cat that has a dog as a buddy but we have to realize that not all dogs are friendly toward cats.

All cats have a strong prey drive and so do dogs. Dogs that are bred to hunt have an even stronger prey drive.

Cats are generally smaller than dogs and are seen as prey to dogs. Even though dogs don’t prey on cats for food, they will not hesitate to give chase and attack the cat.

More than half the population in the US owns a dog. The chances of your cat running into a dog as it roams around the neighborhood is very high.

Not every dog will be friendly or neutral towards your cat. It might been have spooked or even chased by an unleashed dog and that got it very afraid to go outside.

Almost Got Into An Accident 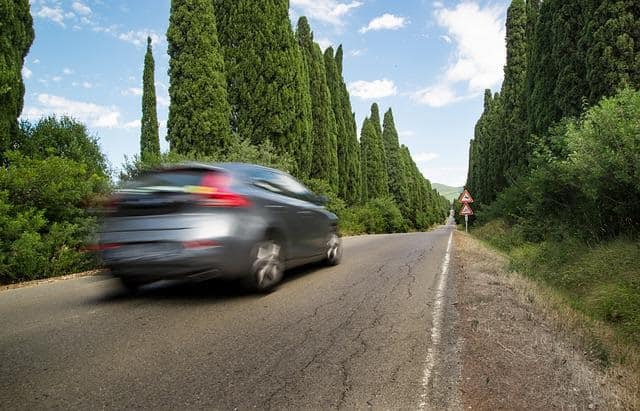 I’ve lost count of the number of times that I’ve almost hit a cat crossing or dashing across the road in my neighborhood.

And this is already coming from someone who is always on the lookout for cats and other animals while driving on narrow streets.

Someone who isn’t, wouldn’t be bothered to be cautious.

I’m not implying that cats can’t cross a road but they do tend to wait until the last minute before darting out and that is really risky.

I’ve also had to jam on my breaks because 2 cats were chasing each other all over the street at night not giving a single hoot about oncoming traffic.

If your cat is an indoor/outdoor cat, crossing the road might not be your cat’s forte. It might have had a close call with a motor vehicle or got horned at really badly.

The Presence Of Predators 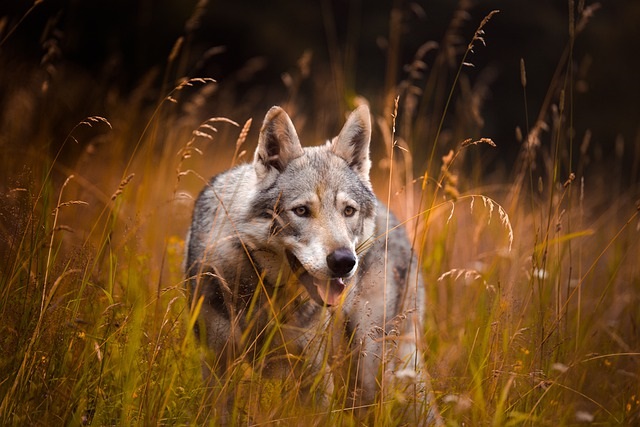 Depending on where you live, dangerous animals are always roaming outside looking for their next meal.

Our cats are apex predators in their own weight class but definitely not in the animal kingdom. There are many other bigger predators that can prey on cats as food.

In my old neighborhood where I used to live, there were many big foxes that always loitered into our backyards looking for food.

You won’t see cats out and about when these foxes are close. The cats can smell and sense their presence and would rather be safe inside the house.

Not only are cats preyed upon at ground level, they also need to be wary of what’s flying above them. Birds of prey like hawks, owls, eagles and falcons can easily swoop them and fly off with a small cat in their strong talons.

This is why many cats are afraid of balloons floating above them as it resembles an attacking aerial predator.

Even if the cat is too big for the bird, these birds can do serious damage to the cat with their powerful beaks and claws when they dive down to attack the cat.

Every time your cat steps out from the safety of your home, it is at risk of being on the menu of another predator.

If you stay near a forested area, the chances of bigger wild animals venturing near your home to seek out food will be higher.

It could be that your cat had the unfortunate luck of encountering a predator but managed to flee to safety before it was harmed.

It Is Too Cold 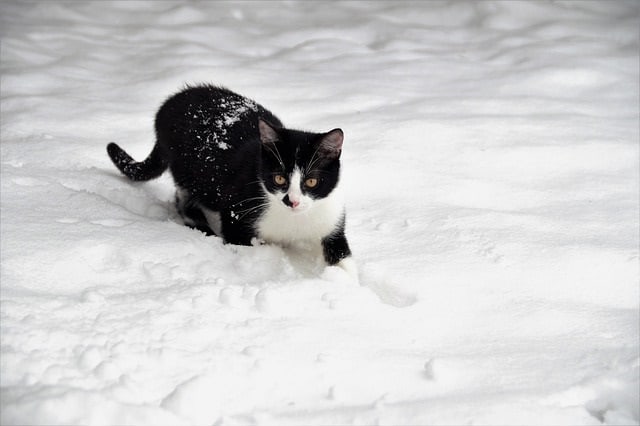 If you are letting your cats out when the weather is cold and chilly, stop. The cat’s body temperature at rest is a lot higher than a human’s.

It ranges from 100-102.5 F which means that your cat needs more heat to keep themselves warm and maintain their body temperature.

Why do you think your cat likes lying in the sun, near the fireplace or using you as a human blanket at night?

It’s because you radiate heat.

Your cat might be reluctant to go outside recently because the weather has taken a turn for the worse.

Snow on the ground can make it more uncomfortable for your cat given how sensitive their paws are. A cat’s paw is sensitive enough to detect a one-degree change in surface temperature.

Imagine how painful it must be for your cat to be walking on snow or icy ground.

Nervous About A New Neighborhood

Cats are creatures of habit and structure. If you have recently moved house, it can be rather confusing and scary for your cat to be in a totally new environment.

Cats familiarize themselves with their surroundings by marking their own scent on things. When you see your cat scratching or rubbing its face against something, it is in fact trying to leave its scent there.

A scent mark allows the cat to feel comfortable knowing that it has secured the area and it is safe.

If your cat was comfortable being outdoors in your old home, you can’t expect your cat to behave the same way for now.

According to the Norwegian University of Life Sciences, a study was done on 92 pet cats with outdoor access. The study showed that most cats only wandered no further than 50 meters from their home 79% of the time.

Even though the majority of cats don’t wander far away from home, they can be very cautious when exploring the new outdoors.

It can take a while for your cat to feel normal and safe outside of its comfort zone.

Your Cat Is An Indoor Cat At Heart 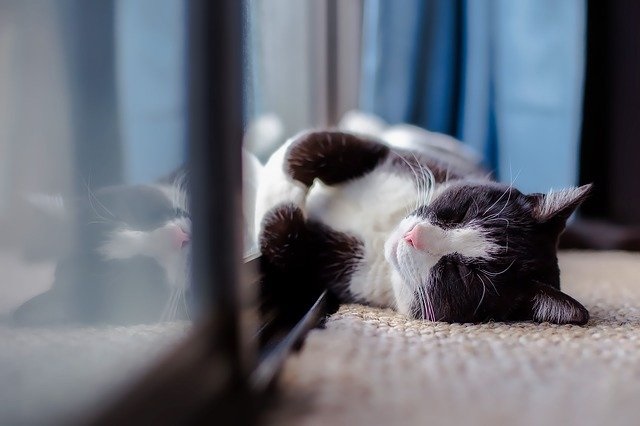 Last but not least, some cats just don’t like being an outdoor cat. Your cat’s personality has dictated that it becomes a true blue indoor cat where food, shelter and comfort are readily available.

Is your cat acting weird when you try to carry it outside the house?

The thought of stepping outside into the unknown with many weird sounds and smells isn’t very appealing.

Home is where your cat’s heart is. This is especially so if your cat has been an indoor cat for most its life.

How To Make Your Cat Scared To Go Outside?

There isn’t an appropriate way of making your cat afraid to go outside. Your cat isn’t a human child that you can try and talk sense into.

Our feline friends tend to operate more on their natural instincts and impulses.

Please do not traumatize your cat on purpose to make it afraid of the outdoors. Such scare tactics can give backfire and give your cat post traumatic stress disorder instead.

If you prefer that your cat spends more time indoors, you can try to do so by making it more comfortable and interesting to be at home.

For cats that love elevated places, have a tall cat tree that your cat can spend time on instead of on the trees outside.

Have interesting interactive toys placed all over the house to keep your cat mentally stimulated. Some cats prefer the outdoors because it can satisfy their curious nature to investigate new things.

If that’s the case, get your cat accustomed to proper leash training and supervise its time outdoors. Make sure that you are aware of what your cat is doing at all times.

Bring the outdoors to your cat instead of the other way around.

Should I Force My Cat To Go Outside?

I know of many cat owners who feel that their cats need to be outside. Truth be told, there isn’t a necessity for your cat to be outdoors at all. My cat has been an indoor cat for the last fourteen years and loving every minute of it.

Never once have I seen him stand and meow at the door wanting to get out.

You might say that your fat used to be a stray or feral and can’t be indoors all the time. I have so many friends that have adopted such cats and they no longer have the desire to roam outside after some conditioning.

Our cats have only ‘nine lives’, let us put them to good use as much as possible.