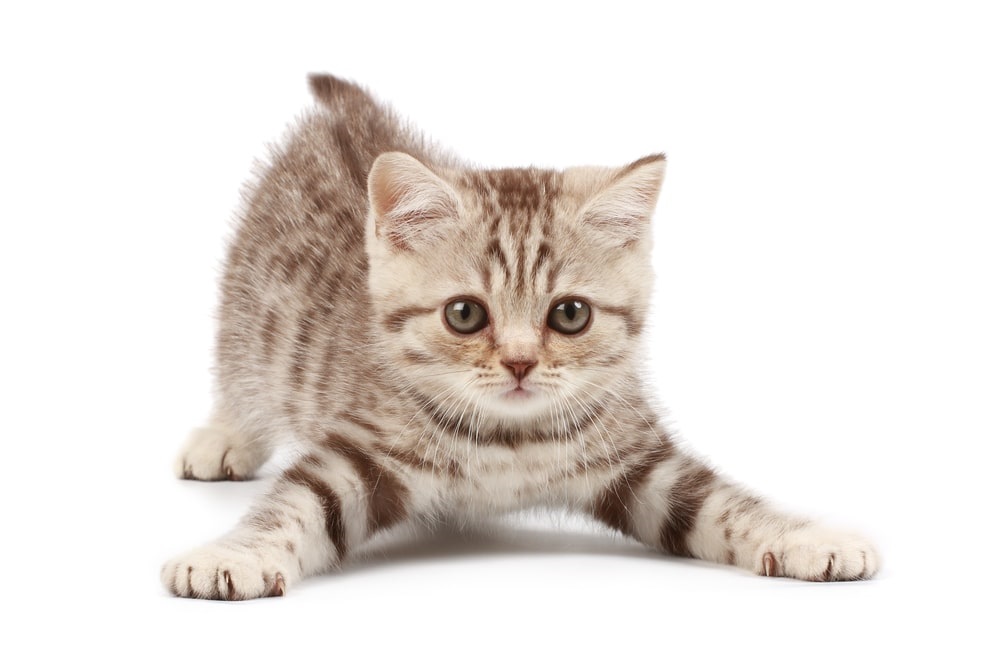 You can hear your cat growling, meowing, hissing and chattering in the living room while you were in the kitchen. Thinking that it might be in some kind of trouble, you dropped everything and ran to see what’s wrong. To your surprise, all you could see is a wildly spinning cat that’s trying to chase its own tail.

Yes, our cats are capable of chasing their own tails too, just like dogs.

Even though it can be hilarious seeing your poor cat indulge in an afternoon of tail chasing, why do cats do it?

Is it simply due to the cat being goofy like how we were intrigued by our own shadow as kids? Or is there a more serious underlying medical condition?

Do Cats Know That Their Tail Is Theirs?

Yes they do. A cat’s tail isn’t controlled independently by a second brain.

10% of the cat’s bones are in its tail and it consists of muscles, nerves and tendons.

Young kittens might not be too aware of their tail compared to adult cats as their mind-muscle connection is not as developed as older cats.

Why Do Cats Chase Their Tails?

Cats are naturally playful and curious creatures. Hence the saying ‘curiosity killed the cat’. Thankfully, when it comes to the hobby of playful tail chasing, it is safe for our cats.

It is one of the many weird behaviors that cats do which we find rather amusing and adorable.

As a general rule of thumb, the younger they are, the more playful and goofy they can get. You’ll find kittens or young cats doing this more often this adult cats.

To a kitten, it sees its tail as a built-in toy. Coupled with the fact the kittens like chasing things, this is the perfect recipe for some hilarious tail chasing sessions.

Adult cats do indulge in some form of tail chasing every now and then out of boredom but it is only for a brief moment before they get bored of it.

You don’t have to worry if you see your cat chasing its own tail playfully. It is a form of self-entertainment and they will snap out of it after a while. Some cats can get so caught up in this activity that these cats start huffing and puffing from exertion.

However, if you see your cat getting too carried away chasing its tail, you can try to distract it with a toy like a feather wand or laser pointers to break its focus.

It Is Instinctive For Cats

Cats are natural-born hunters and love to stalk, hunt and play with the prey before killing and eating it. Therefore for indoor cats who don’t have to hunt for their food like outdoor cats, anything that moves like prey will pique their curiosity.

Try making your finger move like a lizard in front of your cat and you’ll know what I mean. On second thoughts, maybe don’t.

For a kitten that’s new to the world, it will be trying to instinctively hone its hunting skills by chasing its own tail or another cat’s tail. It might not realise that the tail is part of its body hence the young cat must be wondering why is there something always moving behind me.

An adult cat will usually be chasing other objects that move like its owner’s ankles when walking.

Stress can make a cat do funny things.

When a cat is stressed it can groom excessively, do its business outside of the litter box, chew at your plants and chase its own tail.

A cat can get stress due to a number of factors:

A cat that has suddenly started this tail chasing behavior when stressed use this activity as a coping mechanism. The same goes for some humans who start to pluck their own eyebrows or hair when under stress.

Tail chasing by itself isn’t a sign of a cat who is stressed. You should also look out for any other abnormal behaviors that your cat is doing.

If possible, try to remove the stress factor away from the cat. If that is not possible, speak to your vet to see what can be done to reduce your cat’s stress and to stop the poor cat from chasing its own tail.

Cats can get the same type of allergies as humans. This allergy can be brought about by its environment or the food that your cat is eating.

When your cat is having an allergic episode, it can be suffering from skin itchiness and discomfort. If the itch is coming from the cat’s tail, the cat will start to chase and bite it to alleviate the discomfort.

Sometimes it can be difficult to ascertain what specific allergen is.

If you notice that your cat chases its tail after eating, it could be due to food allergies.

Try observing your cat’s body language closely to see what might be causing his allergic reaction at home.

Don’t forget to take your cat to the vet for bloodwork and medication to help with the symptoms.

A cat chasing its own tail could be due to a flea infestation.

During an infestation, the adult fleas usually like to build their nest at the bottom of your cat’s tail area. That area can get inflamed and itchy when they bite your cat hence making the cat chase its own tail.

You can try to spot for fleas on your cat by splitting its fur near the tail area to look for any tiny black specks that are moving.

You will need to bring your cat to the vet asap to resolve the flea problem.

Outdoor cats are more prone to catching fleas but indoor cats can get it too if the fleas are stuck on your clothing or on another pet that has outdoor access.

This is a rather rare nerve disorder that causes some parts of the poor cat’s skin to be ultra-sensitive and cause a tingling sensation. These sensitive spots are usually at the back and in the front area of its tail.

It can cause itching and cats will chase their tails to try and bite the itch. Other symptoms include running and loudly meowing around the house for a brief period.

Cats with this disorder will start to exhibit symptoms between 1-5 years of age.

You will need to bring your cat to see the vet for medication to help manage the symptoms.

Stud tail or medically known as Supracaudal Gland Hyperplasia, is a condition whereby the cat has excessive oil production at the base of its tail.

This condition is more common in cats that are not sterilized.

Sebum or skin oil is needed to keep the cat’s fur healthy and well-conditioned. But when there is too much of it, it can cause that area to be itchy and causes tail chasing in cats.

You can notice this issue if the area at the bottom of your cat’s tail is often matted or discolored. This condition can also make your cat groom its tail area excessively and cause hair loss at the base of its tail.

If your cat has an infection on its tail, it can cause a certain amount of discomfort or itching. Your cat will try and chase its tail to bite and lick the infected area.

A visit to the vet is necessary to clear up the infection.

What Does It Mean When A Cat Chases Its Tail?

There can be a wide variety of reasons as to why do cats chase their tails. This can range from a cat being playing to other health issues like stud tail, flea infections or stress. It is important to note how often is your cat chasing its tail and whether is it aggressively biting its tail.

If your cat is chasing its tail out of playfulness then it would be best to sit back, smile and enjoy the silly show.