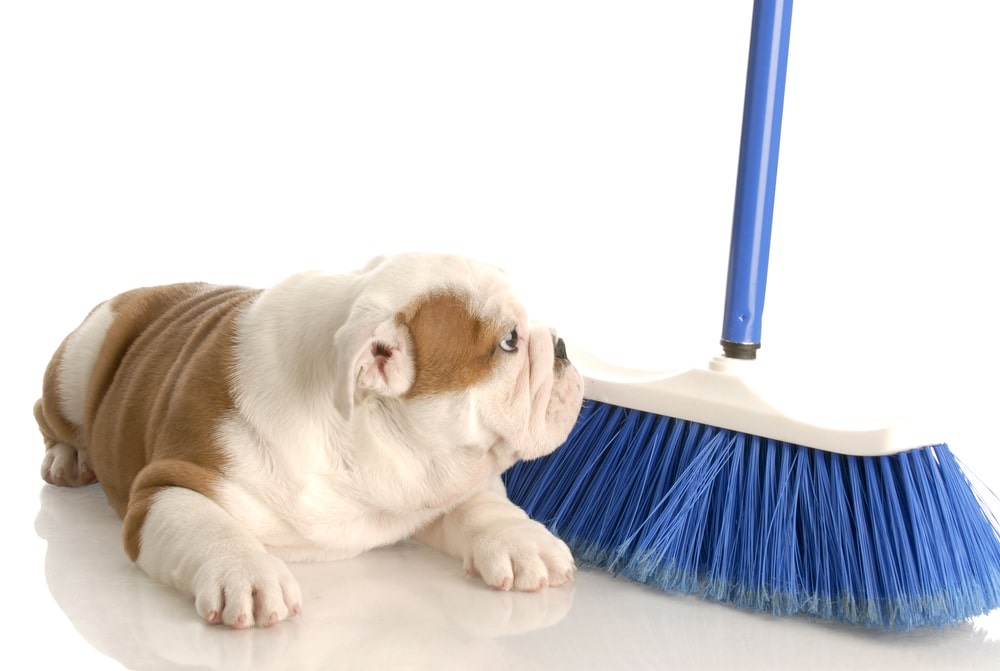 Do you know what has to be one of the weirdest phobias ever? Optophobia. It means the fear of opening one’s eyes. That has to be quite an inconvenience.

Dogs too can have phobias or an irrational fear of something. But why are dogs scared of brooms?

Some dogs are afraid of brooms as they do not understand what the object is and the sound it makes. This can cause the dog to react out of uncertainty. Dogs that have been abused with brooms before can exhibit PTSD symptoms upon seeing a broom.

It isn’t always a clear-cut issue when a dog reacts fearfully or aggressively towards a broom. In this article, we will be sharing some possible reasons that might shed some light on your dog’s behavior.

Socialization is a very important aspect of pet ownership. This doesn’t just refer to introducing your dog to a new dog or cat.

Socialization can also refer to getting your dog comfortable with an inanimate object like a broom in this instance.

If your dog has never seen a broom before, it wouldn’t have the slightest clue as to what it is. We can’t expect our dogs to conceptualize the idea of a broom like humans but they should at least see brooms as harmless objects, like a chair or table.

Imagine yourself encountering a broom from your dog’s perspective.

You aren’t the biggest or the tallest creature in the room and all of a sudden you see this long, thin and noisy contraption coming toward you.

Your keen sense of smell picks up many odors emitting from this object but its reeks of staleness and dust.

Not only does it look and smell weird but it’s also making this weird “swoosh swish” sound that is starting to grate on your nerves.

Back to being a human now.

Since it is within our primal instinct to fight or flight in the presence of uncertainty and danger, your dog might be feeling the same thing.

The unfamiliar sight and sound of the broom are starting to make your dog scared and anxious. Many dogs respond to these emotions by: 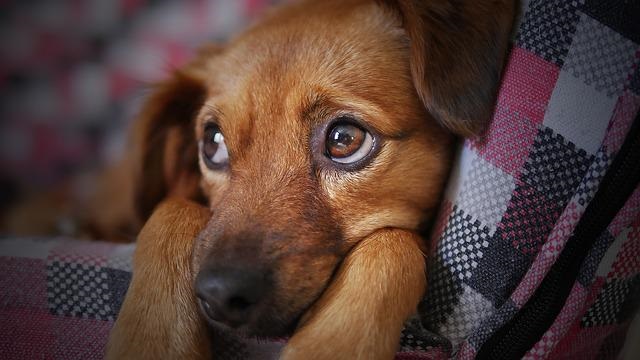 Puppies tend to be more fearful and cautious of unknown objects. Being so tiny and new to the world, their natural defense mechanism is to start overreacting when encountering a broom.

Some puppies may grow out of this ‘the world is my nemesis phase as they get older. However, dog owners should start building up their puppies’ confidence as early as possible to prevent any behavioral issues as they older.

A little german shepherd puppy trying to ‘attack’ something or someone out of fear is adorable.

Adults that have experienced abuse when young, gone through a very traumatic period or have been involved in a serious accident can have PTSD.

It is an unfortunate thing to have and our dogs can have it too.

Dogs that have PTSD can exhibit the following symptoms:

Dogs or cats suffering from PTSD usually have a specific trigger that can set them off. Otherwise, they will seem fine most of the time.

If you have recently adopted a rescue dog that was abused by its previous with a stick or broom, the sight or sound of a broom can trigger its PTSD.

It might not even be due to abuse that is causing your dog’s PTSD. It could even be the sound that the broom makes that is making the dog associate it with some terrible incident in the past.

These dogs respond by acting very fearful or aggressive when triggered.

Our dogs can’t speak and to an untrained dog owner, it is easy to mistake PTSD for natural fear. One tell tale sign of dogs that have PTSD is that their behavior is more extreme than a dog that is just feeling fearful.

How To Treat PTSD In Dogs?

PTSD in dogs is a condition that needs to be treated much sooner than later as the symptoms can worsen over time. If you do suspect that your dog is suffering from PTSD, the best person to speak to will be your vet.

The vet will run a few tests on your dog to make sure that the behavior isn’t due to a health problem. Once that is settled, the vet might refer you to a pet behaviorist who is more skilled in this aspect of dog health.

Dogs that have more severe PTSD might be put on anti-anxiety medication like Trazodone, Xana or Zoloft. This can help to take the edge off while your dog undergoes behavioral therapy.

You can also help your dog by keeping it mentally and physically active. Bring it to the dog park so that it can play and interact with other dogs.

This is a lot better for your dog than sitting at home wondering when the bad bogey broom is going to reappear.

All dogs come with an instinctual prey drive. Some more, some less.

Although they aren’t excellent hunters like cats, many dogs are still pretty good at chasing small prey like rodents and squirrels. Some dogs can even extend this prey drive to chasing after cars and moving objects.

This is why playing fetch is more a dog thing than a cat’s.

Why Does My Dog Chase The Broom?

When presented with a broom, your dog won’t start thinking “Yup, it’s time for my master to give my home a good cleaning today”.

The erratic sweeping movement of the broom plus the bushy bottom will come across as a real prey worth chasing to your dog.

If your dog attacks, starts chasing after the broom or starts behaving erratically around it, something needs to be done behaving the behavior gets out of hand.

There are certain breeds of dogs that have a much stronger prey drive than the others. These are usually hunting breeds or dogs that are bred or used to chase and capture prey.

How To Tame My Dog’s Prey Drive?

If your dog starts behaving like ‘a bat out of hell’ when it sees the broom, you need to train your dog to take it down a notch or two.

First of all, prey drive is harmless. it is born out of instinct than emotions. The dog might seem aggressive but it is in fact trying to be playful or friendly.

The first thing that you need to do is to stop letting your dog use the broom as a plaything.

Command your dog to stay or leave the broom alone. Do not yell or scold your dog. Remain calm and rewards your dog’s obedience with lots of praises.

Your dog’s attention should always be on you and not on its surroundings.

Another way to curb your dog’s prey drive towards the broom is to not make jerky movements with it. If possible, make sweeping motions towards your dog.

Real prey would be running in any direction except towards the dog. This will derail your dog’s prey drive and shut down the chase behavior.

How To Stop Dog Barking At Broom?

If your dog turns into a non-stop barking machine whenever the broom is out, there are some ways that you can use to try and get your dog well socialized to the broom.

The first thing you need to do is to let your dog get accustomed to the presence of the broom. Don’t get take the broom out and start sweeping in front of your dog. That will only send its fear and anxiety levels through the roof.

Take the broom out and place it on the floor or standing up.

Let your dog approach the broom at its own will and comfort. Try sitting next to the broom to let your dog know that it is all right.

You should reach the point when your dog is comfortable just being next to the broom without showing any signs of distress.

The next part is to start making sweeping motions with the broom. Do it slowly with smooth non-jerky movements.

Always keep an eye on your dog’s body language to see how it is reacting to the broom. Once your dog starts getting agitated, take it down a notch or stop the training altogether.

Never shout or get angry with your dog. Such a gesture from you will even make your dog feel more fearful and slow down its progress.

Always be encouraging and gentle to generate lots of positive associations. Let the dog adjust to the training at its own pace.

Why Are Dogs Scared Of Brooms And Vacuums?

Based on conversations with my readers, dogs afraid of brooms tend to also be afraid of vacuums.

It was the other way round for my dog Bongo. He was really terrified of the vacuum cleaner when I first used it in front of him. He vanished from sight as fast as a cat.

I experimented with a broom and he was apprehensive but not too fearful. Bongo is a lot more tolerable towards my vacuum cleaner these days.

He will just observe from afar and try to keep his distance.

A vacuum cleaner isn’t the most pleasant sounding of devices. Even I can’t take the sound for long without feeling irritated.

I can’t imagine how old it sounds to dogs who have a much better sense of hearing than humans.

Is Your Dog Genetically A Coward?

Some scientists have claimed that it is possible for a dog to be genetically fearful. If puppies have mothers that have anxiety issues, it is possible that this trait of hers can also rub off on her litter.

Certain dog breeds like Siberian huskies and Labradors tend to be more fearful of loud noises as compared to other dog breeds.

Why Is My Dog Afraid Of The Mop?

Some dogs are afraid of the mop due to having an irrational fear of it. The erratic movement of the mop can also stimulate the prey drive in some dogs making them act erratic. Dogs that have been abused by a mop or sticks in the past might get triggered by the sight of the mop.

Why Are Dogs Scared Of Ballons?

Balloons can cause dogs to be fearful due to a few factors. Balloons are made mostly from rubber and other chemicals which give off a strong smell. These odors can be very intense to dogs and mess them up. The unpredictable movements of balloons and weird sensation of the texture can be frightening to some dogs.

It isn’t healthy for dogs to be afraid of inanimate objects like the broom. It is important for dog owners to get to the root cause of the dog’s fear and resolve it.

Dogs that are in a constant state of stress and fear can lead to health and behavioral problems in the long run. 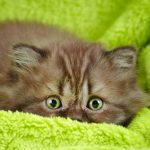 Can Cats Have PTSD? (This will surprise you) 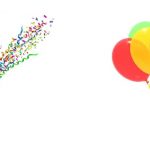 Why Are Cats Scared Of Balloons? (The Mystery Unraveled) 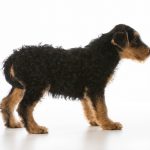 Dog Has Tail Between Legs And Acting Weird? 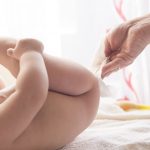 Can I Use Baby Wipes On My Cat’s Bum?