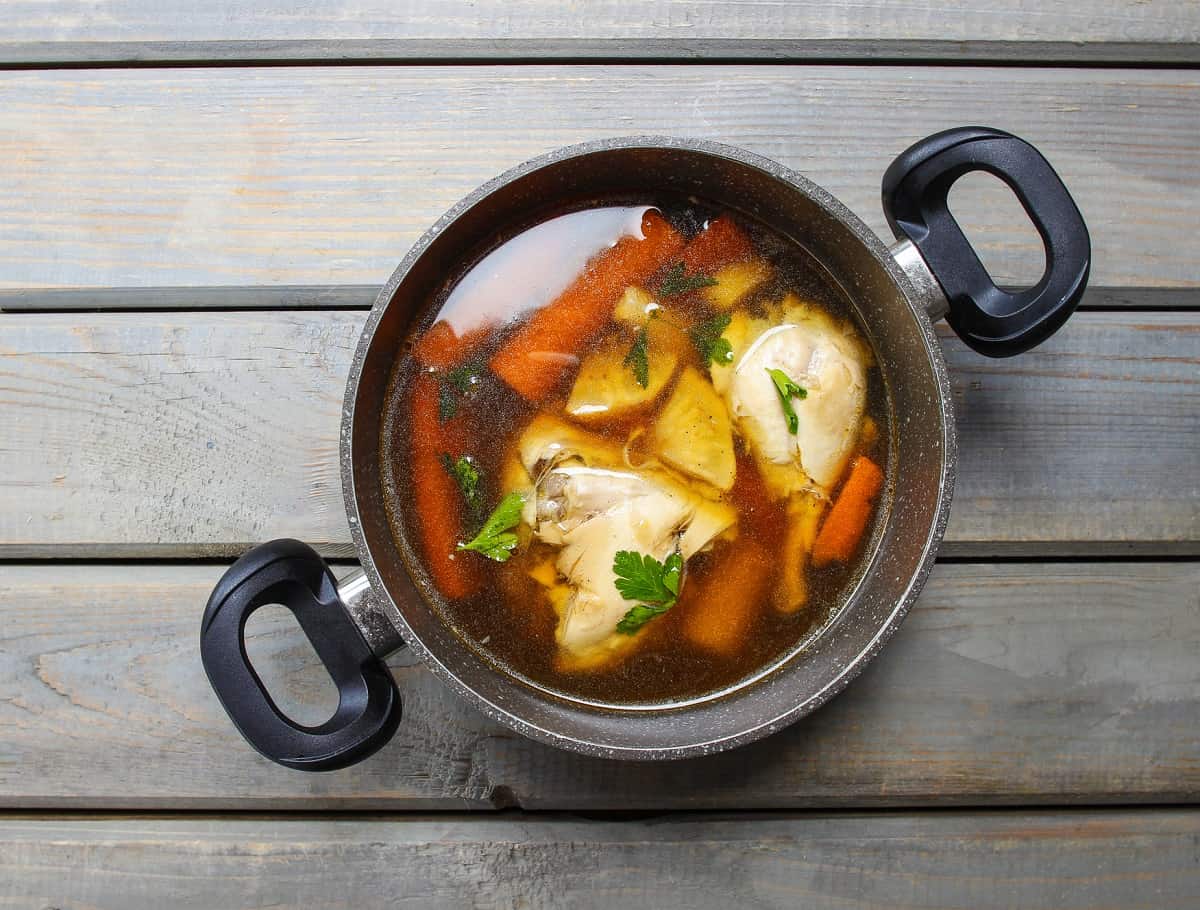 I drank it because it tasted yummy but as I got older and realized that there are actually many health benefits to chicken broth, I started making it at home for my own pets.

One common question that I frequently get from my readers is if it’s fine to soak dog food in chicken broth?

Yes, it is fine to soak your dog’s food in chicken broth. Chicken broth has some health benefits that your can dog can benefit from. Chicken broth is also good for dogs who don’t have much of an appetite, have problems eating solid food or are not feeling too well. Be careful when using commercial chicken broth as it can contain too much salt for your dog.

Let us take a look at what goes into the making of chicken broth and the pros and cons of soaking your dog’s food in it.

What Is Chicken Broth?

Chicken broth is made by boiling a pot of water with cooked or raw chicken meat and bones. The whole pot is let to simmer until the mixture is full of chicken flavor.

You can control the intensity of the flavor by the amount of time you let the pot simmer. The longer the cooking time, the more intense the flavor.

Some chicken broths have added ingredients like salt, pepper, garlic and onions for taste.

For dog owners that are too lazy to cook up some homemade chicken broth, there’s always a large range to choose from at the grocery store.

Does Chicken Broth Have Health Benefits?

The book series ‘Chicken Soup For The Soul‘ might be on to something with its title. Chicken broth not only tastes good but it also comes with its own benefits.

Some of the known health benefits are:

As you can see, not only can humans stand to gain from the above health benefits but our dogs too.

How Do I Soak My Dog’s Food In Chicken Broth? 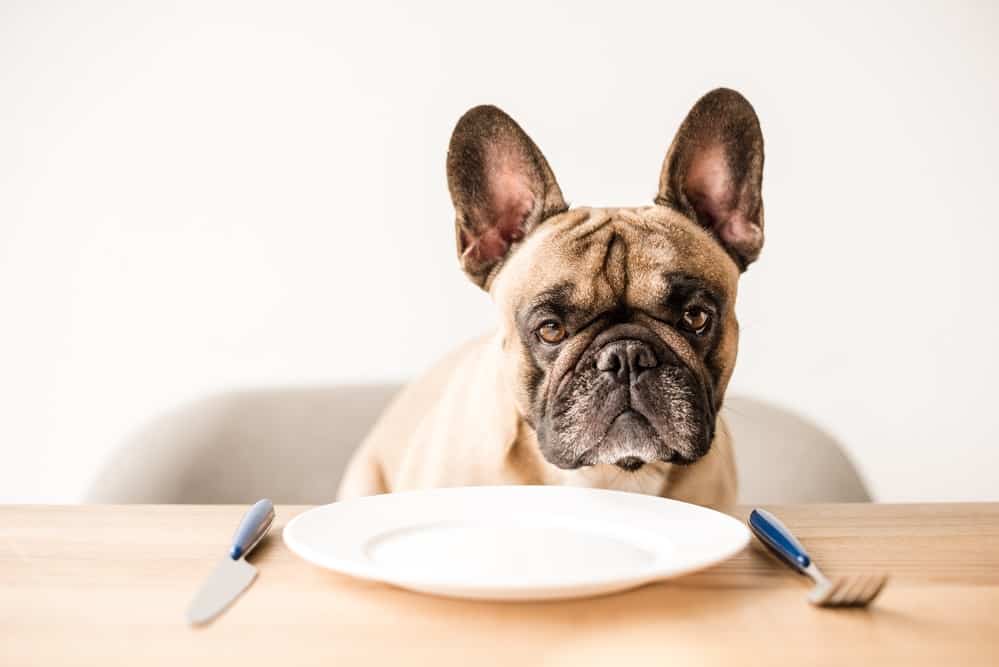 The good thing about soaking your dog’s food in chicken broth is that it applies to all types of dog food.

You can use it on dry dog food, canned food and even raw food.

However, there are a few things that you need to note for each type of diet.

Soaking a dog’s dry food in broth is commonly practiced by many dog owners. There are a few ways to go about doing this.

It depends on the kind of consistency that you want the dry food to have after mixing it with the broth.

If you want the dry dog food to be a lot softer and mushy, you will need to soak the kibbles in for quite some time. Kibbles are very dry and non-porous so they do take time to soak up moisture.

Some dog owners will soak the kibble in warm water first before adding the dogs’ chicken broth. Some will even add hot broth directly to the dry food.

I did a test on some borrowed kibbles and it took about 45 minutes to an hour to become soft. If you don’t need the kibbles soft, then just add some chicken broth and serve to your pooch.

I’m not an advocate of feeding your dog dry kibble due to the lack of moisture and nutrients but adding hot liquid to it can further destroy any added supplementation. 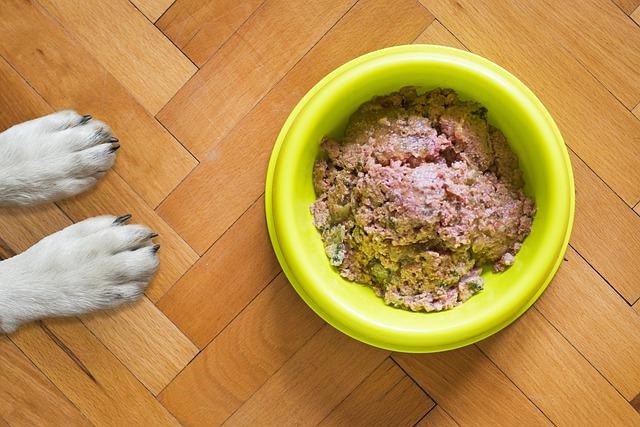 When your dog eats canned food, the contents are already rather wet. Some might even be gelatinous in nature but I don’t like feeding my pets anything that feels ‘gluey’.

Soaking wet dog food in chicken broth might make it end up looking like chicken noodle soup instead. It is too soggy and the wet food will just crumble into very small pieces.

Just make sure to not overdo it when it comes to wet dog food.

The only thing that you should not do when it comes to raw meat is to soak it in hot broth. Raw meat contains many vitamins and minerals that are heat sensitive and can be easily destroyed by the hot broth.

You can add more broth when giving your dog raw food as it holds its form well unless if it is minced meat.

How Much Chicken Broth Should I Put In My Dog’s Food?

You don’t have to drown your dog’s food in the chicken broth even if your dog loves it. Most times, I only give my dog just a few tablespoons and that is more than enough to satisfy his craving.

Too much broth in your dog’s food can fill your dog’s stomach with too much liquid and make it forgo its solid food.

When Should I Add Chicken Broth To My Dog’s Food?

Besides the above-mentioned benefits, there are some other advantages of soaking your dog’s food in chicken broth that are more ‘dog centric’.

Helps With Your Dog’s Appetite

Whenever my dog or cat is back from the vet after going through a medical procedure, I will have some homemade chicken broth on standby.

Maybe your dog has had to be out under general anesthesia for surgery and is feeling out of sorts. Or it could be that your dog has not been eating well after her pyometra surgery which isn’t good for the dog.

Based on my experience and many other dog owners, most dogs won’t have much of an appetite when they are in such a state.

They will be feeling drowsy from the anesthetic agent and can be in pain from the surgery. Many dogs will also have problems pooping after being sterilized.

By adding some chicken broth to your dog’s food, it can help whip up your dog’s appetite.

You see, the way to your dog’s stomach is usually through its nose. Animals are drawn to food that smells enticing, especially if they have a keen nose like dogs and cats.

It can encourage your dog to eat more if it smells something that can whip up its appetite.

Your Dog Has Mouth Problems

Adding chicken broth is a good way to soften dog food which makes it easier for your dog to consume.

This will come in handy if your dog is having issues eating solid food due to a mouth problem or when puppies are teething.

I wouldn’t suggest letting your dog eat dry hard food as it can only worsen its dental issues. Mixing canned food into a bowl of chicken broth until it becomes porridge-like in texture can be good for your dog.

If your dog is only keen on dry food, make sure to soak the dry food longer to really soften it up.

Your Dog Is Having A Stomach Upset

A couple of years ago, my dog come dog with bad stomach flu. He was having bad diarrhea and couldn’t keep his usual raw food down.

He had no appetite and was just feeling very lethargic.

The vet told me to not feed anything raw until his stomach has stabilized and homemade chicken broth was a good way to keep him hydrated and provide some nourishment.

So homemade dog treats and broth were all that my dog ate for a few days until his stomach got stronger and was able to properly digest solid food again.

If your dog is going through the same problem, chicken broth will be a lot easier on your dog’s stomach for the time being.

What Type Of Chicken Broths Are Safe For Dogs?

I only use homemade broth when it comes to feeding my pets. I find store-bought chicken broth too high in sodium and can also contain other ingredients like onions and garlic which are toxic to dogs.

We all need salt in our bodies to be healthy but too much for your dog can lead to salt toxicity. A dog needs about 100mg of sodium for every 100 calories of food. Salt toxicity can occur when your dog consumes 2-3g of salt per kg of body weight.

For a small dog, this can be as little as a teaspoon of salt. Larger dogs would need a couple of tablespoons to have an adverse effect.

Symptoms of salt poisoning include:

100g of chicken broth contains about 400mg of sodium and I would think many dogs are able to consume more than that amount of broth very easily.

If you do suspect that your dog has salt poisoning, please bring it to the vet immediately for medical treatment.

Added ingredients like onions and garlic are very toxic to dogs. In fact, garlic is 5x more toxic than onions when it comes to dogs.

The vegetables can destroy your dog’s red blood cells and make them a lot less effective at transporting oxygen to other parts of the body. This can cause your dog to become anemic which can be life-threatening.

Make Your Own Chicken Stock Or Broth

It isn’t hard to make your own broth. Just simmer some chicken meat and bones for about an hour in a big pot to really retract all the flavor and goodness for your dog.

You can choose to feed your dog the cooked meat but NEVER feed your dog any cooked bones. Cooked bones are very hard and can splinter very easily which can cause damage to your dog’s internal organs.

When it comes to bones, only give your dog raw bones.

Some dog owners will soak the kibbles first before feeding it to the dogs. This allows the dog’s stomach to accommodate to the soaked kibbles which are probably twice their size.

Imagine your dog eating the same volume of dry kibbles and drinking water after. That can cause the kibbles to expand crazily in the stomach and cause bloating.

Bloating is very common in large and giant dog breeds like the Great Dane. If you notice your dog has been stretching its neck and looking up, that could be a sign of bloat and it requires immediate medical attention.

One More Thing To Note When Soaking Your Dog Food

Even though there are benefits to soaking your dog’s food, the added moisture in it leaves the food more prone to contamination when left in the open.

This applies mostly to dry food that can last a few hours out in the open in its original dry form. But once soaked, I wouldn’t leave it out for more than 1.5 hours.

The same goes for canned food and raw meats.

Most dogs can eat spoilt food without getting into too much trouble due to their strong digestive systems. But puppies and senior dogs might not have a strong enough immune system to fight off foodborne illnesses.