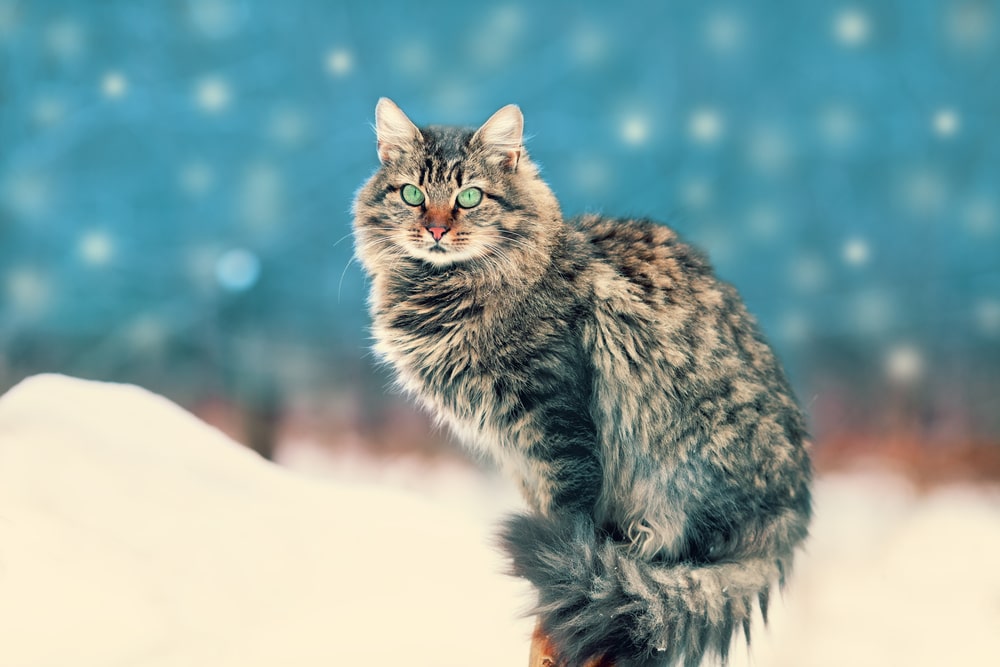 You have always wanted a Siberian cat and have decided to own one in the coming months. However, you are still undecided about getting a male vs female Siberian cat.

I know the feeling.

I had the same thoughts before adopting my own cat.

But is there really a difference between the sexes of the Siberian cat breed?

Origins Of The Siberian Cat

The name of the Siberian cat is a good clue that this cat breed originated from Russia. It is also known as the Moscow Semi-Longhair and is the national cat of Russia.

Siberian cats are also said to be closely related to Norwegian forest cats.

The first Siberian cats arrived in the United States around 1990. 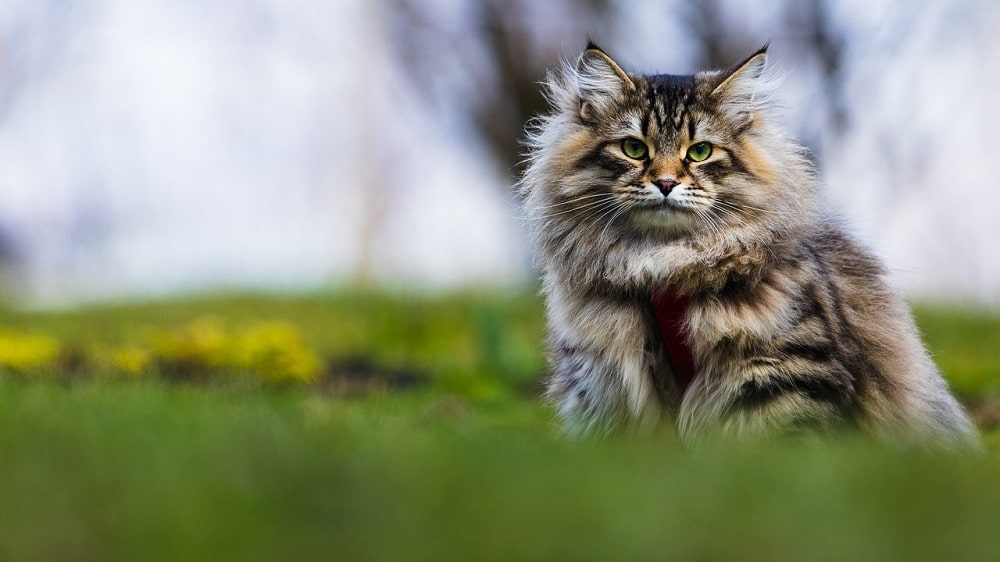 Siberian cats don’t grow as large as the Maine Coon but their medium-sized body is well muscled as compared to other cats.

This is due to the cat hailing from the harsh climate of Siberia which requires a strong body to survive. Siberia is very cold therefore the Siberian cat breed comes equipped with a long and thick coat that can allow the cat to survive the harshest of winters.

A Siberian cat has a sweet expression mainly due to its somewhat smallish face with big round eyes.

You can’t ignore the tails of Siberian cats which are usually long and fluffy.

The Siberian cat is known for its playful and charming personality. They are also drawn to water like their Maine Coon largely due to their water-resistant and thick fur which is good for wet and snowy climates.

They are also very intelligent with the ability to problem solve love being close to their family members.

Though not as vocal as the Siamese or Burmese cat breeds, they are known to be vocal rather often with chirps and chatters. So be prepared to engage in meaningful conversation with your cat from time to time.

Interestingly enough, Siberian cats like to play fetch like dogs and are great hunters. Don’t be surprised to find your cat bringing you half-eaten small prey for ‘breakfast in bed’.

Sharing is caring for the Siberian cat.

The Siberian cat breed is easy to maintain despite being a long-haired cat. However, make sure to brush your cat a few times a week to prevent matting.

On top of this, regular nail clipping and brushing your cat’s teeth are also good habits to develop.

The Siberian cat is agile and are good jumpers due to their background. It would be good if you have platforms or ledges at home for the cat to move about.

Having vertical space is also important for these cats.

Last but not least, feed your Siberian cat a good diet.

Stay away from dry food or kibbles as they can cause health issues in the long run. Stick to a raw food diet or at the very least, good quality canned food.

Cats are obligate carnivores and need a high protein diet in order to be healthy. The best protein source for cats is meat and organs. 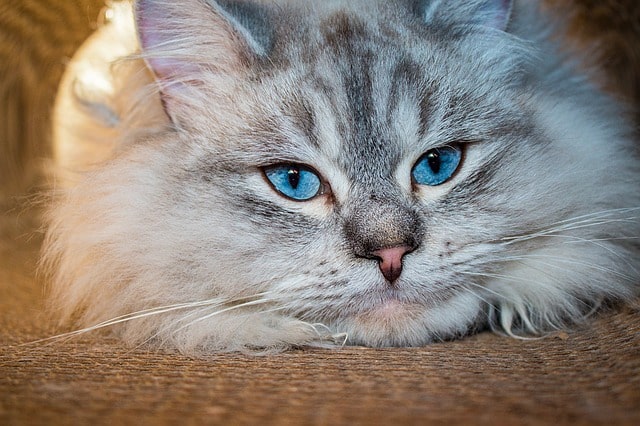 Most purebred cats have some sort of inherited medical condition that is passed down through the generations.

Some of these health issues can’t be prevented but only managed as the cat gets older.

For the Siberian cat, it is prone to the following issues:

Hypertrophic Cardiomyopathy is a heart condition that is common in many purebred cats. This happens when the cat’s heart walls get too thick to pump blood effectively around the body which can result in heart failure.

This heart ailment not only affects adults but also Siberian kittens. Therefore it is important for you to find out if your cat has this genetic defect at the vet.

Blood thinners can be prescribed by the vet to help manage it.

This ailment affects the cat’s kidneys as it gets older. The kidneys get less effective as your cat ages. Common symptoms are weight loss, increase thirst and urination.

Unfortunately, this is not something that can be prevented as its an inherited condition. However, it can be detected in Siberian kittens and managed with prescribed medication.

There are some inherent personality traits for each cat breed that makes them unique. And within each cat breed, there might also be some differences between the male and female cat.

One thing to note is that these observations are made by Siberian cat owners and might not necessarily be set in stone.

At the end of the day, each cat has its own unique personality and should be loved for what he or she is.

The males weigh a couple of ounces heavier than the females thus making them more built.

Their stronger affectionate and playful demeanor make male cats foster a stronger bond with their humans.

Male cats aren’t as wary of strangers as compared to females and will tend to welcome visitors with open paws. Even Siberian breeders tend to recommend males if you are looking for a more affectionate feline companion.

Please do not start to think of the Female Siberian Cats as cold as the climate that they hail from. The female counterparts have the capacity to be as playful and affectionate as the males but they tend to be more laid back and reserved.

They don’t really enjoy being carried and handled and prefer to bond with just one human.

Female cats tend to shy away from visitors and strangers so don’t go expecting them to be super friendly with your house guests. Female Siberian cats make good pets for someone that prefers a cat that is more independent, less needy yet affectionate.

How To Choose A Siberian Kitten

When you’re trying to decide on a Siberian kitten, it is important to know how to choose one that suits you.

When you’re at the breeder’s place, it would be good to have some time alone with the kitten in a quiet room so that you’re the main focus.

If you are on the lookout for an affectionate and playful cat, see which of these kittens gravitate towards you or start lying on your lap.

Personally, I prefer cats that are more independent and less needy. I choose the kitten that was sitting pensively on the window still while his siblings wanted to play with me.

And to this day after 14 years, he still behaves like that aloof kitten and I love him to bits.

Don’t forget to physically check the Siberian kitten for any physical injuries or abnormalities. It is also very important to ask the breeder for the kitten’s medical records to see if it has been neutered or has any existing medical conditions. 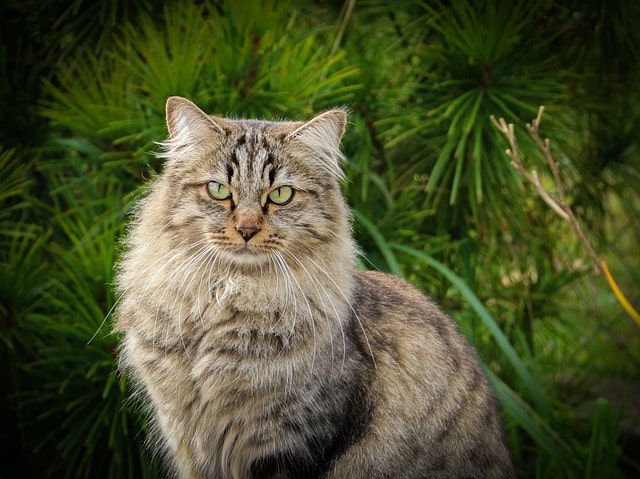 If you are anyone in your family has an allergy to cats, the Siberian cat will be the most suitable cat for you.

A person suffering from cat allergies is allergic to the allergen called ‘Fel D1‘. This protein is found in the saliva of cats which is transported to the fur when it grooms itself.

The Siberian cat produces a lot less of this protein as compared to most breeds. Do note that the cat still produces the allergen so if you have a very serious cat allergy then even a Siberian isn’t going to help.

Female Siberian cats are also known to produce a lot less of this protein than male cats. Hence make it a point to get a female if you are trying to minimize the allergic reaction to cats as much as possible.

So are male Siberian cats more affectionate than females?

However, you should not let the gender of the breed sway your decision in choosing the Siberian cat unless it’s for allergy reasons.

It is more important to observe how the cats react with you when you are interacting with them.

Most of the time, it is the cat that chooses you.

So be prepared for that.