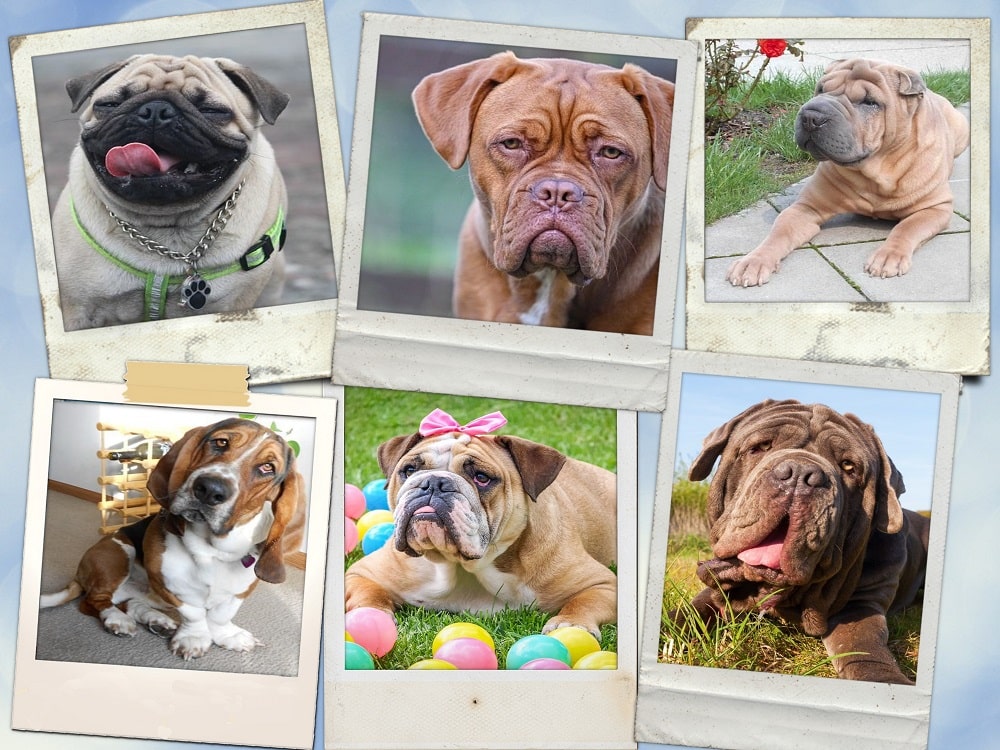 If you have ever been told that you got a face that ‘only a mother could love, I wouldn’t exactly regard it as a compliment.

When it comes to dogs, every breed has its own unique physical traits, some more than others.

In today’s article, we will be looking at 10 dog breeds whose faces are all floppy and wrinkly. If you love cuddling up with a smooshy-faced pooh, these wrinkly dog breeds will be up your alley. 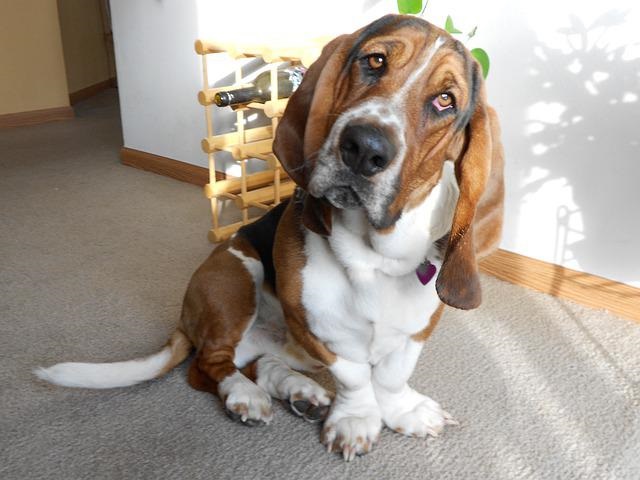 The basset hound was made to be larger than life when the Hush Puppies plush toys started growing in popularity.

It has a large head, long droopy ears, lots of floppy loose skin on its face and an elongated body.

Standing at only 14 inches tall, do not let the size of this dog fool you. It has a muscular body and massive paws which allows it to outlast much larger dog breeds in the field.

Basset hounds are bred for hunting due to their amazing sense of smell that can track down prey in hiding and on the run.

Their loose facial skin serves an important purpose when it’s tacking a scent. It helps to trap the odors and keep the smell close to the nose.

Despite a basset hound’s love for hunting, they can be lazy dogs and love nothing more than curling up in your lap all day long.

If you are looking for an obedient dog, this dog breed might not be suitable for you. Basset hounds are known to be stubborn and patience is required to let the dog know who the pack leader is.

Many dog owners will agree that the bulldog has one of the most iconic dog faces of all time. A dog breed that symbolizes tenacity and toughness.

No wonder Winston Churchill was given the moniker the ‘English Bulldog’ for his iron will during world war two.

The bulldog originates from England and was originally bred for bullbaiting and dogfighting. These were cruel exploits of the bulldog and have been banned for many years.

Besides the English bulldog, there is also the American bulldog and French bulldog.

No other dog resembles the bulldog with its saggy jowls, short muzzle, furrowed brow and deep wrinkles on its face. Some might even call the bulldog ugly.

Thankfully beauty is in the eye of the beholder.

Considered a medium-sized dog, the bulldog can weigh in at a hefty 50 lbs. It would make a good bouncer at a dog disco with its low-slung muscular body.

Similar to the basset hound, don’t expect the bulldog to come running every time you call. They are stubborn dogs and prefer to dictate their own course of action.

That being said, bulldogs make great house pets due to their loyal and affectionate nature. They are also good with kids and other pets. 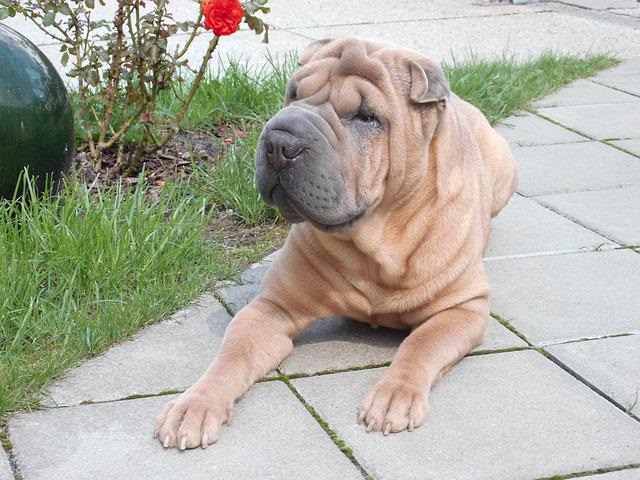 The Chinese share pei looks like a piece of cloth that has been left in the dryer for too long and needs a good ironing.

This dog breed originates from China and is considered to be a rare breed. It has been around for a long time, almost 2000 years and was bred as a hunting dog.

The shar pei’s calling card is its wrinkled skin, not just on the face but also the wrinkled skin folds all over its body.

This dog also has a very unique color for its tongue which is bluish-black. It looks like it has eaten a popsicle of that same color.

The shar pei isn’t a high-energy dog like a labrador but still requires its daily dose of exercise.

Bring stubborn and difficult to train are also part and parcel of its personality traits. They don’t really make suitable dogs for first-time owners.

Given their high prey drive, they are best kept as the only pet at home and without any small kids.

Maintaining the shar pei’s fur coat does take some work due to the wrinkly loose skin. The dog owner needs to clean in between the folds to prevent any skin infection. 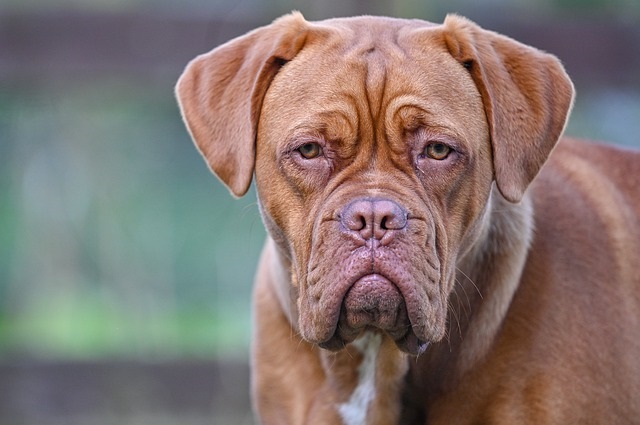 It might get mistaken for a bulldog due to the floppy loose skin on its face but the dog’s large build gives it away.

The dogue de bordeaux can grow up to 28 inches and weigh close to 120 lbs.

That is a lot of dog!

They are formerly bred as guard dogs, animal baiting and have been around since the 12th century.

Despite their large size, dogue de bordeauxs are actually very affectionate and sweet. They are also surprisingly good with kids and other pets.

However, like many of the above-mentioned dogs, this wrinkly dog can also be stubborn and difficult to train. 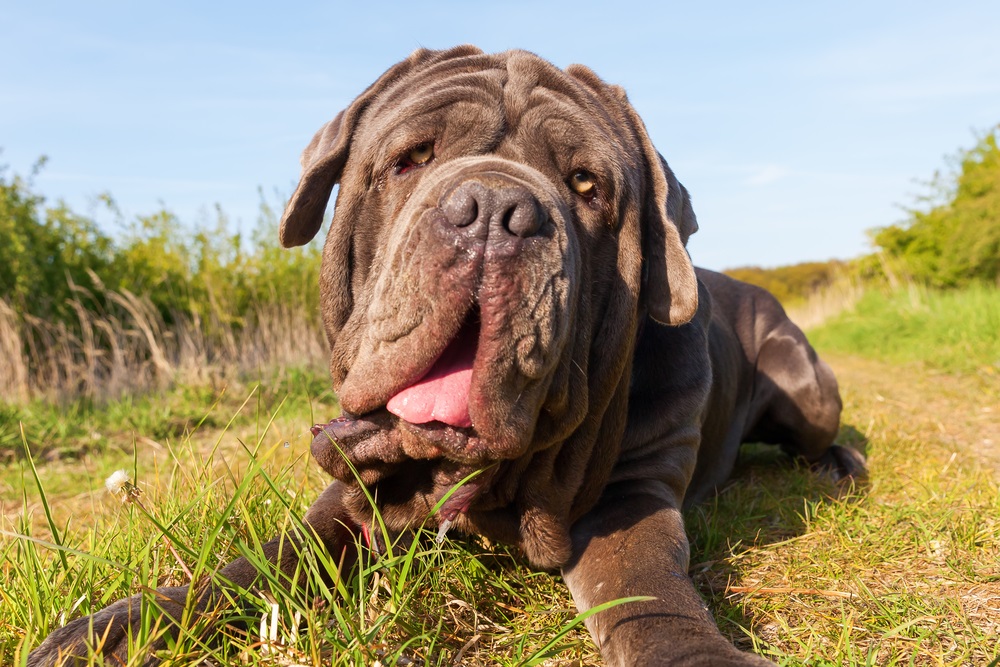 I have seen a neapolitan mastiff at a dog park before and it is one huge wrinkly dog with loose skin everywhere.

Pardon the crude analogy but it looks like a bean bag cover with the stuffing inside.

Don’t get me wrong.

They are very adorable dogs despite their large stature. A male can grow up to 150 lbs.

Known to men since the days of ancient Rome, these dogs make wonderful watch dogs due to their intimidating size.

Any intruder would think thrice before trespassing a home that has a neopolitan mastiff as a guard dog.

This gentle giant is sweet and gentle towards its family making them great house pets with kids.

Oh, did I also mention that they are drooling machines?

If you plan on having a neopolitan mastiff, be prepared to have dog drool everywhere. 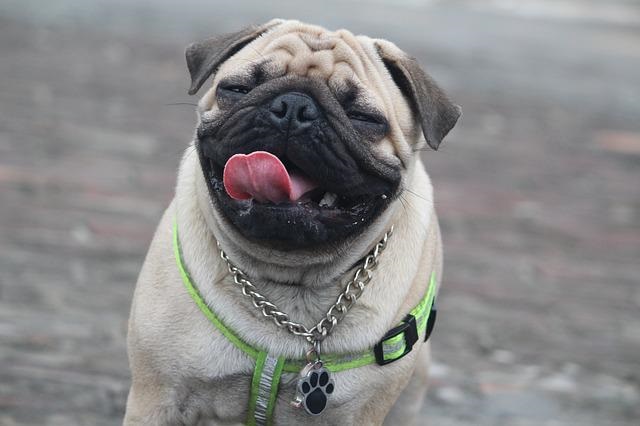 Mention this dog breed to dog owners and you’ll either get a smile or scowl in return. I personally feel that the pug is either a ‘love em or hate em’ type of dog breed with no room for being on the fence.

This small-sized dog looks somewhat similar to the bulldog with its squished-up and wrinkly face.

Like the shar pei, the pug also originates from China and has been around for many centuries. Pugs are also known to be very expressive dogs. They are one of the few dog breeds that is capable of looking, sad, happy and surprised at the same time.

Not the most energetic of dogs, pugs need a fair bit of exercise to prevent them from getting too ‘chonky’.

Pugs are adaptable dogs and make good house pets due to their easy-going nature.

The pekingese is a toy dog breed that makes it a rather small-sized bog. This dog originated from China like the shar pei and pug.

This dog breed was well loved by the royal family in China and got its name from the city where the Forbidden city is located, Beijing or Peking.

To put it simply, the pekingese resembles a pug, with their wrinkly and floppy faces. But instead of having a short coat, they come with a longer coat of fur. They have fur which is longest at the neck and shoulders making them look like a pooch with a lion’s mane.

Their long and thick fur makes them poor house pets if you live in a country that is mostly hot and humid.

Despite their tiny size, they are fiercely loyal and protective of their owner. They also tend to yap and bark a lot.

If you prefer a dog that is more chill and quiet, the Pekingese isn’t the right dog for you.

What Breed Of Dog Is Droopy?

I am a fan of old cartoon characters and Droopy the deputy dog was one of my favorite. The way he moves and speaks makes him really adorable.

Droppy is actually a basset hound which gives him his long droopy ears and floppy jowls. His ability to outwit his adversaries makes him a formidable cop. He also has a hidden temper which comes to life when a bad guy laughs at him.

Needless to say, it is always Droppy that gets the last laugh.

What Breed Of Dog Is Scooby Doo?

Another beloved doggie cartoon character of mine is Scooby Doo. Together with his gang of teenagers, they go about solving mysteries involving the ‘supernatural’.

Scooby Doo is a Great Dane in the cartoon who looks like a cross between a boxer and mastiff. He too has a floppy face but definitely not as pronounced as Droppy.

Scooby’s past time is eating, sleeping and eating.

Given the popularity of dogs with floppy faces, it is safe to say that there isn’t one particular dog breed or look that appeals to all dog owners.

And this is certainly great news.

All dog breeds have something to offer and if you are on the lookout for a dog with a face that flops all over the place, you definitely have a few options to choose from after reading this article. 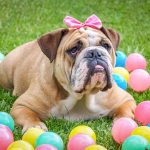 Bulldogs Are Ugly? (Beauty Is In The Eye Of The Beholder) 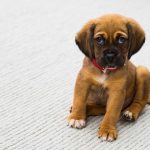 My Dog Keeps Sitting On His Bum (What Is Happening?) 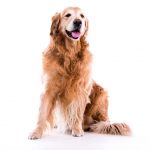 Dog Just Stands In One Spot (Why On Earth Is Happening?) 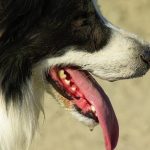