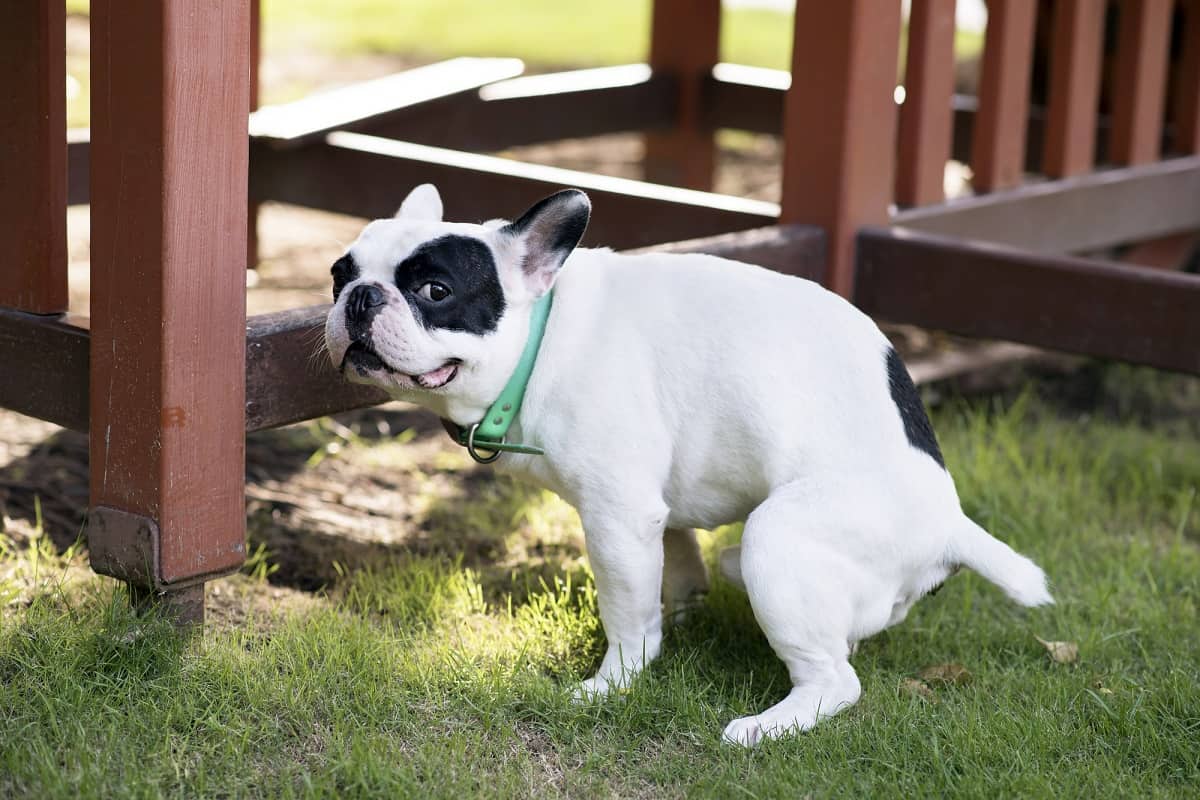 I have yet to meet a dog owner who isn’t nervous before each vet visit, even if it’s for something small. I’m usually a nervous wreck the night before and the day itself. Probably not the best mindset to be in as your dog can pick up on your nervous energy.

One of the biggest medical decisions that you can make for a female dog is to have her spayed. This is the process of removing her uterus and embryos to prevent any accidental pregnancies.

Spaying your dog is considered generally safe but it is the post-surgery complications and side effects that many dog owners are concerned about.

One common concern is when the dog is yelping when pooping after being spayed. Your dog could be yelping during a bowel movement due to feeling pain in the abdomen. Your dog engages its abdominal muscles while pooping. Medication used during the surgery can also give your dog constipation which makes it difficult for your dog to poop.

Let us take a closer look at the reasons that can cause your poor dog discomfort while pooping after being spayed.

How Is Spaying Done On A Female Dog? 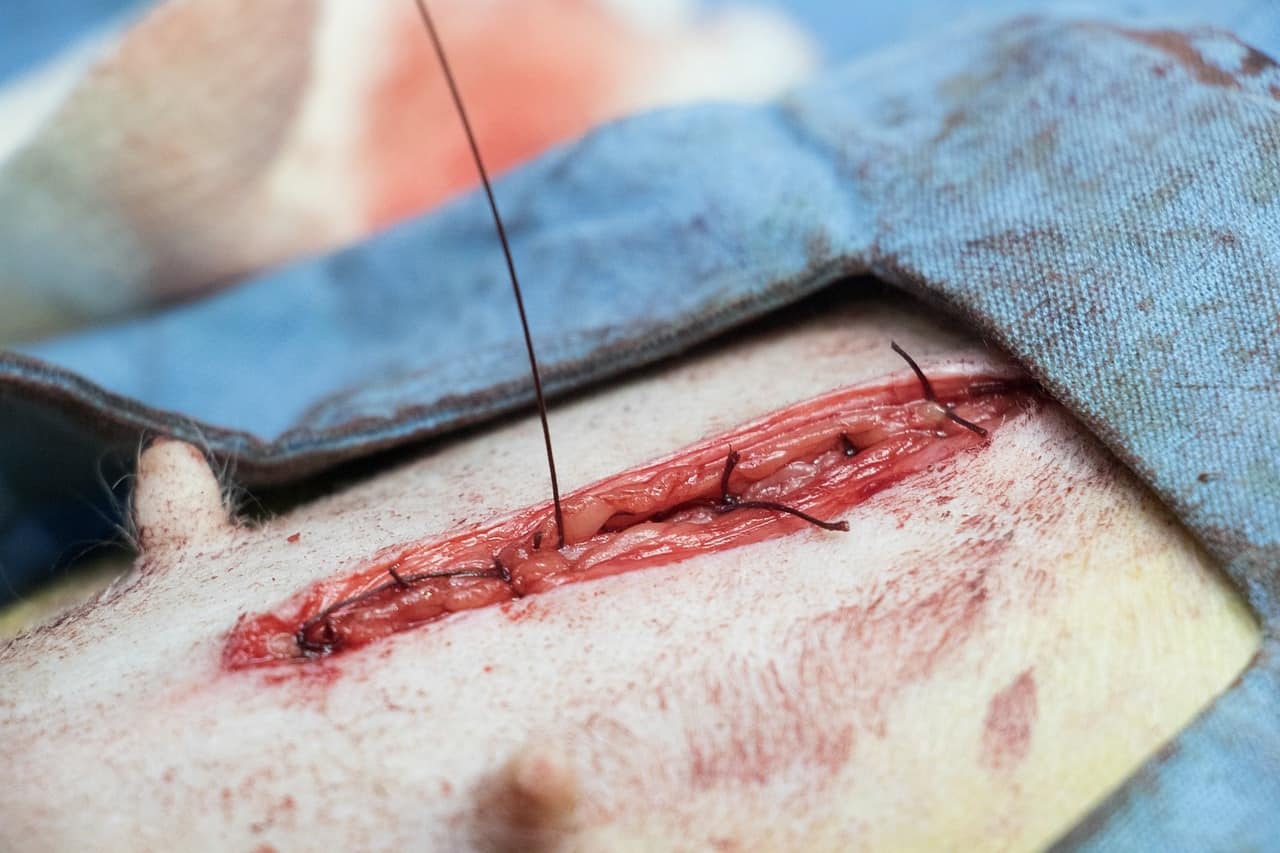 During the spaying procedure, the vet will surgically remove your dog’s fallopian tubes, ovaries and uterus. Besides preventing unwanted pregnancies in dogs, it can also improve the dog’s quality of life and prevent certain diseases.

Your dog is placed under general anesthesia and an incision is made in your dog’s abdomen for the vet to remove necessary. Once done, the vet will suture the incision and dress up the wound.

Antibiotics and pain medication will also be given to your dog to prevent any infection of the wound and help with the pain.

This whole procedure should take about 20-90 minutes, depending on the size of the dog.

Do Dogs Have Trouble Pooping After Being Spayed?

As someone who has looked after a few dogs after getting neutered or spayed, they tend to have trouble pooping after the procedure. It is possible for the dog to become constipated or have soft and smelly poop.

Male dogs tend to recover faster as the neutering procedure is a lot less intrusive compared to spaying. It takes about 5-20 minutes to make a small incision in the dog’s ball sack and remove the testicles.

If only it was that straightforward for female dogs.

Here are some reasons that can cause your dog to yelp when pooping.

Try simulating the act of pooping and take note of the muscles used. You will most probably feel the most contraction in your sphincter and abdominals.

Now imagine that you just had major abdominal surgery and have to take your first bowel movement. I’m guessing you will be doing a lot more than just yelping.

Your dog isn’t able to process what is going on and why is it feeling pain in its abdominal region when it tries to force its poop out.

It is natural for the dog to be crying out in pain having to take a poop for the first week or so.

Infection At The Incision Site 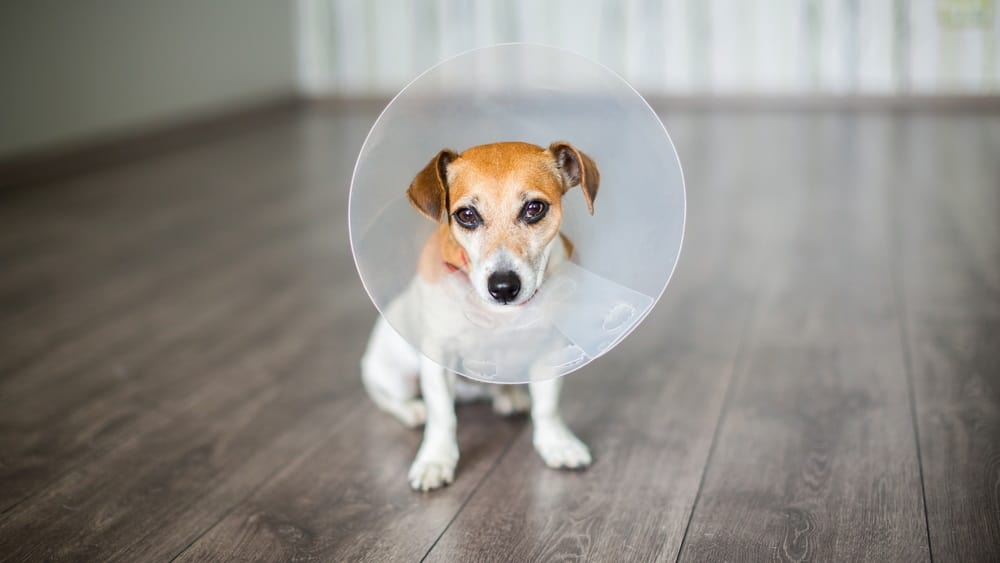 Your dog’s incision wound will take some time to heal but some dogs might suffer from an infection in that area if they start licking and biting at the wound.

The best way to prevent your dog from doing so is to make it wear an e-collar or dog cone. It isn’t the most comfortable of contraption for your dog to wear but it gets the job done. Thankfully, there are other alternatives to the e-collar if your dog is too stressed out by it.

If your dog is having an infection, you can notice bleeding, swelling, inflammation, pus and even a bad odor.

It is common for many dogs to suffer from constipation after being spayed for a number of reasons.

If your dog is feeling pain in its abdomen when trying to poop, you can expect your dog to not want to poop and hold everything in until the pain starts to subside and or get better.

Before you bring your dog to the vet to be spayed, they will most likely ask you to fast your dog for a good 8-12 hours before the procedure.

Many vets prefer to operate on a patient with an empty stomach to lower the risk of vomiting during the procedure which can turn into a choking hazard.

Dogs are able to digest their food a lot faster than humans. They take about 4-8 hours to digest, absorb and eliminate their waste. This would mean that when your dog returns home from the vet, its bowels would be empty.

My dog didn’t eat at all when he got back from the clinic. All he did was sleep the whole day as he was still feeling drowsy and behaving weirdly due to the effects of the anesthesia.

It was only during the second day that he started nibbling on his food and only got back his full appetite after a few more days.

The medication that was used during the spaying procedure can also cause your dog to be constipated. This can be from the anesthetic agents or painkillers administered by the vet.

Don’t be too alarmed if your dog doesn’t start pooping when it’s back home. Give your dog a few days to settle back in and regain its normal pooping schedule.

How Long Will A Dog Be In Pain After A Spay?

After bringing your dog home from theft, it should still be feeling sleepy and drowsy from the anesthetic and the vet would have given your dog some pain meds already.

You can expect your dog to spend most of the day sleeping and not feeling much of the pain until the pain meds start to wear off.

Make sure to feed your dog the prescribed pain killers for another day or two. The pain should start to diminish to a more manageable level that doesn’t require medication and be completely gone in a week.

How Do You Know If Your Dog Is In Pain After Being Spayed? 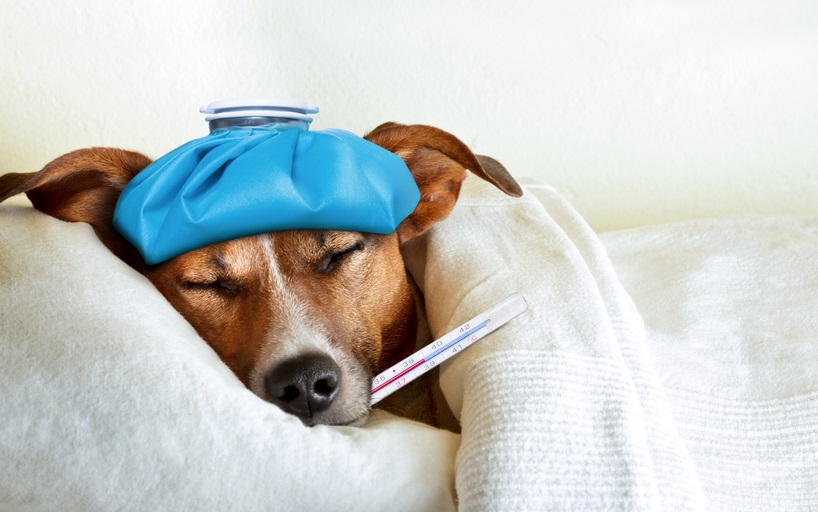 It is good for the dog owner to recognize the signs of symptoms of a dog in pain after being spayed. This will allow the owner to stop or continue giving the dog pain meds to help manage the discomfort.

How Long Does It Take A Dog To Poop After Surgery?

Don’t start frantically pressing the emergency button if your dog doesn’t start having bowel movements after a few days. It might take even longer for smaller dogs as they are more sensitive to the process.

That is rather normal for dogs that have gone through surgery.

What you can do to help your do is to try and introduce more roughage and fiber in its diet. I don’t mean start feeding your dog more fruits and vegetables or turn it into a vegan until it poops again.

There are some things that you can do such as feeding your dog a small amount of fresh pumpkin or psyllium husk until it starts being regular again.

Some of my friends have even fed their dogs some olive oil to lubricate their intestines and make it easier for the dog to poop.

As long as your dog has started eating, drinking water and coming back to its old self, I wouldn’t call it an emergency.

But if your dog has not eaten for more than a day and looks like its having an infected incision site, you need to let your vet know and get some advise on what to do next.

You might have to bring your dog in for further medical treatment.