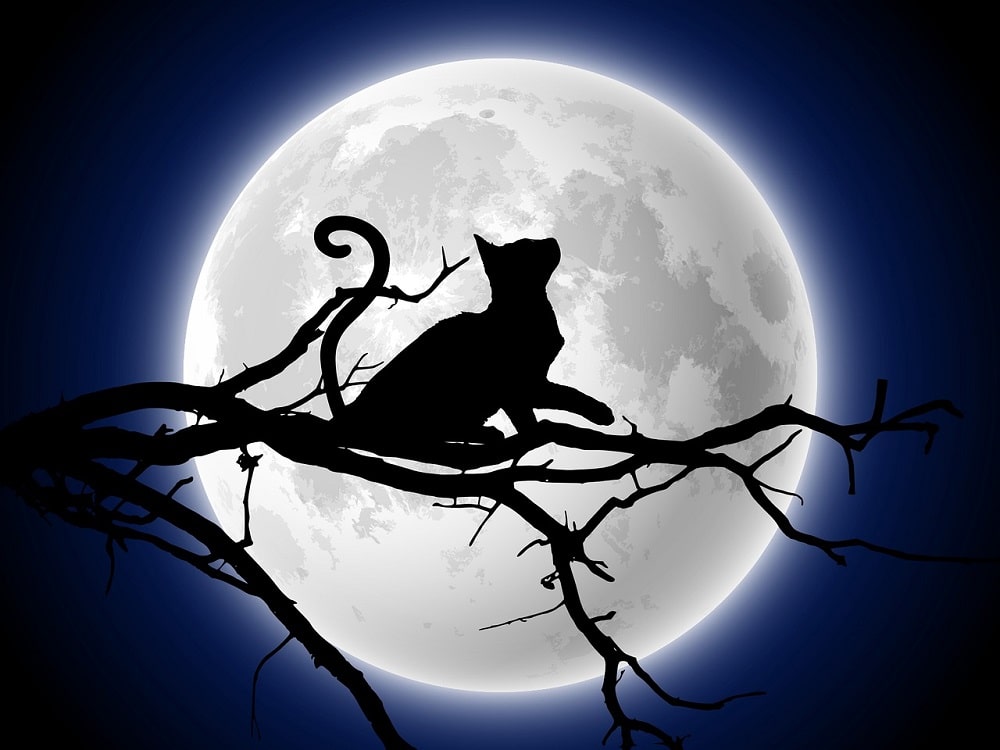 Dogs and wolves are known to howl more during a full moon.

But what about cats?

Does a full moon affect cats in mysterious ways too?

If you are have seen a couple of horror movies before, the night always seems to get scarier and crazier during a full moon.

Some early studies have soon that our blood pressure and heart rates are lower during a full moon. A full moon can also help alter the moods and emotions of certain individuals.

So if there’s some clear evidence showing that a full moon affects humans?

Shouldn’t we pet owners be curious to find out if our feline friends are affected by the moon phases?

The Moon’s Effect On Earth

A good starting point would be to understand how the different phases of the moon have an effect on planet earth.

There is a daily influence on planet earth and the sun by the Moon. This is due to the magnetic force that exists between these planets.

This force affects the earth’s vast bodies of water, triggering the movements of ocean currents and their resulting tides. When the moon remains in its complete phase, the ocean’s tides are at their highest.

My Cat Is Meowing More During A Full Moon

A cat’s behaviour can be rather difficult to predict due to its fickle nature. However many pet owners have noticed their cats meowing more during a full moon.

There are also other ‘uncommon’ behaviours that cats are said to exhibit during a full moon.

The full moon can have a multiplier effect on your cat’s personality.

These behaviours can cause some cats to injure themselves. In fact, a study has shown that during a full moon phase, there was a 23% increase in the number of vet visits for cats.

There is very little scientific evidence that can medically ascertain and pinpoint the exact reason or reasons. But there has speculation that it could be caused by the brightness of the night due to the full moon.

Can Cats Sense A Full Moon?

Cats do not have an internal sensor that can sense or anticipate changes in the lunar cycle. What causes some cats to be more sensitive to full moons is due to changes in their circadian rhythm.

The Full Moon And Your Cat’s Sleep Cycle

Our daily sleep cycle is regulated by the Circadian rhythm.

The Circadian rhythm is our 24-hour internal body clock that regulates our cycles of awareness or being awake vs our sleep cycle. This is managed in relation to the amount of light in the environment and can have an impact on our physical and mental behaviors.

Both humans and animals have their own specific circadian rhythms.

Cat owners will notice that their cats sleep a lot, more than twice the amount of sleep we need.

The circadian rhythm of a cat has two peak cycles. One in the early morning and the other in the evening.

This goes back to the predatory nature of cats where they will hunt once in the morning and another time later in the evening.

The rest of the time is spent sleeping to recharge and prepare their bodies for the hunt.

It Gets A Lot Brighter During A Full Moon

The moon is at its brightest during a full moon.

In fact, the full moon is about 6x brighter than a half-moon to give you a sense of comparison. If you ever noticed a full moon, the moon does look a lot closer and brighter than any other moon phase.

This is because the sun and moon are aligned on opposite sides of the earth. That means the side of the moon facing the earth is fully illuminated

As mentioned above, circadian rhythm has an impact on our physical and mental behaviors that are based on the amount of light around us.

Therefore, if the full moon is a lot brighter than usual, wouldn’t that affect our cat’s sleep cycle?

The cat’s circadian rhythm might be fooled into thinking that it’s dusk instead of night and that triggers the alertness in cats and puts them into hunting mode.

Some cats might be thrown off by these changes in their bio-rhythm and start to get anxious or more active.

How You Can Help Your Cat During A Full Moon?

Although not all cats are affected by changes in the lunar cycle. For cat owners with anxious or mood-sensitive cats these tips can help keep them calm.

If your cat sleeps outdoors or can come and go as it pleases, it is best if you keep them indoors during the night.

There is no telling how your cat will react when the moon is full and furthermore, a full moon affects other animals as well.

If you have wild animals around your area, a bright full moon might cause them to be more active at night and can cause harm to your cat.

If you have a cat that acts funny during a full moon, it would be best as a cat owner to take note of the lunar cycles.

During the night, make sure that your curtains or shades are drawn to eliminate excessive moonlight brightness.

This will allow the cat’s circadian rhythm to regulate as normal without upsetting the cat’s sleep cycle.

Talk To Your Vet

For cats that don’t seem to respond well to the above tips, talk to your vet for help. Your vet will most probably give your cat a mild sedative that can help to keep them calm during full moons.

Should Pet Owners Be Wary Of Full Moons Now?

Not to point of being paranoid.

Indoor cats can be easier managed during such an event as compared to outdoor cats. The main aim is to keep your cats indoors and away from any potential danger.

If your cat has never been sensitive to changes in the lunar cycle, there’s little possibility of it turning into a ‘lunatic’ during the next full moon.