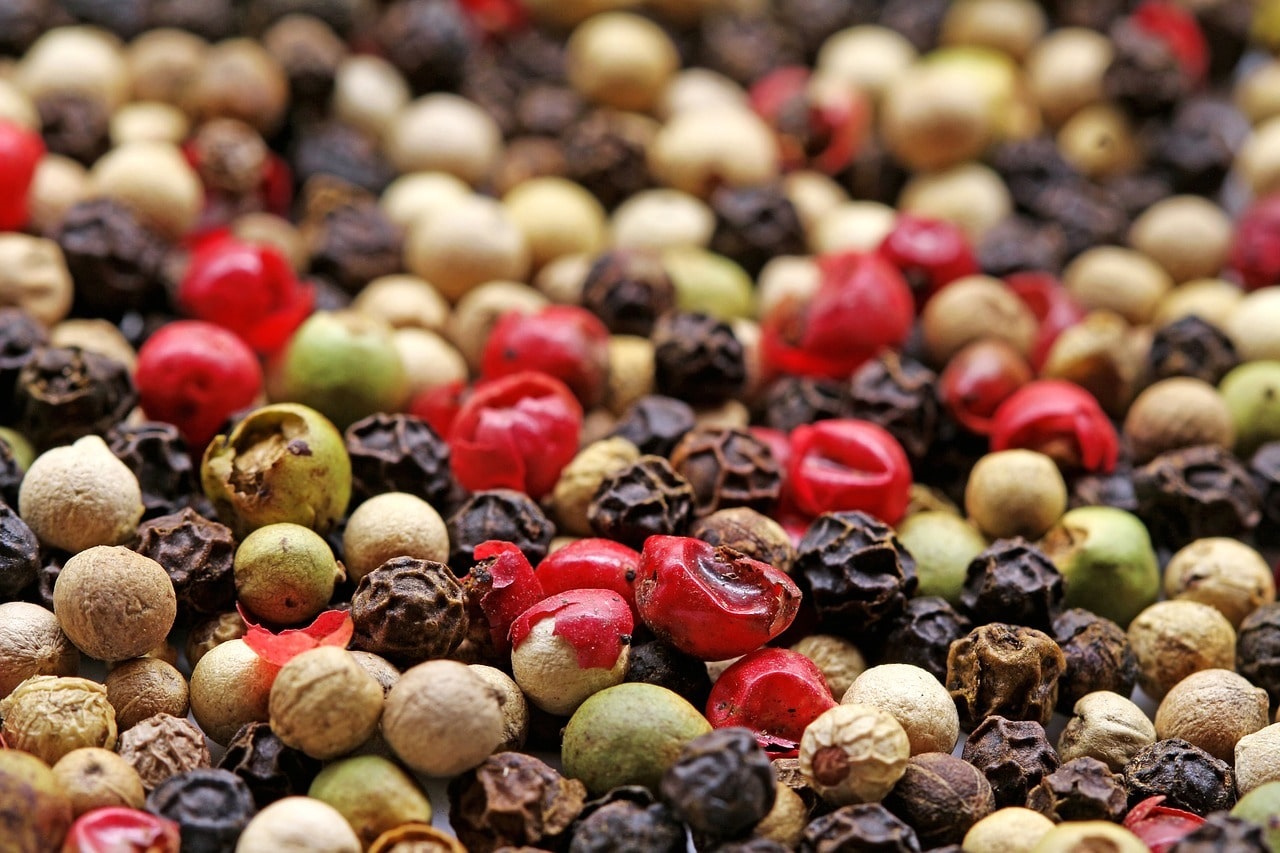 Many say that variety is the spice of life.

And to spice up our food, it is always good to add a little pepper to enhance the flavors.

The question of the day is whether can cats eat pepper?

Are there any health or wellness for cats when it comes to ‘spicing’ it up a little?

Are Cats Allergic To Pepper?

Mention the spice ‘pepper’ and adjectives like hot, spicey, burning, sneeze-inducing come up. The kind of pepper that we will first be talking about is one that is commonly found on the dining table, black pepper.

There is no concrete proof from studies that are allergic to pepper. However, from my point of view, it serves no purpose for any cat owner to feed black pepper to their feline friend.

I highly doubt any cat would find black pepper to be appetizing at all due to the smell and the adverse effects it can have on the cat’s body.

Technically they could if they wanted to. Cats smell their food before eating and the smell of black pepper can be very harsh on a cat’s nose. One sniff for humans is enough to induce a sneezing fit let alone for cats whose sense of smell is 14x more sensitive than ours.

It would definitely burn or massively irritate the inside of the cat’s nose or even damage its scent receptors.

The spiciness of the black pepper can also cause a bad burning sensation in your cat’s mouth. The black pepper fumes can also irritate their eyes and cause them to water.

Any site that claims it is fine to feed your cat any type of black pepper should NOT be taken seriously.

Furthermore, there is no nutritional value in black pepper for cats.

Should You Be Concerned If Your Cat Has Eaten Black Pepper?

If your cat has stolen some beef jerky off your plate that has some black pepper on it, I doubt it would cause any harm.

Anyways, it isn’t good for cats to be stealing food off your plate.

It can be dangerous for them if the food contains large amounts of spices or sauces that can be toxic to cats.

Is Black Pepper Toxic For Cats? 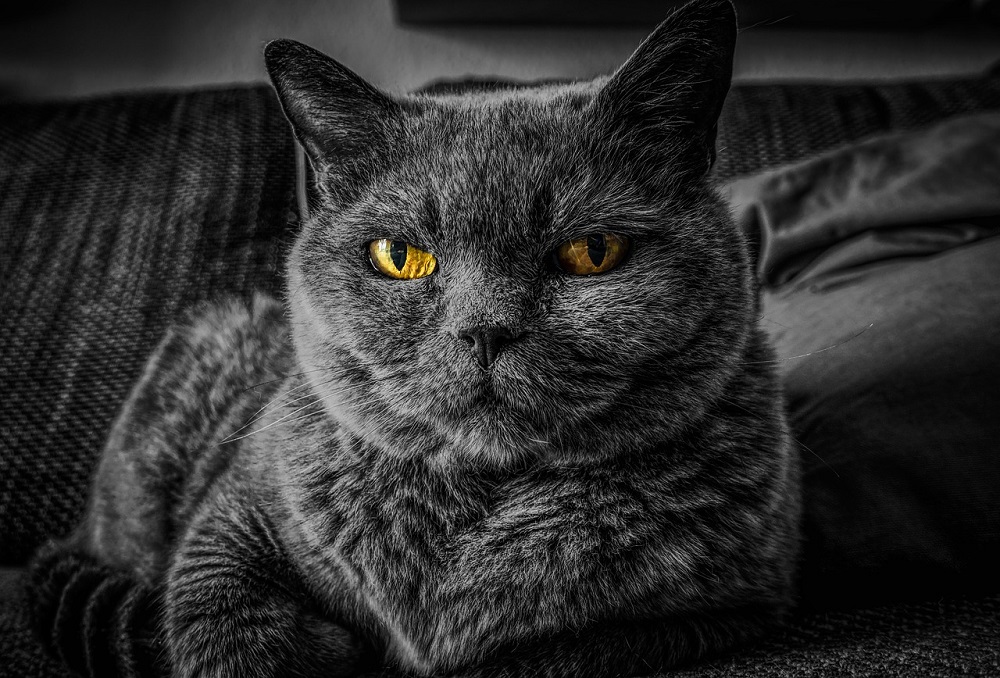 If the cat has ingested a very small amount of black pepper, it should be fine. The black pepper can irritate his nose, throat or cause an upset stomach for a brief moment.

But if your cat has been consuming black pepper on a regular basis without your knowledge, it can be toxic for your cat.

Black pepper contains terpenes and essential oils which are known to be toxic for cats. Terpenes is a compound that is responsible for how some plants smell like.

These compounds, when eaten over the long term, can cause kidney damage to cats.

So please keep your black pepper or spicy peppers away from your cat and do not add such species to your cat’s food.

Black Pepper As A Natural Repellant

To further illustrate why black pepper is not something cats should be eating is due to the fact that it is used as a natural repellant…for cats!

Many gardeners sprinkle crushed or ground black pepper all over their yard or garden to prevent cats from coming onto their property and digging up their plants or pooping in their plant pots.

Cats hate the strong peppery smell as their sense of smell is so strong that they can pick up the harsh scent long before they even see it thus avoiding that area. Thus making black pepper a great natural cat repellent.

Makes no sense for cats to eat something that they are trying to avoid.

Some people will also use cayenne pepper as a natural repellant as it helps to keep cats away but its not toxic if ingested.

What To Do If Your Cat Has Eaten Black Pepper?

There are some cats that love living life on the edge since they know that cats come equipped with nine lives.

If your cat has consumed some black pepper, make sure to keep a close watch on it for the next 48 hours. If your cat shows any signs of vomiting, diarrhea, loss of appetite, please bring it to the vet right away for an examination.

White pepper also comes from the same plant as black pepper, Piper Nigrum. The difference between white and black pepper is the harvesting and processing technique.

White pepper is known to be milder than black peppers in terms of taste and smell. However, when ingested by a cat, white pepper can also cause the same harm and effects as black pepper.

So please do not feed any white pepper to your cat.

No, they cant. Lemon pepper is made from crushed lemon zest that’s mixed with black peppercorns. There are substances found in a lemon that can be toxic for cats, mainly limonene, linalool and psoralen.

Cats should avoid these compounds at all costs as they can be deadly when consumed by them.

What Type Of Peppers Can Your Cat Eat?

We now come to a different type of pepper that is known to be fine for your cats to consume. Some cats might even like the taste and smell of it.

These are called bell peppers.

There are three different kinds of bell peppers and we will be going through each one to determine if it is ok for your cat to consume it.

What Are Bell Peppers? 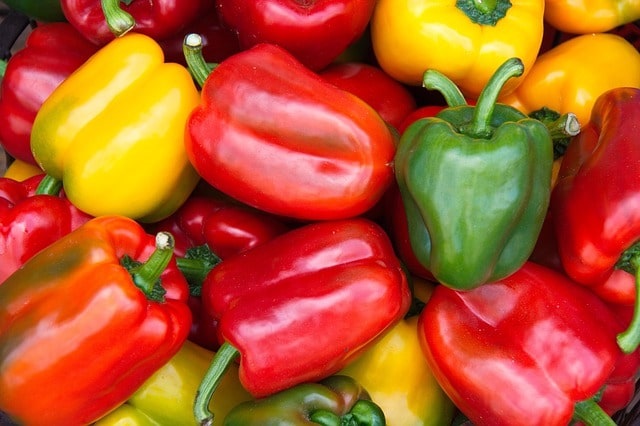 Bell pepper, also known as Capsicums to some of our fellow readers are called sweet pepper. It gets its name because bell peppers don’t contain the spicey traits of black pepper and can taste sweet in some cases.

Bell peppers are widely used in salads in restaurants and at home due to their crunchy texture.

If your cat likes being in the kitchen while you cook, it might have taken a bite or two off a bell pepper.

There are three types of bell pepper:

I have to admit, for the longest time, I’ve always thought that these three types of bell peppers come from different plants.

Let us first address the elephant in the room.

Yes, cats can eat bell peppers. There are no known toxins or poisons that are known to be harmful to our cats.

Furthermore, bell peppers contain many good vitamins and minerals for humans and it is also a healthy snack due to their low calories.

However, this health benefit doesn’t quite translate to our cats as getting their dietary nutrients should be coming from a meat source and not plant matter.

Cat’s don’t have the enzyme to digest plant matter like humans and dogs. This is why cats are known to be obligate carnivores and a cat’s diet should be a high protein meat diet.

Cats do eat some plants like wheatgrass every now and then for hairball management.

But if for some weird reason your cat loves the taste and smell of bell peppers, it is ok to feed your cat some as a treat.

Do note that not all bell peppers are made equal as they are harvested during time intervals.

Green bell peppers are the first to be picked during the ripening process. Hence they don’t contain as many vitamins and minerals as compared to the yellow or red ones.

It is still fine if your cat wants a few pieces of it. Green bell peppers can be slightly tougher and more ‘earthier’ in smell.

Red bells peppers are harvested the latest and taste the sweetest. It also contains the highest concentration of minerals and vitamins, like vitamin A, C and beta-carotene, as it has been on the vine the longest.

Most cats would prefer eating a red bell pepper due to it being more palate friendly.

Yellow bell peppers are safe for cats to eat as well. In terms of nutritional value, they fall in between the green and red bell pepper.

There is still a good amount of vitamins and minerals but not as much as red bell peppers.

As cat owners, we need to be aware that food that is deemed to be good or safe for human consumption, might not be the same for cats.

Cats have a very different dietary requirement from us and it would be best for them to stick to a diet that is beneficial for them.