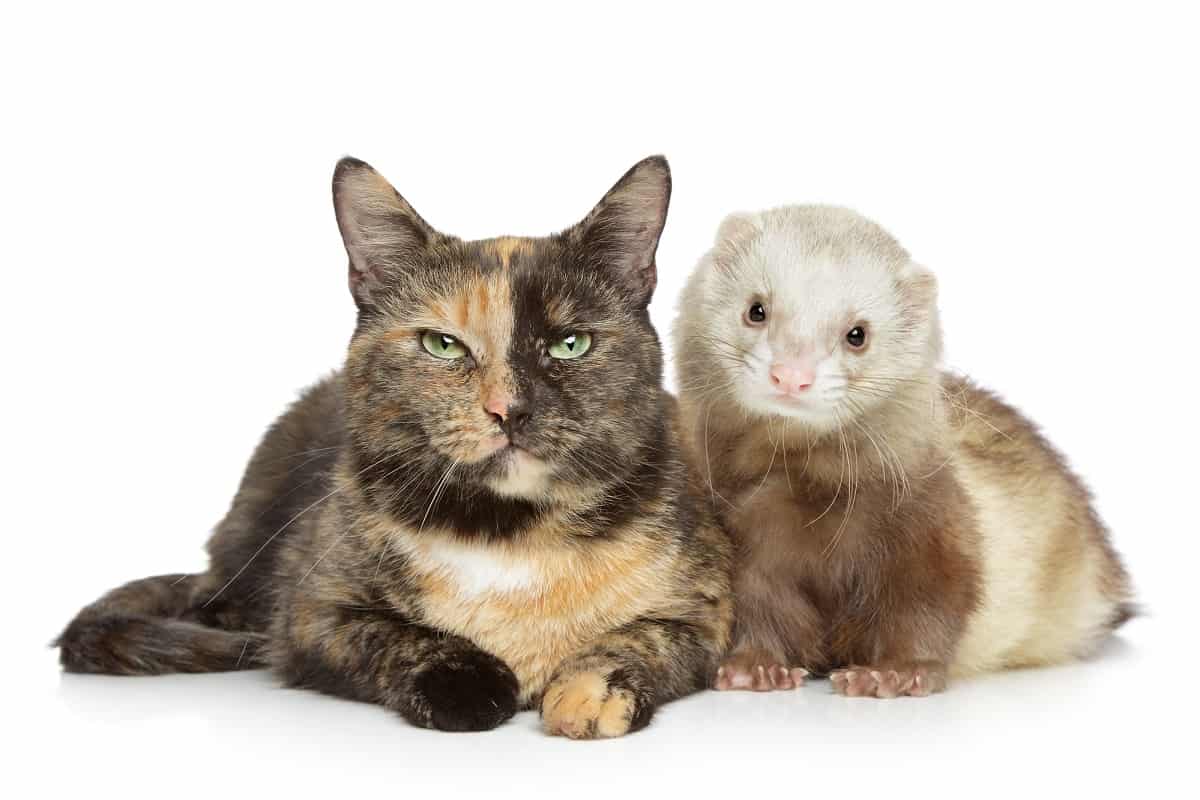 I got a call from a good friend the other day who sounded more excited than usual. The first words out of her mouth were ” I got a ferret!”. Needless to say, I was over at her place in less than an hour.

This was my first time actually meeting a ferret in person and boy, was this guy a pocket rocket and a slinky on roids. You got to play with one in person to get what I mean.

My friend has two cats as well that were still rather cautious of the ferret but they will be best of friends in due time. One thing that we discussed in detail was the nutrition requirements of a ferret and letting her cats eat ferret food as well.

Let us take a look at the dietary requirements of both a cat and a ferret and determine if cats can eat ferret food.

What Is A Ferret? 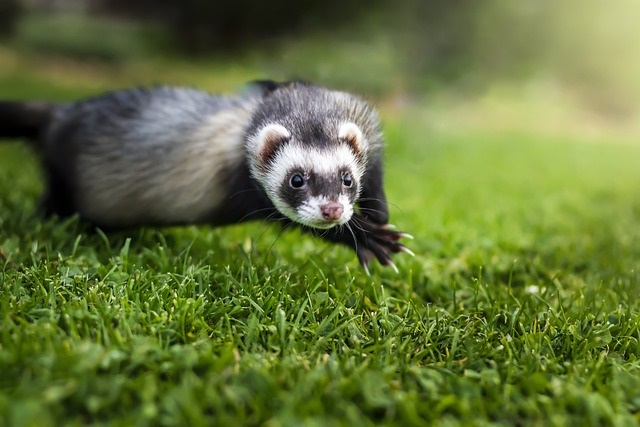 Most of us would think of a ferret as a rat due to somewhat similar physical attributes. But that’s actually wrong.

Ferrets aren’t rodents but are in the same family as otters, minks, weasels, etc. They have cute little adorable faces, a long body and short legs. They might seem like wild animals to us but ferrets have been domesticated for more than 2500 years.

Ferrets were bred for hunting rodents and rabbits in the past but are now kept as pets in many households.

What Is The Natural Diet Of A Feret?

One might look at a ferret and think that it eats nuts and fruits but ferrets are actually obligate carnivores. This puts them in the same dietary category as our feline friends.

As obligate carnivores, ferrets need a diet that is high in protein, not from plant matter but from animal meat. Ferrets in the wild are rather amazing hunters and will eat prey like possums, rabbits, small rodents, birds and hedgehogs.

They are also comfortable with eating aquatic prey like fish and frogs.

Similar to cats, ferrets are not able to digest any form of plant matter efficiently. They can eat it but their tummies won’t like it.

What Is The Natural Diet Of A Cat? 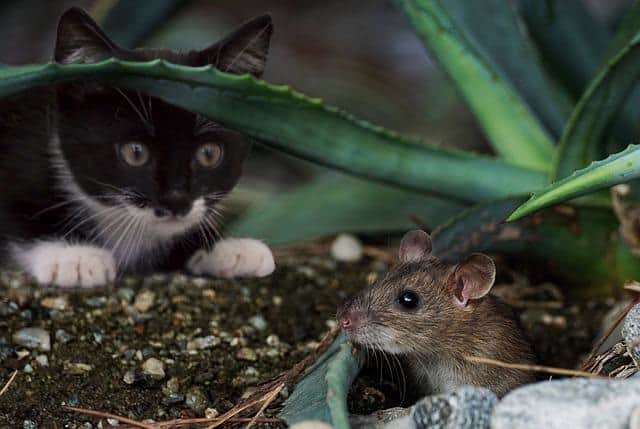 Given that cats are obligate carnivores, they share the same dietary requirements as ferrets too. Our cats need a diet that is high in animal meat to survive as they are not able to digest carbs and fiber effectively.

Like their ferret counterparts, cats are amazing hunters and will eat small critters and mammals. They aren’t big on prey like fish and frogs though unless food is scarce.

When a cat eats its prey, it will eat almost everything from the meat, organ meat and bones.

What’s The Difference Between Ferret Food And Cat Food?

How different ferret food and cat food are, depends mainly on what you plan to feed your cat and ferret.

In order to do a comparison, I took a look at the kind of ferret food there are sold in stores to see what goes into them.

Almost every store that I looked at only sold dry food for ferrets which to me isn’t something I find healthy. The number of brands available isn’t as diverse as they are for cats and that means you are stuck with very limited choices.

There are some brands that use chicken meal and chicken as their main ingredients rather than chicken by-products. Chicken meal is actually chicken that has been dehydrated and grinned down to a powder form which makes it easier to make dry food.

Chicken by-product is made from everything else from the chicken that isn’t meat like their bones, feathers, head and feet. Some by-products just contain the organ meat of the animal.

I would strongly suggest that you avoid any commercial pet foods that have by-products as their main ingredient as it doesn’t have the necessary nutrients and its low-quality food.

Many of these dry food for ferrets also contain fillers like grain and corn to add some bulk to the kibbles. We know by now that ferrets are obligate carnivores which makes carbs a bad choice for them.

Truth be told, the majority of dry cat food contain very similar products. However, there are some top brands that are trying to make dry food seem healthier by using better quality meant and using lesser fillers (grains).

Commercial ferret food is a lot worse than cat food. Pet food manufacturers are more willing to spend more on improving their cat food as cats are the second most popular pets after dogs which means there’s a lot more money to be made.

Ferrets on the other hand are deemed as pocket pets and are seen to be in the same group as rodents and rabbits. So the commercial ferret food that you find in pet stores is more for convenience’s sake and badly lacking in nutrition for the ferret.

If you are feeding your ferret a good quality diet then it is possible for your cat and ferret to share the same food.

One diet that I would strongly suggest putting both your cat and ferret on is the raw food diet. The raw meat diet is great for pets that are obligate carnivores as it provides them with enough protein from animal meat to satisfy their nutritional needs.

More protein is always a better option than less for these pets.

By feeding your cat and ferret the same type of raw diet, you can be sure that you are feeding them good quality meat with all the unhealthy fillers and synthetic stuff that is being used in commercial pet food.

You might have to tweak the amount of bones that you feed them as ferrets are better at eating denser bones than cats can’t. For example, chicken neck and chicken thigh bones. However, never feed your pets raw bones due to how dangerous they can be for the animal.

I understand from many of my readers that they find feeding a raw diet intimidating due to the risk of foodborne diseases. I won’t deny the fact that raw food has a higher risk of contamination but the bodies of a cat and ferret are equipped for handling raw food well.

If you are looking for a comprehensive guide on feeding raw to your cat and ferret, you can check out this post that I wrote.

Is Ferret Food Safe For Cats To Eat? 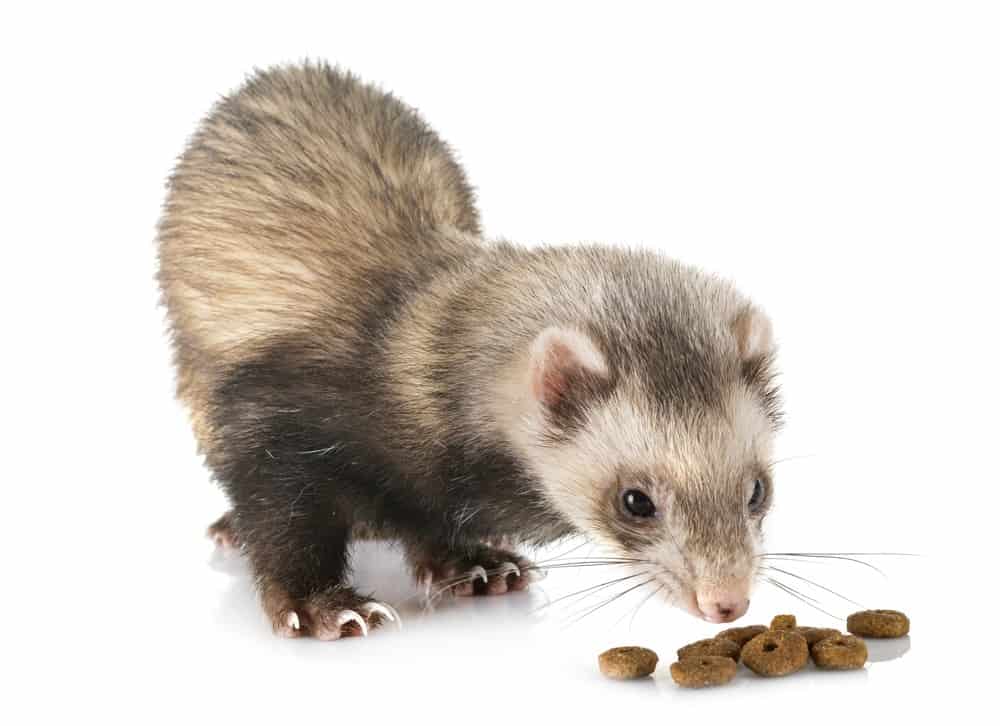 Use it only when you’re in a pinch or bind. Like when you’re cat is hungry and you’re totally out of dry cat food.

Some cats tend to be very fussy about their food so they might not even want to have a bite of ferret food after smelling it.

Can You Feed Kitten Food To Ferrets?

If your kitten is still on a milk formula, I wouldn’t advise you to give that to your ferret. Ferrets are lactose intolerant and are not able to digest dairy products well. This can cause diarrhea and vomiting in them.

If your kitten has already been weaned off milk and is on a diet that consists of good quality wet food or a raw diet, then yes, your ferret can eat cat food under such circumstances.

Cats can eat dog food if they are greedy enough to want it. Many commercial dog food has the same ingredients and nutritional profile as cat food.

However, the one thing which is missing in commercial dog food is taurine. Taurine is an amino acid that is essential for cats as their bodies aren’t able to produce it as dogs can.

Taurine is important for a cat’s vision, heart, fetal development and to maintain a robust immune system.