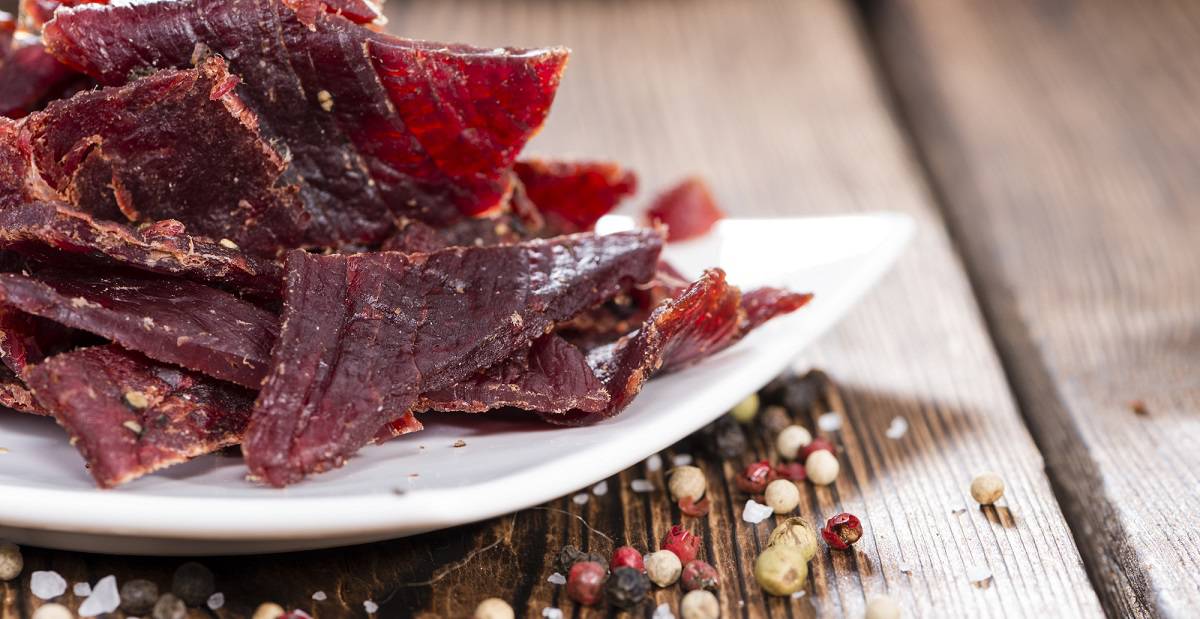 Some of my friends call me a compulsive chewer. I have a rather eccentric habit of chewing on stuff. When we eat out, I chew on bread. When at home working, I chew on my beef jerky.

I like beef but eating steak daily can get expensive which explains my love for beef jerky. As much as I love sharing my food with my cat when it is appropriate, beef jerky is something I’m not keen on giving my cat.

Can cats eat beef jerky? Cats should not be eating beef jerky as such foods are not healthy for them. Beef jerky contains a lot of salt which cats do not need. There might be other preservatives and artificial flavorings that can be toxic to cats.

In this article, we will be taking a closer look at what goes into the making of beef jerky and why it isn’t a healthy treat for your cat.

What Is Beef Jerky? 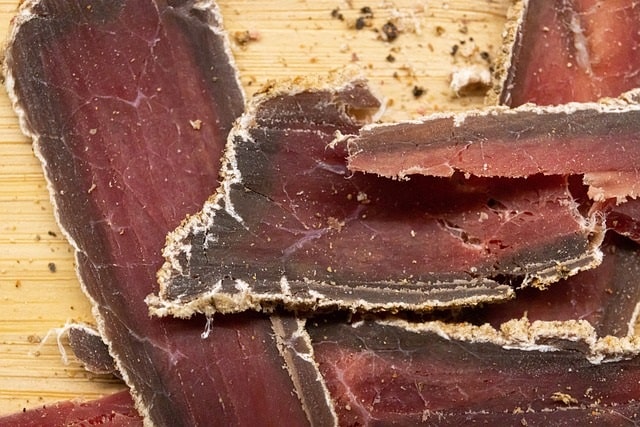 Beef jerky is basically a lean piece of beef that has been cured (salted) and dehydrated and slowly cooked over low heat until all the moisture is removed.

What remains is a hard, dry and tasty piece of meat that is tasty and chewy.

Beef jerky isn’t some modern invention that was the brainchild of a boardroom of suits. The history of jerky went back as far as the 1500s when it was discovered that by removing the moisture in the meat and curing it, the meat can last a lot longer than fresh meat.

This was great for the people back then who didn’t have the luxury of refrigeration and had to travel large distances over long periods to get to their destinations.

Jerky can be made with not just beef but with any type of meat known to mankind. There is also vegan jerky if meat isn’t your kind of thing.

Is Jerky For Cats?

Many cat owners might be thinking that since cats are obligate carnivores that need to eat meat to survive, shouldn’t it be fine to feed my cat beef jerky?

Well, as if some things in life, the answer is it depends. The devil is in the details and as a cat owner, it is the kind of details that can end up impacting your cat’s health.

Here are some reasons why I wouldn’t recommend feeding your cat beef jerky or any jerky for that matter.

Beef Jerky Contains Too Much Salt 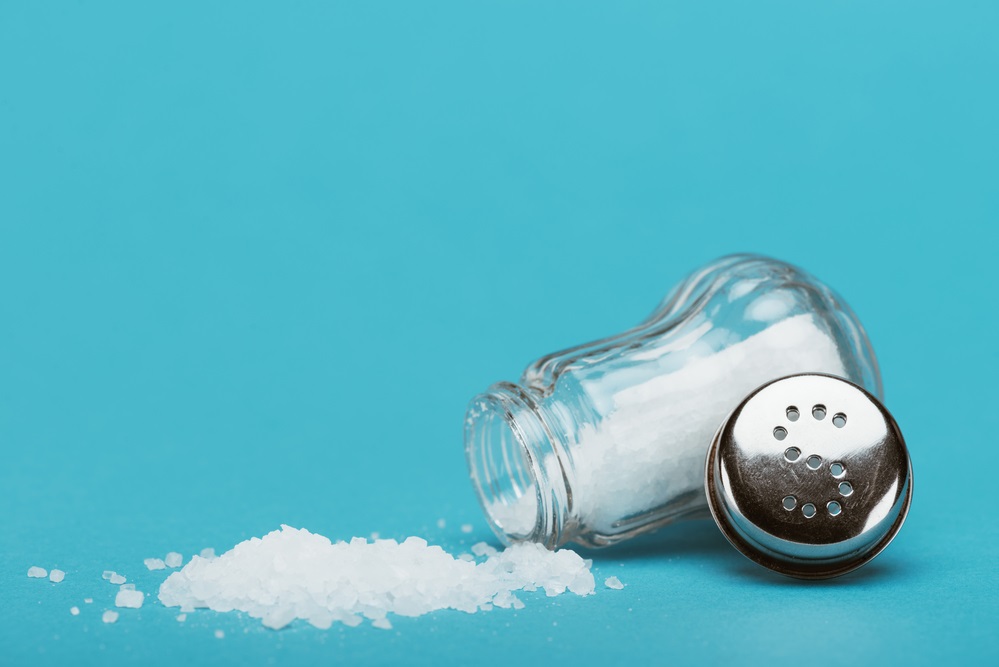 One bite of beef jerky and you can tell how salty it can be. I’m always drinking boatloads of water once I’m one with mine.

Salt isn’t bad for us. In fact, we humans and our cats do need a certain amount of salt in our diet for proper bodily functions. Without salt in our bodies, we will all be cramping up and unable to retain any form of hydration.

Even though salt is necessary for your cat’s well-being, too much salt in your cat’s diet can have the opposite effect.

How Much Salt Does My Cat Need?

Truth be told, I have yet to find a benchmark for this figure. The amount of salt that your cat needs can vary over a large range depending on what you read and who you ask.

Some vets recommend a sodium intake of 0.5g per 1000 calories of food intake. So if your cat eats 200 calories a day, it should only have 0.1g of salt daily.

If you are feeding your cat a good quality diet like wet food or raw meat, you shouldn’t be too concerned about your cat’s salt intake. Your cat is getting all the sodium that it needs.

But if you are feeding your cat a bad diet like dry food and lots of salty human foods as treats, you need to stop doing that.

Why Is Too Much Salt Dangerous For Your Cat?

Not many cat owners are aware that too much salt in your cat’s diet can lead to salt poisoning. This happens when your cat consumes a large amount of salt in one sitting or over a period of time.

The common symptoms of salt toxicity include:

100g of beef jerky contains 2081mg of sodium which is almost 86% of an adult’s recommended daily salt intake. For greedy cats, 100g of jerky is a piece of cake and that is enough salt to do some serious damage to their bodies.

If you allow your cat to consume fish sauce or soy sauce you need to put a stop to it as these sauces have just as much sodium as beef jerky in them.

Salt toxicity isn’t something to be taken lightly as it can be deadly for some cats like kittens or have existing kidney issues.

Beef Jerky Is Too Tough

As much as I enjoy the occasional beef jerky snack, it does feel like I’m chewing on a piece of tasty dried-out couch leather. All the biting, tugging and chewing gives mouth and jaw muscles a good workout after a while.

If your cat gets hold of a piece of beef jerky, it will attempt to tear it into small pieces with its front teeth. Even though your cat’s teeth are made for some serious tearing and ripping, its natural prey wouldn’t be as tough as beef jerky.

This can cause damage to your cat’s teeth or even an accidental extraction if your cat gets too aggressive with the biting.

Let’s just say your cat has jaws and teeth of steel and managed to bite off a piece of beef jerky. When your cat eats beef jerky, it ain’t going to be chewing the jerky into smaller pieces before swallowing it.

Cats don’t chew their food like us humans to pre-digest their food. All the digestion is done in their very acidic stomachs. All your cat has to do is to gulp down chunks of its food quickly.

If the piece of jerky is too big for its throat, there is a risk of it becoming a choking hazard for your cat as jerky is very rough and dry in texture.

The lack of moisture in jerky will make it very tough and pointy. Even small pieces might be sharp enough to inure your cat’s throat when it swallows.

If this is the year 1614 and we are feeding our cats beef jerky which we have cured, the ingredients would be a lot safer than what is being used now.

Here are some common ingredients that can be toxic to your cat.

Sodium nitrite is a white-yellowish powder that is frequently found in cured meat. It is used to give cured meat its salty flavor, color and to also prevent the growth of bacteria, mold and fungus on the meat.

There have been reports of cats dying from eating commercial pet food that contains too much sodium nitrite. And sodium nitrite is known to be carcinogenic or cancer-causing.

However, sodium nitrite is still being used in many modern pet food brands as it is claimed to be ‘safe’ in very small quantities. 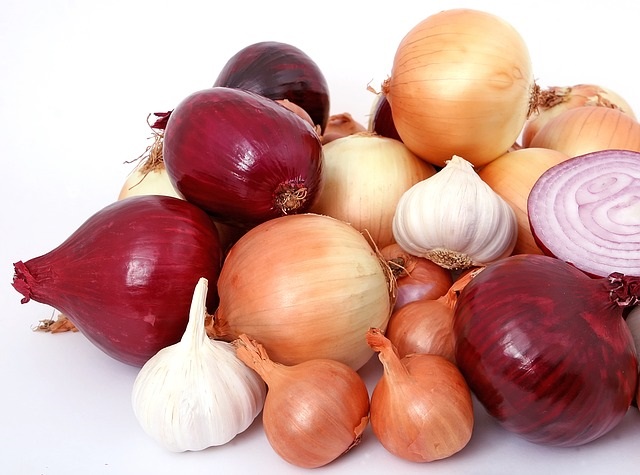 Onion and garlic powder are commonly used in beef jerky for taste and seasoning. Unfortunately, these two ingredients can be very toxic to cats.

Onion and garlic are part of the allium family which can cause damage to your cat’s red blood cells when ingested. This can affect the amount of fresh oxygen that circulates throughout your cat’s body.

Symptoms of toxicity can include:

Garlic or onion in powdered form is a lot more concentrated than eating it fresh. It only takes about 1/8 teaspoon to cause side effects in your cat.

If you like your beef jerky spicy, there is a wide range of brands that have marinated their jerky with chili. The more commonly used ingredients would be paprika, black pepper and jalapeños.

I like some heat in my food but it isn’t something that you want your cat to eat. Anything spicy is able to irritate your cat’s nose, eyes, mouth and digestive tract.

These ingredients aren’t toxic but they can cause a lot of pain and discomfort to your poor little kitty if you happen to feed beef jerky that is spicy.

The last thing that you want happening is for your cat to have explosive diarrhea from the spice. Cleaning up after your cat can make you gag. Trust me.

One flavor which seems to be gaining in popularity is teriyaki beef jerky. It is basically beef jerky that has been marinated in beef jerky sauce.

I wouldn’t be too keen on letting my cat eat this flavor as teriyaki sauce is made from soy sauce which is very high in salt. Teriyaki-flavored jerky might have more sodium than the original ones.

Furthermore, onion and garlic powder is widely used when making teriyaki sauce which is toxic to your cat. 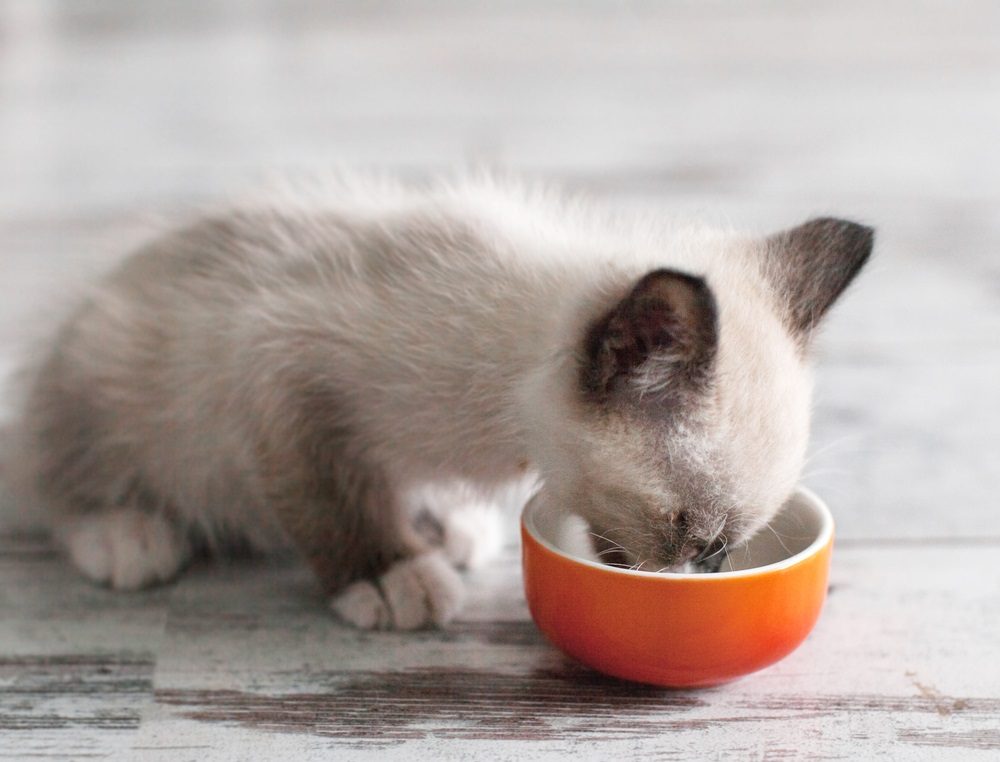 It isn’t healthy to let your kitten eat any form of jerky. Kittens are still very small and with sensitive digestive systems.

There’s no telling what kind of impact that amount of salt and other ingredients in the beef jerky can have on the kitten.

I wouldn’t recommend giving your kitten any form of human food until it has been on solid cat food for a few months.

What Should You Do If Your Cat Ate Beef Jerky?

If your cat has eaten some beef jerky, there’s no need to go into full panic mode just yet. The most important thing to note is how much beef jerky your cat age vs its weight.

If your full-grown adult cat just had a small bite, it should be fine without having any side effects. But if your green little kitten bit off more jerky than it can chew, you need to take it to the vet for an examination.

Your cat could be at risk of salt toxicity as well as food poisoning from the other ingredients.

What Are Other Healthier Alternatives To Beef Jerky?

Feeding your cat too much beef jerky that is commercially sold isn’t good. But what if your cat has a thing for dried meat?

You can consider the jerkies that are sold at pet stores. Most of them do not contain harmful ingredients and are safe for your cat.

But if you really want to control what goes into your cat jerky, it would be best to get a dehydrator and make your own.

You just have to make plain beef jerky or chicken jerky and your cat will be a happy camper. Do not add any salt to it but store the dried meat in an air-tight container.