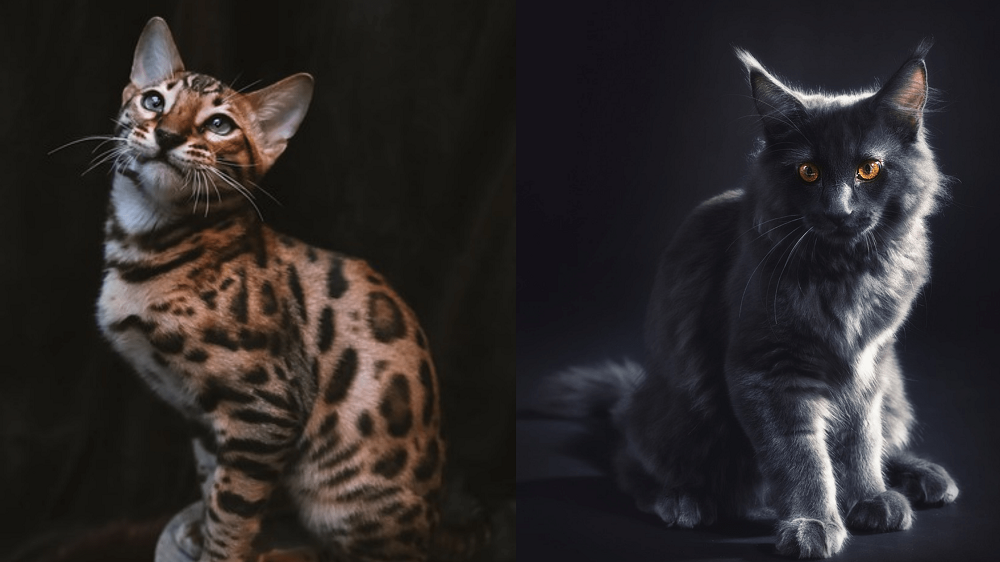 Do you know that there are more than 40 different recognized cat breeds in the world?

That’s a lot of options to choose from if you are looking for a purebred as a pet. There are two breeds that are popular with cat lovers, the Bengal cat and the Maine Coon.

In this article, we will be discussing the different aspects between the Bengal cat and Maine Coon.

If you are deciding between which of these two cats you should have as a pet, read on.

Every breed of cat has its own heritage and background which makes the breed unique. In this section, we will be discussing how the Maine Coon cat and Bengal cat came about.

Maine Coon cats are native to America. However, there are no compelling or conclusive records showing how this cat breed got to this continent.

There are several speculations though.

One of which involves the Queen of France, Marie Antoinette. She was trying to escape from her death sentence for high treason and sought the help of Samuel Clough who was the captain of a ship.

Unfortunately, she did not manage to escape successfully and was executed in 1793. However, her six cats made it to Wiscasset, Maine, with the captain’s help.

Her cats started to breed with other cats in Maine which started the bloodline of the Maine Coon that we know today.

The Bengal cat is also native to the United States and came about through the breeding of various domestic cats and the Asian Leopard cat.

A lady named Jean Mill was given credit for creating this exotic looking breed. She had an Asian Leopard cat and your usual tabby domestic cat who did the ‘horizontal tango’ and out came the Bengal cat.

However, the breeding of Bengal cats didn’t begin in earnest until the 1970s.

Each breed of cat has a number of physical attributes that makes them distinct. Just like everybody is able to tell a sausage dog apart from a bulldog. 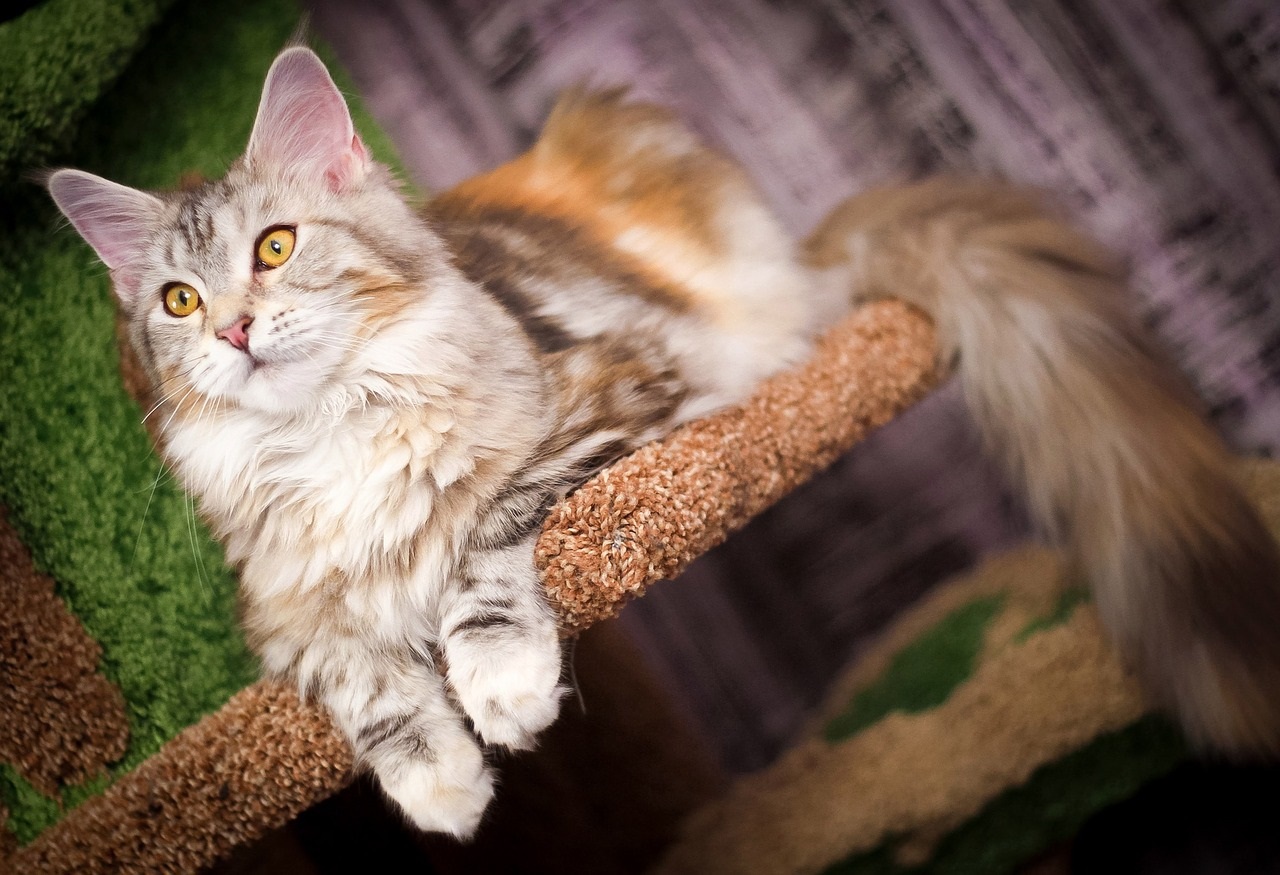 The Maine Coon cat breed is considered one of the largest domesticated cat breeds. A full-grown adult can weigh in between 15lbs-25lbs.

That’s quite a workout if your cat likes being carried around.

They take about 2-5 years to reach adulthood which is a lot longer as compared to your average cat (1 year).

Spotting a Maine Coon is easy with its fluffy ruff on its chest. It looks so soft and inviting that makes you want to touch it.

The ears are large, well-tufted and tapered at the end.

The coat of a Maine Coon is rather long, thick and luxurious. They also have long and bushy tails.

If you’re seeing a Bengal cat for the first time, you would probably think that a wild cat has escaped from the zoo.

Easily recognizable and well-known for its leopard spots, the Bengal is another popular cat breed.

Fully grown, it is not as large as a Maine Coon but it is still a rather large and muscular cat. The average weight of a Bengal is about 8lbs-15lbs.

They have a short, dense and luxurious fur coat that is accompanied by a medium-length and slender tail.

Besides the unique physical attributes of a cat, what about the personality of each breed?

Let’s take a look at the characteristics of these two domestic cats.

Maine Coons are called ‘gentle giants’ for a good reason. Despite their large size, they are extremely docile and affectionate cats.

A Maine Coon is also known for its intelligence, playfulness and loyalty.

Your Maine Coon might not be a total lap cat or snuggler but rest assured that it will always want to be near you. They like following their owners around the house and just being close to them.

Have I also mentioned that most Maine Coons are attracted to water?

Their fur coat is rather water-resistant which makes them less fearful of water compared to other domestic cats.

So don’t be surprised to find your Maine Coon drinking from the tap or joining you in the shower. 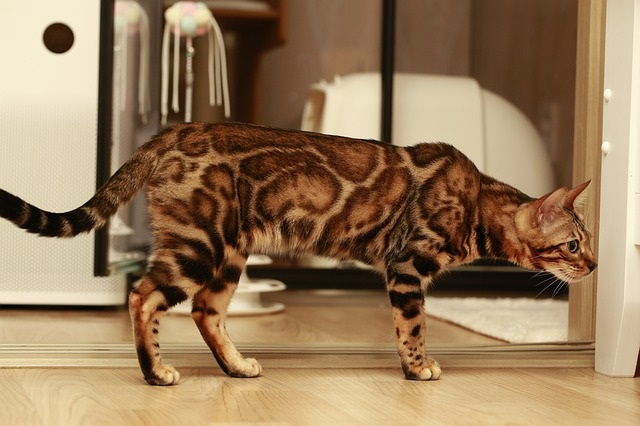 Bengal cats are known for their playfulness, agility and a healthy dose of feline curiosity. You’ll find them in nooks and crannies of your home that you never knew existed.

These are high-energy cats that require a lot of playtime and interaction to keep them mentally and physically satisfied.

You’ll never get bored watching a Bengal trying to entertain itself.

Bengal cats are also very affectionate cats and form a tight bond with their family members.

Both the Maine Coon and Bengal are water lovers. Hence it won’t be surprising to see your Bengal trying to turn on the tap or take a dip in the bathtub with you.

Cats in general require the same kind of care and maintenance. However certain breeds need a tad more special care than your average domestic cat.

Besides the basic essential items that all cat owners should have, a Maine Coon might need a larger than average litter box due to its size.

The cat might be leaving nasty surprises for you all over the house if it finds the litter box too small to use.

The Maine Coon is a long-haired cat thus it needs to be groomed on a regular basis. You will need to brush your cat daily or at least every other day to prevent matting.

Being active cats, Maine Coons do need a certain amount of playtime. They enjoy going for walks but make sure to secure them with a cat harness before doing so.

Last but not least, give your cat the best diet possible. Dry food or kibbles lack nutritional value and can cause long-term health issues.

Cats need a high-protein diet to thrive and the raw food diet comes the closest to their natural food source. The next best alternative would be feeding them good quality canned food.

Bengal cats can be rather demanding and attention-seeking for first-time cat owners. No doubt Bengals are very affectionate and loyal cats, but they still need a high level of stimulation.

The agile nature of the cats means they enjoy jumping, climbing and running. It would be best if you live in a bigger home that can accommodate such activity.

Some owners even build an enclosed outdoor playpen for their Bengal cats. As much as these cats need space, don’t let them roam freely outside unsupervised.

Bengals cats don’t require as much grooming as compared to Maine Coons as they are short-haired. Just a good brushing every few days would suffice.

There are some cat breeds that are prone to genetically induced conditions and ailments. It would be good to be aware of this before getting the cat.

Maine Coon cats are prone to the following genetic conditions:

Hip dysplasia occurs when the hip joint isn’t properly formed. This can cause the hip joints and bones to degenerate over time making it difficult for the cat to walk. About 23% of Maine Coons have this issue.

Feline Hypertrophic Cardiomyopathy is the condition whereby the walls of the heart are so thick that they can’t contract normally. This can result in heart failure in Maine Coon kittens.

Maine Coon breeders will usually test their cats for these conditions before putting them up for sale. If your Maine Coon is yet to be tested, please bring it to the vet to check.

There are two common health conditions that can affect Bengal cats.

PRA is the inevitable deterioration of the cat’s eyesight. This can be detected in kittens as young as 12 weeks old.

Bengals are also prone to Feline Hypertrophic Cardiomyopathy like Maine Coon cats. It can be cured by can be properly managed if diagnosed early by the vet.

Is A Bengal Cat Bigger Than A Maine Coon?

Bengal cats are smaller than Maine Coons. On average a Bengal weighs in at 8lbs-15lbs. Whereby Maine Coons on average can weigh 15lbs-25lbs.

Maine Coon cats can grow up to 40 inches long compared to 30 inches for the Bengal.

The Maine Coon has a clear size advantage over the Bengal.

Bengals are strong, athletic and agile cats based on their genetic makeup and can be stronger than most average cats.

However, compared to a Maine Coon, it is at a size disadvantage which probably makes the Maine Coon stronger than the Bengal.

As you can see both Maine Coon cats and Bengals are great cats to have in their own right. They both have their good and bad.

The most important aspect when it comes to getting a new cat is whether you, as the cat owner, can give the cat the best quality of life based on its requirements.

And not due to you wanting a certain cat breed just for the sake of wanting it.